A Boatload For the Wednesday Night Race! 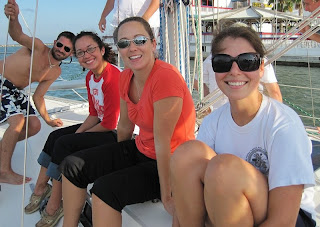 I wasn't sure I would be off in time to make it to this week's Wednesday night race. Bruce was not too happy about it as it was the first of the new Pursuit races with spinnaker division. The boat was full when I arrived. Brittney invited two friends from College, Marci and Krystal, and an old friend from San Antonio, Jeremy. 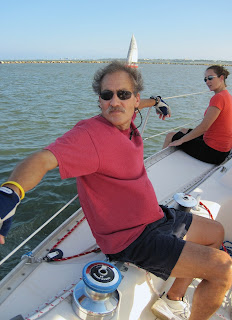 Bret began distracting me with some far fetched story until Bruce ordered me below to change so we could head to the start line. When I came back up, I was so happily surprised to find ROBERT! Standing in the cockpit!
It's been several weeks since we've seen him and Kathy and I was so happy he was out with us for a sail. We've missed him dearly. 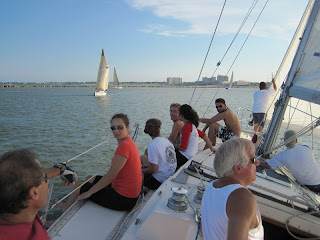 So off we went to join the other 10 boats out on this lovely evening. We had a boat load tonight! It was certainly perfect weather to take newbies out on the boat so as not to scare them off. 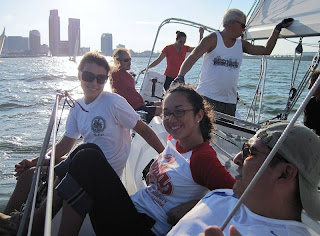 Brittney took her guests out on the rail and gave them all instructions on how to stay alive and out of the way. Once we got going on course, they were already well versed in what happens on a tack so I relaxed and enjoyed the ride. 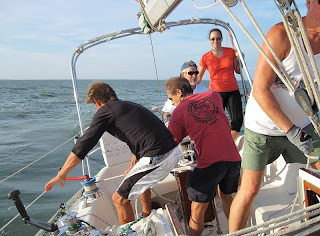 We had plenty of muscle in the cockpit with Clay, Jon and a first timer on our boat, Nick. It looked like they had it well in hand so I rode the rail with the kids. 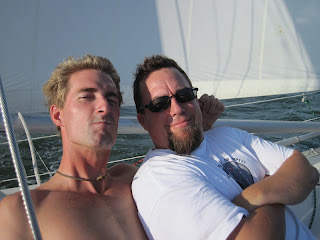 I'm not sure what's going on here, but I got it on digital. I knew from the beginning that Clay and Brett would hit it off... I just had no idea how well..... 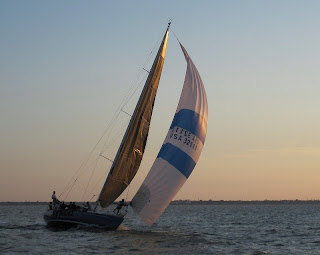 The race course was out to #71, then over to #19 and home. We did OK on the first leg. Made some time on a few boats... After rounding #71, we had planned to put up our spinnaker but upon review, it looked like the boats in front of us were having a hard time carrying the big sails. 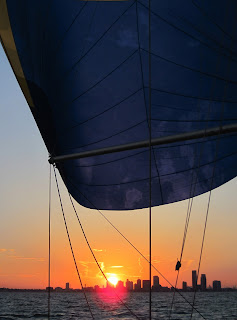 We were doing over 6 knots and closer to 7 with just the main and jib with no drama, so we decided to hold what we had and put up the kite after rounding #19 for the last leg before home. Clay took the guys under his wing and got the foredeck going... after a bit of a snafu... But HEY, we've never practiced this before. 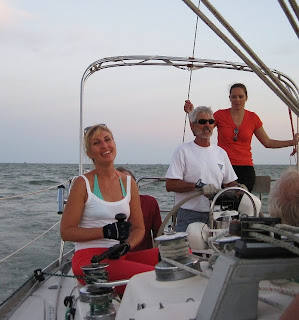 It wasn't too long before the chute was flying high and beautiful towards the sun setting on our city. Somehow I got pressed into actual service. Clay's Krystal wasn't with us and trimming the sheet has become her job, but fell to me in her absence. I enjoy doing it and I think I do an OK job of it, but it sure is hard on the neck. And the spinnaker knows if you look away for a second! 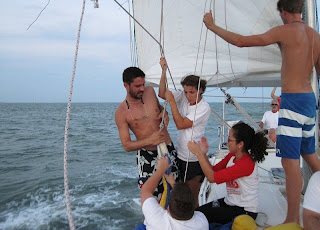 We enjoyed our short run and none more than Bruce behind the wheel. He was like a little boy surfing those waves. I was very glad of the opportunity to fly the chute for our prospective new crew members so that we could show them how much fun it could be. All too soon it was time to bring it down. Brittney rounded up her crew for the take down. There was a bit of drama with a reluctant halyard, but it came down without going into the Bay. 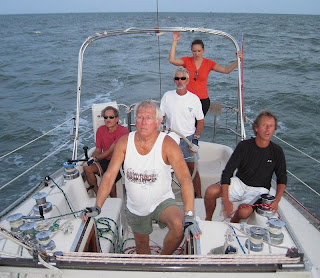 We finished it off with only Pazuzu still out behind us. We had made good speed, but the other boats were faster tonight. All this did to our crew was to light a fire under them and we finished the race with talk of "practice" and "we'll show 'em next time".
We had a grand time, laughter reigned supreme and nobody got hurt! I call that a success! Sure we've got room for improvement but that only gives us a goal! Later, after everyone had left the boat. Bruce told me that he had more fun tonight than he's had in a long time. And that's a pretty high bar to top. Thanks to our crew members new and old for making our day!