One of Our LESS Forgettable Wednesday Night Races 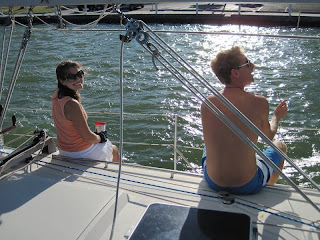 I was so ready for this afternoon! I wasn't sure I would be able to get away from work but since we're trying to do only the first and third Wednesday races now, I just had to make it. We've been running ragged with all the weekday and weekend races this past year. Bruce has decided to cut back and just do the WNR's with the pursuit starts. Brittney was there but Matt had to work a bit late. Brett was able to rearrange his schedule this year so he'll be making more WNRs. 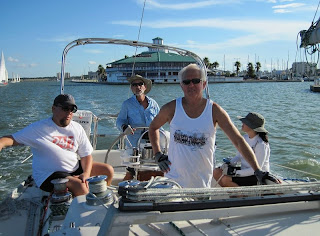 We had our newest crew member, Jon, along with Clay and Krystal come out tonight. There were 17 boats milling around the start area. I think the pursuit starts are really catching on. 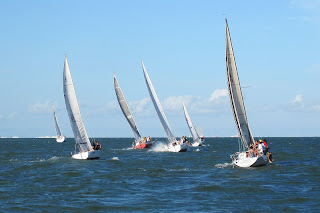 We were in the middle of the pack with sails out in front of us dashing around the markers at the gap... 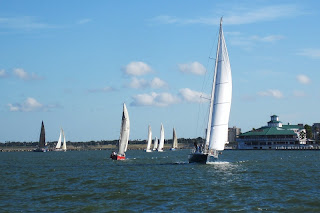 And another bunch behind us just starting. The winds were perfect at around 15 kts. out of the East. Imagine that... 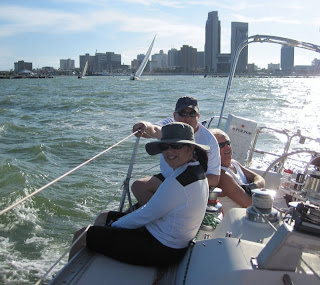 Brittney was helping Brett with foredeck while the Watsons manned the cockpit. My job was official photographer and rail fluff. Just look at those smiling faces! 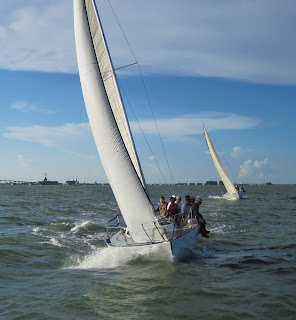 The pursuit starts are fun in that we get to be more in the middle of the fleet. Many times on nights when we do the standard 4 start races, we hardly see another boat. 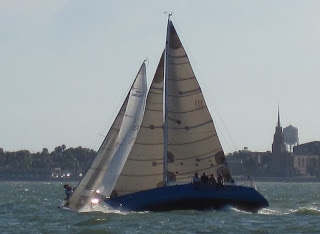 This way, we're in the thick of it. We get to see the close calls... 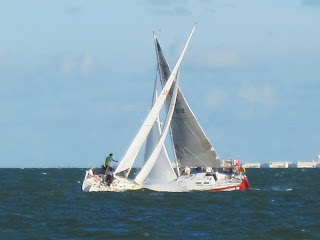 and the near misses... 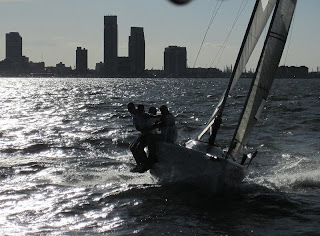 And the cool shots that only the lucky few are privy to.
As we neared the marker #71, the upwind mark, it was cool to see all of the sailboats converging. 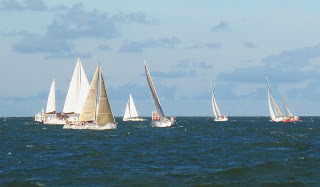 We had fallen back in the pack and had made an unfortunate short tack. We would need to make another two tacks to make the mark. Passion was coming like a freight train from behind as we neared the mark and it was close as to whether or not we would make it. 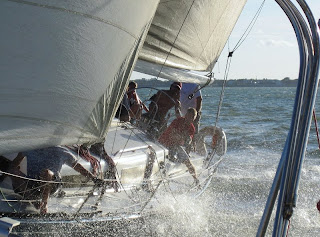 We were short! We would have to take that tack. Passion was just about here... we came up to our lay line and tacked. The crew were scrambling and at the last possible moment we slammed over right in front of Passion. We braced for the crash as we watched the guy in the left foreground tumble to the lifeline and catch himself just in time before he was tossed overboard in the churning water between our two boats! Steve managed to avoid us and we scrambled to get back on course and follow them to round the mark.
Most of the fleet was already strung out on the way to the finish. I love a parade!

I guess our handicapper has some work to do to tighten up this string. Although, maybe it would be better to have the crashing action out in the Bay as opposed to at the gap or the finish. Fewer witnesses that way. 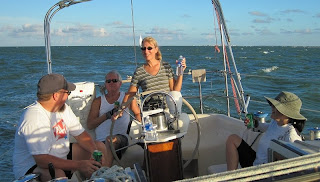 As usual, I got to sail the downwind leg and finish the race as we crossed the line 15th overall. Oh well... you can't always win. We had a fabulous and exciting time out there. What a way to break up a week. Thanks Watsons young and old for handling the cockpit so that I could play on the rail. It was quite an unforgettable Wednesday night race!
PS Bruce went to the social with the intention of apologizing to Steve about crash tacking right in front of him. Steve apologized to Bruce for altering course at the last minute which threw a monkey wrench into Bruce's plan. You just never know with sailboat racing...