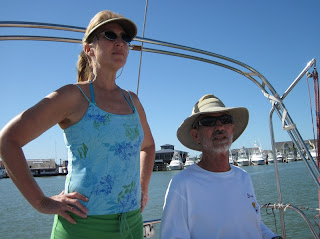 Once we got our young crew up from their bunks after a late night out in Port A, and those who had gone home for the night had returned... we quickly got the boat ready and set out from the Port A Marina to find the starting line. The instructions were vague. The starting line was straight across the channel from the observation deck. We Were ready and were in fine position when our starting flag dropped. 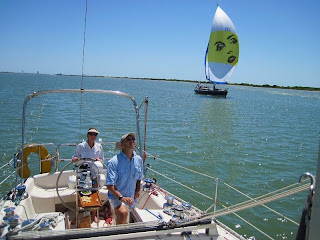 Un- fortunately, the committee's opinion of "straight across" and ours differed widely. We were over early! This means we had to turn back and make our way back to the real start line and cross again after the flag. This cost us mega-time! And we still weren't sure we had the right start line! Our strategy was to hug the red side of the channel as much as our draft allowed in order to avoid the ripping 2-3 kt current against us in the middle of the channel. We made our way past boat after boat. We got far ahead and there were few boats that caught us. Here is Passion with their "Marilyn" spinnaker flying proudly as they creep up the channel behind us. 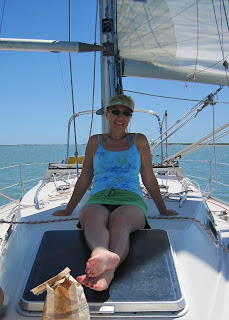 I took the opportunity for a break in the shade. It was hot with very little wind at all, and going with it made it seem altogether still. After a while at the helm with the sun beating down, I welcomed the shade of the sails on deck. 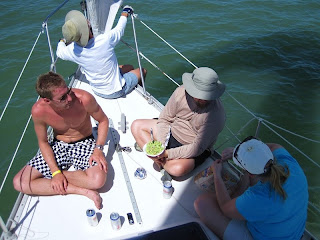 There wasn't' much for the crew to do. We brought out the munchies as we neared the point where we would (hopefully) sail out into the bay. 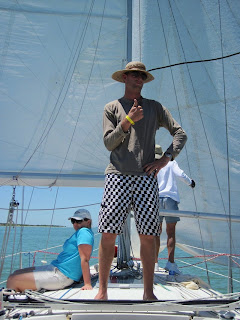 Things were beginning to be a bit ridiculous! We looked behind us and saw that at this point, there were several boats that had dropped sails and were motoring towards home. It seemed as if there was no hope for a breeze. Just then, we got a breath and picked up speed enough to take us off towards marker #5. 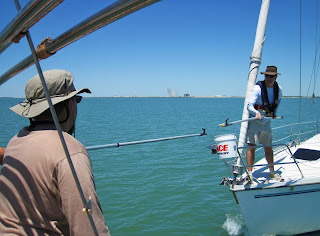 The winds died down before we got there however and things looked very bleak. We were down to our last two beers. This could be the end... our very own "Three Hour Tour"... We heard the sound of an engine coming up behind us. Is it a dream? No, it's friend Larry on Windswept threatening to take our beer! Oh No Larry, we have none! What, says he... I have plenty and will lend the some. And so a plot was hatched to load the beer into a bucket and pass it from his boat to ours. The young ones were perked up with interest. We took delivery, said our thanks and good byes and Windswept motored on towards home and air conditioning... 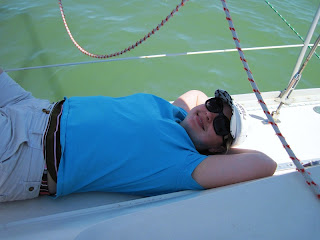 Our spirits soared for a while. We had libations and a tight race with the little IC boat that had plagued us throughout the race today. It looked as if we would (eventually) make the mark before they did. The excitement soon passed however and our crew took to the deck. 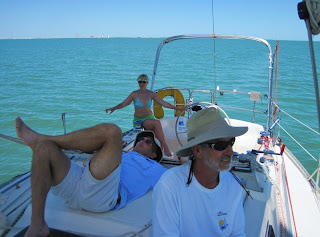 Even die hard Steve was laid low by the ennui. This kind of "racing" if you can still call it that, is excruciating. 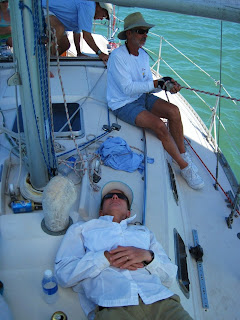 I took the helm to give poor Jacque a break. She took to this "breaking" right away. And she had no beer at all! 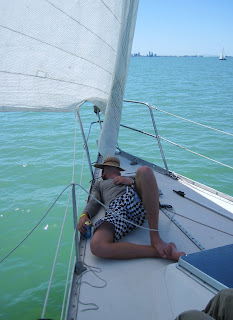 The best was young Brett... recovering from his night abroad in Port A. It was the perfect kind of race day for him. We spent hours... 6 + hours on the bay that day. Many boats dropped out. A few stayed the course and finished the race. There have been more strenuous trials, but few more trying. 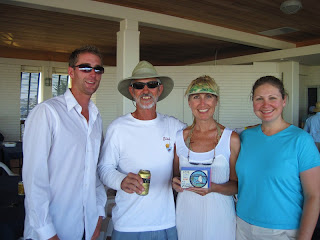 We ended up with a solid third place in the end. We were happy to be one of the elite few who had finished the race. Sometimes you've just gotta take the long way home.