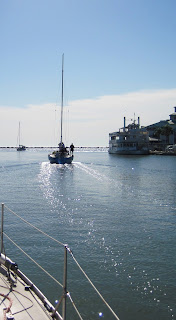 We were both excited to be doing the Annual CCYC Port A Regatta this year. Bruce had prepared the boat last year and then had back trouble which caused us to miss it. He was ready as we motored out of the slip... all the "non-essential" items had been offloaded. It was a beautiful crisp morning and promised to be perfect for sailing to Port A. 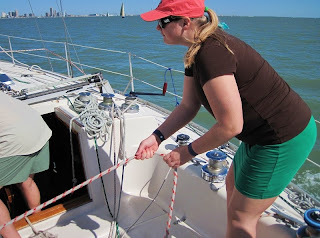 Bruce had watched the weather reports all week and early on we expected light winds, then the forecast cranked up a bit so Bruce chose to forgo flying the spinnaker. This turned out to be a bit of a mistake as we would have used it both days. We went out to the starting line and cruised around to test the winds. Melissa assumed her job early on. We'll make a sailor out of her yet! 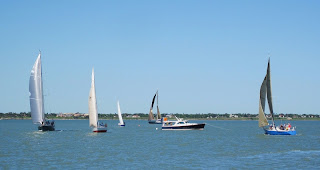 The start was exciting! There were 8 boats in our start and we were in a fabulous position. It's difficult to get great start pictures sometimes as Bruce makes me work, but this was our gracious committee boat. 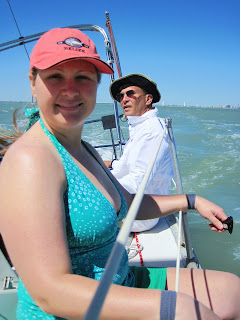 We were all enjoying the race and the guys never stopped tweaking the sails to get every little bit of speed they could. Unfortunately, by the time we had rounded the Bay marks and made it to the Channel, we had allowed our competition to get ahead. This was partly due to a bad call on a tack. Oh well, that's sailboat racing. 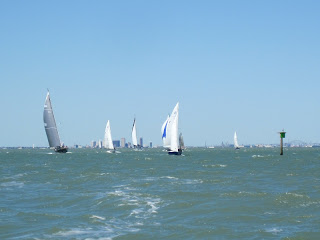 We had the pack closing in on us and we watched as the spinnaker fleet caught up and passed us in the Channel. 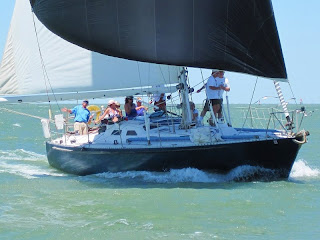 It's not usually much fun to be passed, but knowing that they were not our competition softened the blow. We waived as our friends ripped by us under the giant spinnakers! 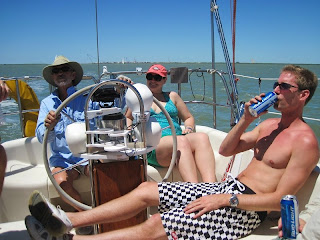 Once safely into the Channel, there really wasn't much to do. The crew broke out the chips and "boat chicken" and chowed down. This attracted a flock of seagulls. These creatures have an uncanny ability to locate fried chicken. We finished our lunch and kicked back to enjoy a very nice sailboat ride. 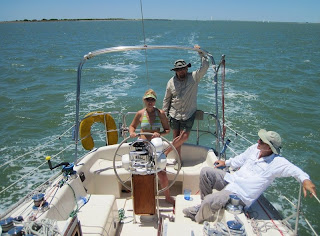 We finished 5th. Not such a great showing, but we had fun. No sour grapes here! So much for offloading all of the water and amenities.

Much of our crew left for Corpus Christi after we docked. No reason to wait around for the awards when we weren't getting one. Bruce, Melissa, Brett and I stayed for the festivities. There was the usual CCYC catered party with live music and dinner. The food was mediocre but plentiful. 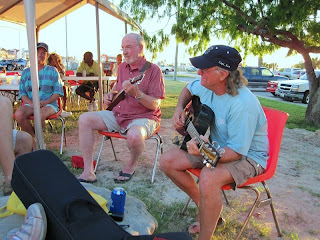 Coinci- dentally, there was a "dock party" going on as well in Port A. The local marina tenants were having a pot luck party that looked like a lot more fun... so we joined them. We knew many of these people as we used to keep our boat in Port A. We were warmly welcomed and enjoyed the impromptu jam session. There were several tenants who played various instruments. They were all very good! 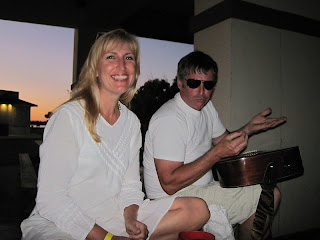 We moved our party over to the Pavilion once the Port A Regatta party broke up. I became a groupie as I had nothing musical to contribute. They weren't opposed... 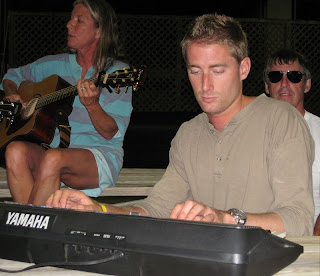 My crew, however... did have some musical talent. Brett was offered a guitar and he took it right up. Then out came the keyboard, and he tried his hand(s) at that as well. 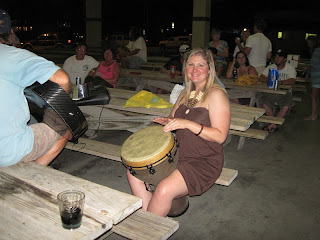 Everyone got in on the jammin'! Melissa got brave and grabbed the bongo. She did a marvelous job too! It was such a treat. We had no idea that our evening would turn out so well. We knew that some of our dock mates played guitar, but when we kept our boat here, we were always in bed long before these musical interludes began. We never knew what we were missing! The party broke up at about 11 pm and the young 'uns, Melissa and Brett left for the bars. We never heard them come in but reports in the morning were of a fabulous time being had by all.