Mini Vacation in May 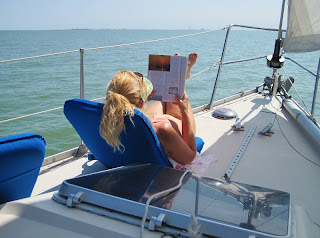 My Practice just bought a huge new Practice Manage- ment and Electronic Medical Records system called NextGen. We have months of implementation ahead and I will have lots of job stress getting it all done. I decided to take an extra day off this weekend. We did the chores on Saturday and when Sunday came, off we went on the boat across the bay. 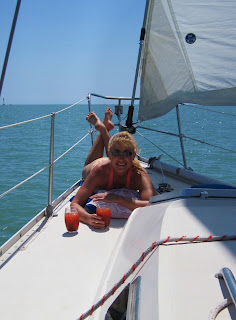 We could not have asked for better weather. I always worry that the winds won't cooperate with us when I have a day off. It's a shame to waste a day on bad weather. But... we really got lucky this day. The winds were light and the Bay was calm. Just enough breeze to carry us across, but not enough to spill the Bloody Marys. 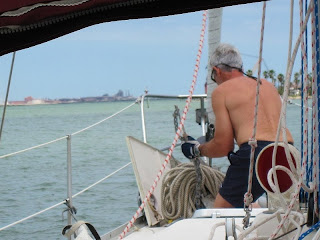 Our destination was Ingleside Cove. We relaxed our way there and made our entrance. Bruce prepared to drop anchor while I guided the boat in through the invisible entrance off of the La Quinta Channel. 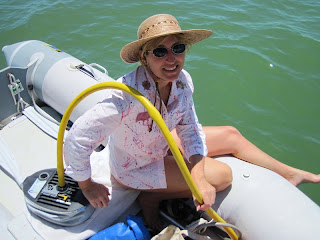 The first thing we did was to top off the air in the dinghy. There is evidently a leak somewhere. Bruce happily handed me the manual air pump. 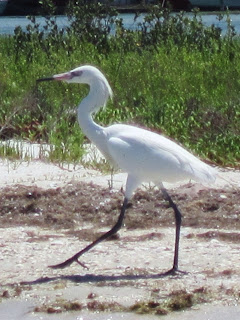 We rode over to Cook's Island. It's a tiny little spit of land teaming with birds. Always a treat to get a close up look at these beauties. 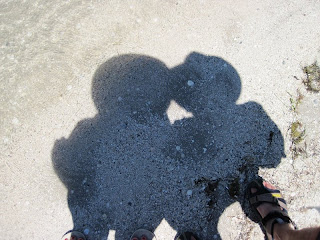 We took a long walk along the tiny sandy beach. 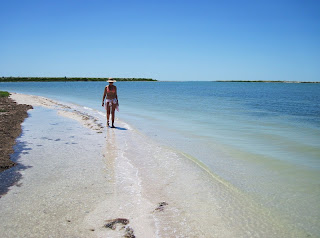 The surprisingly clear water lapped gently at our feet. 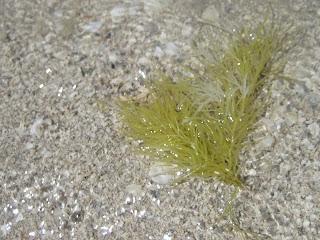 I love to look closely at what's around me out there. You never know what natural treasure you will find. The beauty of a scrap of water flora... 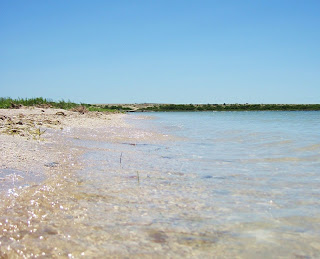 The tinkling sound made by the shells as the tiny waves roll them in and out... 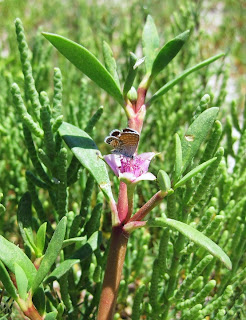 The lucky chance of catching a moth landing on the flower just as I focused for a shot... 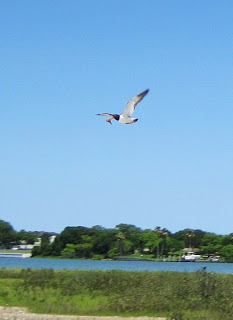 The sight of a gull picking up a hermit crab, shell and all, and flying off to find a safe spot to pick the crab out in peace... 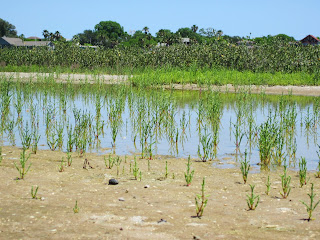 The still order of the grasses growing beside a brackish pond... 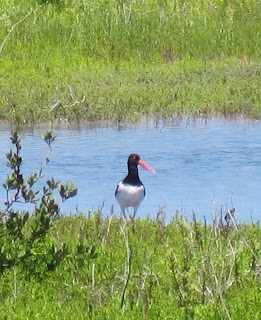 The sight of the birds in their natural habitat, nesting and pairing up... 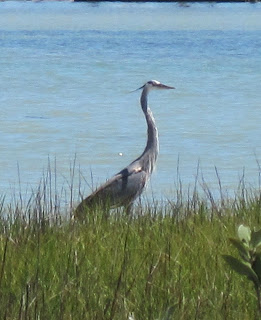 The majestic pride of the master of his domaine strutting his stuff... 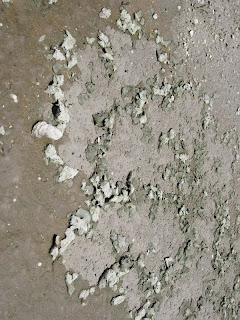 The random beauty of mud... 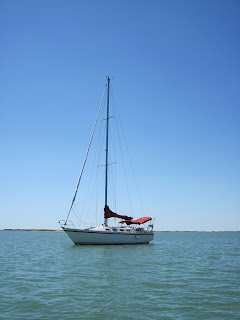 We had our fill of it all and turned back towards our boat, waiting quietly at anchor in this lonely cove. 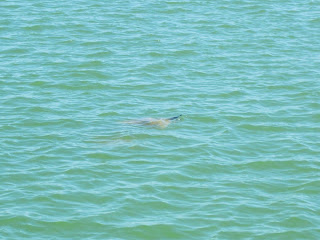 There was more waiting there for us. We were curious to see what was causing all the commotion in the water. We looked to find these rays. There were three of them drifting one below the other. We have seen more of them this year already than we ever have in the Bay. 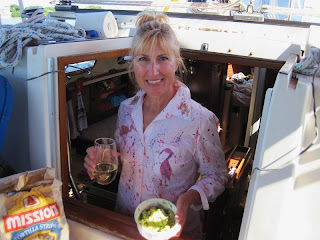 I made us a snack of my fav de jour... mango guacamole. We kicked back in the cockpit to read. 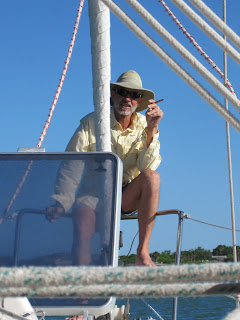 Bruce even took this opportunity to have a cigar. It's difficult to find a smoking spot on a 36 ft boat. He didn't have to go to the ends of the earth, I don't mind the cigar smell... but he insists as if it's part of the guilty pleasure of it. 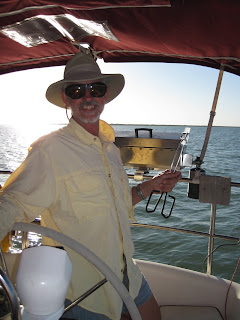 Somehow, the time passed on to dinner time. Bruce fired up the grill and made us a lovely tuna dinner. 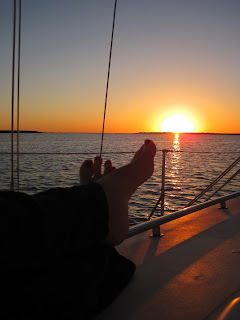 We ate and lazed around with full tummies as we watched another perfect sunset on the water. We passed a peaceful night with no mosquitos. 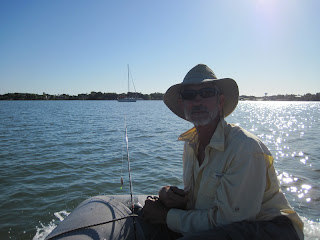 The next morning, Monday... when my co-workers were heading off to work and I was not... we took a dinghy ride around the cove to check out the fishing prospects. 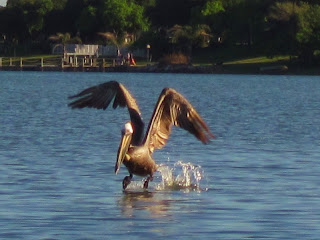 I wouldn't say there was much going on as far as fishing goes for us, but the pelicans were having lots of luck! Once again, it was such a thrill to be out amongst these beautiful creatures as they went about their everyday routine. 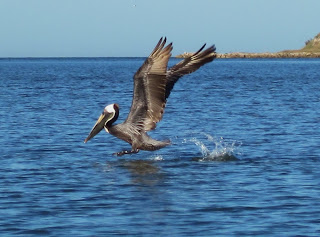 We sat in the dinghy watching in fascination as they plopped into the water, waited while the water drained out of their bills leaving only the fish to be tossed back into their gullets. Then, with a wiggle of the tail feather, it's off to the sky to spot another unsuspecting fish so they can do it all again. 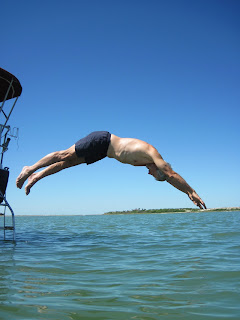 It grew warm as the sun rose on our cove. The next thing on our agenda was a swim off the stern ladder. Bruce is like a fish in the water and has no qualms about diving in. It makes me nervous however, so he doesn't do it often. I caught him in mid dive here. 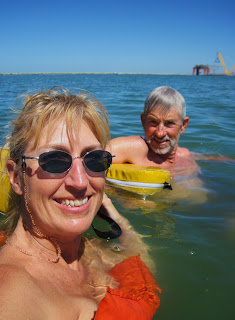 The water was nice and cool. We floated around like the only two people in the world for a while. 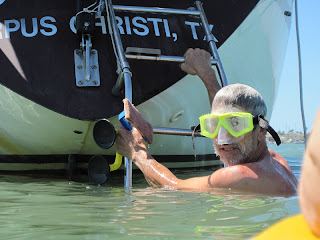 Of course, Bruce can't stand too much relaxation... he had to be doing something. He went to work on a quick "Bot- tom Job". He worked his way around the entire boat with his scrubber. I'm just glad he doesn't expect me to do it. It's my Maycation! 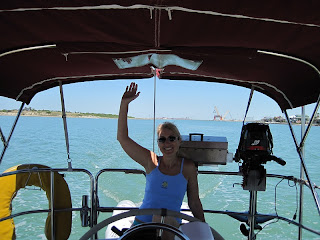 As always, all good things must come to an end. We had to head for home. We said our goodbyes to our idillic two days as we motored out of the cove towards the Bay and home. It was everything I needed and more. 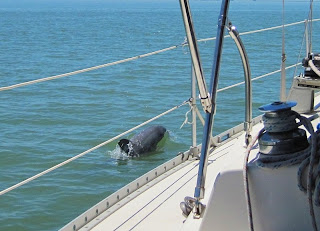 The winds were so light we ended up motoring for a bit. We had a dolphin show as we passed the area around marker 43. They were everywhere in groups of 6 or more. The water was very clear so we got a boost of "dolphin joie de vie" to carry us to the end of our day.