Lago Patillas From The Kayak

We woke up this morning and stretched our groggy limbs... "What should we do today?" I asked Bruce.  "Hmm, I could work on changing the bicycle tire and go for a ride." 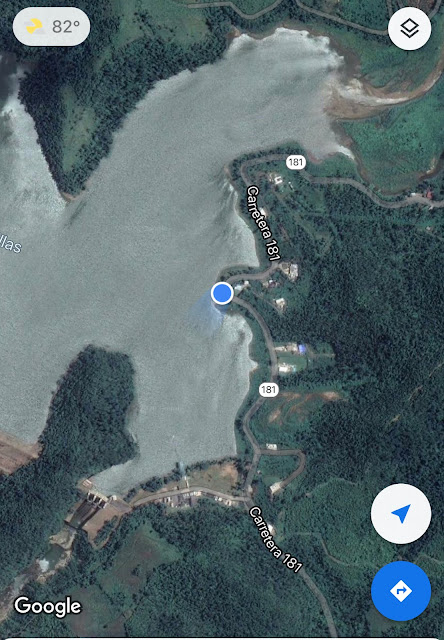 Rejecting that idea immediately, I suggested a far more fun thing to do... Let's go see if we can find a way to get our kayak onto Lago Patillas!  No argument from Bruce!

We bought this little kayak and I thought it would be flimsy because it was really inexpensive. But it's really very well made and we're super excited to get it out and see where it can take us!

This lake is just 20 minutes up highway 181 into the mountains.

We've passed it many times, and knew that there were a few spots where we've seen cars pulled over beside the lake. We've seen fishermen out there, and kayakers as well... But there is limited access from the road to the water's edge.  One spot looked like it might be better than the others, but the dirt path disappeared down the embankment so we weren't sure we would be to get down there with the car.

No way to find out besides just taking the plunge!  Happily, it ended with the discovery of a very handy way to get our kayak to the lake~ 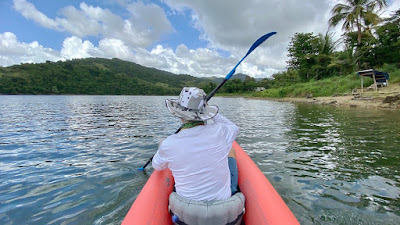 This is the second time we've used the kayak, and today we've added our new fanny pack PFDs. Now we're ready to explore!

Being unsure about the mountain wind currents, we set off with the wind in our faces.  Long years on the water have taught us to read the water's surface to see where the wind gusts are, and which direction they're blowing.  As expected, the winds are very quirky and unpredictable as they come down off of the higher mountains through the passes.  Once I even saw a puff on the water's surface that came directly down and fanned out in all directions!  No way to work with that!

But as unpredictable as the winds were, they were not strong, and caused us very little difficulty as we paddled along the shoreline. 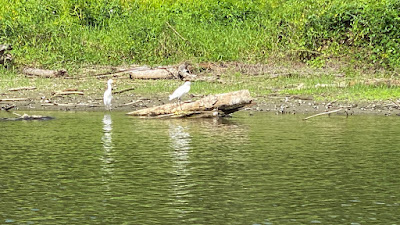 While we are hoping to get some exercise, we aren't crazy about it... And quality of experience is more important to us today.

We alternated between paddling along, and coasting so that we could sneak quietly up on the wildlife living along the banks of the lake.

Birds, iguana, multitudes of turtles, and even a couple of cows were our entertainment today. 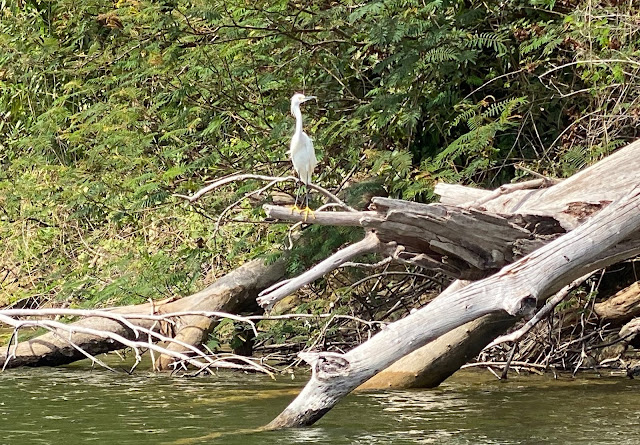 We paddled along, sometimes against the wind, but mostly not.  It was quiet and peaceful, the sound of many birds in the trees providing us with nature's music.  The water was cool, but not cold, and the passing clouds kept us from being too warm.  Conditions were pretty much as perfect as one could ask for.

After about two hours exploring from the eastern shore north, and all along that shore to the western bank, we decided we should head for the car.  That meant paddling right across the middle of the lake, where the winds were bound to get us.  But, the alternative, backtracking or continuing on along the shore, would take quite a bit longer.  So off we went, paddling hard when the gusts hit us.


It's easy to see the rain coming as it drops a veil across the mountains.  We knew we were going to get it... question is, how much wind will there be? We paddled like mad as the first raindrops began to pelt our heads!  Thankfully, there wasn't any wind in this little squall, and it actually added an extra layer of fun to our adventure.  We were dressed for wetness... so who cares where the water comes from???

The rain came, and the rain went, and we were still paddling hard to get back to our car.  Our little kayak does a wonderful job of gliding across the water, but we had those gusty winds to contend with... and yet ANOTHER squall fast approaching.  If we paddle like the devil is chasing us, maybe we can make it to shore before this one hits!


Nope.  We can not.  ALMOST!  But it was such fun, rain or no rain.  We reached the eastern bank just as the rain stopped.  In the steamy sun, we removed our gear from the kayak, flipped it over to remove the fin, then drained the remaining water out.  It's very lightweight and we carried it up onto the grass.

We never want to put it away wet, so I towel dried it and we deflated and rolled it up, then I changed clothes and laid my wet stuff on top of the car to dry while Bruce finished packing.  Before we were ready to go, one more passing shower threatened to undo all the drying my clothes had achieved...

From doorstep to doorstep, we had spent five hours in all.  Nice way to spend a day!  We drove our tired bodies back home for a brief rest before we joined our friends on the dock of the bay for sundowners.  All in all, not a bad life!  Goodnight sun, thanks for a great day! 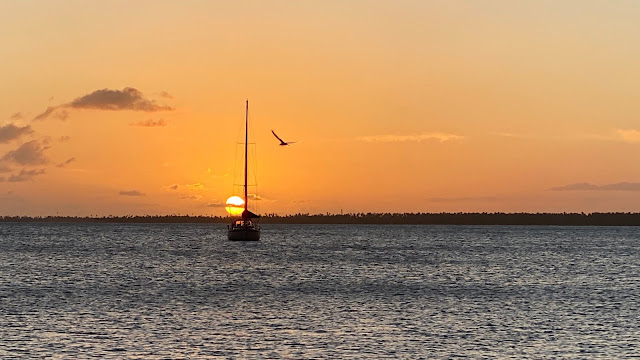