Since moving to our new home here in the little southern coastal town of Arroyo, Puerto Rico, we have been actively looking for ways to immerse ourselves in the culture.  I keep my eyes peeled for nearby events, and it's always a special treat when something pops up here in our town!  I have to tell you that getting definitive information about anything on this island is a challenge... right down to the start time of the Carnival Parade!

The publications I could find seemed to indicate that it was to begin at 6pm, but when I saw a chance post on Facebook about the roads having been closed at 1pm... we jumped in the car and raced down to the old town thinking we had already missed it... Only to find that it didn't start until 2... or maybe it was 3pm. (The policemen didn't even know the start time)  Whatever!  We're here and we're ready!  We parked several blocks away from the Malecon, and walked down to find a shady spot right at the beginning of the Malecon street, where the parade would surely slow down for us to get a good look.

In the end, it turned out that we were more than two hours early, but we were happy sitting in the cool shade of a giant tree, enjoying the people-watching, and chatting with our fellow Arroyaños!


As we sat there on the curb, the breeze freshened and I went looking for the cause.  Of course it would rain!  The crowds behind us ran for the shelter of the vacant building across the street.  We held our position, having thought ahead and brought our umbrellas!  We made ourselves a little shelter and never budged!  We didn't want to give up our primo spot! 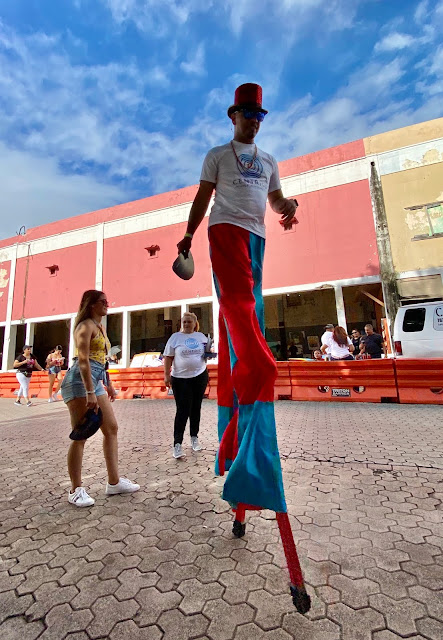 Watching eagerly for any sign that the parade was on the way, we wondered if the rain had caused a postponement.  In the end, it turned out that we could easily have wandered the Malecon for a couple of hours before settling, and still had a good position from which to watch the festivities... but at least this way, I didn't spend any money!

Finally!  The policemen began to settle into position and we knew that the parade was about to reach us!  Curiously enough, the crowds never seemed to get out of the way!  There were people walking between parade entrants and alongside the route that were in no way connected to the parade!  The police stood watch to keep things civil, although I can't imagine it being any other way... But they never really did much in the way of crowd control.  There are just NO RULES here in Puerto Rico!

So, without further ado, sit back and enjoy the parade with us!  We are proud of our little town for producing such a wonderful little piece of cultural enrichment! 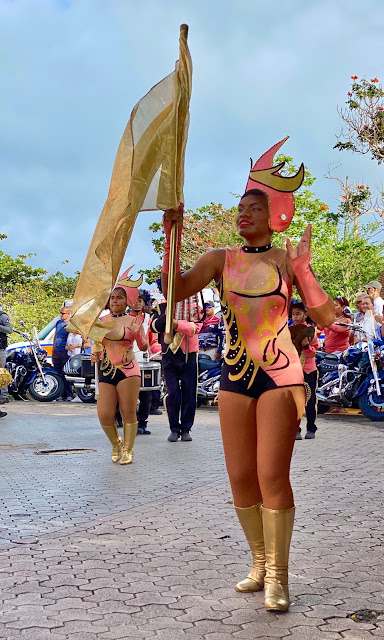 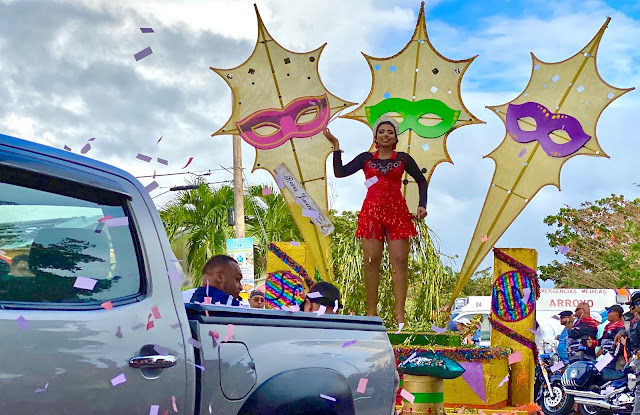 I think the judging was just down the street to our left, so the floats and groups would make the turn to our right, and then very often, pause for a long while.  We got a good look at all of the entries!

Carnival can be a bit "risqué", but so far, I was very impressed by the fact that the costumes all seemed to be somewhat conservative.  I guess that's the small town mentality coming out...

Imagine my surprise when the float above came around the corner and stopped.  That woman seemed completely unfazed by the fact that her float was just sitting stationary for all of these crowds to gawk...

But you know what?  There wasn't even the faintest stir amongst the crowds.  That's just my American Prudishness speaking! 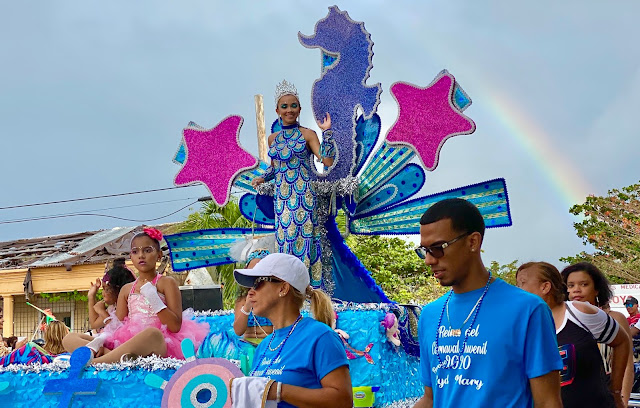 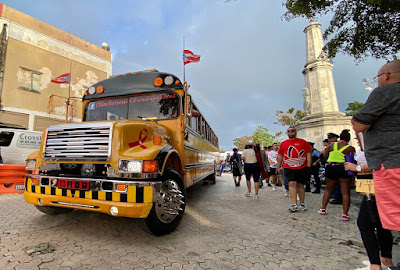 No event in Puerto Rico is complete without the Chinchorreo Buses!  These busses collect groups of people, and take them around different areas of the island, mostly on Sundays, to visit the many small bar/restaurants for a fun day of music, food and drink!  They're always brightly lit with flashing lights, and often have music blasting from inside.  They're very festive! 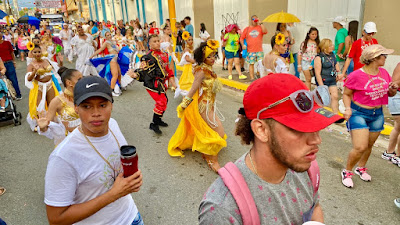 Things kind of slowed down after the bus passed, and all we saw coming were people just walking up the street.  Thinking the parade was over, we got up and began the walk back to the car.  Crowds of people streamed up the street toward the Malecon, and against us.  But wait!  The parade wasn't QUITE over yet! 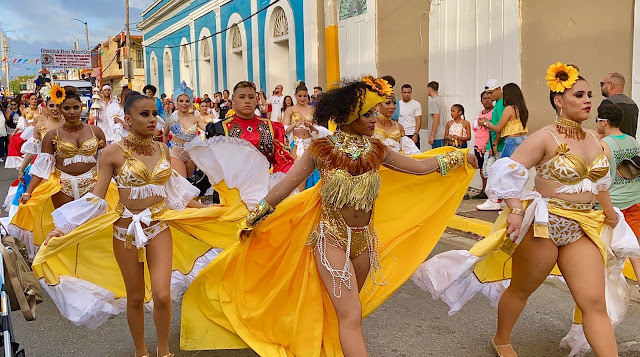 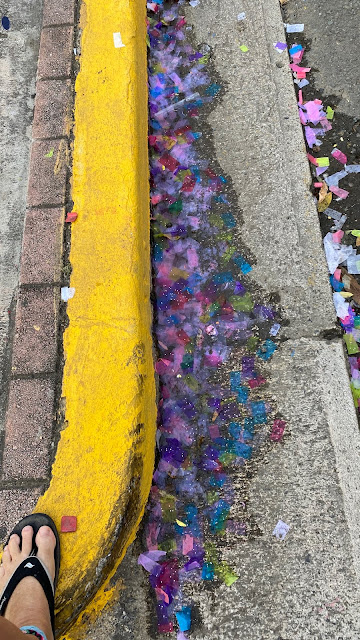 Yes, we were BLASTED by that one last truck!  But what a joyous crowd!  We were overwhelmed by the sheer happiness of it all!  These people, they are just out here enjoying family, friends, food and island life in general.  We so love our little old town!  It's like going back in time to when things were slower, and more simple.  How did we get so lucky?  I will never know!