From Dentist, to Discovery! How Arroyo Got Its Name 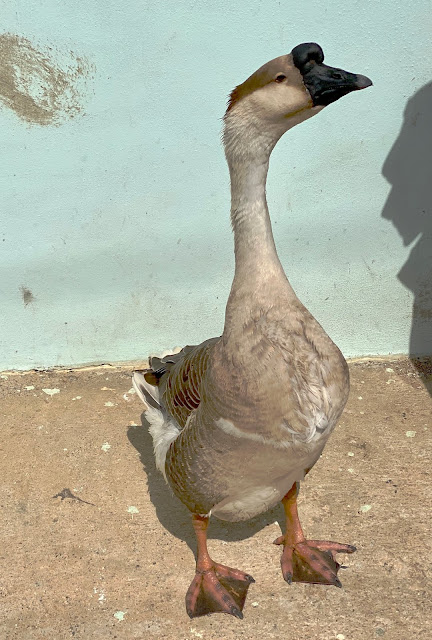 Seriously. We never know how a day will turn out, even when we set out to do something as mundane as visiting the dentist! We expect to spend quite some time in the waiting area any time we visit a medical office. So with a clear schedule, we made ourselves comfortable with the other patients this particular morning. An elderly gentleman stuck up a conversation with us in English! Always welcoming of conversation, we quickly became friends! Our new friend spent 50 years as a New York Cab Driver, and recently retired back to the place of his birth. He was having difficulty completing the patient intake form, so I went over to sit by him so that I could help. He was so friendly and rather comical, and before I knew it, I was offering to drive him home after his exam! And so it was, we went off on a new exploration of our town! 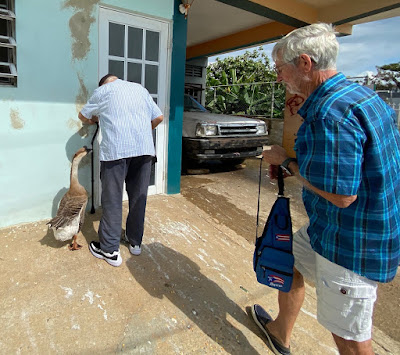 Mr. L directed us to his home, quite well for someone 85 years of age!  Seeing how far it actually was, we marveled that he was able to walk all that way in the first place!  When we arrived to his apartment, he insisted that we come in and meet his goose, Pepe! Yes please!


It's moments like these that make me just marvel at where life takes us some days! We made sure that Mr. L was settled, and promised to check on him now and then.  I even gave him my phone number so that we could help if he needed something.  We said our goodbyes, and   headed for home... But then this happened!

We've passed this place a couple of times, and I always wondered what it was. Why not stop and take a look around? 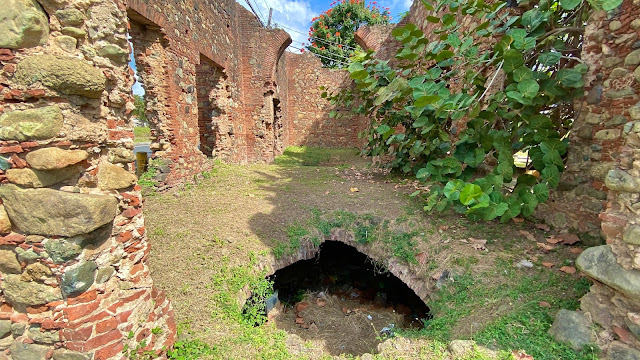 Imagine my surprise, when we peered inside of this old structure, only to find that the dirt floors inside were built over what looked to be a series of cellars.  On two ends of the room, the cellar ceilings had collapsed, exposing a room lined with brick down below. How cool is that??? 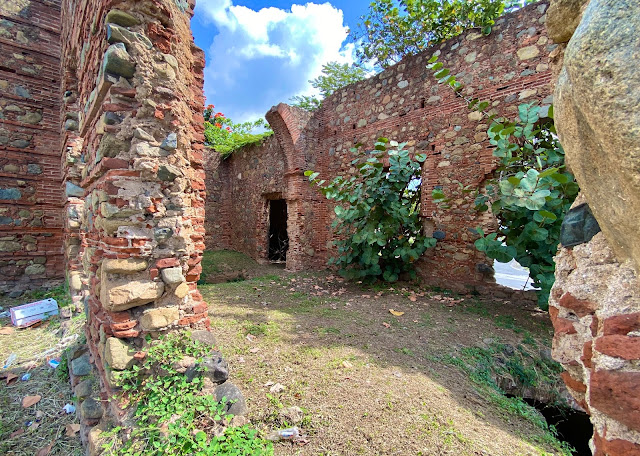 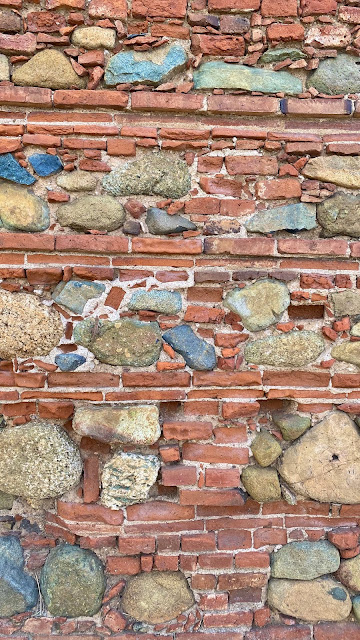 We continued to walk around the outside perimeter, simply amazed at the construction of this place.  It was almost like the builders just used whatever was at hand to throw these walls together.

After finding this place, I went in search of information.  I wanted to discover what the old building was, and maybe when it was built.  This video is the first thing I found, but it's all in Spanish!


Translated by my friend...  Thanks Terri!

“The Ruins of the Old Church in Arroyo, is the historical monument where it is believed, the first town began. This old structure is located on Highway # 753, between the Lafayette Central Sector and the Marín Neighborhood. According to the historian Cristóbal Sánchez, in his First Historical Primer of Arroyo, this structure belonged to Mrs. Juana Rodríguez Rivera, a wealthy landowner, who sent her to build to satisfy her “spiritual needs” and bury her family members. For unknown reasons, Mrs. Juana left Puerto Rico before finishing the chapel, back in 1849.
Some people say that near this place there was a small wooden bridge known as Boquita de Arroyo. Under that bridge passed a stream, where people traveling stopped to rest. In this place they drank fresh water since the other nearby waters were brackish.
Thus the site gained fame for its water. By use and custom, the place was called "El Arroyo". In this way, the Town of Arroyo inherits its name.” 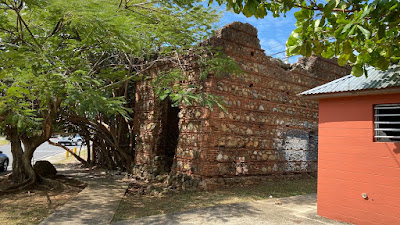 So now I know that it is very likely that this site was was where our little town of Arroyo derived its name!  Thinking about our visit there, I remembered that we also walked around behind this structure.  There's a little park back there with a fence running alongside the walkway.  Behind that fence is... The Arroyo!  We found it!

What an amazing turn of events.  Every time we walk outside our front door, we find new reasons to love our new home.  Our island is full of secrets and surprises enough to keep us busy for years to come.

If you're interested in knowing more, there's even a FACEBOOK PAGE for this old place!  Here is the translation of the text I copied from the Facebook page:

Ruins of the "Old Church", Arroyo, Puerto Rico Highway PR 753, Km 1.5 Ruins of the "Old Church" of Arroyo The old church of Arroyo began to be built when Mrs. Juana Rodríguez Rivera paid for the expenses, since she needed a place where she could "cover her spiritual needs", for unknown reasons, Doña Juana left the country in 1849 before finishing the construction of it. Old Catholic Church. It is said to have a series of basements. The Institute of Culture has it under its care, but the ruins are increasingly ruined by how neglected they are. The builder of the Hermitage of Arroyo, Don Francisco María Belgodere, had notified that it was finished, according to the minutes of the meeting of February 6, 1854, folio 5. In January 1855, an official notice was received stating that The construction of the Catholic Church had finished and it was in a position to surrender. Monsignor José A. Colón, in a message to the people in July 1982 says: “More than a hundred years ago, when Arroyo had a modest port and most of its inhabitants went out daily to deal with the Caribbean Sea to bring the necessary condumio to their relatives, when they felt the need for divine help in those hard daily tasks, they also resorted to the Patron Saint of the Men of the Sea and to the Virgin Mary of Carmen. ” It was then that a small wooden church was built where all those fishermen were placed under the protection of the Virgin Mary of Carmen, Patron Saint of seafarers. This was chosen canonically and liturgically as the Celestial Patroness of the town of Arroyo. On July 16, the Day of the Blessed Virgin of Carmen is celebrated. At the site called El Guaragüao, the veneration of the Virgen de la Maturena or Virgen del Carmen began for the first time. The legend states the following: “Monsieur Martin Maturene, French, was shipwrecked on the shores of Arroyo when a horrible cyclone sank his boat. In the midst of despair he fervently asked the Virgen del Carmen to save him, promising him that if he were saved, he would be his faithful devotee and erect a hermitage for her. The waves dragged him to the "Half Moon Cay" where brave sailors rescued him and brought him ashore. Then, Maturene bought a small image of the Virgen del Carmen and placed it on a property between Multal and Emajagual. When he passed away, he entrusted his grandson Cornelio Flores to continue the tradition that he started, which consisted of bringing the Virgin down to the town at the end of August each year. " Francisco and Arcadio Flores, [sons] of Cornelio, still keep the tradition. The church belonged to the San Antonio de Padúa de Guayama parish, and since 1855 it was known by the names of San Pedro Apóstol and Nuestra Señora. Francisco García Boyrie