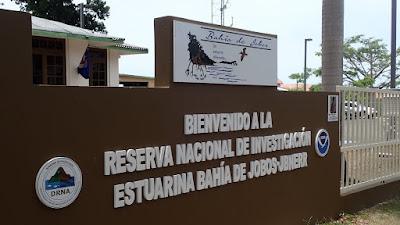 Now I'm no historian.  In fact, unless I can see a place, it is difficult for me to get interested about much of it.  But after stumbling upon the little town of Aguirre, PR and hearing Ernesto (Employee of the NERRA) talk about this town's rise and fall, I went digging!

It all began with an early morning drive to Salinas for a dental appointment.  After that, we thought it would be fun to grab some breakfast from one of the many little bakeries and take it to someplace on the water to sit and eat.  This is something we used to do back when we lived in Texas, and it was a fond memory we are trying to replicate here in our new home.

So we picked up a sandwich and drove toward the water.  After one false start that pushed our breakfast to be more like brunch, we simply picked a road and turned right!  That turned out to be 705, which took us straight into the heart of the old sugar mining town of Central Aguirre! 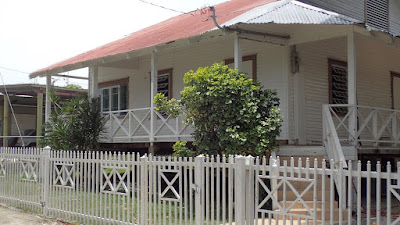 Knowing nothing about it at all, we did notice that the houses seemed to all be very similar.  They had a common construction of wood with lots of porch, and corrugated tin roofs, set on spacious plots of land.  We thought they must be part of the mill in some way, but it wasn't until we went inside the education center for the NERRA and met Ernesto, that the story unfolded.

But let me back up a little more here.. What is the NERRA?  It's the National Estuarine Research Reserve Association.  It is a national agency with locations all the US coasts, Great Lakes, and of course, here in Puerto Rico.  Much of their work is research, education and outreach, but since Hurricane Maria, the people here have been working to aid in the restoration of the Jobos Estuary.

So here is the connection that originally piqued my interest!  We had planned to use the Jobos Estuary as our hurricane hole back in 2016 when we lived on the boat in Salinas.  We actually dinghied into the mangroves to stake out a spot to bring Dos Libras should hurricane Matthew (which devastated Haiti) threaten to come any closer.

We didn't end up entering the estuary because hurricane Matthew passed to the south of us, but there were many boats brought here for the hurricanes in 2017, including the terrible and destructive Hurricane Maria.  The boats here were mostly OK, but the thing we don't think about so much as cruisers, is what that did to the mangroves that protected all of those boats from destruction.  According to Ernesto, many of the boats pounded up against the mangroves, causing them to be damaged in ways that it will take years and years to restore.

In the end, it can't be helped.  Humans value their own interests over that of nature, and it is what it is.  But thanks to organisations and people like Ernesto, we are at least made more aware of our surroundings, and of our impact upon these natural areas.  The NERRA organization does educational talks for groups and they also go out and document their observations of the ever-changing condition of the mangrove and salt flats areas.  It helps us learn and to see what our actions, in addition to those of nature, are doing to the protective mangroves of our coastlines.  They show us how the mangroves protect our way of life, so it is important for us to protect theirs. 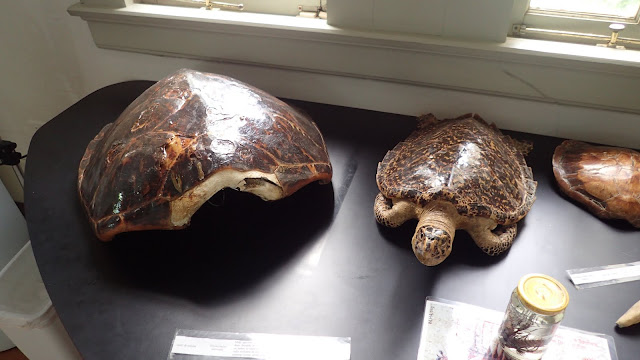 But what about the buildings here that all seem to be connected in some way?  Ernesto was a wealth of information about that as well.  He told us about the sugar production that really started here in the 1500s.  During the time between then and the 1900, when the industry was taken over by North American Industrialisation interests, much of the production of sugar cane was done by slaves. (This article in Spanish has a LOT of information on the history of sugar production in Puerto Rico.  You can copy and past it in sections on Google Translate)

During the 1900s, the industrial revolution brought automation to the production of sugar and it required far fewer workers to do it.  A group of investors from the US bought the plantation and others around it, and began to industrialise the process.  They brought with them, a phenomenon that was also occurring in the US, of creating "Company Towns".

These huge companies would create entire towns around their factories to entice upper level executives, as well as workers so that they could come and live nearby with their families.  The companies opened grocery stores, entertainment facilities, post offices, clubs, even golf courses and hotels, everything needed so that the employees of the mill didn't have to leave the area.
There was a clear distinction between the American executives and the local Puerto Rican workers, and that is still obvious today as you drive down 705 and see the homes on the north side, and how the differ from those of the working class to the south and southwest. But regardless of which side of the road you lived on, the mill town of Central Aguirre was a thriving community for many decades.

After many years of operating at a loss, the mill finally ceased operations in 1990.  The production of cheaper sugar in other areas from the sugar beet, and the increasing difficulty in finding sugar cane and getting it to the factory quickly enough, made it simply too expensive to continue.  In 2002, the US Department of the Interior designated a large part of the old mill town in the National Register of Historic Places. (This link takes you to a downloadable PDF that shows photos and descriptions of the buildings included in the National Register of Historic Places)

According to Ernesto, the company enjoyed many boom years during which the town thrived.  But, all of the buildings in town, including the homes, were the property of the Central Aguirre Mill.  So what happened when the mill finally closed in 1990?  The property laws here in Puerto Rico were the cause of a lot of difficulty for the people who were living in those homes.

Then the company pulled out of Aguirre, the executive and technical workers living in the nice homes on the north side of 705 all left, taking their families with them back to the US.  The local workers here were actually given the keys and allowed to take over the homes.  This was great, until those homes were designated as an historical site. 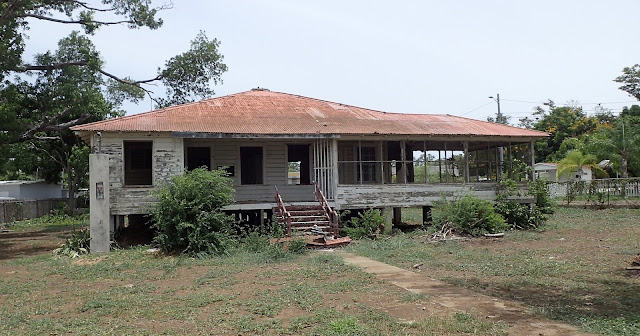 Since the people living in the homes could not demonstrate ownership, they couldn't get loans or government help to assist them in the upkeep of the homes.  They aged and were damaged by the elements and hurricanes... but because of their historical designation, they could not be changed.  They could only be restored to their original condition.  The problem with that was that they were made from wood that is only available from the Philippines!  Of course, obtaining that wood for repairs now is very expensive, and way out of reach for most of the people here.

At some point, the government of Puerto Rico recognised their ownership of the homes if the occupant could prove that they have lived in the property for 15 years, but that still didn't help them come up with the funds to keep the homes from falling into ruin.  So, many of these homes are doing just that and driving though these streets, you get the feeling of sadness at the absence of what must have been a booming prosperity.

But some of the homes have been purchased by people who DO have the funds to bring the homes back to their former glory - albeit a glory that is reflective of that time in history. 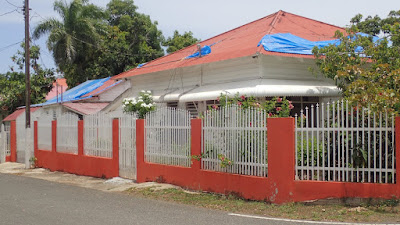 Driving through the streets, the homes are in many stages of disrepair, much from Hurricane Maria.  The "Blue FEMA tarps" are still in use today!  These are homes from the "worker" side of 705.  So many of the people living here now support themselves by fishing. 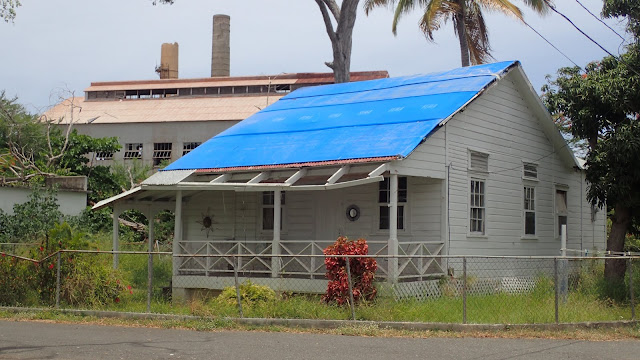 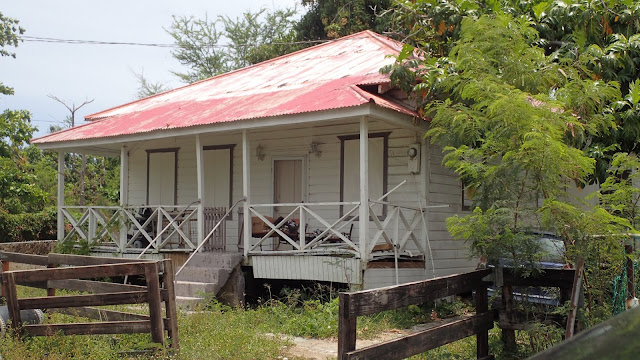 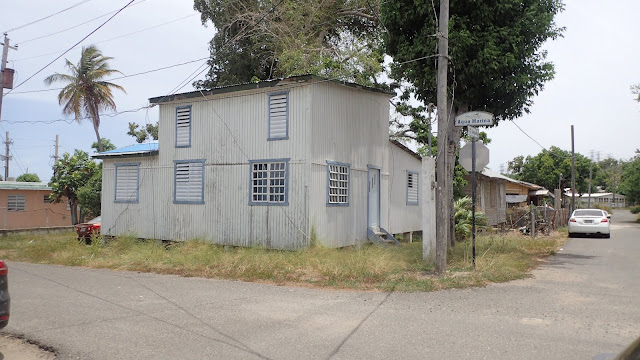 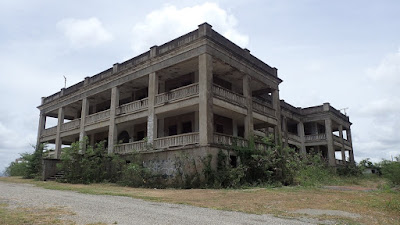 After spending such a long time listening to Ernesto's stories about a time long past, we finished our drive through town with a closer look at the ruins of the old Hotel Americana. This was the hotel built by the Central Aguirre Mill, in which visitors to the town could stay.  It must once have been a beautiful facility and many of the rooms have balconies with gorgeous views. 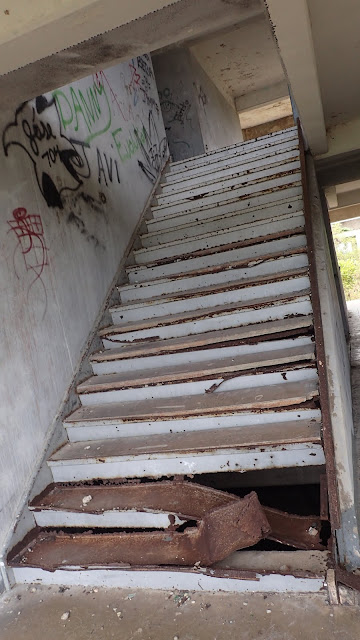 I was very tempted... but remembered that people are expected to refrain from injuring themselves here in the land of no caution tape!  Man I wanted to climb those stairs!

So with our curiosity piqued, we told ourselves that we will return to take the hike to the mangroves and the natural areas just outside of the NERRA property. There are trails and you can visit the ruins of the mills, but the morning got away from us today, and it's HOT!

There are several links in this post, so if you're interested in history, take a look and explore if you've got the time.  This is just one of the many, MANY pieces of Puerto Rican history that we hope to uncover!