Throughout our travels in the Caribbean, we have never been in the right place at the right time for one of the many Carnival celebrations that some islands hold.  Until now.  Carnival finally caught up to us here in Grenada.  So now that my excuses have been stripped away, it's just me and the wild crowds and mayhem... And I'm going in!

Crowds are difficult for us.  Normally we avoid them at all cost, but while Bruce opted out, I decided "you only live once!" and so I tagged along with our friends Mindy and Ron on Follow Me.

A van full of intrepid revellers trundled through the dark, pre-dawn streets to be deposited in the thick of it - St. Georges, Grenada.  There are lots of events held around the island that are all part of Carnival - or Spicemas Grenada. I wish we had the energy to attend them all, but we have to make our choice.

The meaning behind the J'Ouvert is from the French words for Day and Open.  This is the "opening" event, or official kickoff for the final two days of Grenada's Carnival celebration, and it's held early in the morning, which is the best time of my day!  When we arrived and walked down to the parade route, I suspected that for most of the revellers... it was the ending of their yesterday!

We found ourselves a spot on the sidewalk that was far enough away from the sound trucks and the bulk of the crowd that we could still hear ourselves think!  We made one attempt to go down there and see what was happening, but the people were so jam-packed together, we soon lost our nerve and backtracked to sanity.


Seriously.  Somewhere in that pulsating throng of people, I began to doubt the wisdom of my decision.  We became more and more packed together, people were going this way and that way.  Some pushed wheelchairs that couldn't be seen until one bumped against your leg!  I honestly think that I could have simply raised my feet and the people would have carried me along!  The tiny fear of falling down and being trampled became very real!  I was relieved when our leader made the sign to turn around and go back! 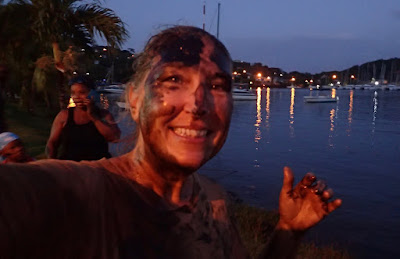 That's enough of THAT!  Back along the less-crowded part of the street, I was happy to watch the ebb and flow of colorful characters go by!

Getting oil and paint poured, splashed and wiped on you is just a fact of life.  If you come to J'Ouvert, it is going to happen so you might as well embrace it!  And embrace it I DID!

A guy came by and stopped, raising his container of oil to pour it over my head!  I said "Not on my face!" and he said to cover my eyes.  I put my hand over my eyes and felt the warm, thick oil as it slowly soaked into my hair and ran down my face.  It was a moment in which time stopped and I felt like I was standing off, just watching this happen to me.  I removed my hand and the guy gave me a hug, followed by a fist bump/fist to heart.  We looked into each other's eyes and a feeling of kinship, respect and understanding passed between us.  The total acceptance and recognition in that moment was warm and soft as the oil I now wore.  This is what I came here for.

Perhaps I think about things too much, but that's how I learn and grow from these events we have traveled so far to experience.  Playing Jab is a tradition these Islanders enjoy.  It means something deep to them.  It combines the symbols of freedom from slavery while it brings to mind the realization that no one is ever truly free - if not physical chains, there are always symbolic chains that bind us.  Some of the Jab Jabs carry long, heavy lengths of chain, symbolising slavery of the past, while others drag around babies, irons, and boxes filled with whatever enslaves and burdens their lives now. 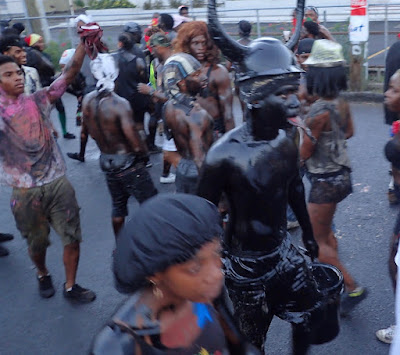 Running around the streets at dawn, surrounded by fearsome Jabs, a white person could get an uneasy feeling... While the frightful Jab Jabs - derived from Devil - do their best to look scary and gross, the sharing of oil and paint with us only brings us together on common ground.  I felt honoured to be allowed to glimpse this part of their history, and I got the idea that they recognised it, not simply as another way that us white folk are trying to "steal" their holidays, but as the sign of respect and acknowledgement that we meant it to be. We have literally placed ourselves at their mercy and been brought gently into the fold where we all partied as one.  It just makes me fall even more in love with this island. 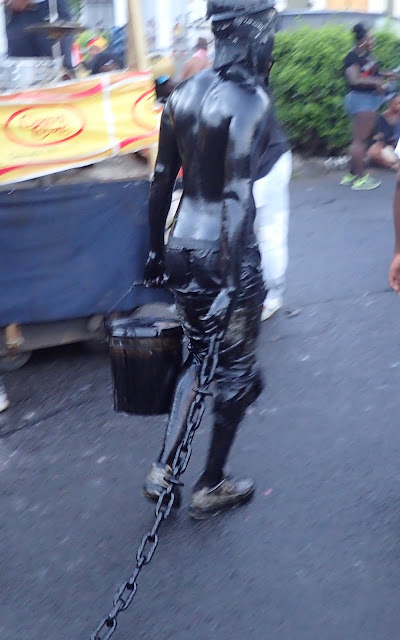 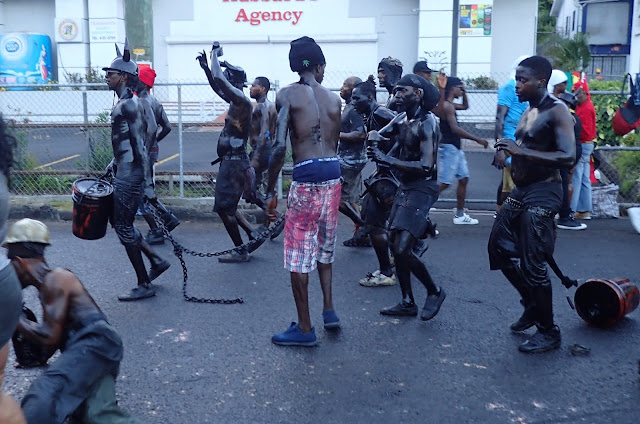 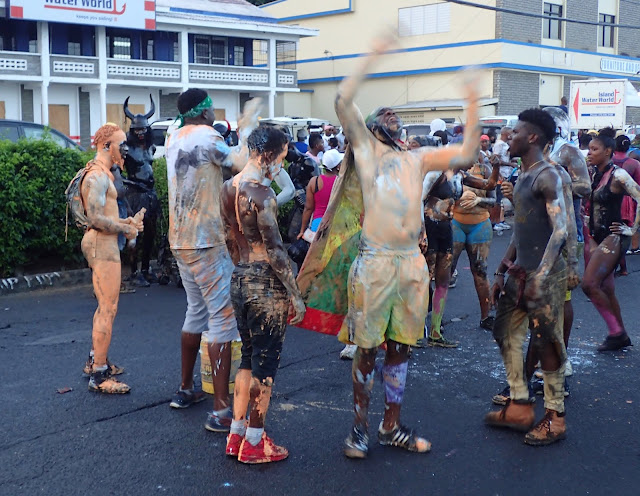 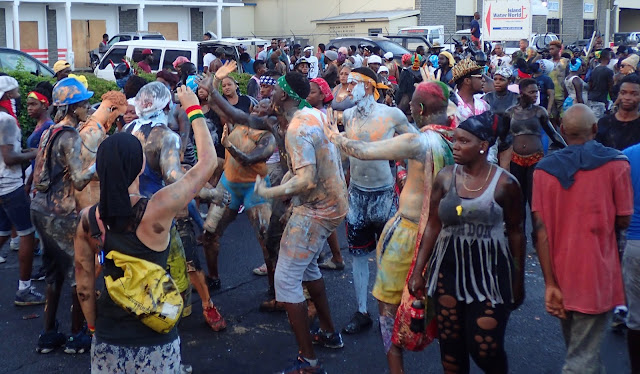 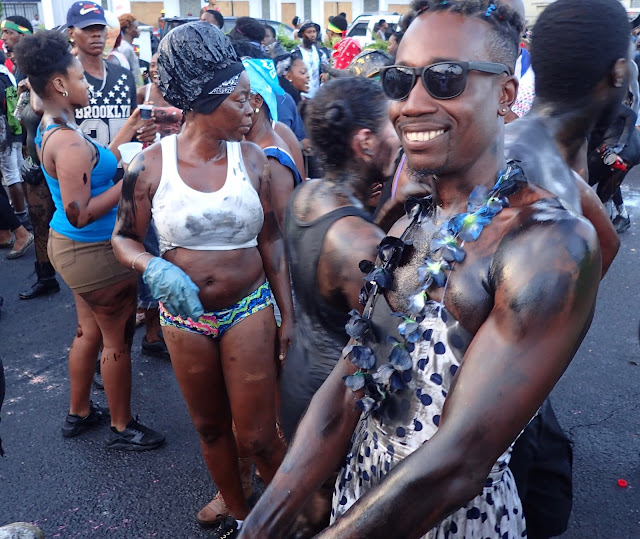 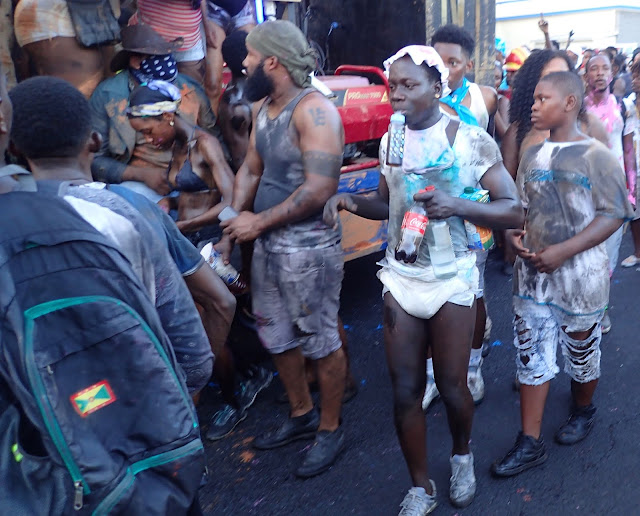 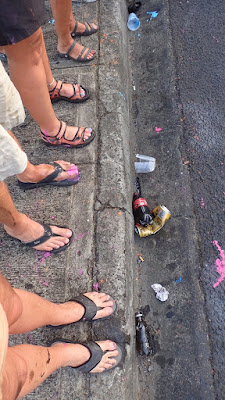 Just about the time I began to wonder if this milling - growing - throng of people was all there was, the sound trucks began to slowly move up the street toward us.  We found ourselves on the fringe no longer as the dark cloud of bodies began to envelope us.  At one point we couldn't hear one another speak, and the beat of the music was so strong in my chest I felt that all of our hearts were forced to beat in unison.  I could hardly breathe as we clutched our chests and looked wide-eyed at one another!

We retreated back up the block a short distance, but eventually realized we could not outrun it.  We turned to face it and just watch in wonder as the crescendo reached us once again. 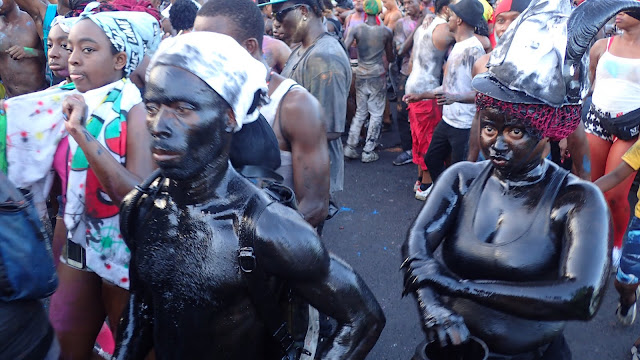 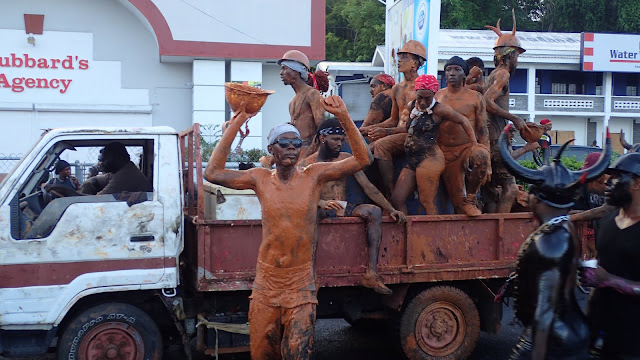 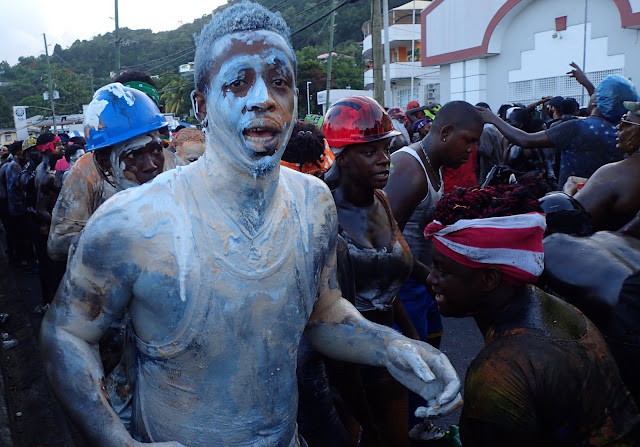 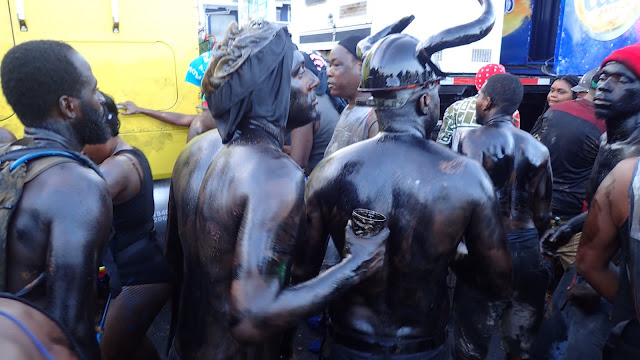 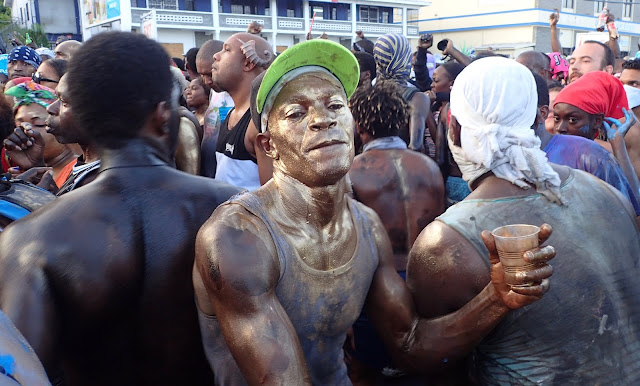 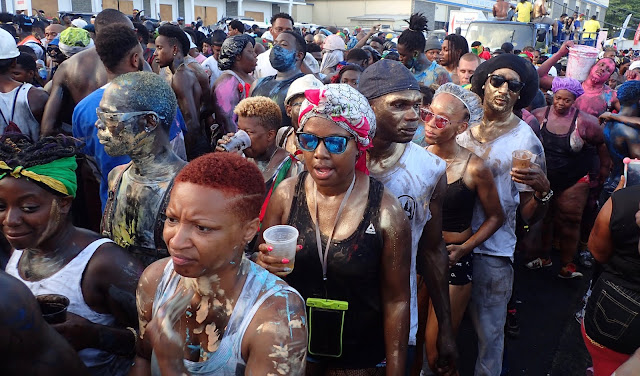 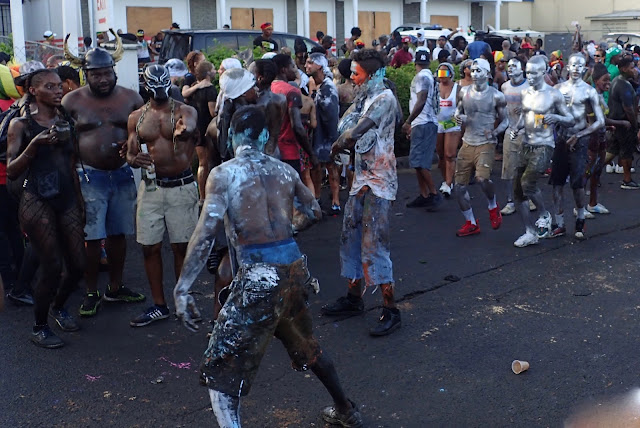 Now and then, someone would walk by us and stop with that special glint in his eye.  That look became known to us.  That look meant that we were about to be wearing another coat, another color of something thick and sticky!

Sometimes it was a thick, messy hug that left our chest imprinted with more oil or paint.  Sometimes it was a hand dipped into a bucket and the paint wiped on us or slung at us like an artist creating a modern masterpiece.  We all looked different, yet the same.  Covered in humility that brought us all together in fun.

The sound trucks passed us and took with them the crowds.  We turned to follow, trying to make our way back to the pickup spot.  We had an hour, best to get closer so we wouldn't miss it.  Maybe we should have turned the other way to make our crossing, but as our little group trailed behind Ron as he pushed through the packed street, I could feel bodies pressing me from all sides.  At one point, right in the middle of the street, I'm almost SURE that someone tried to have their way with me... hope I'm not pregnant!

We eventually reached the less crowded side of the street, went up one block and then, gulping large lungfuls of fresh air, we found our pick-up point about three blocks up.  The look on Joey's face was like he was shellshocked!  I think we were all relieved to have escaped the masses!

With plenty of time to spare, we went back down the oil drenched streets to stand on the fringes once again where we watched the party continue to ramp up.  We would be leaving in less than an hour, but something tells me that this party is nowhere near over! 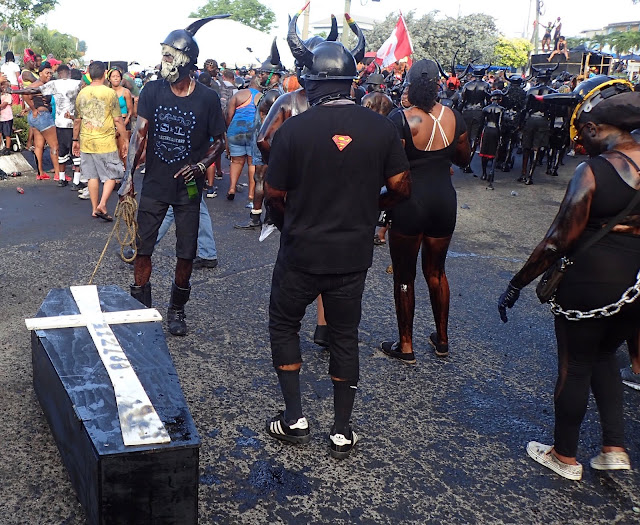 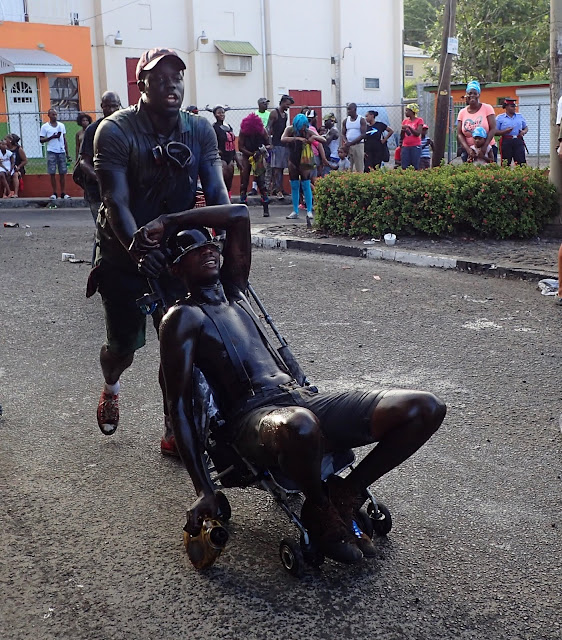 The other half of our van group rejoined us here.  There were just too many people for us to all stay together.  It was a zoo!  Here we could stand on the sidelines and watch what appeared to be the judging or end of the parade.  There was music and some dancing.  There were some call-and-answer numbers that I wished we knew!  It was wonderful to watch the crowd all raising their hands in unison! 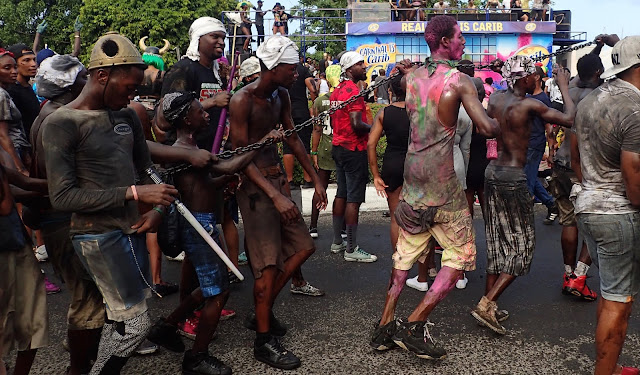 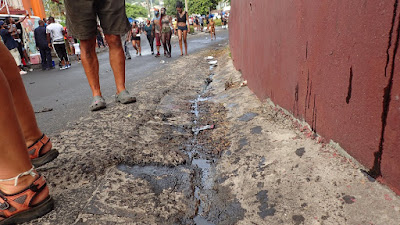 The party was by no means over, but it was time for us to go back up the oily hill to find Shademan and the van that would take us away from this madness.  I chose to walk up the gutter where there was less oily coating so my flip-flops could find some traction.  The oil literally ran in the gutters!


Where did it all come from???  It was black like used oil, but it was creamy smooth and not filled with gritty pieces like you would get from an oil change.  Maybe they bought new oil and just died it black.  It didn't smell dirty... and I would know!  I was wearing it on my FACE!


While we waited for the rest of our group to arrive, it began to rain.  It was a nice cooling rain that felt good on our bodies.  It was beginning to get warm as the sun rose, and I was a afraid we would all soon begin to smell like french fries! 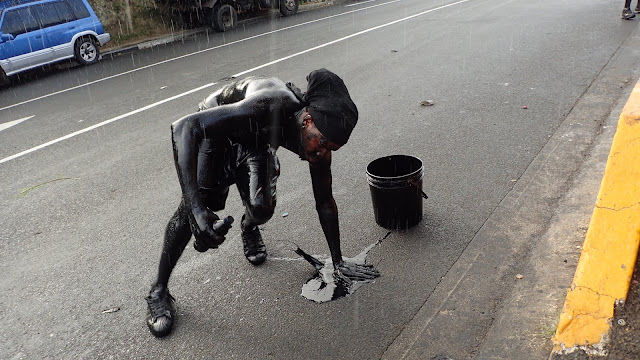 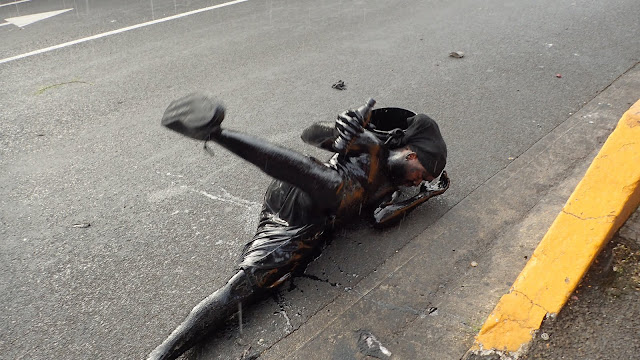 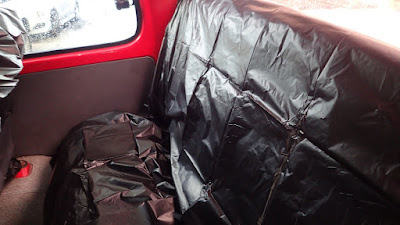 Knowing how particular Patrick is about keeping his new van clean, we all wondered if we would be allowed inside again with our funk.  But Shademan was ready for us.  The seats were all covered with trash bags so that we could keep our funk to ourselves!  We squeezed back into the van and took off for home.  I for one was very glad to have a designated driver to drop us in and take us out of the fracas! 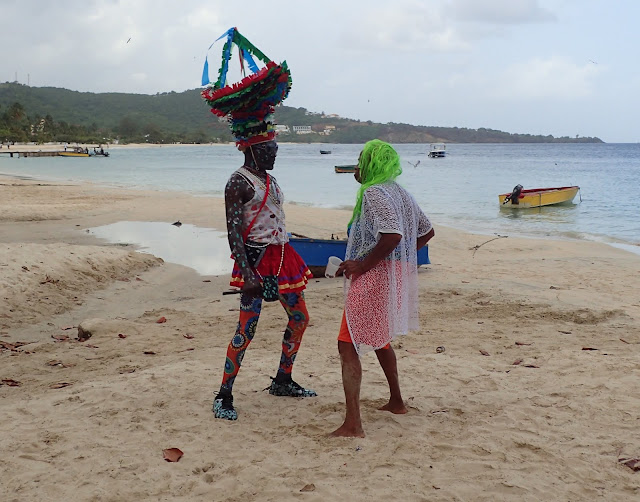 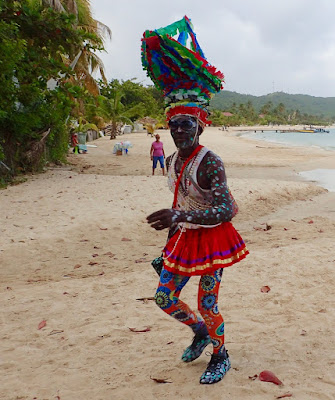 We laughed and relived the highlights of the morning while we drove through the back streets to avoid the hellacious traffic near the waterfront.  When we returned to the main road and turned the wrong way... we were all pretty much game for whatever came next.  Has Patrick been awake too long and forgotten where he was going?  Nope, he had a surprise for us! 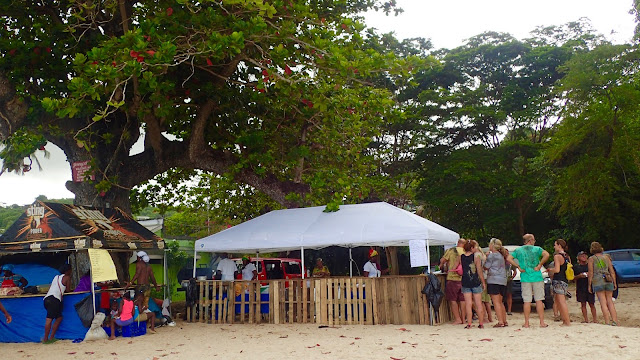 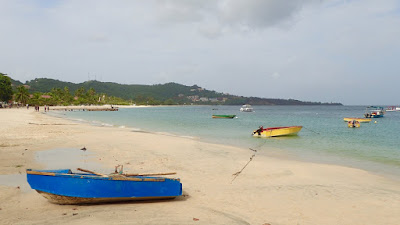 We descended like a heard of hungry locusts upon this little snack shack on the beach.  What a treat!  Patrick really knows how to show us a good time and always has a little surprise up his sleeve.  I had a bake and some much needed water, while others had a full-on brunch.  I knew I would have to feed Bruce when I got home, so I entertained myself taking in the beauty of this place.  Put this on the list of places to visit... SOON!

Well, that's it.  My first J'Ouvert is history and I survived it.  I wish Bruce had come with me but he would NOT have survived it!  Not only did I survive it, but I came away from it feeling an even deeper connection to this island.  It entertains me to think about my friends and family back in the States, and wonder what they would think about all of this.  I'm sure there will be more than a few raised eyebrows and the question... WHAT WAS I THINKING???

Well, the answer is this.  I was thinking that I came out here to learn and grow and experience things that I never would if I had lived out my comfortable life as it was going.  And it's going very well.  I have to confess, however that I bailed on Monday Night Mas.  You might remember I purchased the t-shirt and lights and all... As the time neared, I decided that I would rather save my energy for Tuesday's Pretty Mas so that I could attend with Bruce.  Stay tuned for a more colorful blog post about that!