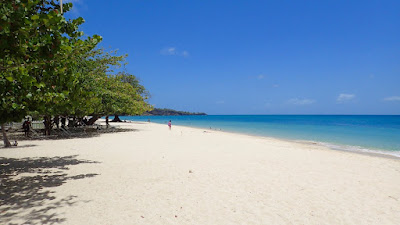 Summertime is upon us here at 12°N Latitude and it's hot.  It's also Hot-Hot-HOT ~ in that it's alive!  It's constant movement!  It's VIBRANT!  A simple trip to the grocery store just stirs the blood and makes us glad to be alive... and living in the Caribbean!

Cruisers have access to special "shopping busses" several times a week that pick us up at the closest dinghy dock and take us around to the main shopping outlets in the area.  The advantage is that we can make several stops for about what we would pay for public busses with multiple stops, but bus waits for us and we can pile on loads of groceries without having to squeeze in with the locals.

It's been a while since we've taken the shopping bus though.  For us, it's more fun to hop on and hop off wherever we want to go and then take our time, make a day of it and see the sights without the pressure of a bus driver waiting for us to finish.  It takes a little more effort on our part to lug our stuff along with us and we have to limit what we buy to what we can physically carry in one trip, but the reward is obvious.  Spontaneity of movement takes us to some pretty special places and adds spice to our day! 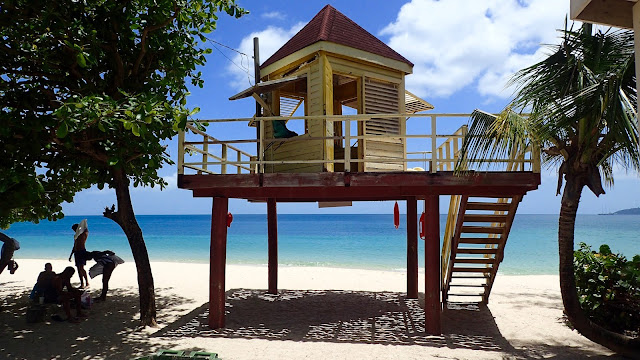 Today for instance, we made the short walk up to the main road and caught a public van, same as so many times before.  We asked to be let off near the IGA market and when the bus spit us out just outside the park we've been passing with the promise of checking it out... someday!  Well check your calendar, because Someday is today! The smell of fresh-mowed grass filled the air as all over the island people are preparing for the upcoming Carnival Celebration.  You can feel the anticipation and it's contagious!

We walked toward  Grand Anse Beach thinking this would be a great place for a picnic, when suddenly I spotted a man I had been looking for for weeks, just sitting on a bench in the shade.

Jacob Scott is a marvel.  A friend posted some of his work on Facebook some time ago, but I wasn't able to find him... until today!

We sat down on the bench next to him and spent the next 45 minutes listening to his stories about his work, his life, the islands and just staring in wonder at the miracles he creates with his two hands and a bucket-full of garbage.

Jacob was working on what looked like a place mat with a bunch of people playing soccer.  He cuts small pieces of cloth into clothes and fashions faces, arms and legs from whatever he can find that fits the purpose.  No thread is used to tie these pieces together - instead, he deconstructs lengths of polyurethane rope of many colours that he finds washed up on the beach, and uses the strands to bind it all.  It wasn't a placemat - but the bottom of a new piece that he was commissioned to make for a woman from the UK.  He creates the bottoms and then makes the surrounding sides, then stitches them together - each piece is completely one-of-a-kind, and these pieces of art will outlast us all!  The best part is that they are made with nets and rope, bags and cloth scraps that would otherwise find their way into the ocean or the land fills.  Jacob makes BEAUTY with 100% recycled trash!

Since we left to go cruising, I have only purchased two pieces of local art, this will make it three.  Back in my former life, I used to buy commemorative pieces of this or that from everyplace we vacationed, and many of those were given away or sold during my recent trip to the US.  Some of the more sentimental pieces are now waiting for us at my daughter's house in Florida... but we've resisted buying much because we just don't have room on the boat for all the lovely things I would like to have!

Bruce is normally the Enforcer of our self-imposed "no buy" rule... but today, even HE melted when I began turning one after another of these beautiful pieces over in my hands...  We were no match for the temptation - it wasn't a matter of "if", only of "which one"! 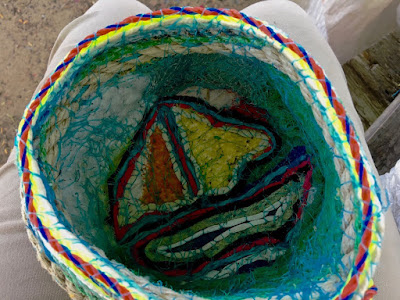 Before Bruce had a chance to come to his senses and change his mind... I had this one picked out and paid for!  Of course the hidden sailboat inside combined with the fact that its colours mirrored the Caribbean waters just beyond the beach, made the choice simple!

Jacob answered our many questions and told us of his life in the islands and his travels in the US.  He has sold his treasures to notables such as Mick Jagger, Walter Mondale, and Stephen Spielberg!  Can you believe that I own a piece of art that is coveted by people who can afford to buy anything in the world they want???

He told us of many places his work has been sold and talked of how many times people have tried to get him to produce pieces to be sold in exclusive art galleries all over the world, but he just can't keep up with the demand, so he doesn't even try.

I asked him if ever thought of teaching an apprentice his craft so that it can be carried on into the next generation.  He told us a story of how he had once tried teaching some young men, but they saw how much money he was paid for his work, and later in the evening, they attacked him on the beach and beat him for his money.  They only got $10EC (about $3.70 US), but Jacob spent three weeks in the hospital recuperating and almost lost his life.  What a waste! 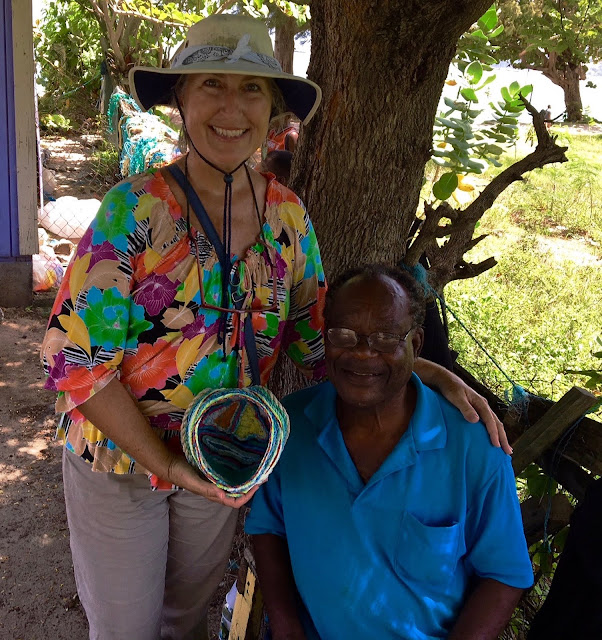 Eventually a friend of Jacob's arrived and we said our goodbyes, promising to come back again to see what new pieces he had from time to time...  Not only have we found a lovely beach to lie on and pristine waters in which to soak our hot bodies, but now we have a new friend to tell us stories of Grenada and many other islands we have visited along the way.

We walked back to the IGA and after sitting with friends over ice cream, we finished our grocery shopping and headed for the main road to catch a bus back home.  As usual, one of the van conductors saw us coming and waved us over.  Smiles greeted us as the conductor asked us if we were going to "the end" as he made a circling motion with his hands to signify the round-about where we get off...  They know.  I laughed as I asked him if we were that obvious!

We lugged our heavy bags onto the bus, squeezing into the seat next to a young woman and off we went.  The music was pounding out an infectious beat and I struggled to keep from dancing in my seat.  Nobody else was bobbing, so I had to keep still and act as if I were unaffected - while inside I was dancing!  The song lyrics repeated over and over - Crab in the saltfish-crab in the saltfish - and Pig tails - pig snout - pig tails - pig snout!  Now and then I caught the words callaloo and JabJab... I smiled to myself and though about how absurd this would sound to me back in my former life. These are the things that fill the lives of the Grenadian people and now they fill ours!

Watching out the window as we whizzed through the streets, I saw snippets of Grenadian life.  Young women walking along the street carrying sacks, their faces impassive and impervious to the glances of the young men.... but maybe their hips swung just a little bit more than before.  The bus always stops for the pretty girls and we pile on as many as possible!  The smell of delicious food, sweat, and flowers fill my nostrils as I breathe it all in.  I love this island! 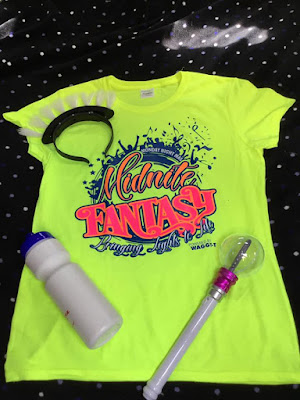 The music moves my blood.  The people everywhere are getting ready for Carnival.  Little kids in colorful school uniforms are preparing for the parade, people bustle here and there laying on groceries before everything closes for the festivities.  Cruisers are getting ready too!  I've got my swag all ready for the Monday night Mas.  I'm a little anxious, but I don't want to miss it.  We're here.  And we are VIBRANT too!