We've been cruising for more than four years now, but I still feel more than a little anxiety when we begin a new chapter in our story.  Prickly Bay these past two months has been a stress-free environment we were reluctant to leave, but it's time to go.  We nervously blew away the cobwebs in our heads and tried to remember the things we should do to get the boat ready to move!

Very soon the waves got big and the cat began to vomit while Bruce bounced around on the foredeck trying to get the mooring lines tucked away... As I wrestled the wheel and watched it all happen, I asked myself "Why we were doing this again?"  Oh yeah.  Tomorrow is haul out day.  We needed to be close to Clarke's Court for our 10 am lift appointment.

My legs trembled a little as I pushed dark thoughts from my mind.  What if the engine quit?  What if something broke?  What if the steering chain fell off?  The boat has been sitting for two months and boats like to fall apart when not in use...  All of this is completely unfounded but I guess the time off has made me soft.

Thankfully it wasn't long before the waves moderated.  Small patches of coral reef provide a damper for the large north swell that's been pummelling the islands for the past few days.  Even here on the south coast of Grenada we've felt it.

The cat settled down and we motored back to Benji Bay and dropped anchor very near our last position there.  It was nice to be in a new spot, even if we had been there before!

It would have been lovely to do some snorkelling, but we had to be adults and finish our preparations for hauling the boat.  Last minute cleaning and reviewing the list of thru hulls to close occupied us until sundown.  When 5 o'clock comes, work is done and it's time to sit on the deck, try to relax, and enjoy the cool evening breeze!

In the morning, there was a bit of a scramble.  Larry, the yard foreman, established radio contact with us about an hour out and asked if we had our sails down.  WHAT???  It seems that I had failed to review the "Rules and regulations" email I received about three months ago when we made this appointment.  (Whoops!)  The yard requires that sails be removed.  Why?  I have no clue!

So Bruce and I had to abandon our plan and work on getting the headsail down within the hour of our scheduled time in the lift.  Larry took pity on us and allowed us to keep the mainsail on.  It would have been impossible for Bruce and I to remove it!  We were already frazzled by the time we motored up to the lift bay.

My emailed request for instructions AND my radio request had gone unanswered.  We've hauled out before and thought we had things ready, but most of our preparations involved closing thru hulls and flipping the refrigeration from water cool to air cool...  With those shaking knees again, I motored slowly into the very wide lift bay. 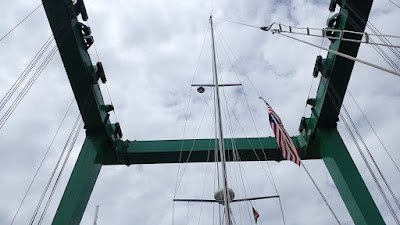 The guys on the concrete docks stood ready with boat hooks.  They asked us to throw them a line.  WHAT?  Nobody said anything about the need for lines!  I ASKED!!!  Quickly they positioned the fenders to keep us from rubbing the concrete.  I maintained our position using the engine while poor Bruce scrambled to find lines long enough to reach both sides of this very WIDE lift bay.

It was a total shit-show and I'm sure we looked like idiots.  Who doesn't have lines ready for a haul out?  Well I can tell you that in the past two lifts we've done, the bay has been very narrow and no lines were needed.  I simply drove the boat in and positioned us between the slings, then they lifted them into place and we were done.  This time, the whole operation is on a scale so grand, that would have been impossible.  But nobody told us!

OK, enough with the excuse-making.  When all was said and done, we should have been more pro-active.  We were unprepared.  The past weeks of inactivity left our brains soft and fuzzy... But it's all behind us now.  Lines were produced, disaster averted and the crew was very professional, even if we were not. 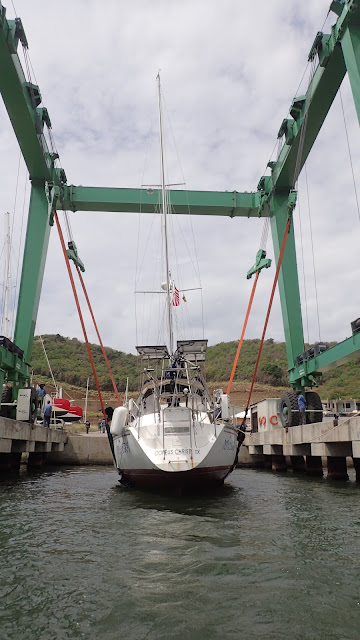 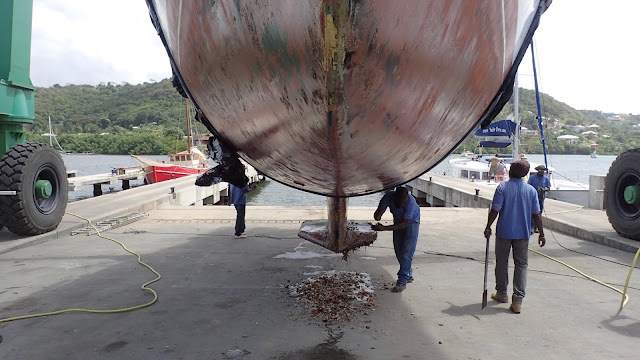 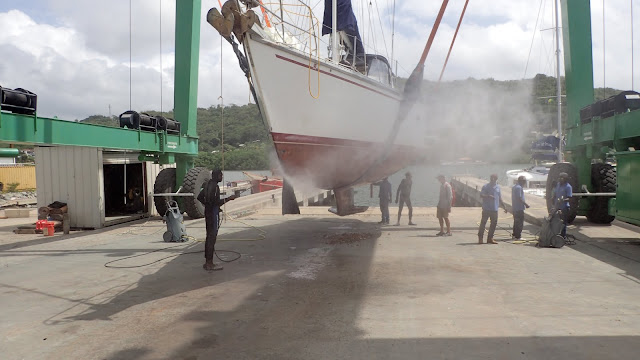 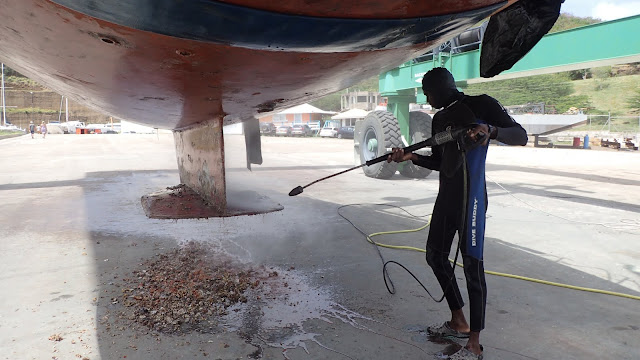 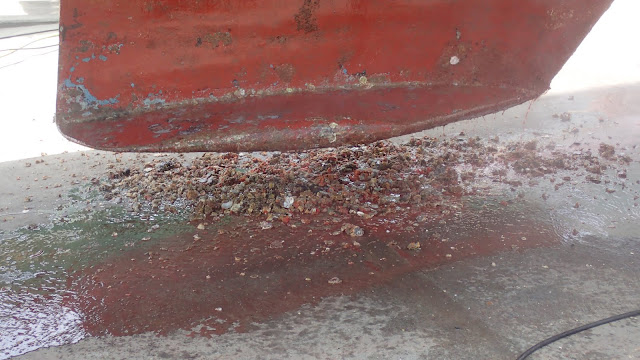 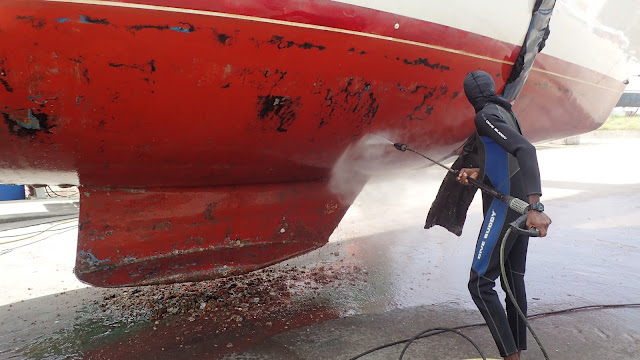 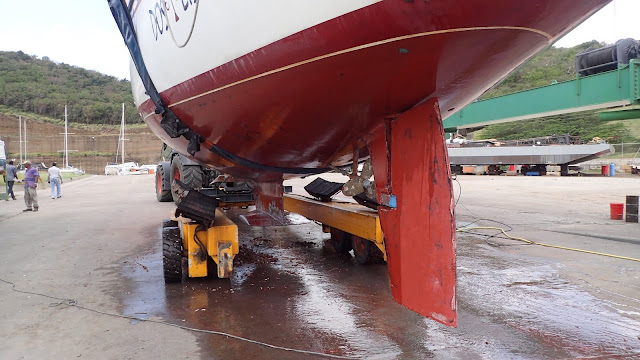 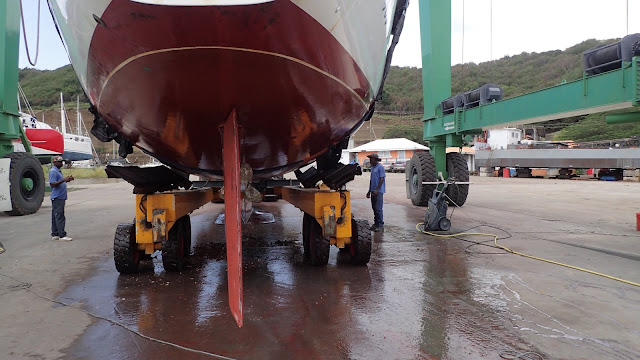 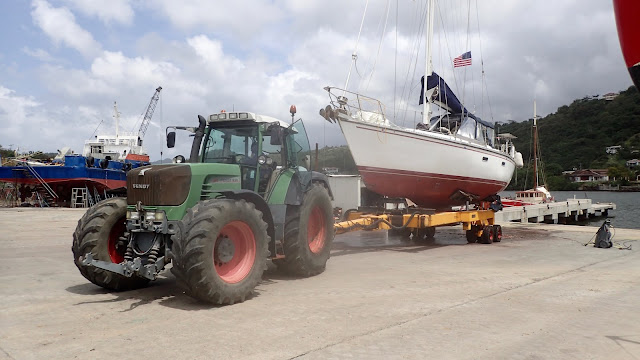 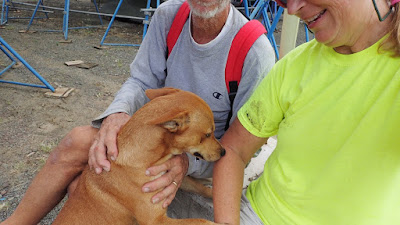 Feeling better about things now that our boat has come to a stop, we sat to watch placement of the stands.  The yard dog came over to get acquainted with us.  Very friendly pup!  A little TOO friendly as I bear the mark of muddy paw prints!  It's OK boy... cruisers are used to parting with clothes when they get too dirty!

The crew was chattering about how to get the job done and we felt we could give them some privacy while we found a snack.  We sat in the cool breeze at the on-site restaurant and had some water and a couple of pastries left over from the breakfast rush.  We were too hungry to wait for an order and my stomach was still a wad of nerves... but it was getting better.

The bottom didn't look too bad so far.  Maybe we WILL only be in the yard for a couple of weeks!

We returned to the boat to find the crew had gone.  They have several boats to lift today so they disappeared for lunch, leaving us to get settled.

We walked under our home to take a closer look.  There was some shell growth blocking many of the thru hulls. 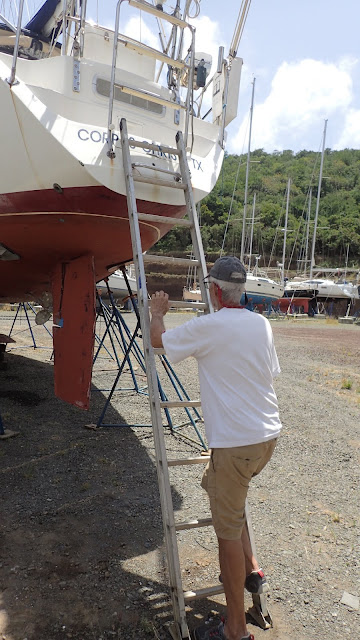 We found a ladder lying there for us to place where we wanted it.  Usually the ladder goes up the side of the boat where the gates are.  This time, I requested that it be placed at the stern.

A big contributor to my overall anxiety level has been that I would have to climb that ladder to get onto and off of the boat.  Not so bad during daylight hours, but bathroom runs at night have me worried. Placing the ladder at the stern gave me some comfort because I wouldn't have to climb quiet as high on the ladder to reach the presumed safety of the boat.

Once Bruce had it set and secured to the boat I gave it a go.  I gingerly climbed up - without looking down of course - gripping the rungs of the ladder and the aft railing of the boat like my life depended on it.

Once on deck, I still couldn't look down.  It got better by the end of the day, but it was tough at first.  The boat IS moving just a little with the wind. 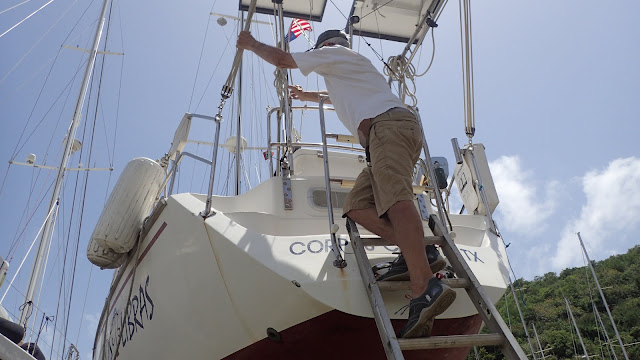 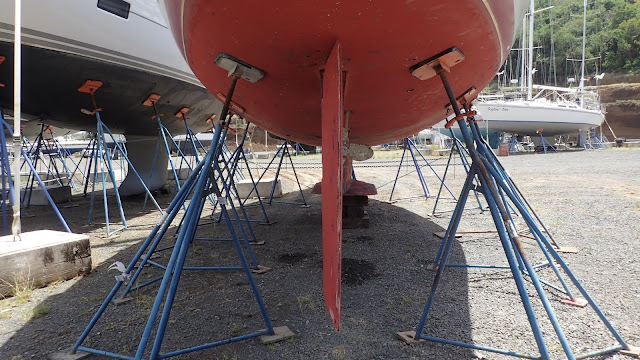 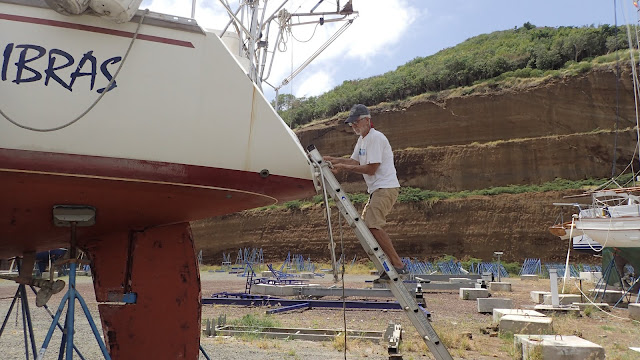 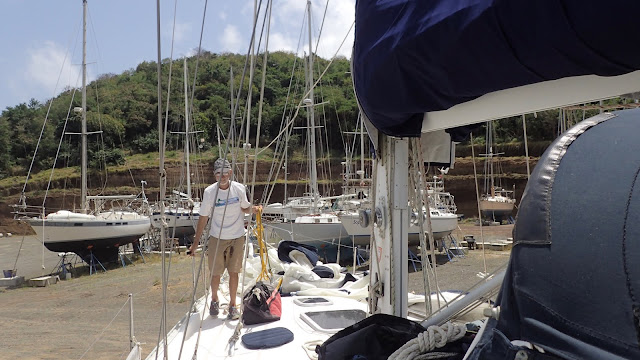 It's going to take some getting used to, but in my mind, it still beats moving out to some apartment with all of our stuff.  The cat is a major deterrent, she has the litter box and all the things that go with it - and she would be alone in a strange place while we worked on the boat during the day.

This is the first time we've had to live aboard with the boat on the hard.  It's more like camping in that we can't use the showers or the toilets, and we can't really run a lot of water down the sink.  Washing dishes will be a PITA so we've bought some paper plates and plastic cutlery to try to cut down on dish washing.  Lucky for us, our refrigeration has an air cool option. 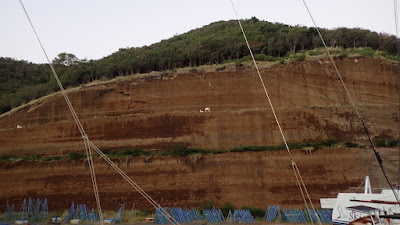 On the upside, I will be able to get off the boat and get some exercise.  Just walking the distance to the restroom will add a lot of exercise to our lives.  Showers will be another plus.  The washroom facilities here are pretty decent.  That first long, luxurious shower was heavenly!  I don't think I've been this clean since we left St. Lucia!

We're settling in here, internet is going, we've found the laundry room and spent our first quiet night without the waves to rock us to sleep.  Sounds of water lapping against the hull have been replaced with birds and the bleat of baby goats as they settle on the surrounding cliffs for the night.

Suddenly it was morning and we must have slept well!  I'm feeling better about things and my anxiety level has dropped significantly.  I've got this!  I'm mentally prepared for whatever comes our way and this is just the beginning of a new chapter in our lives.

Today we will meet with our contractor, Anderson, about what needs to be done.  There's always more than planned when the boat comes out of the water, but we're ready!  Good morning boatyard!  Bring it!