Did I say it hasn't been too hot?  Well perhaps I was a bit hasty.  While it is not as hot as summers back home in Texas, it is a blustery 87° with BLIZZARD conditions!

Of course it isn't really snowing here in Grenada... but you can't tell that by looking out the window!

All morning we've been trying to tune out the sound of a million bees buzzing in our bilge.  There's been a guy using a grinder to expose the areas around our keel that need repair.  The sound transmits through the hull so that we can almost feel the buzzing in our bones!  Any plans we had to work outside have been abandoned. 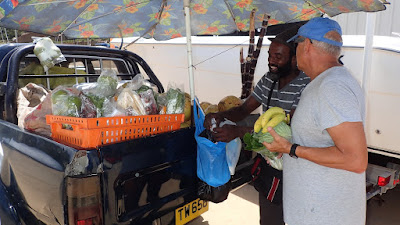 About mid-morning I realized that I was slowly being covered by a thin layer of dust.  NOOOOO!!!! I knew it would be dusty and dirty living in the yard, but maybe I hoped for a miracle.  Yesterday didn't seem too bad, but then the wind wasn't blowing quite as furiously as it is today.

In an effort to reduce the amount of dust coming inside, we reluctantly closed up all of the overhead hatches and the ports on that side of the boat.  Life goes on... but it's getting warm.

Lunchtime came and the sound suddenly stopped!  Hooray!  We can open the windows and get a little breeze while we have lunch!  Anderson stopped by to tell us the fruit truck was in the yard.  We grabbed a wallet and hurried over to see what they had!

A small crowd beat us there but we got some nice things; lettuce, grapefruit, bananas and some coconut water, all for about $6.50 US. 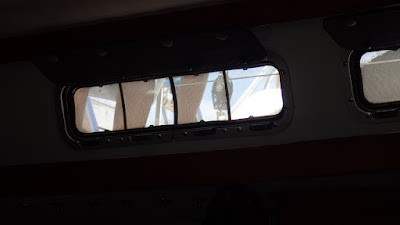 I made us a nice lunch salad and was just starting to peel the grapefruit, when I heard the sound of someone climbing aboard our boat.  That's a thing here.  Nobody knocks, this is their work area.  They just climb up and do their thing and it's probably a good idea if we remain dressed... I must constantly remind Bruce of this because every time I turn around he's stripped back down to his underwear!  Old Guys!  Sheesh!

A pair of legs appeared outside the window.  Looks like they're repositioning the tarpaulin skirts...  Wonder what's up with that.  I didn't have to wonder for long.  The giant bees began buzzing once again below the keel.  I guess it's time to close the windows again.  Then a new sound completely eclipsed the giant bilge bees!  It seems that the stress cracks on the sides of our hull are the next item on the to-do list.  And so it begins...

The sun rose higher and it grew progressively warmer inside.  All of that lovely breeze blowing outside was wasted as it carried clouds of the dreaded paint/gelcoat/fiberglass dust that began to surround us.  We had to close ALL of the ports.


We were too warm to do much of anything, so we languished the afternoon away, thankful for internet!  By 3:30 we gave up and headed for the door!  It was just too warm to remain inside.  We made our way toward the transom to climb down, only to realize that our ladder had been removed. 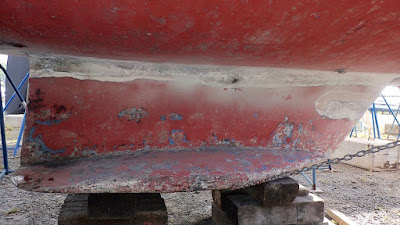 The crew had finished the hull sides and keel, and were ending the day with the transom.  We were able to make a hasty escape and enjoyed the cool waterside restaurant for another hour. We returned just as they were finishing up and we went over all the crew did today.

All of this is a mystery to me and because of that, my mind makes it a huge deal.  Speaking with the guys about what they've done and what comes next really calmed my fears.  They seem so confident that I can't help but be comforted. This is just another day at the office for them!  Maybe I'll sleep better tonight!  Or maybe NOT! 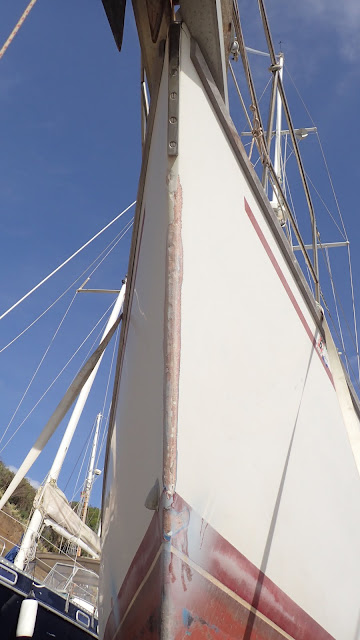 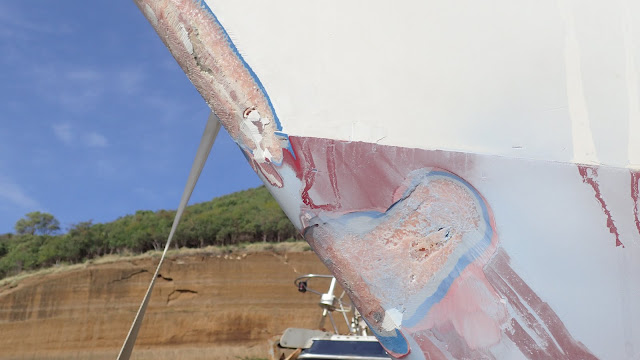 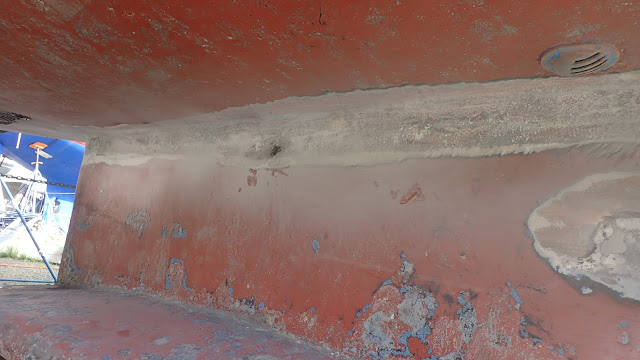 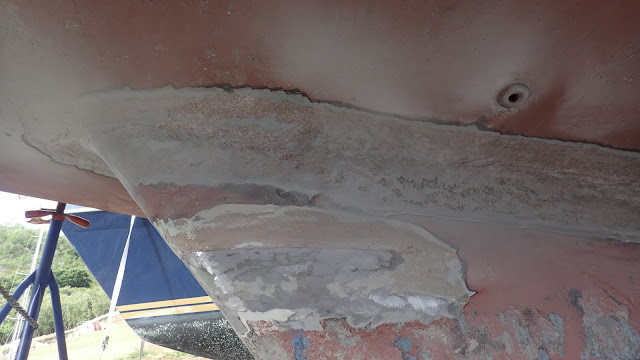 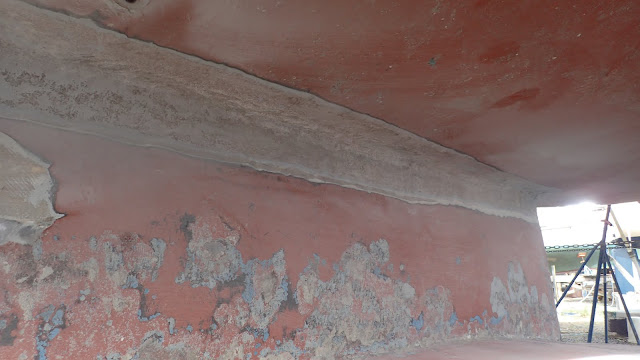 In one way it is a bad thing that the crew is off for the weekend.  It gives me two days to worry about things and build up monsters in my mind.  But maybe there really ARE monsters here!  Even if there are, we'll deal with it and worrying isn't productive.

Patience isn't my strong suit, but the guys do very hot and dirty work and they deserve their days off.

At the end of the day, we showered and made a dish for a little pot luck aboard Grateful.  Niki and Jaime have their boat on the hard close-by so we've got company in our misery!  We spent the evening forgetting about our boat projects and sharing stories!

The rum flowed as did the laughter.  A story about my mother's family led Niki to break out in song.  She was so cute singing "I Am My Own Grandma" that I wished I had her on video.  The song was so funny I had to Google it and guess what?  Somebody has already posted it on Youtube - many times.

Good times... Anyway... the crew may be off relaxing, but our weekend will be spent cleaning out the bilge so that Anderson can come on Monday and investigate.  It isn't pretty.  But that's a whole other story...