With the invention of the internet and wifi, people who leave their lives to go off into the wilds of the Caribbean can remain in contact with one another. There are wifi hotspots throughout many of these islands and while we were at Union Island some days ago, we found one! Cruiser’s Wifi! $40 US per month gives you unlimited data from anchorages that Cruisers frequent, including Tyrrel Bay.

I spent the majority of our time there catching up on Facebook and answering messages from others. But one message rose to the top of the heap. An invitation to join our friends on Kailani over at Sandy Island for a beach BBQ had me scrambling to reschedule our busy dance card. That’s a lie. We were completely free for days to come with no direction in our lives whatsoever outside of making it down to Grenada sometime in the next couple of weeks.

I quickly and happily accepted the invitation, telling Will we would be moving over to Sandy Island after a quick run to the grocery in Tyrrel Bay. 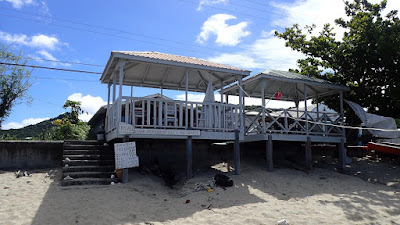 Said grocery run was somewhat underwhelming, but we did find rice, the main ingredient for my planned offering to tonight’s meal. Upon our return to the boat, I was frantically trying to get caught up on Facebook, uploading photos to my page… the coveted second invitation came from Kimberly on Pura Vida.


The two couples from Kailani and Pura Vida were heading out to hunt Lionfish, having already procured two big lobsters from a local fisherman. I firmed up the plans and signed off the internet… otherwise we would STILL be sitting in that harbour and not out here enjoying life to the fullest like we are! 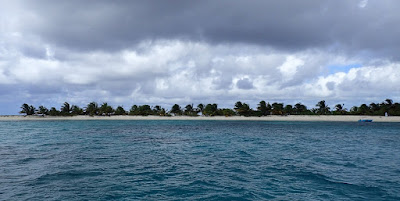 With no reason to dawdle, we pulled the anchor and motored back around the point to take a mooring in the marine park off of this delightfully Tropical Island! The winds were up and the boat bounced a bit on the mooring, so we stayed onboard, leaving the snorkelling for tomorrow… I was just starting the rice when the call came on the VHF that we would meet ashore at around 5pm, and bring some lighting if we have it. We would plan on being out after dark! 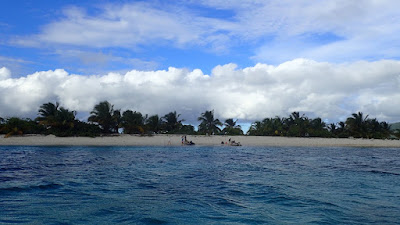 Our dinghy joined the others on the sandy beach. We anchored it just offshore in the waves to avoid having to drag it up onto the sand. The clouds made a dramatic setting and we hoped that the rain balls we could see passing to our north would not drift our way. 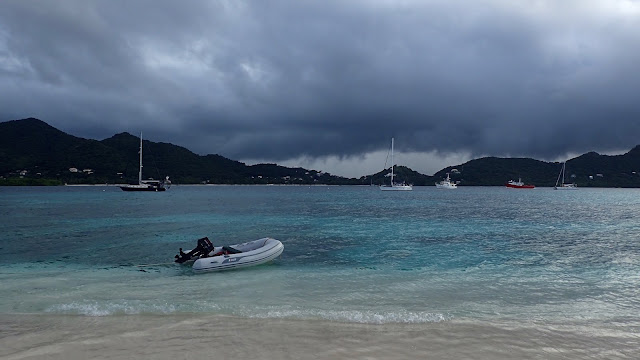 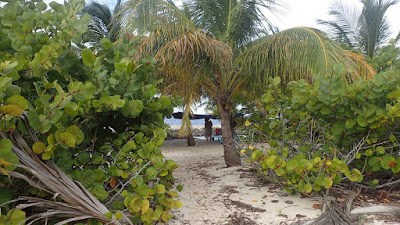 John-Michael and Kimberly have a master list of everything needed for the perfect beach BBQ! They’ve developed skills since we saw them last! Bruce and I have been alone for the majority of the time this summer. Other than our guests and the islanders, most of our Cruiser friends had continued on south without us. Now that we’re finally arriving to Grenada, everyone is beginning to move back north! 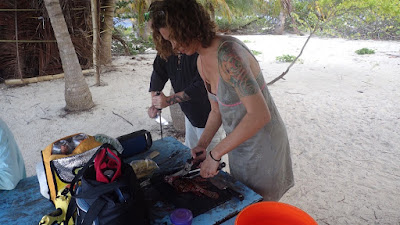 This gives us a chance to meet up with friends and catch up on all the gossip and gain invaluable knowledge about the best places in Grenada! We had lots to talk about and as usual, I babble! Anyway, we were all happy to hang out after weeks apart, and it was fun to watch Kimberly prepare the lion fish for grilling!


Lionfish are an invasive species and are damaging to the other fish in the Caribbean. Tonight, we are the lucky recipients of a share of today’s catch! They had several small ones and one goliath! Kimberly used her kitchen sheers and tongs to quickly snip off all of the venomous tines, careful not to touch the ends or leave any buds behind. It was pretty cool. Once she was done, John-Michael filleted the bodies and readied them for the grill. 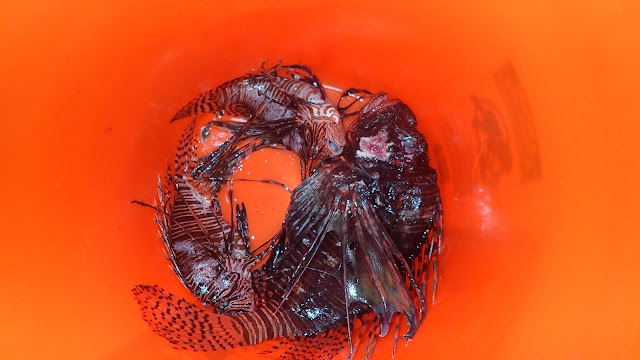 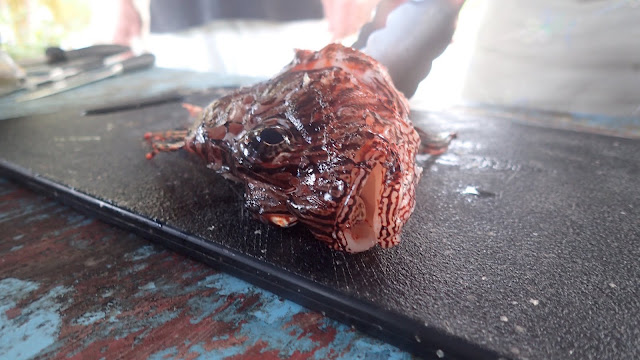 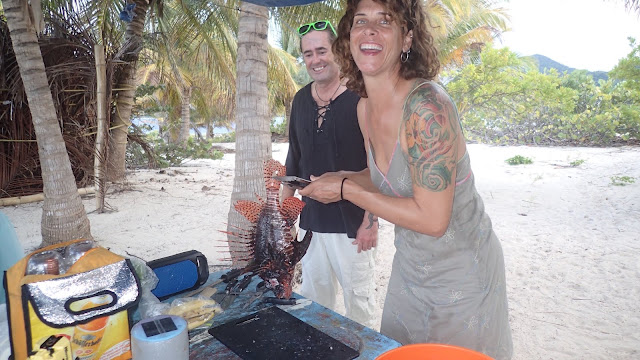 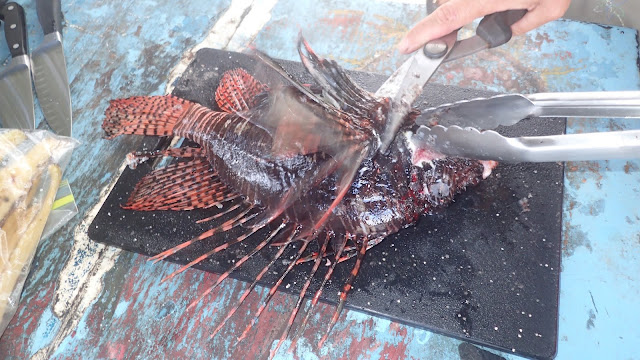 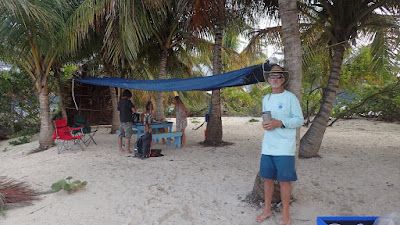 The lobsters were already prepped and as soon as the fire was properly glowing, they were the first to go on. We all stood around and chatted while we watched the split lobster bodies turn the perfect crispy red… our mouths watered in anticipation. 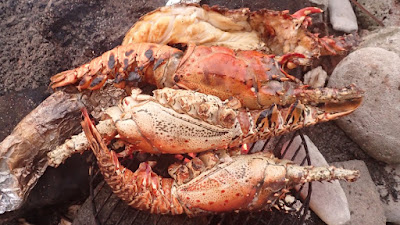 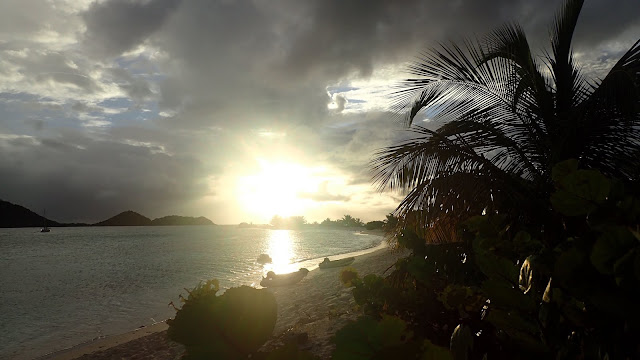 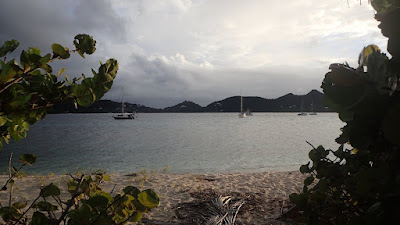 At some point I realized that we had forgotten our plates and utensils… Bruce and I had to dash back to the boat in the setting sun to get them. Luckily, the wind had died down and the ride was dry! 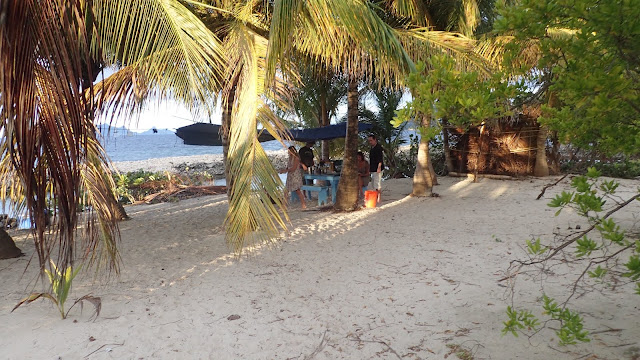 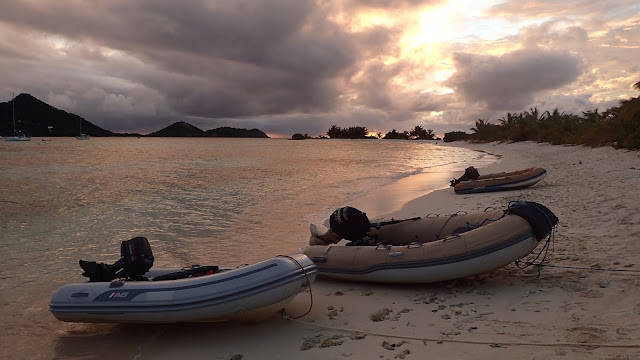 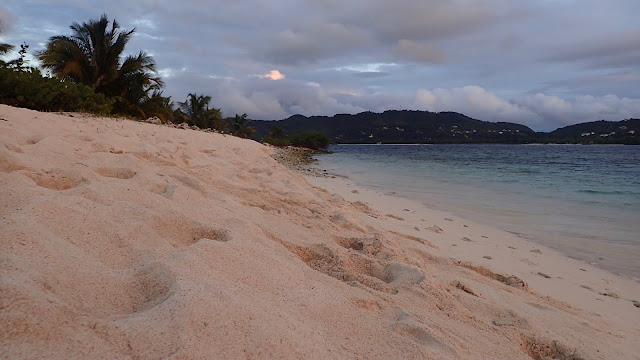 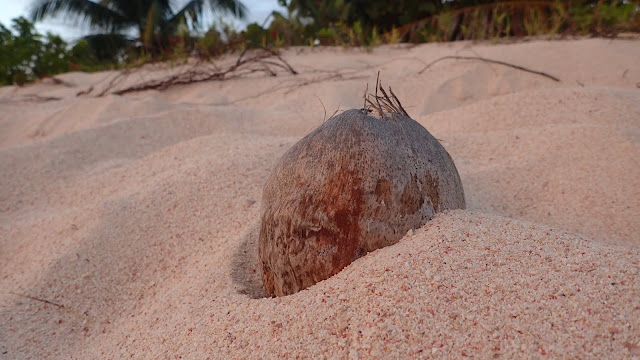 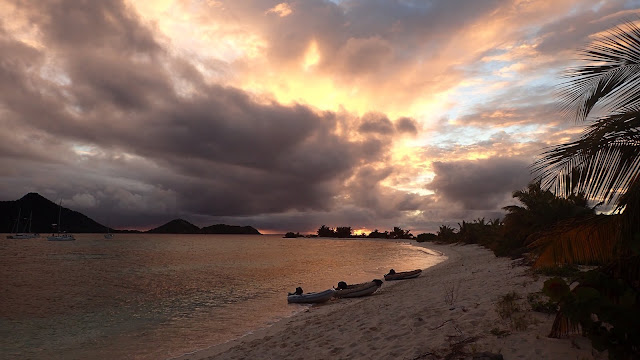 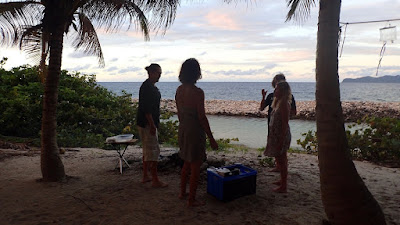 The sun was just setting as we returned with everything we needed and the Lionfish were going onto the grill! 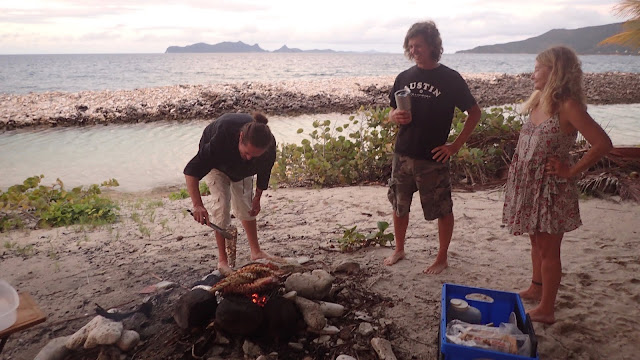 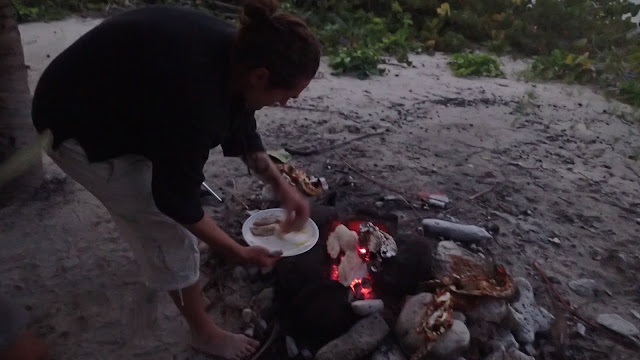 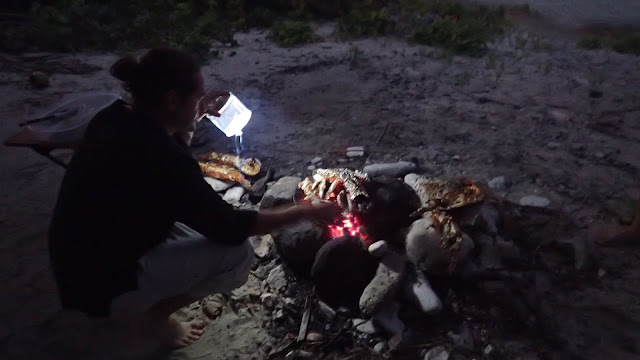 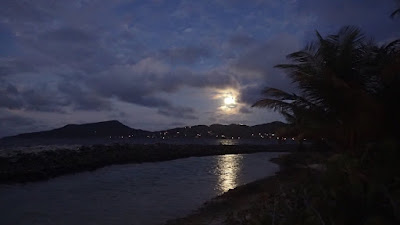 The moon lit up the trees behind us and I was drawn to the water by the glow! What a gorgeous night! 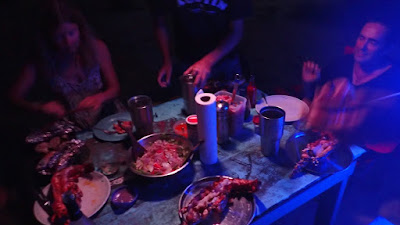 Time to eat! We all grabbed our drinks and plates and gathered round the small picnic table beneath the tarp. Our Lucy-lights cast the perfect circle of safety for our lively little party.


As we devoured the delicious island fare, we began to notice an alarming increase in the number of hermit crabs. They came out in droves and crawled around beneath our table, and everywhere else!

It was a little creepy, especially when one of them would unabashedly crawl right across a foot, causing an “eek’! I stifled the urge to run screaming into the water, taking comfort in the group. 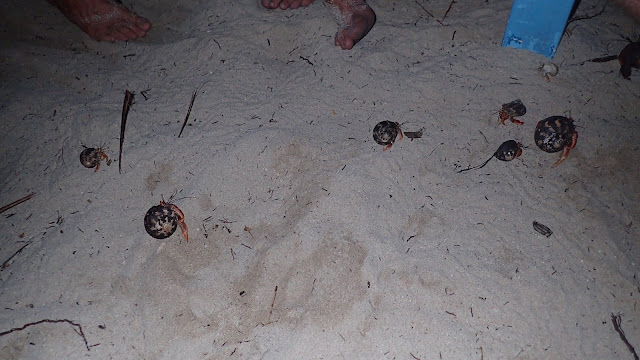 Then the scurrying rats came out to play!!! Yes, RATS! Well, JM assured me that they were harmless field mice, judging from the length of their tails and small size. I allowed myself to be convinced of that, not that it was much better. A rodent is a rodent. We decided also that island mice (or rats) would be free of the diseases that city rats carry. Comforting.

My freak-out was bubbling under the surface but still manageable and we continued our dinner and chit-chat… until a roach dropped from the tree and landed on Kimberly’s hand! She leaped up from the table and did a little dancing thing around to the other side where she ended up requiring comforting from her solicitous spouse. He soothed her and switched chairs with her, taking the one directly in the line of fire.

Things settled back down, even with the ever growing number of crabs and rodents. They grew more brazen and came closer to us… then a second roach appeared on the table right in front of ME. THAT’S IT! We broke it up, scrambling to gather our belongings and stuff everything into bags (hoping we weren’t carrying any critters home with us in those bags)! The dying fire was doused and we ran for the beach and the safety of our floating homes leaving a lot of the gear on the beach for retrieval in the daylight tomorrow!

Our idyllic mood was broken but what fun we had before it all fell to shit with the invasion of crabs, rodents and roaches! You see, it’s not all perfect out here! We have peril lurking around ever dark corner! Would we have changed a thing? Nope! It was a bonding experience! And at least there were no mosquitos!

A HUGE thanks for the DOUBLE invitation… and to our host and hostess on Pura Vida for doing the heavy lifting!