We took a couple of days off to rest and regroup after entertaining my Mom and Nephew for some days here in Rodney Bay, St. Lucia.  Lots of irons were in the fire here... We had access to an Island Water World store, which had us thinking about maybe remaining here for the summer.  We were still on short notice with the marina and we hoped that our new generator would arrive before the end of the days we had already paid...  Am I babbling? 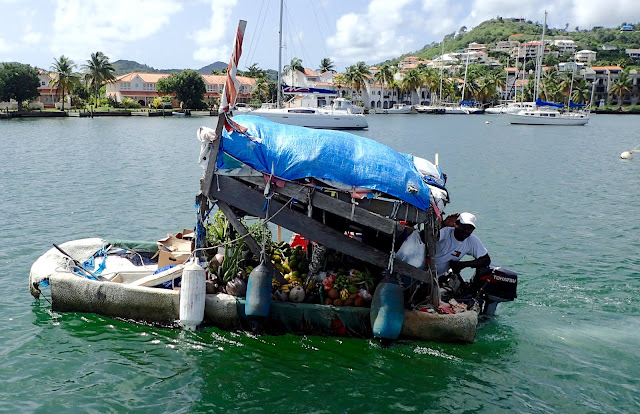 Life is pretty good here in the Lagoon.  We have completely flat water so we don't have to worry about things we do in the wild.  The boat is secure and well protected.  We have nice air conditioned shower facilities ashore, and of course... a pool!  Ok, so I picked up pink eye, probably from one of those nice facilities... but there's a medical clinic about a block from our dinghy dock here in the Lagoon!

Everything we need is right here! We spent our days doing minor boat projects... Well, maybe not so minor was figuring out that once and for all, unequivocally... we do NOT have a leaking water tank!  The problem has been a phantom.. eluding reason and research for months!  It seemed to be transient.  We would decide it wasn't leaking, and then our water would be gone.  We did every kind of experiment possible, but because we were both making water and using it... we just couldn't figure it out.

Finally... my brain started to work for a brief and shining moment and the pieces all fell into place.  If we left the pressure pump off but the manifold open... the water would leak out.  But where was it going? How?  The foot pump!  We disconnected the manual foot pump from the system and voila!  No more disappearing water!  The foot pump was silently syphoning water out of our tanks!  So we ordered a new one for the next guest to bring to us here in St. Lucia

So with that part of the project on indefinite hold... we replaced the fresh water pressure pump as well... Long story, don't ask... Just say I got a wild hair!  We reworked all of the hoses under the sink and now it's all tidy down under there... 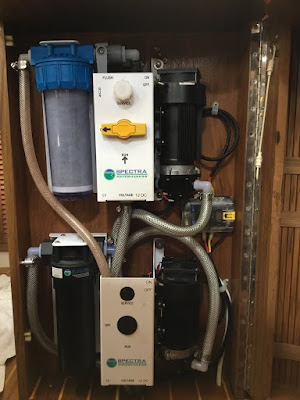 During the course of our escalating problem with the disappearing water... it seemed that we had to make water an awful lot.  Part of our investigation for the one problem proved we had another... Our water maker was not performing as it should.  One of the pumps has been getting louder and louder... It was working, we were getting pressure, but it was loud!

I had many conversations with the guy who sold us the water maker, who is also a friend... He gave us some pointers... things to try, tests to perform.  We did them all and it still didn't work right.  We had to call in a professional.  Regis Electronics, right here in Rodney Bay, sent out a guy who fixed it.  It took him about eight hours to troubleshoot the problem... and troubleshoot the fix. 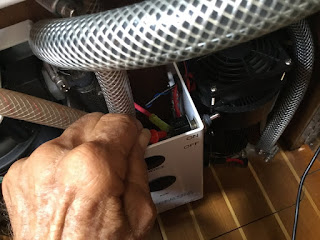 We bought a new pump - the noisy one was going out...  We put a new head on the other pump... everything seemed set up right but it wouldn't work.  The new pump was working backwards.  But the hoses were on right!  Long story short, the pump we bought originally had a modification which changed the direction of the flow.  The new pump we just put in did not have the modification, so the hoses had to be switched. 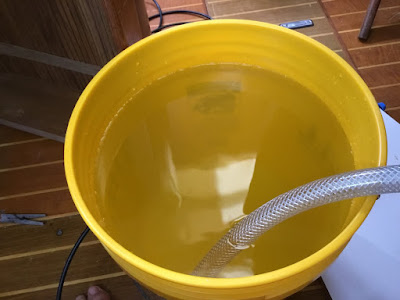 We ran some cleaning chemical through it and everything worked much better now in every way but the salinity level.  We were still getting readings of TDS in the high 300/low 400 range.  Potable, but not as tasty as it is when we get lower level readings.  We were told that the only other thing to do was to replace the membrane... we're going to wait on that and see how it goes. 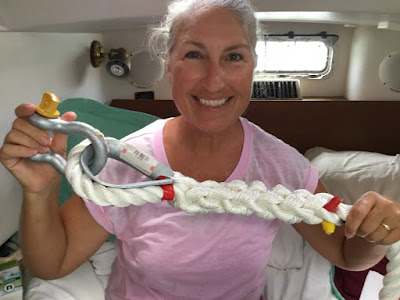 I worked on new longer snubber lines and I made us a pennant.  So many of the mooring balls here in the Caribbean have only a metal ring at the top of the ball and no pennant to tie to.  I made us one.  It has a thimble on both ends and it's about ten feet long.  We used it here in Rodney bay on their horrible rusty mooring rings. 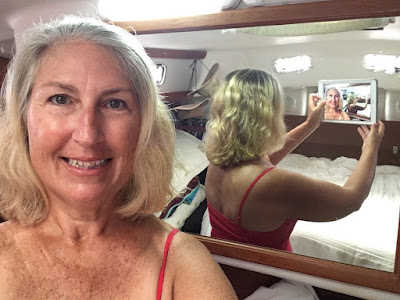 Of course we did all of the normal things like bottom cleaning and regular household maintenance... One day I even got a(another) wild hair and cut mine!  I was in the shower soaking up the wonderful AC and just decided today was the day.  There is a nice mirror and counter in the facilities there so that I could actually SEE what I was doing.  I think it turned out great!

All of these things were just marking time for the real project!  We ordered the new generator from a place in Florida on July 7th.  Best case scenario it would arrive on the 21st.  Dream on!  But it did arrive on the 28th!  Just three weeks from the date we paid the money.

St. Lucia is an awesome place to receive large items.  We used a company called Caribbean Shipper to provide us with the address in Miami for the generator (or any other thing you need - they will consolidate multiple shipments large and small) to go, then they brought it on a boat to the port in St. Lucia.  From there it was delivered to a dock in the boatyard next to our marina.  The marina has a shipping agent who did all of the paperwork and coordinated the box being brought right to us.

The whole shipping process cost $150 from Lauderdale to Miami > then $265 from Miami to St. Lucia > then the Agent's fee and getting it to the dock was about another $80!  Not bad for getting a 260 lb box from Ft. Lauderdale to the deck of my boat here in the Caribbean... and no duty!  WhooP!!!

Finally the big day arrived!  And not only did our generator come... but friends arrived to help us get it into the boat... AND to install it!  Miracle of Miracles!

Now... Bruce and I installed our water maker with no outside help... but my thinking was that if we had to do this job one of two things would happen... maybe both.  We would blow the boat up... or this would lead to divorce.  We weren't looking forward to either of those things... So... I bowed out and the guys took over.


Today we had Michael from Adventure US 2 - old friends... and Alan from Consort - new friends... here to help us get the 230 lb machine detached from the shipping pallet and lifted onto the boat... then down inside the engine room where it would take the place of our old Fisher Panda (never buy a Panda). 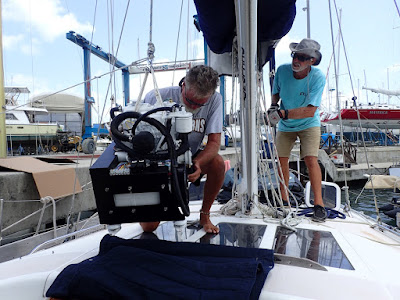 The men made it look easy!  I worried that it wouldn't fit through the inner opening to the engine room and it almost didn't... They quickly removed a part then put it back on once they had it inside. 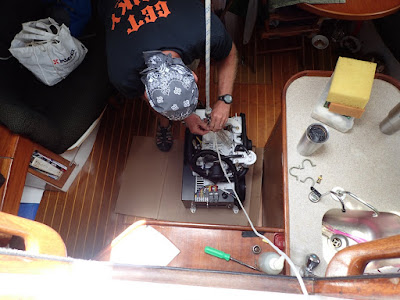 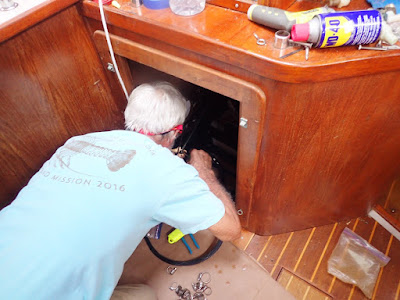 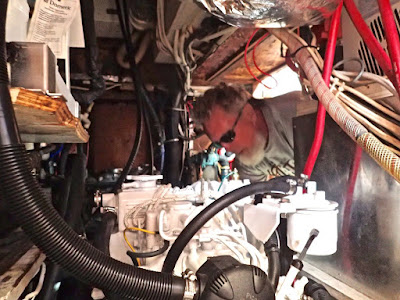 Michael was right in there hooking up stuff while Bruce worked on the other end.  I think Alan was in charge of the remote panel.  They had to increase the size of an existing hole for the panel and things didn't quite go together right. Alan came back the next day with a piece of wood cut to fit the hole and some varnish for us to make it look like the rest of the wood!  How awesome is that!


The guys worked hard and it almost looked like it would be done on the second day.  But Nobody could figure out the electrical hookup.  We couldn't find any of the old wires from the previous generator... at least couldn't find them already hooked to the panel... So I had to get in touch with Mike, the guy who took the Panda out.

I sent him photos and we went back and forth for a while... He told me where the wires should go on the panel but there were no wires there!

We needed to get some more parts and couldn't find the right things here...  Eventually we did... but it wasn't easy. 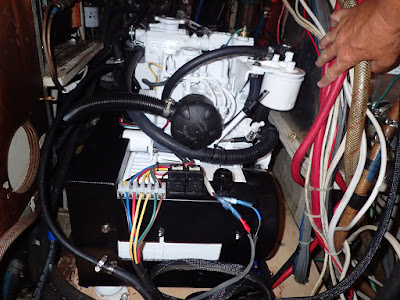 Throughout this process we also had remote assistance from another resident expert.  John-Michael from Pura Vida was helping us via message and photo... He and Kimberly installed the same generator as this one in their boat... in place of their old Fisher Panda!  I think JM was avoiding work of his own to help us out so we owe them a drink!

Everyone was tired and hot and maybe a little disappointed that it wasn't a total slam dunk.  But Bruce and I were beyond thrilled that we had come this far! 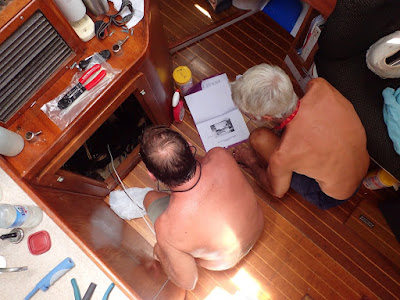 The problem was that the two guys helping us on site didn't want to commit and mess anything up.  Both could have done this job on their own boats, but being unfamiliar with our setup, they were hesitant... and we didn't blame them.  We certainly don't want to catch our boat on fire!

In comes Jesse from Pyxis to the rescue!  He and Sally arrived at just the right moment and Jesse offered to come and take a look... Between the two of them, Bruce and Jesse finally agreed on the way it should go, and yes, it went where Mike said it did...  Anyway... after all of that bla-bla-bla...  THIS happened! 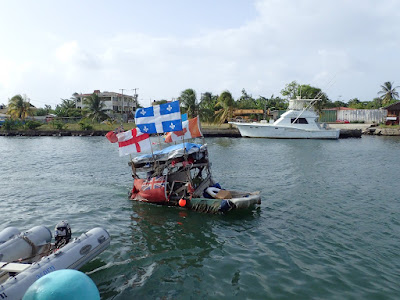 Let the good times roll!  We've got a life-changing machine installed in our home now and we've got friends around who deserve a huge HUGE Thanks!  We could not.... Could. NOT... have done this without their help and vast pools of knowledge and expertise! 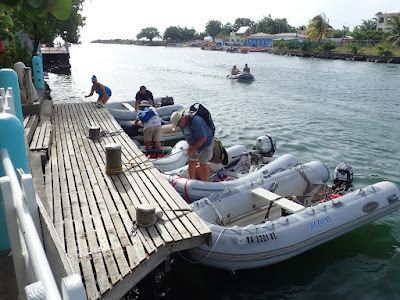 Now that the work was done, it was time to have some fun!  We all met up for happy hour at that place on the canal... you know the one that never has any business!  We'll give them some business!  We took over their place.  They didn't even have anything cold when we all pulled up and docked on their pier...

You can not imagine the weight lifted from our shoulders!  First, the chore of dealing with charging our batteries every day... then the looming giant boat project... Now all is light and wonderful!  We can't wait to get back into a different routine and live in comfort.  Heck... we can even use the air conditioner again if we want to... and I WANT TO! 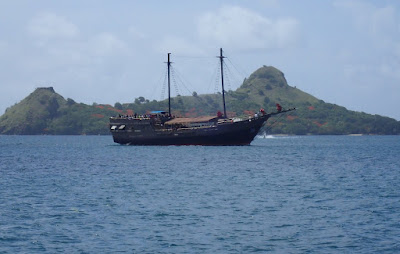 Our paid days in the Lagoon were done so we moved the boat outside into the pretty water where we could use the water maker again.  It was nice having a different view.  Our friends were all here and something was always going on... 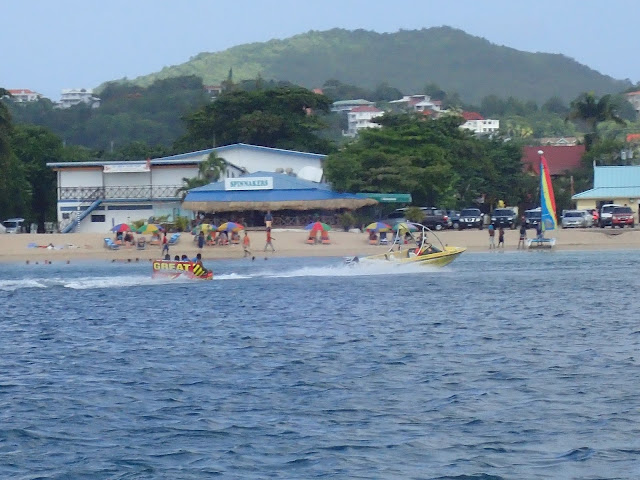 We've enjoyed our time here in Rodney Bay and really considered remaining here through the summer in the protected waters of the Lagoon... But we decided to move on down south with our friends...  We all watched the weather and waited for the opportunity to move down to SVG...  Looks like it will happen later in the week!