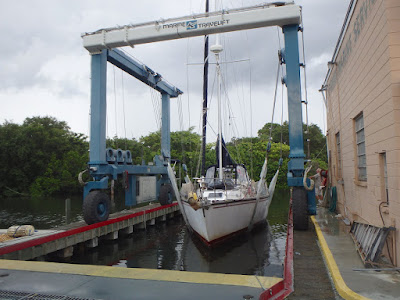 It's gotta be done.  Every boat owner dreads it.  Our time had come.  The Bottom Job.

Upon arrival in the St. Petersburg area, our first order of business was to have the boat hauled out so that the Max Prop could be removed and replaced with our old fixed prop. 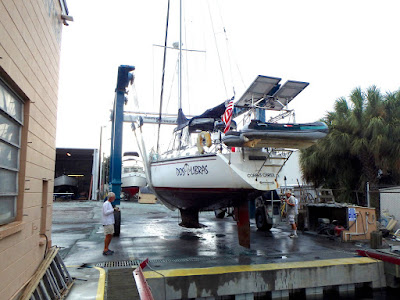 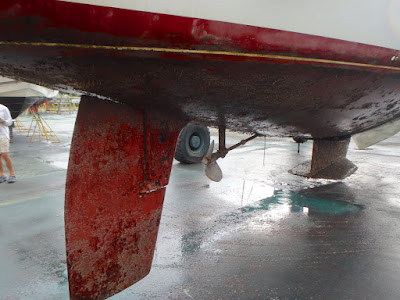 The last time we hauled the boat back in February , 2014, we were told that there was some "play" in the blades that would need to be addressed.

We chose Embree Marine on recommendation of a local Facebook friend.  I will say right here that after it was all said and done, the folks at Embree have impressed us with their knowledgeable and professional service from start to finish.... but I'm getting ahead of myself.

We scheduled a "quick haul" so that Embree could send in our prop for servicing and while we were at it... Bruce got to do a quick scrape of the underside to get the barnacles off.  He was so happy to be given the opportunity instead of paying someone else to do it... 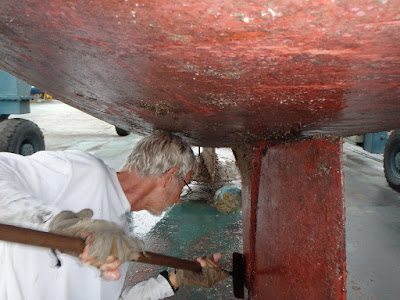 He worked away while the old fixed prop was installed and they splashed the boat again, a little bit lighter now that the bottom is cleaner.

A bit of history here, we bought the boat in 2012 and had a complete bottom job done in October of that year.  We had it painted with Micron Extra, thinking that it would be good for 2-3 years.

In February of 2013 we had the boat hauled out for some maintenance work and re-applied a layer of paint along the top two ft. of waterline, the keel and the rudder.

Then came Marathon...  The waters in Boot Key are a playground for marine growth.  We did not know this until we had been there for a month and realized that we were seeing unprecedented amounts of shells growing on our bottom.  So much for our bottom paint!  It was literally ruined and the decision to continue on to the Bahamas before we did yet another haul out was a difficult one.  Our deciding factor was that there shouldn't be much growth in the barren waters of the Bahamas... so we put it off.

Now that we're back, it's time.   We scheduled our haul out for the 14th of September giving them plenty of time to get the prop back while we road tripped to California!

Fast forward, here we are again at Embree.  We pulled up to their dock and parked the boat thinking that we were in for about $2,700 for the bottom job and another $1,200 for the prop repair...  As we waved goodbye to our home, packed the cat and our clothes into the car and happily drove away... we had no way of knowing what our future would reveal... Oh and while we're at it... throw in a wash, buff and wax of the upper hull sides too.  What's another $750 since we're out???

Some days later we came to visit the boat and see how things were going.  We had received a call to get authorization to fix a little "bubble" that they found and we told them to go ahead. When we arrived we saw that they had been wrong about the bubble.

They said that while the boat was drying out, they found this spot that was weeping.  Thinking it was just a blister, they began to grind it out... but it just kept going and going until there was THIS!

Our first thought was "West Bay" So we suffered some damage after all...  But in talking to Chad, he assured us that this was an old repair from a (hard) grounding by some prior owner... Our time in West Bay must have just reopened this old wound.  Of course throw this onto the growing pile of things to fix (and pay for).  We are just SO happy to have found it by this method instead of somewhere (insert ominous dun dun dun dunnnn) out there...

There was also a recurrence of an issue we knew about and had fixed before... The spot where the keel joins the hull has experienced some "flexing" and the epoxy needs to be reapplied.  They assure me this is common and not dire. 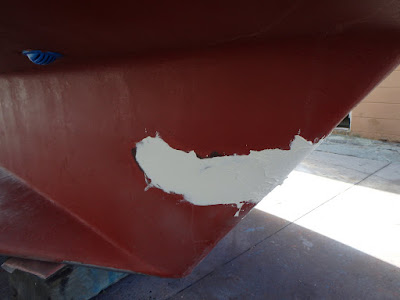 Oh and what do we have over here?  I'm still not sure what the deal is here... They told us it was a bit of "dry rot".  Is there such a thing?  They weren't worried at all... the keel is lead.  It's just a bit of water under the paint... They ground that out and repaired it... no sweat.  By this time we've stopped asking "how much".  It's just not worth the stress... and besides, I'm not so good at math! 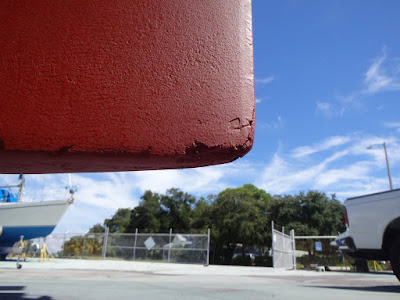 And then there's this.. Another casualty of our West Bay experience.  I remember the moment this happened very well.  I was at the helm with Bruce on the bow.  I could feel the wheel jerk as the rudder hit a rock beneath us each time the boat dropped into a steep wave trough... That was a bad night. 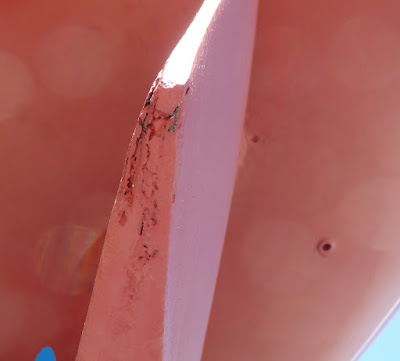 It looks bad but there was no water inside the rudder... so there's that.

Go ahead and fix that up while we're at it.  Can't head back out to the wild with that down there... 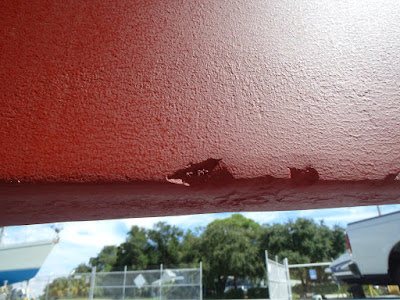 We returned to the boat again later in the week to check on the progress.  Things were moving right along.  The repairs looked good.  Bottom paint was gong nicely and the prop was all back in place with new zincs on the prop and the cutters. (the boat came with a set of spurs or cutters that will cut through a line (think lobster trap) that wraps around our prop shaft.  If we've tested them we don't know it... but we've never had anything wrap around the prop shaft... ) 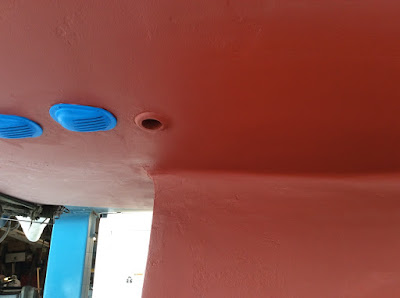 One thing that they did here at Embree that impressed us was to take off the through hull scoops and paint them with Vivid antifouling paint, then re-bed them.  Nice touch! 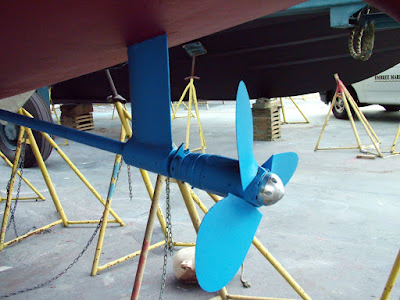 They also used this on the shaft and prop. Supposedly it lasts better on the metal parts... We shall see. 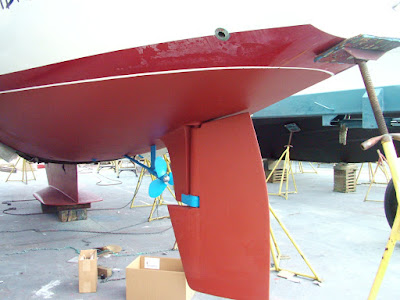 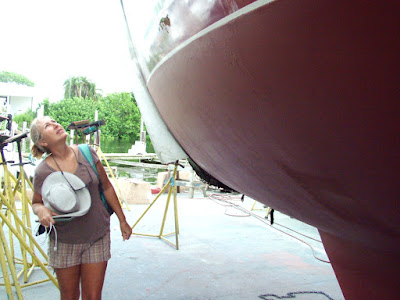 The next time we visited there was a guy buffing and waxing the hull.  What he had done already looked great!  We've done this job ourselves before and it's not much fun... Looks like things are winding down with only the new through hull for our water maker discharge left on the list of things-to-do.  Only one more day and they'll splash on Tbursday morning.

We've been living with our daughter these ten days and although we are eternally grateful for her hospitality... we are SO ready to be back in our own home. 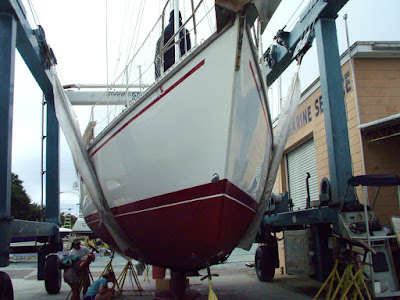 Thursday morning we arrived at about 9 am after shuttling our car to the marina.  Dos Libras was already hanging in the slings ready for our final inspection before she goes back where she belongs. 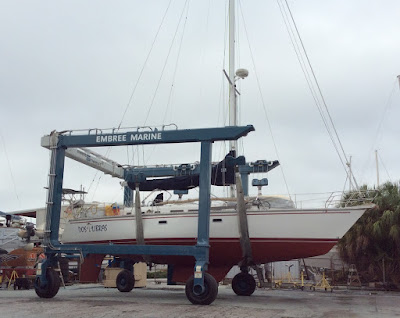 We are thrilled with how the hull looks and glad of the repairs done.  We waited while they moved the boat through the yard and lowered her gently into the water.

They did a leak check and even washed the deck and cockpit for us.  Then we were directed to go up into the office to pay the bill...

After going over it all, we are happy with the charges, if happy is a word that can be applied in this case... 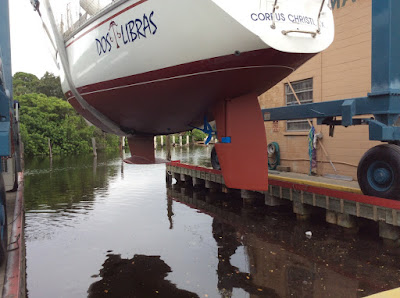 We had a lot more stuff added to our initial base estimate but none of that was the yard's fault.  We feel that the charges are fair and the work was good.  The employees were all very professional and environmentally correct. 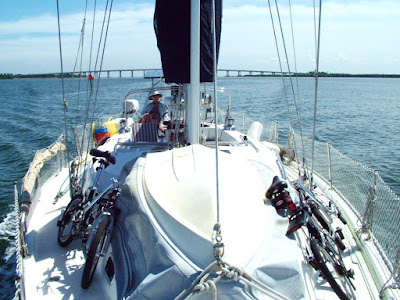 We descended the stairs from the office in somewhat of a shell-shocked fog state, but it began to clear as we climbed aboard our beloved home.

What's next?  We have about five weeks left in Gulfport during which we will install our water maker and do a whole list of other boat projects with hopes of being ready to head out again November 1.  The big stuff is almost over... If I make it through this next month without losing my mind, it will be a miracle.

Let's just hope there are no more costly SURPRISES!