Well, maybe that's a lie.... but after living on a sailboat for almost three years, I wish I HAD! (and I think Bruce does too)

Our time in the Bahamas was idyllic (well... because it was the BAHAMAS!  But also) in that nothing broke while we were there.  Really.  We met quite a few people who were waiting around for parts, complaining about how much the shipping cost and how long it took to get things in the Bahamas... but we were lucky.  After all of the money and heartache we poured into Dos Libras prior to our escape from the US, we were granted a respite.

But the moment we returned to the US back in June, we were smacked with one thing after another in rapid succession.  For some mysterious reason, most of the problems were plumbing related.

First off let me just let you in on a little secret that nobody tells you.  When you live on your boat and use the head all the time, you will obviously be pumping out regularly.  We could usually go about 2 weeks on our waste tank capacity at the end of which we would either need to find a pump out station (that worked) or take a day trip out past the three mile limit to lawfully pump our waste overboard.

The regularity of these activities kept our deck plate caps and our macerators in good repair.  Well, when you leave the US and there are few (or no) pump out options, waste is pretty much universally dumped overboard with each flush, bypassing the tank and giving the macerator and the deck plate cap a long break.

This is when it happens.  The crud that resides on and in your macerator and deck plate cap will slowly begin to harden until they become impossible to move.  Thus, upon our return to the US and the return of the need to use pump out stations (or macerate the waste out past the three mile line)... we realized our mistake.  We should have cleaned our equipment.  But we did not... and we've learned that lesson the hard way.


Things have finally settled down enough for us to muster the nerve to tackle this project.  We've been working on trying to unscrew the deck cap for WEEKS, using PB Blaster and many other concoctions to try to penetrate the hardened sludge that is keeping the cap firmly in place.


We've tried so hard that we've actually elongated the two small holes that the deck key fits into to unscrew the cap...  They're now shaped like ovals and the deck key repeatedly breaks out of the holes when we try to put the power to it.

The deck plates for both of our heads were frozen when we came back to the US, but we were able to get the cap for the aft head (in our bedroom) loose, we we've been using only that toilet since our return to the US...  We are READY to have our other potty working again.

Unfortunately we've been unable to get lucky with the forward head and it remains frozen solid for now... So we turned our attention to replacing the dead macerator so that we could at least empty the tank offshore when needed.

My fear (and the reason for putting this off for this long) was that "waste" would pour out of the hoses and into the boat when we removed the old macerator.  I prepared for this by placing a tough trash bag beneath the workspace and lining it with an absorbent pet pee pad.  I also had on hand, a paper towel to stuff into the hose and a baggie and zip tie ready to cover and neutralize the hose.

All of my careful preparations and time spent fretting beforehand were for naught... barely a drop came out of the hoses when we loosened them and it was super easy to just pop the new macerater in place of the old one.  We didn't have the right hose clamps to replace these rusty ones, but that's an easy fix.... throw it on the pile.

Yay!  So now we can run some fresh water into the toilet to "freshen" the hoses in there and would you believe it... the electric pump that flushes the toilet groaned, squealed and then blew a fuse when I pushed the button.  We flipped the breaker back on and I pushed the button again...  This time when silence fell, the pump was dead.  WTF???  I guess the "stuff" that was inside the frozen macerator was also inside the potty pump.  DAMN!!!

I went online to price parts to repair or replace the pump and found them to be very close to the price for a new manual toilet.  Decision made.  I've always hated that electric flush anyway.  It can't "handle the load" (if you get what I mean), it's loud and provides NO privacy for someone trying to be sneaky about going to the potty (guests are like that), and the lights always dim when the motor sucks all the amps in the house!

We bopped over to the West Marine and picked up a new manual flush potty and some new hoses and parts for the vented loop... and went to work. 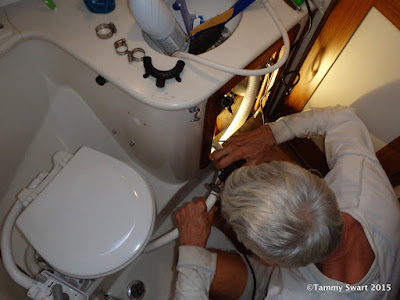 It wasn't really a tough job, just time consuming as there is not a lot of room in the head so Bruce did the majority of the work himself.  Drilling new mounting holes was the most difficult part of the install as the hoses (which are usually the challenging part) were very short and almost a straight run with no sharp turns. 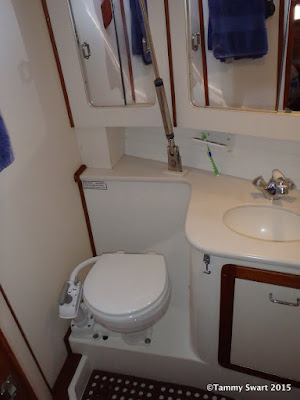 Moving right along...  to the aft head.  The shower fixture has become unreliable.  We had this problem once before.  It's an old but well made fixture and shortly after we got the boat, it started to malfunction.  Back then, we took it off the wall and poked around inside looking for obvious problems... finding none, we put it back on and figured we would look for a new one... lo and behold, it started working again.  And worked until now. 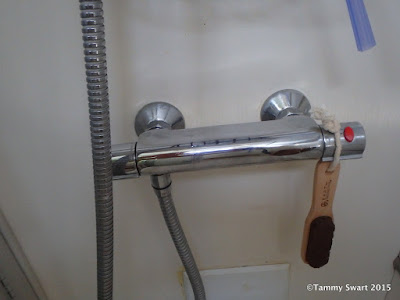 It isn't just something we can go and pick up at Home Depot and we can't find anything like it in marine chandleries.  It's got 6 inch centers and has the on/off handle on one side and a mixer (to set water temperature) on the other, with a shower hose coming out of the bottom.  When I found similar fixtures online the prices STARTED at over $900.00!  USD!!!  And that's just not happening!!!

Sometimes you just get lucky... after trying our luck at Lowes and Home Depot (we were there looking for something else), we were pointed to Palmer's Hardware here in St. Petersburg.

Palmer's is an old fashioned "real" hardware store... not just a place to buy hardware, but a place where you can get hard-to-find bits and also...  a place where there are people who can FIX stuff!!!  We brought them our shower fixture and after one trip to fix the internal mechanism, and another trip for him to fabricate new gaskets, we have a working fixture and spent less than $60 instead of the hundreds we were looking at spending before. 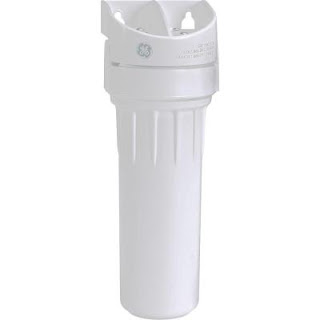 He also resolved our issues with our OTHER project... and saved us MORE money as next we turn to our galley.  There were actually two issues in the galley... One, we had a leaky water filter that needed to be replaced.  For that, we found a simple and inexpensive under-the-counter filter that will do nicely.  Since we're installing a new water maker, we will likely not have water in our tanks that is extremely impure... I just want something to filter out sediments and such so that we can drink the water out of the tanks.


But the other problem was a rapidly deteriorating mounting structure for our non-pressurized fresh water pump...  It was installed using sub-standard washers that have been rusting and flaking away for months.  It not only looked horrible but left rusty flakes all over the place.  We literally chipped the rusting mount out from under the fixture and wrangled with the old and corroded flange to remove the old fixture.  We purchased a new one from West Marine (we couldn't find anything comparable elsewhere) and took it home to install...  Due to the thickness of our countertop, we couldn't just pop it in.  We needed parts.  So... we took the old and new fixtures to Palmers and an amazing thing happened.

He took our old fixture, which was much better than the cheaply made new one, back into his workroom and returned it to us all shiny and looking almost new in minutes.  He ground off the corrosion and they found us parts to re-install our old fixture so that we could return the crappy new one to West Marine and get our money back.  Palmer didn't even charge us for this!!! 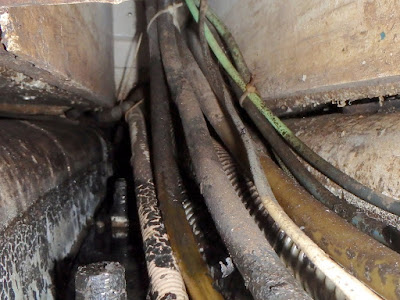 So!  We're feeling pretty good about life now that we've accomplished something AND saved a bit of money.  We turned our sights to our next problem... finding the suspected slow leak in our hoses somewhere after the freshwater pump.  Every now and then, the pump will cycle even if we aren't using water.  We think there might be a leak somewhere.  So we started pulling up boards in search of   a possible culprit.  After about half an hour of contorting and peering into dark and dirty places with no luck... we decided to table this one for another day...  Boat projects never end... and hey, we may meet a nice plumber!