How Much Is Your Life Worth? Sort Of A Rant.

One little holdup.  That's all it takes.  Back in 2012 we purchased a life raft.  There was supposed to be one on the boat when we bought it but the seller had left the raft in Germany... so as part of the deal, he had to give us $1,500 back... for the value of the life raft.  We used that to purchase this Switlik 6 man raft.

Before we set out cruising, we had a different idea about how it would be.  We were in a frenzy.  We thought we were sailing off the edge of the world.  If we knew then what we know now, we would never have bought the raft.  But we did...

And then came the insurance issues.  If you HAVE a life raft on the boat, it MUST be certified.  Or, at least if the insurance company KNOWS you have a raft... it must be certified.  The surveyor we used in Marathon noted that the raft was out of date and listed it in the Recommendations List on our 2014 survey.

To be honest, when it came up last last year, we intended to do something about it but just forgot.  We had planned to take it off the boat and store it on our daughter's garage until such time as we were prepared to sail off the end of the earth.  Really!  Well... it came up again this year.  The new insurance company says we need to get it inspected or take it off the boat.  So even if we spent the money this year, it would have to be done again next year, and the next... or our insurance company COULD say we're not in compliance if we had a claim.

This started a frenzy of mulling... What to do???  We don't want to just throw it away.  It must be worth something.  Besides... if you were stranded on a deserted island and your choices were:  A.  a life raft that may or may not inflate... or B. NO life raft at all.  Which would YOU choose???

Safety equipment is just so darned expensive. The last time this raft was certified back in 2011 it cost over $1,500.  We really won't be sailing off the edge of the world so how necessary IS it???  So "people" ask the question:  "How much is your life worth?"  Can you really put a price on it?  Well the people who sell safety equipment sure have!!!  And it ain't cheap!

WHY can't we have a life raft on board that is out of date?  If we're in a position where we need it and it doesn't inflate, or doesn't work in some other mysterious way... say, the eye wash is expired by a few months (oh the horror)... Well I would say we were in pretty deep shit already!  Same deep shit as we would be in without a life raft at all!

Are they thinking that we would be more reckless and make bad decisions because we're "SAFE"?  Do they think we'll just go ahead and sink the boat... "Hey, we've got a life raft there... it'll save us!  Sounds like a hoot, we've got nothing else going on today...!".

OK say we have all the latest safety equipment on board.  Before we even have time to have any fun out here, it's all EXPIRED!  Safety equipment is essentially DISPOSABLE!


So they make it so cheaply that it won't last?  No... they don't.  They make it like they would anything else... Some minimum wage earner is on a production line somewhere stuffing whatever goes into safety flares into that tube and he's not worried about us.  Then we get the flares and the salt air does it's work... and something happens and we try to shoot off one of those flares.  Instead of doing what it's supposed to do, it just goes Phomp!  And somebody sues somebody because it didn't work.  So now the price for flares goes sky high and they put a ridiculous expiration date on them.  And to top it off, you have to properly dispose of the out-of-date flares to keep from blowing your own face off if you try to use them!!!  You can't even keep them as "use firsts".

While we were looking at all of this, we inspected our EPIRB.  We just renewed the information online so that if it went off, the information in the SAR system is up to date.  It also had a battery and a hydrostatic activation device that are on limited time... we've got until May of next year until we have to make another decision.  Buy a battery that costs close to what a new EPIRB would cost?  I think not.  It forces us to make tough decisions.  What IS our life worth???

Safety equipment is like insurance.  If you never need it you'll never know if it would have performed as it should.  But if you DO need it and it doesn't perform... what then?  It's money spent for peace-of-mind.  Everyone must make the decision for themselves.  How much IS your life  (and your peace of mind) worth?

Talking to Dan over at Solution One Maritime, we were at least able to gain a bit of clarity.  We took the raft to him and he inflated it.  He took the time to give us a private lesson in Life-Raft-101 and we can't thank him enough!  While he was going through it all, we expressed our frustrations.  He can't really SAY OUT LOUD, the things that we wanted to hear.  But he hinted at the fact that if your raft is old (like our 1997 Switlik) or out of certification date... you're probably still OK.  And there is still a chance that your safety equipment will fail even if it IS within it's limits.

More importantly, he put things into perspective for us about the raft.  Obviously since it inflated as it should...we would have been fine if we had done nothing at all.  Things don't automatically self destruct on the expiration date.  The thing worked.  But even if it had not worked... with the EPIRB and the waters we'll be cruising, we have a reasonable expectation of being rescued and home for dinner (Dan's words).

So our decision is made.  We said goodbye to our raft.  We took the unexpired goodies and the red ditch bag from inside the raft and we left it with Dan to dispose of as he will.  It would make a great backyard pool or a nice float toy for somebody's condo.  We will remove the cradle from our aft deck and reclaim that living space.  We will epoxy in the mounting holes that were drilled in our bedroom ceiling and there will be nothing left but a minor blemish on our deck and the memory of this lesson learned. 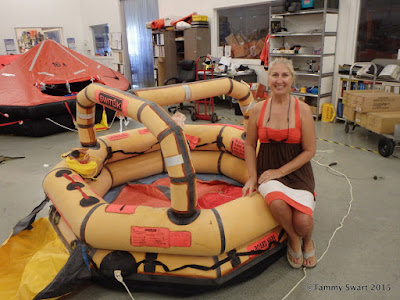 If we ever do cross an ocean, we will rent a life raft.  (it's not going to happen)  We recently purchased a new product that replaces safety flares and never expires, the Sirius Signal SOS Distress Light.   It's pretty neat and even flashes S.O.S.

Next year when the battery and hydrostatic device inside our EPIRB expire, we will purchase a new one, maybe even two of the smaller PLBs (Personal Locator Beacons) that we can wear even exploring on land. 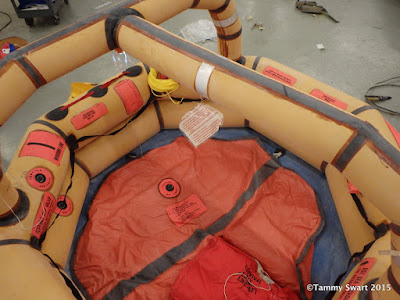 And this has also solidified our intent to purchase the new Delorme inReach tracking device so that we can reach our loved ones and the SAR team as well via satellite.

So like I said, the decision is an individual one that every Skipper must make.  It is a crying shame that we had to leave our life raft this way.

This experience has been an informative one.  We've spoken to industry experts and have a more clear information base upon which to make our decision.

But now that our decision has been made, we're moving on.    There is a raging debate out there:  Life raft or NO life raft.  We have gone over to the NO life raft side... for now.

I am sharing these pictures with you so that you can see what's in a life raft and how to use one.  Ours was a Switlik, but I'm sure that they are all very similar.


Most of the items inside were out of date or nearly expired.  Most likely it all would have been fine to use.  But there's that small chance they wouldn't... There's the rub.  How much IS your life worth and at what point do you draw the line?