Not wishing to squander any sunshiny days... we put this one to good use.  The weather was perfect for taking a drive and seeing some sights.

We left our Island home and found ourselves approaching the grand Ravenel bridge, one that we had admired from afar before now.  I busily snapped pictures as we passed beneath the towering marvel... 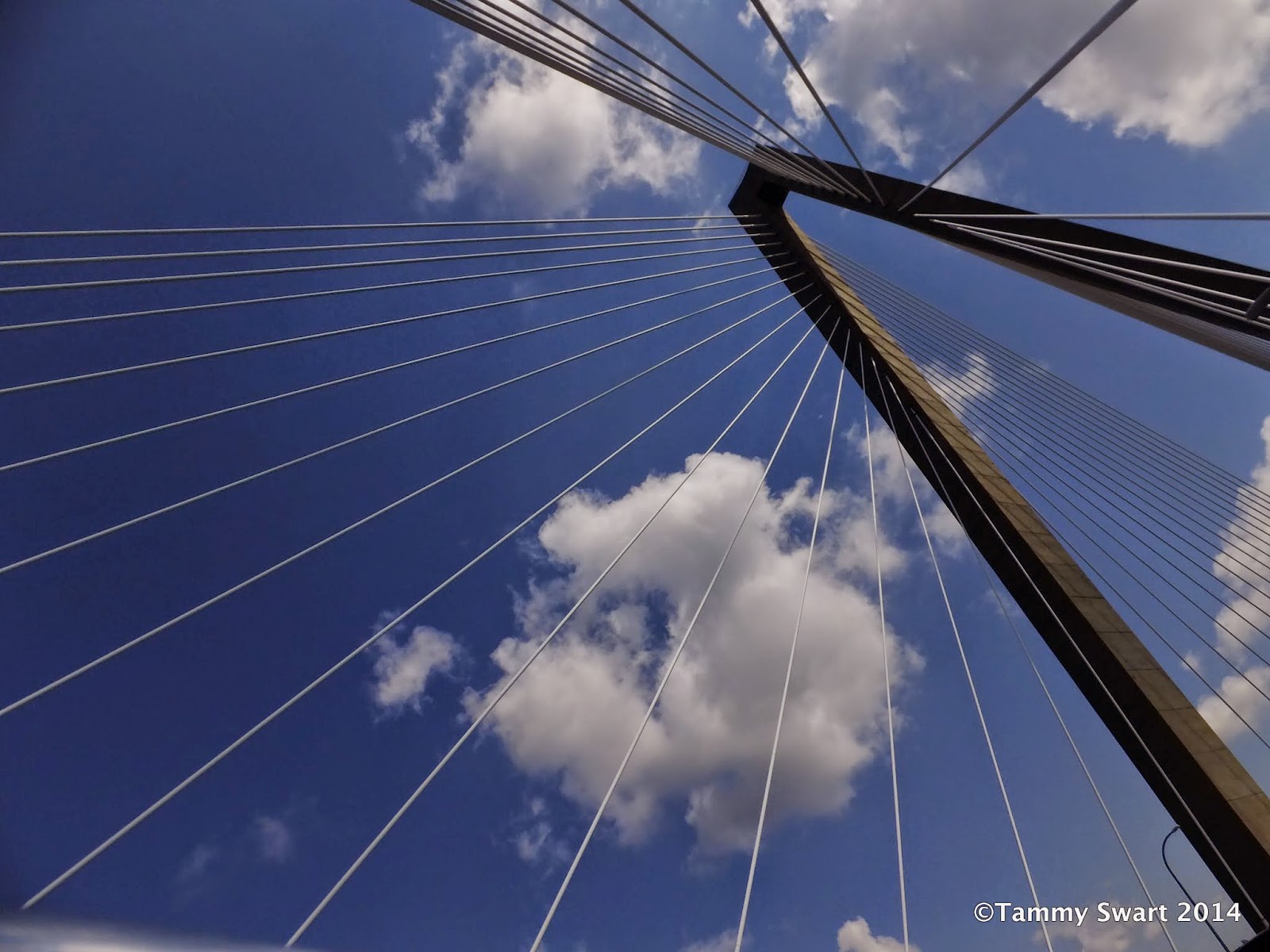 After driving across another bridge recently in rush hour traffic and feeling the structure tremble with the weight of all those cars and trucks, I have a new curiosity about bridges and how then can span such a distance without crumbling into the water under the weight.

There were people walking alongside the roadway and I mentally put this on my list of things to do.  Maybe a sunset stroll across would be fun. 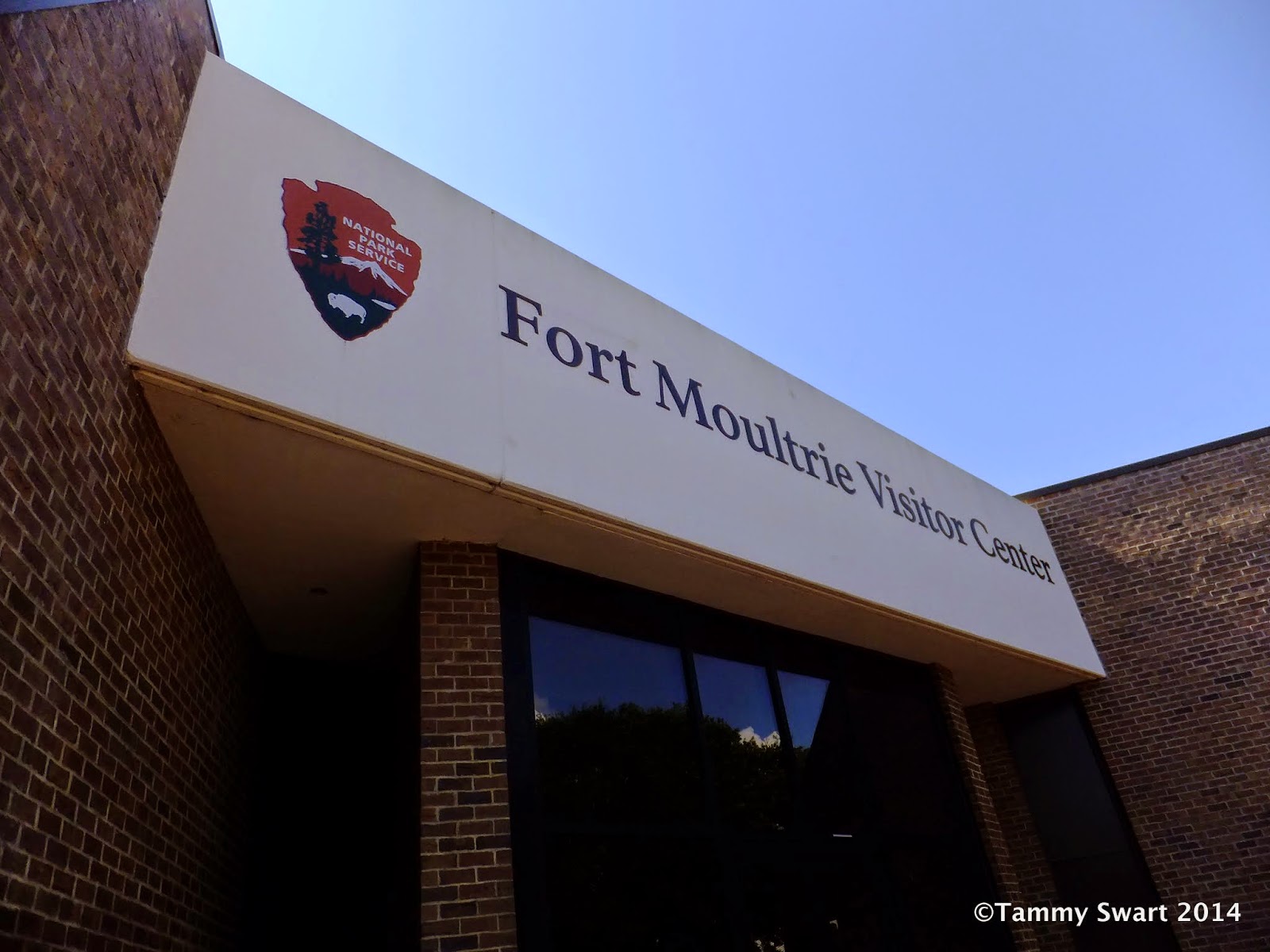 Fort Moultrie was our destination.  Driving through the streets of the town of Mount Pleasant, SC reminded me of the quirky Fernandina Beach.  We bypassed all of the colorful tourist shops and kept to our purpose.  My love of shopping has been curtailed by our lack of space to put things but my head still turns when we pass through these tourist towns.


Bruce retired from teaching history... but once a History Teacher - always a History Teacher... and visiting these historical sites always gives him a chance to see how much he still remembers.

Its fun to stroll through these exhibits with him and hear little snippets as he finds some things familiar. 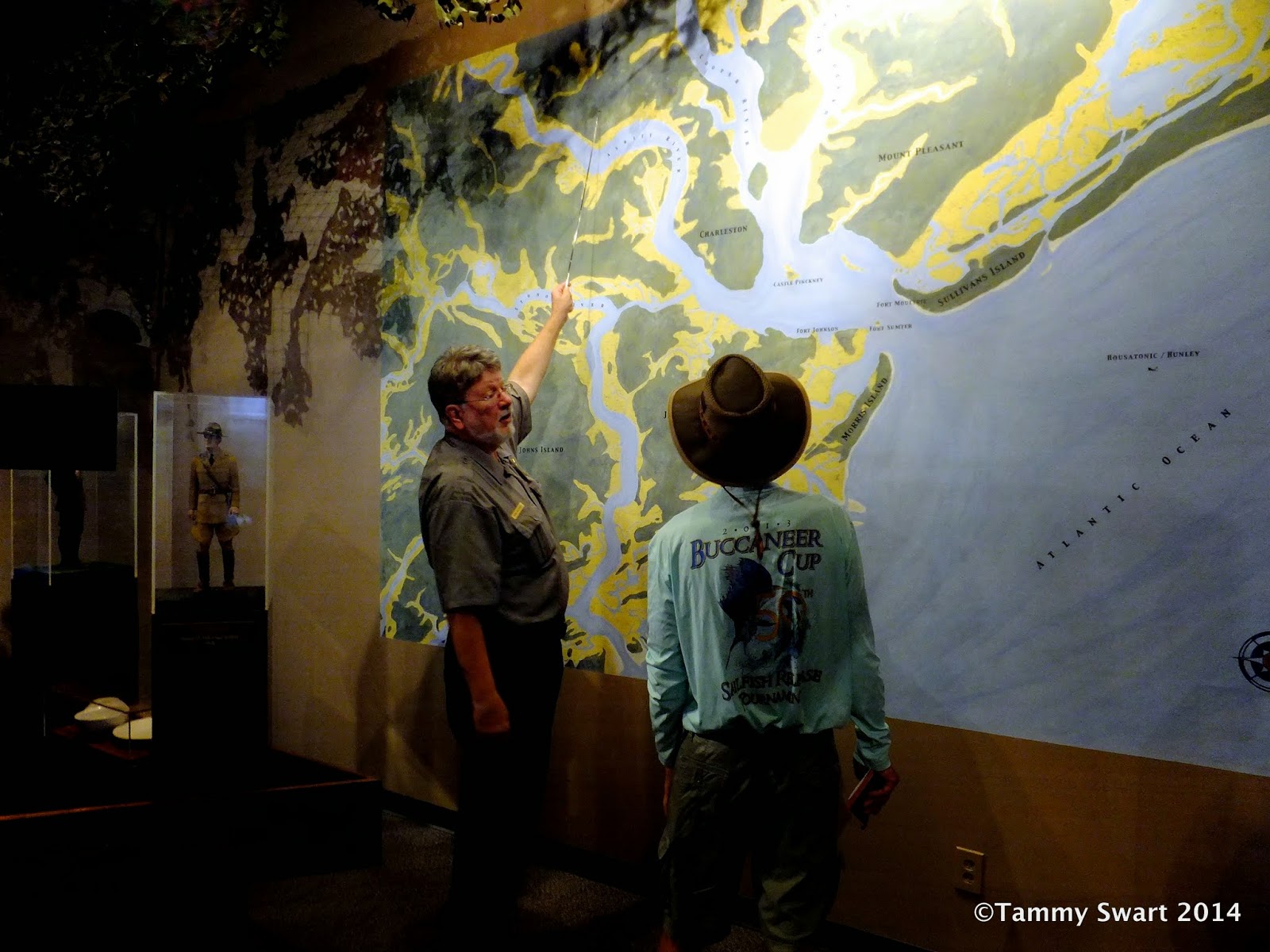 I think it's even more fun for him to grab the attention of some helpful docent who can talk history with him on his level.  My eyes tend to glass over after a very short time...

Here the docent is showing us the path of the British troops under General Cornwallis.

The fort itself has been rebuilt several times, beginning with the first fort of Palmetto logs.  It was eventually rebuilt using brick, but I was a bit disappointed when we were told that much of what we would see today is not how it was during any period that the fort was in use as a working military facility. 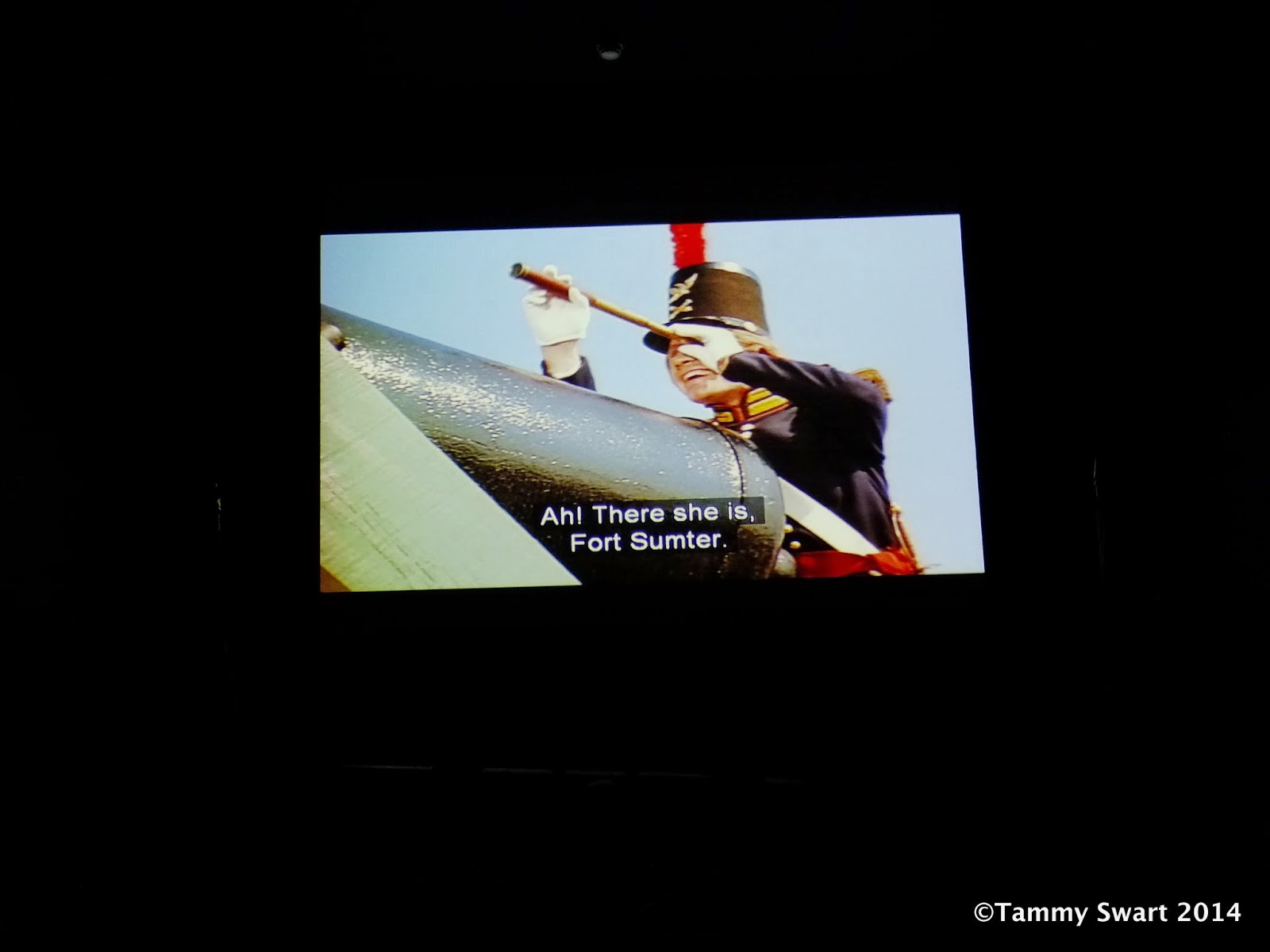 A short video introduced us to Fort Moultrie and took us through the many phases of it's military history.  The film was decidedly "cheesie" with a cast of men dressed in period garb and acting the part of the casual soldier, each telling his story of the fort as it was during his life.

Cheesie but informative none the less... It helped bring it all together in my mind so that I better understood the progression from one period to the next. 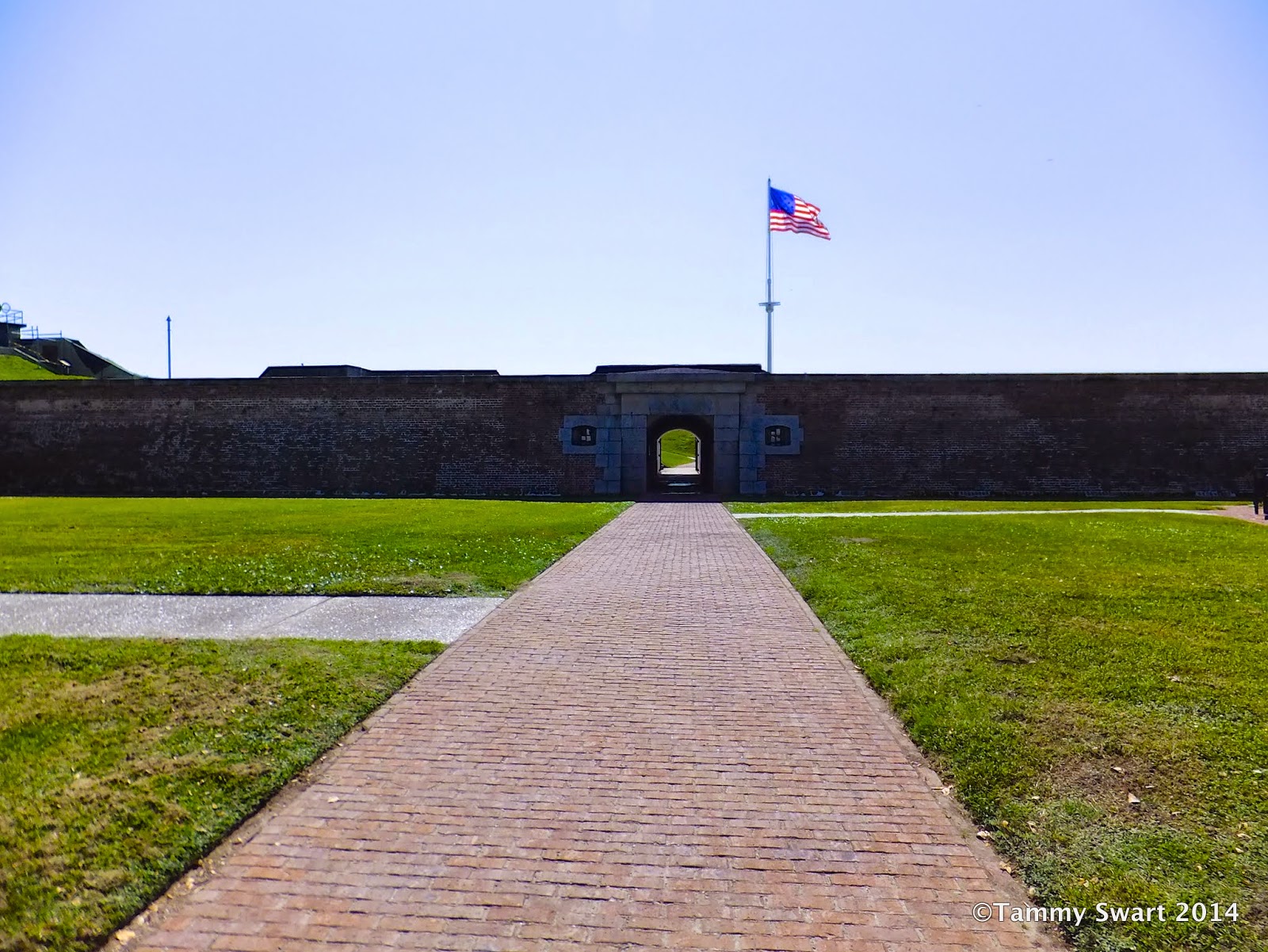 The ending left me thinking about the fact that there is really no longer a need for fortifications of this sort.  Walking towards the entrance to the fort, I realized that the evolution of military fighting has made these forts obsolete.  The film made this aspect of history seem very real.  No longer do we need dudes dressed in hot and scratchy wool outfits to stand behind a wall with a cannon... The instruments of war are far more deadly now... 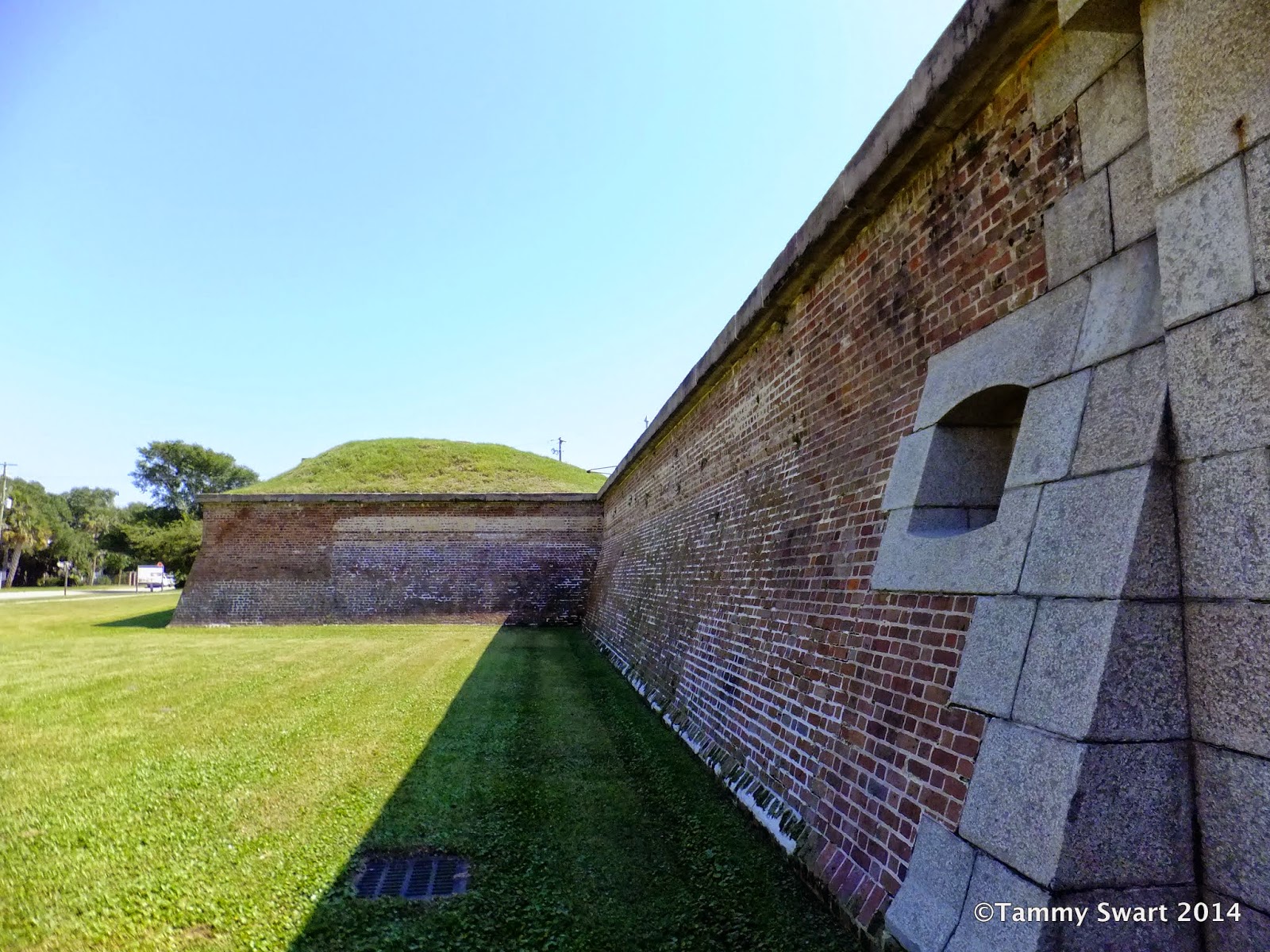 So you see... even though I seem to be here just looking for the next interesting camera angle... I AM absorbing something! 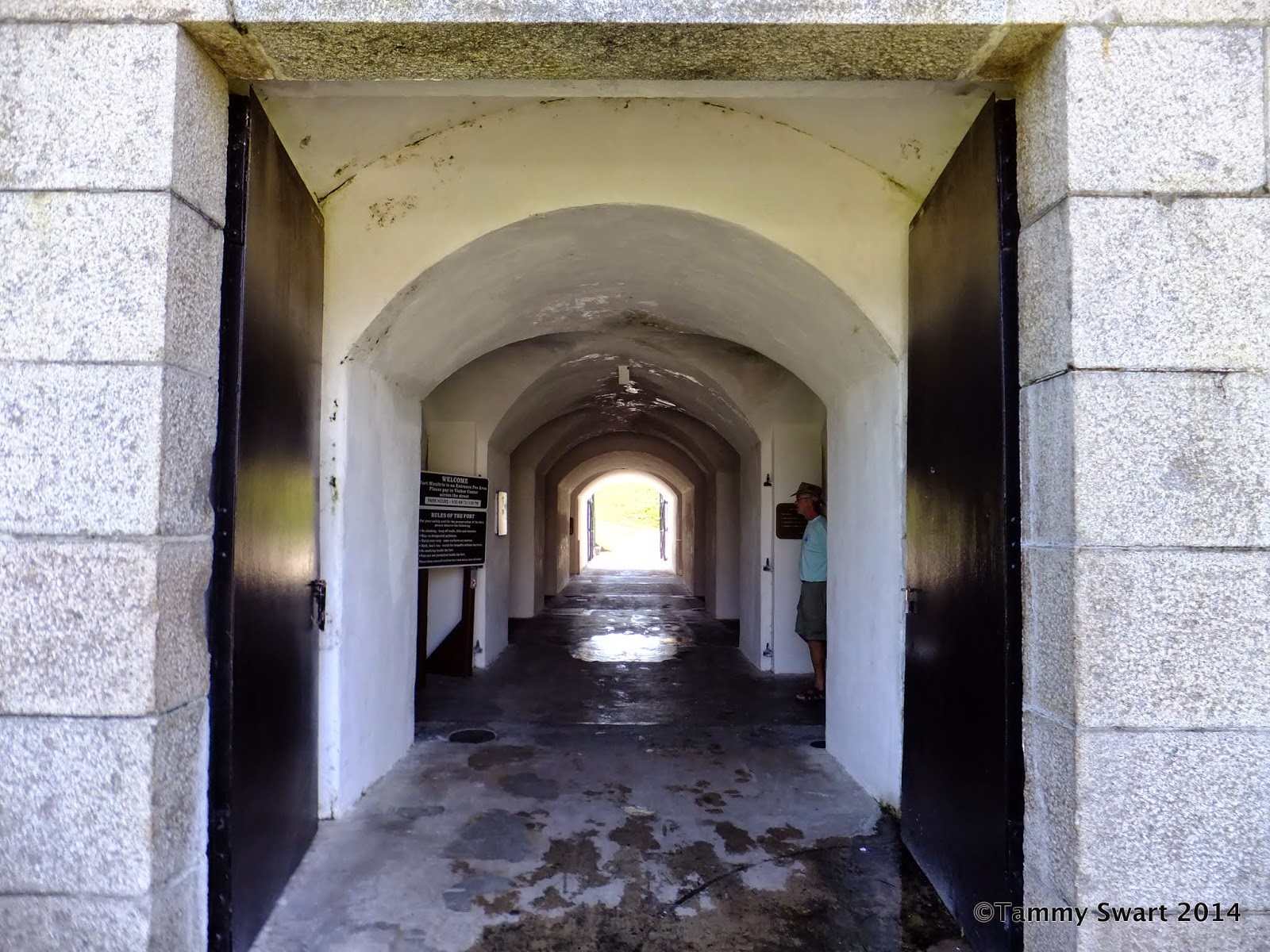 I followed Bruce as he explored the open doors that led through deep dark passages built beneath mounds of earth.

I tried to imagine these halls peopled with soldiers bustling to and fro doing their daily work. 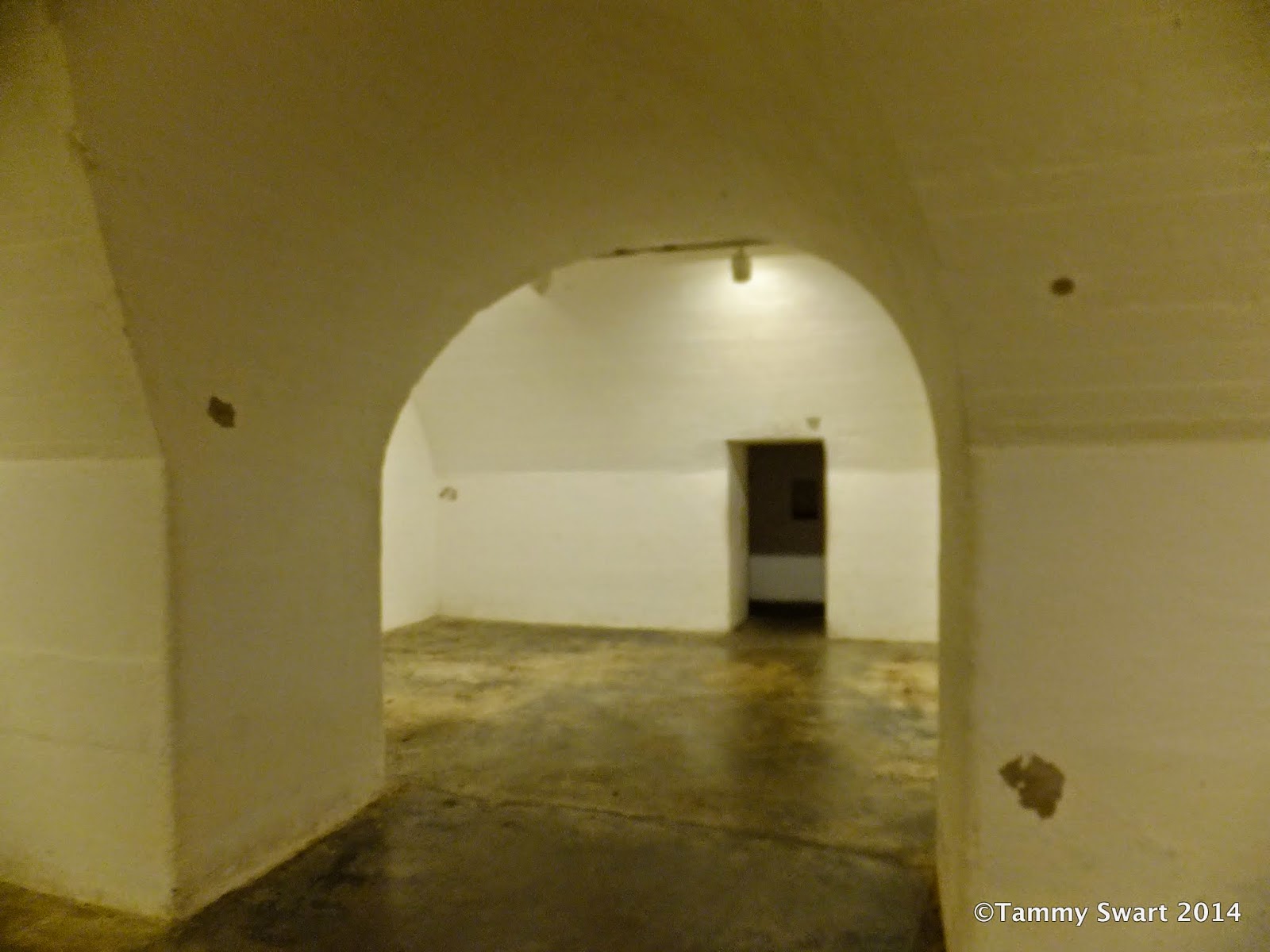 Now, these rooms are quiet and echo strangely when you speak inside them.  As we turned to leave one of the arms storage rooms, I would have sworn that our words continued to echo off of the walls after we had gone... 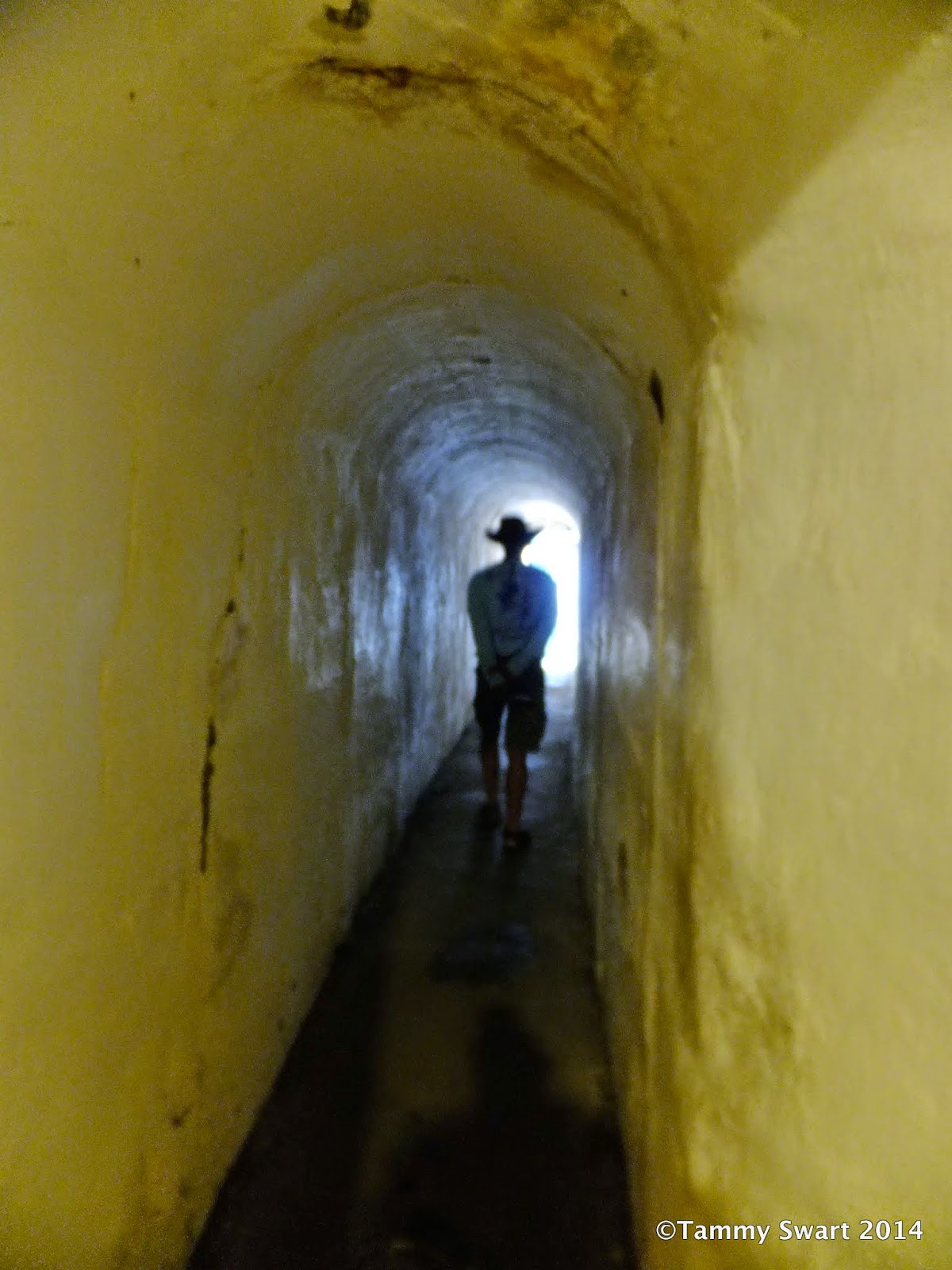 We explored all of the catacombs below ground and then ascended to the internal courtyard to have a look around. 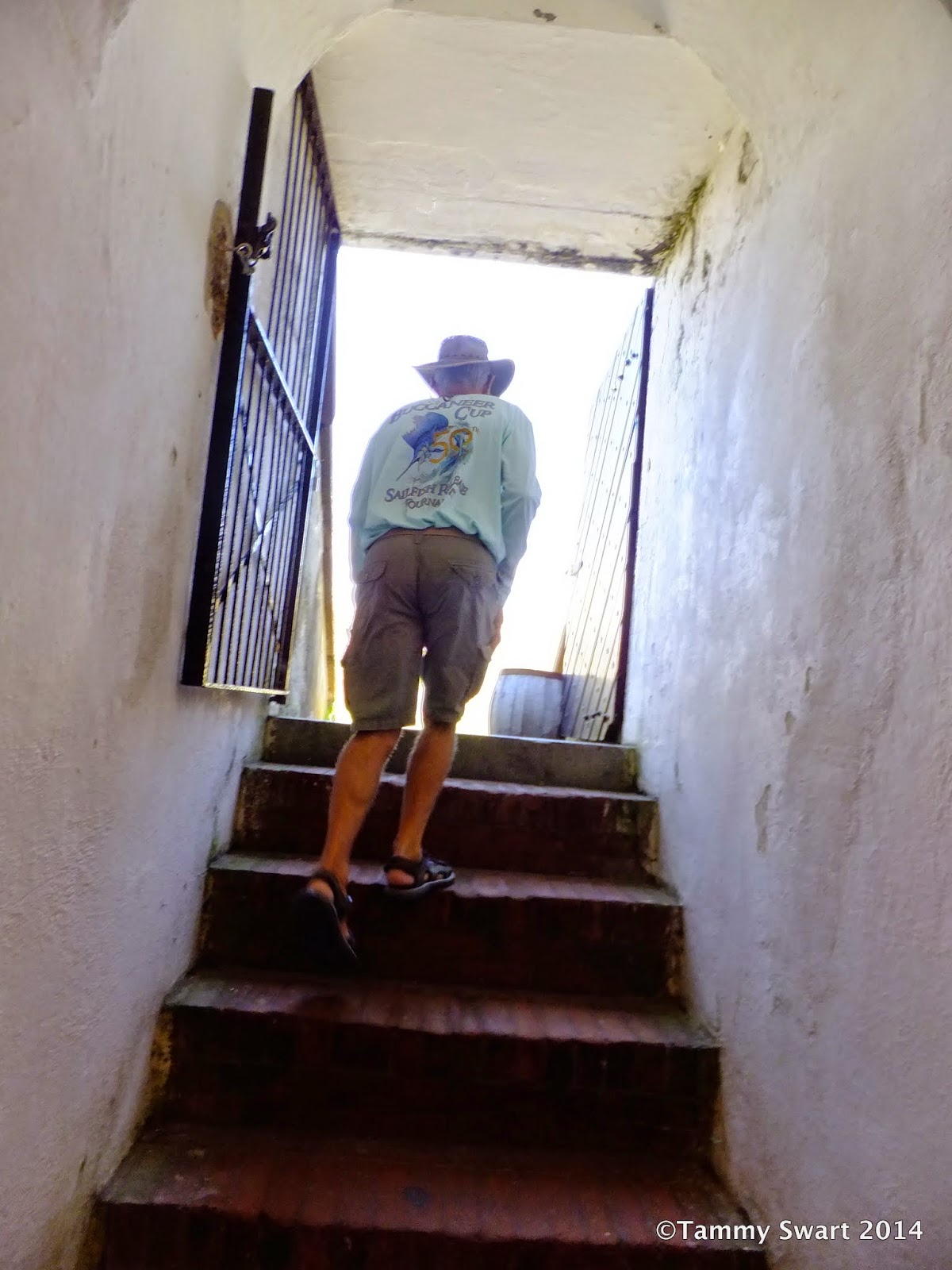 I was amazed at the thickness of these walls but comforted that they wouldn't collapse around us.  It isn't that I don't trust the engineers of the 1700s... well, maybe that's exactly what it is! 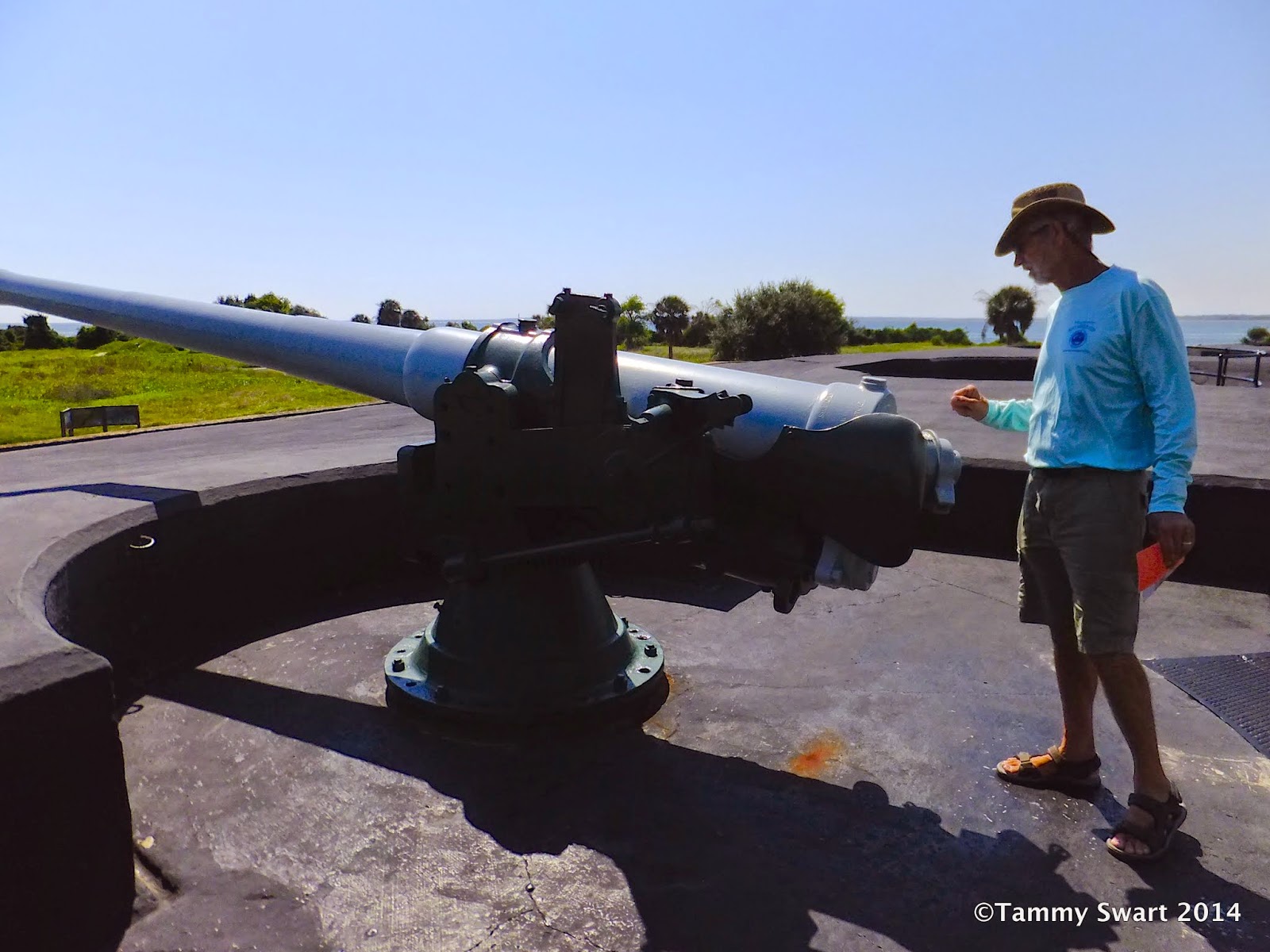 Back out in the brilliant sunshine, we climbed up onto the batteries where the many different types of cannons were displayed.

There is an impressive variety of cannons lining the walls of the fort and others still outside the walls on the grounds surrounding the fort. 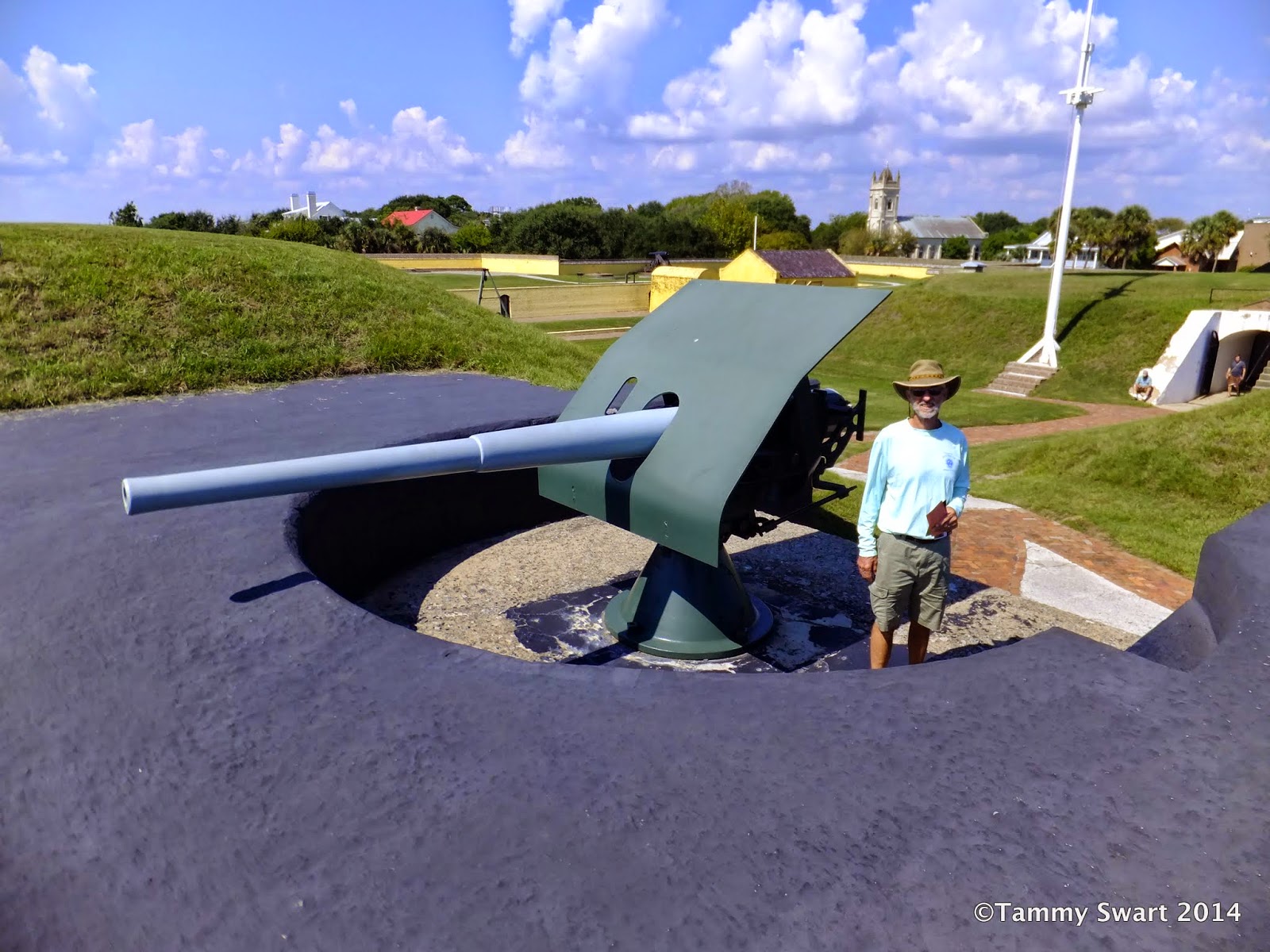 A placard posted near the beginning of each section along the way describes the range of years represented there.  It was interesting to see how the implements of war, as well as the method of fighting,  changes through the years.

Between the batteries were more thick-walled underground armaments where the ammunition was kept neat and dry. 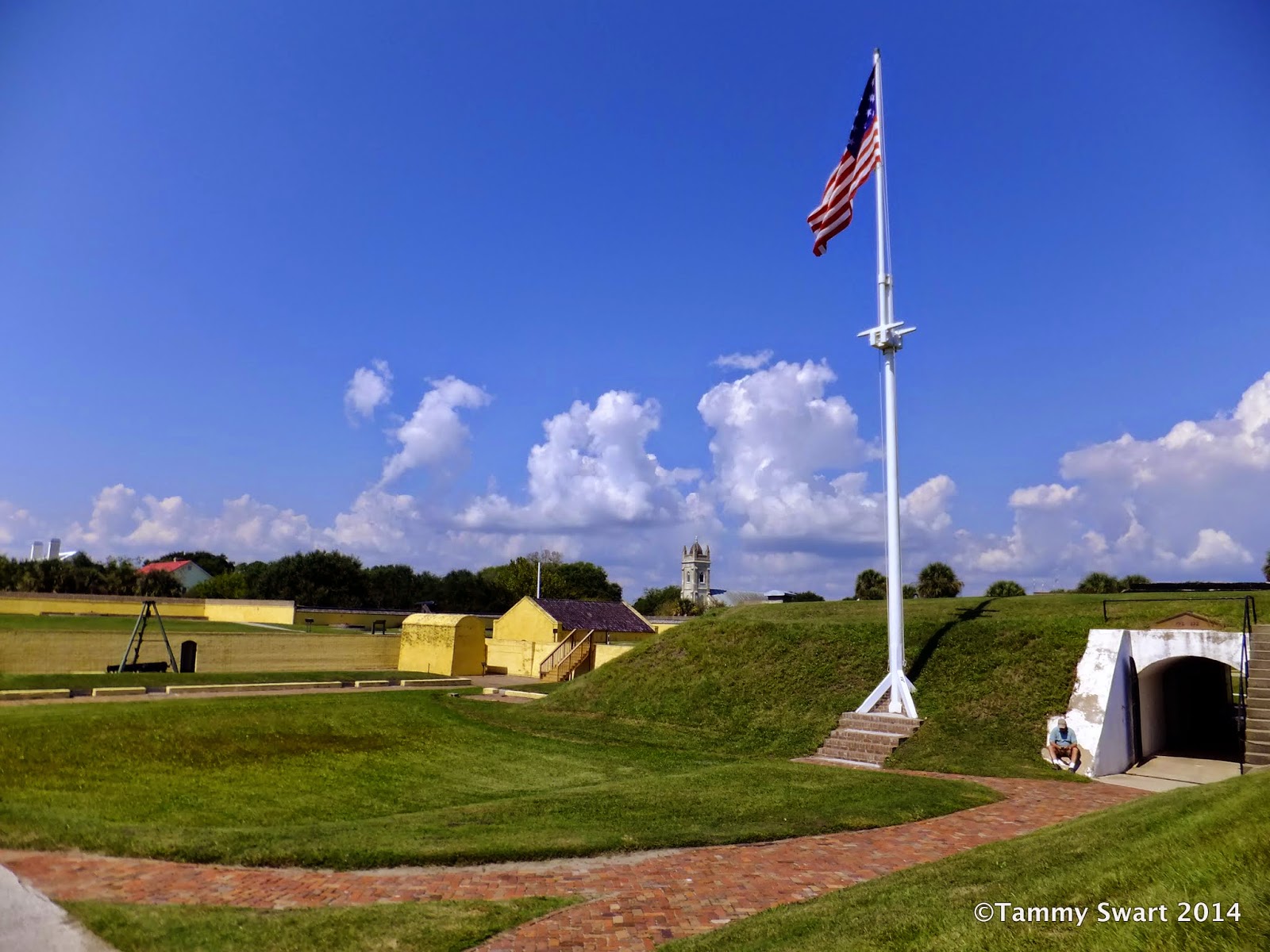 We continued on towards the part of the courtyard representative of the later years, where several old brick buildings still stand.  The American flag waves majestically over the now quiet hills of the fort. 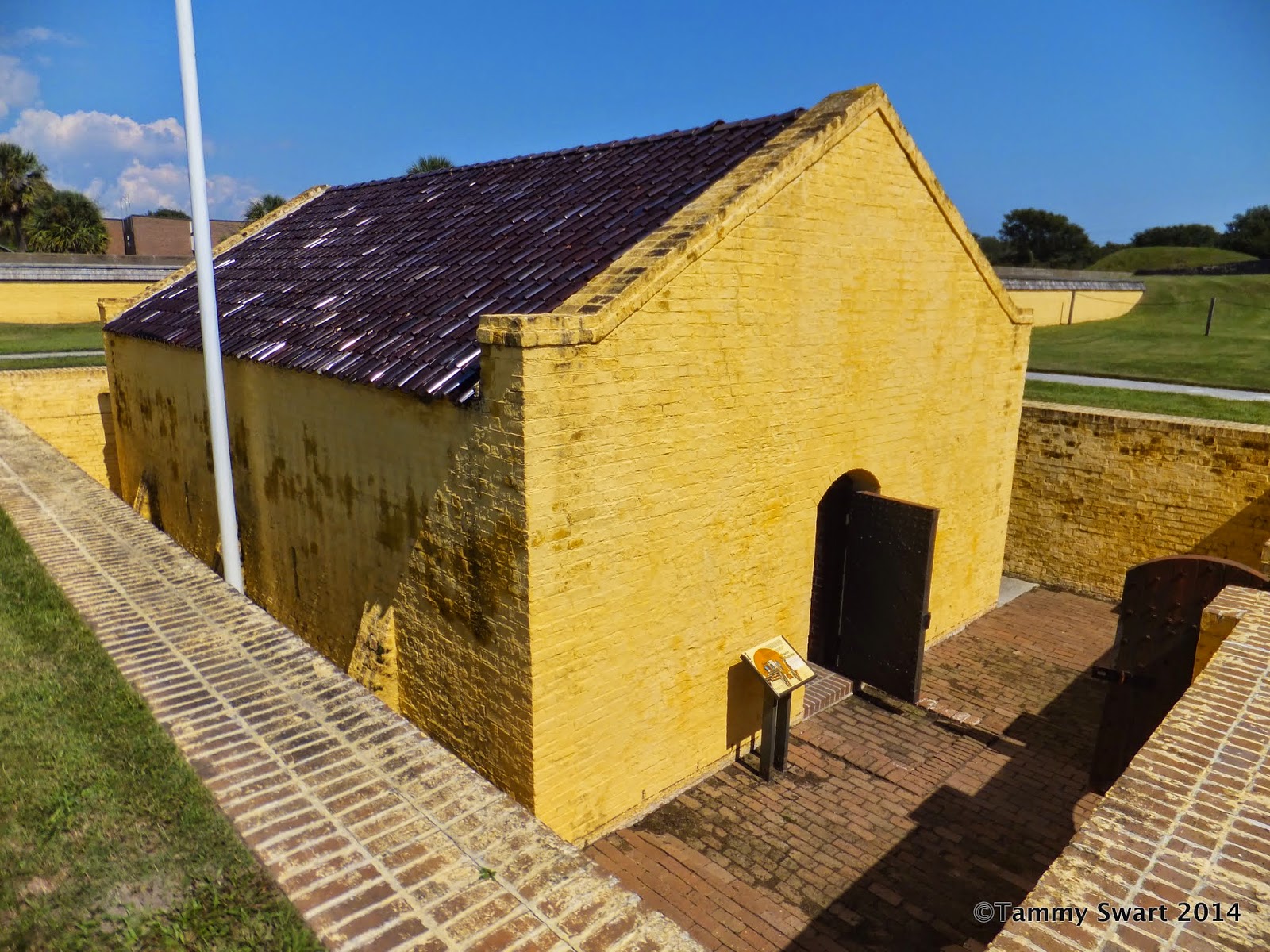 But the Stars & Stripes was not always the flag that stood sentry over these grounds.  One of Bruce's favorite stories about the fort was the one in which Sergeant William Jasper leapt over the wall to save the fort's flag after the pole was split in two by cannon fire.  He recovered the flag and used a cannon sponge as a makeshift pole to reinstate the flag and the battle went on.

This Flag, with the blue background signifying the soldier's uniforms, and the crescent, which was worn on the caps of the regiments stationed there, was later designated as South Carolina's State Flag.  The Palmetto tree, signifying the material of which the walls of Fort Moultrie were originally made, was added to the flag much later and completes the flag as it still waves today. 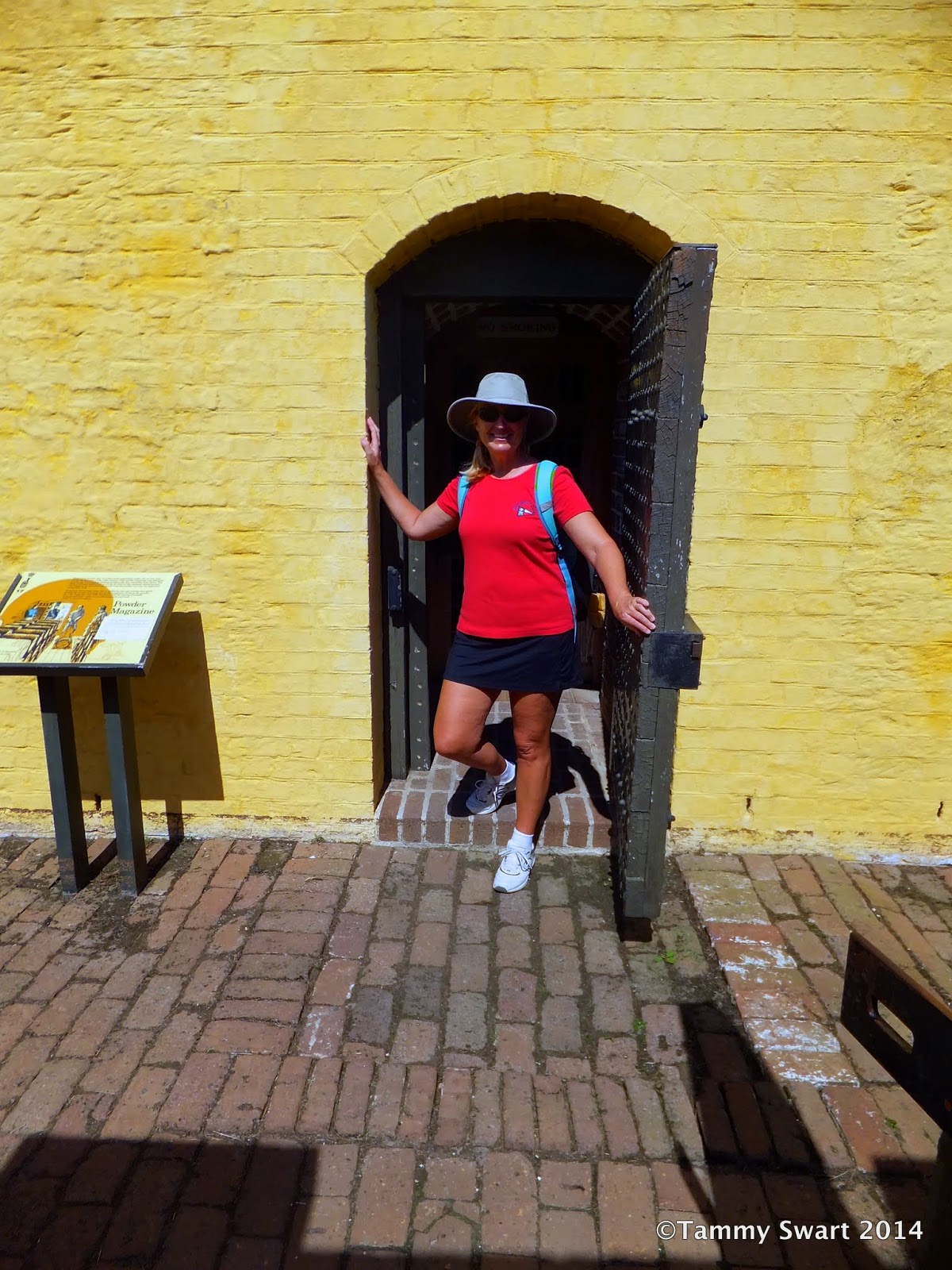 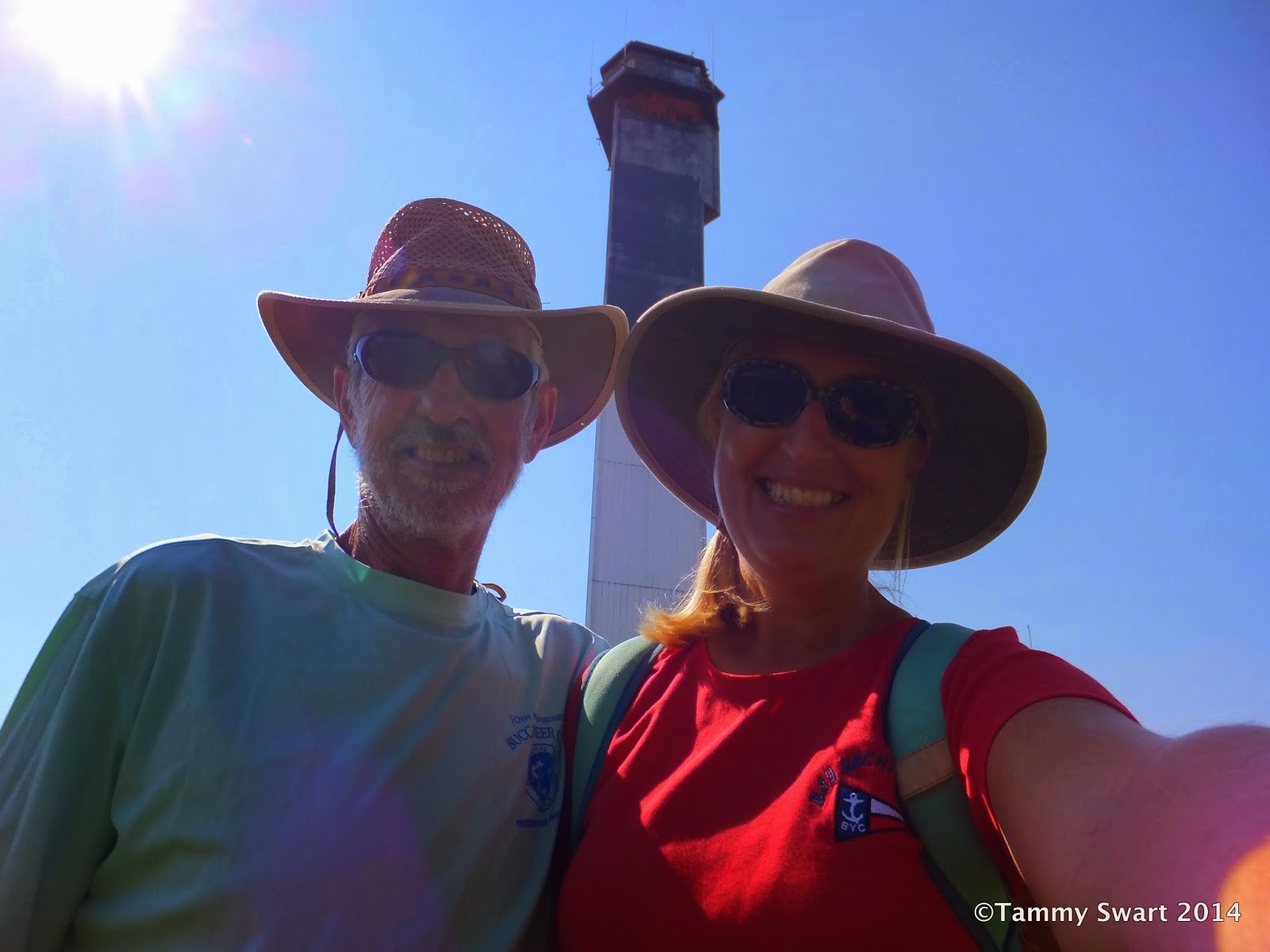 This, ladies and gentlemen... concludes your history lesson for today.  We move on to the refreshment portion of our day.  But before we go there, we took a brief side trip to one of the many beach access points on Sullivan Island.  The one we picked just happens (not coincidentally) to have a lighthouse as well... 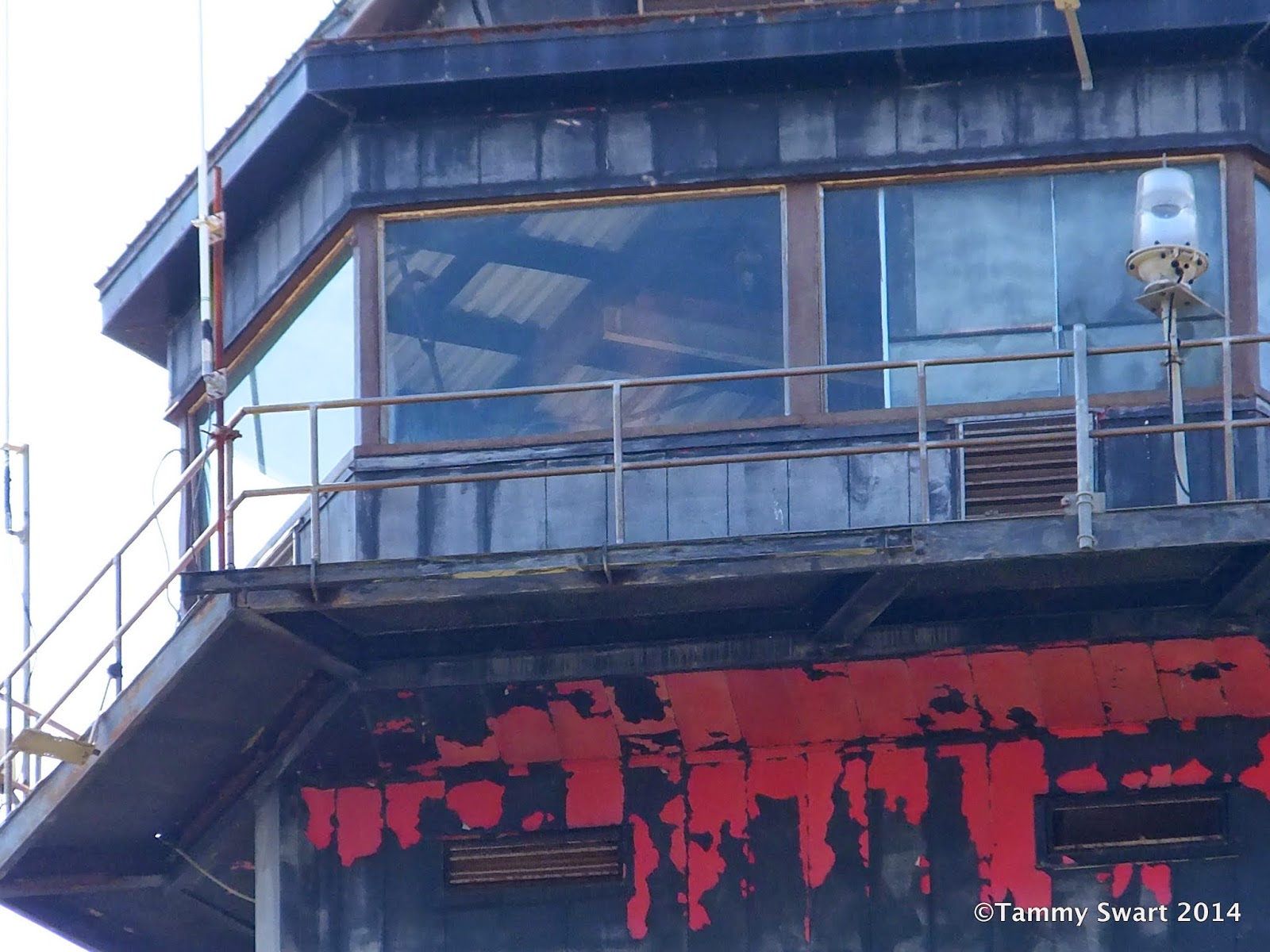 The Sullivan Island Lighthouse.  Sadly there are no tours as the structure is still in use by the USCG.

I was able to see that the light was slowly rotating, even in broad daylight. 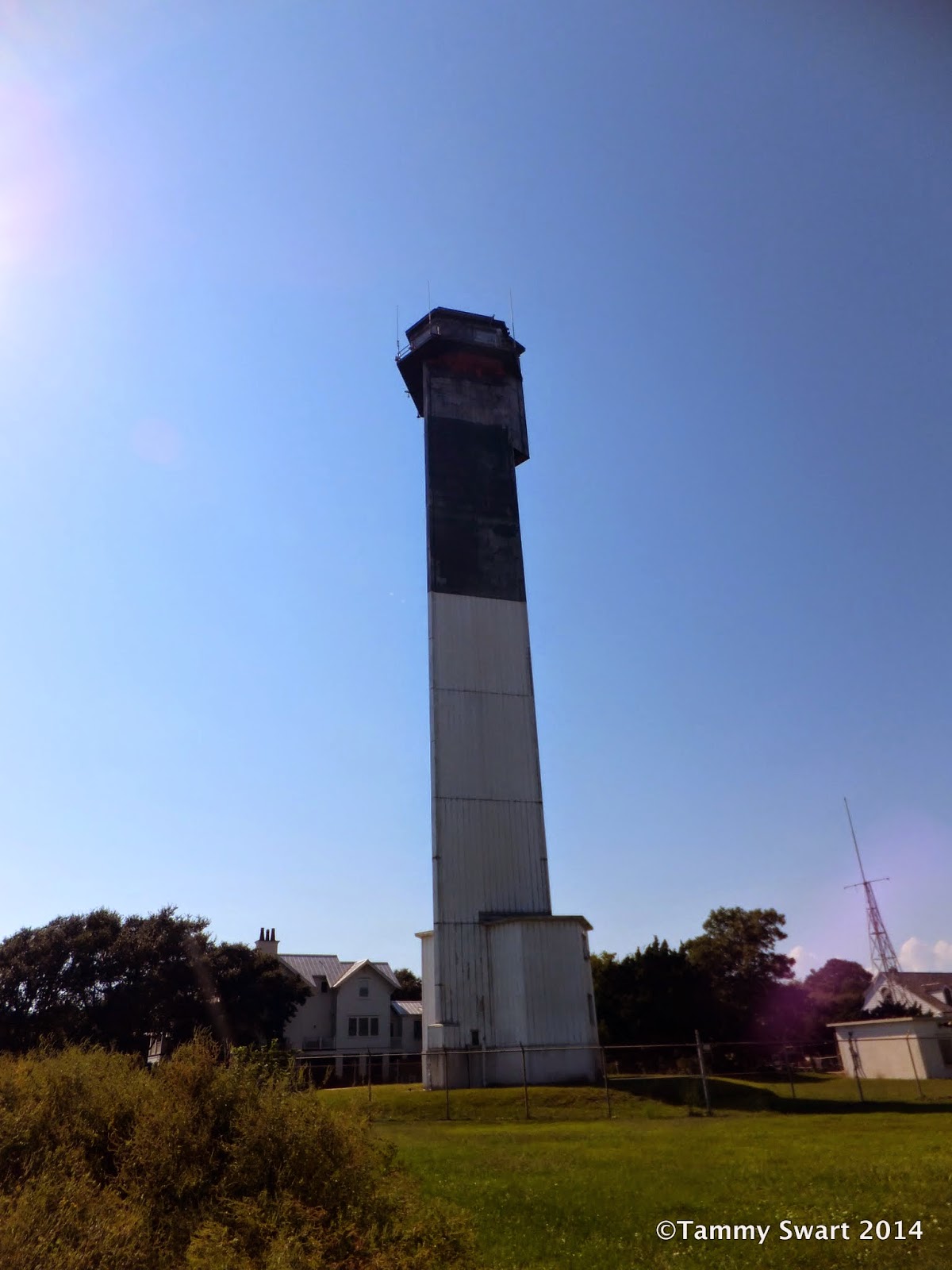 If this is not the ugliest lighthouse in America, I have yet to see one that would take the title away... 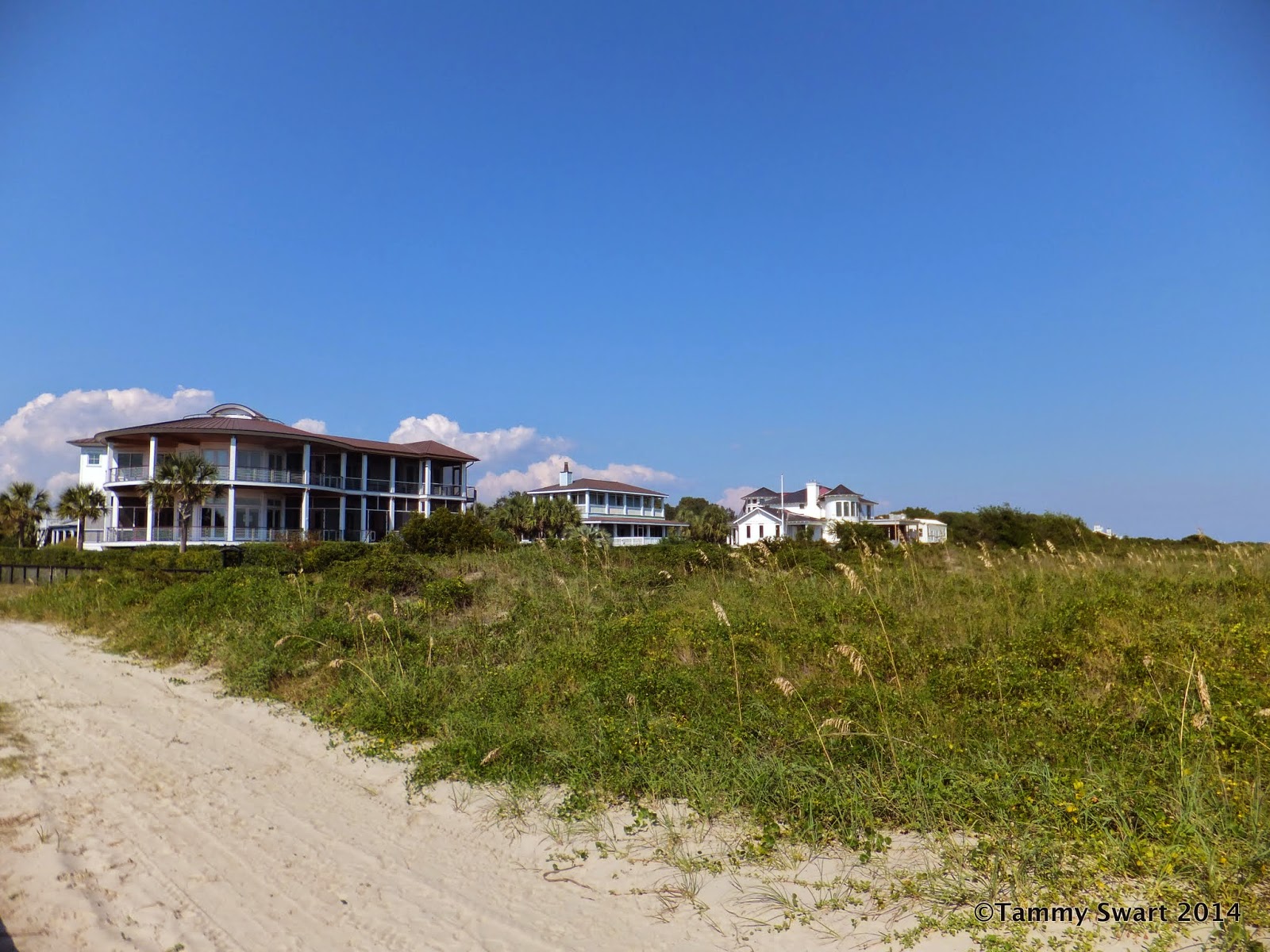 We strolled down the boardwalk to the beach past gorgeous waterfront homes nestled in the dunes. 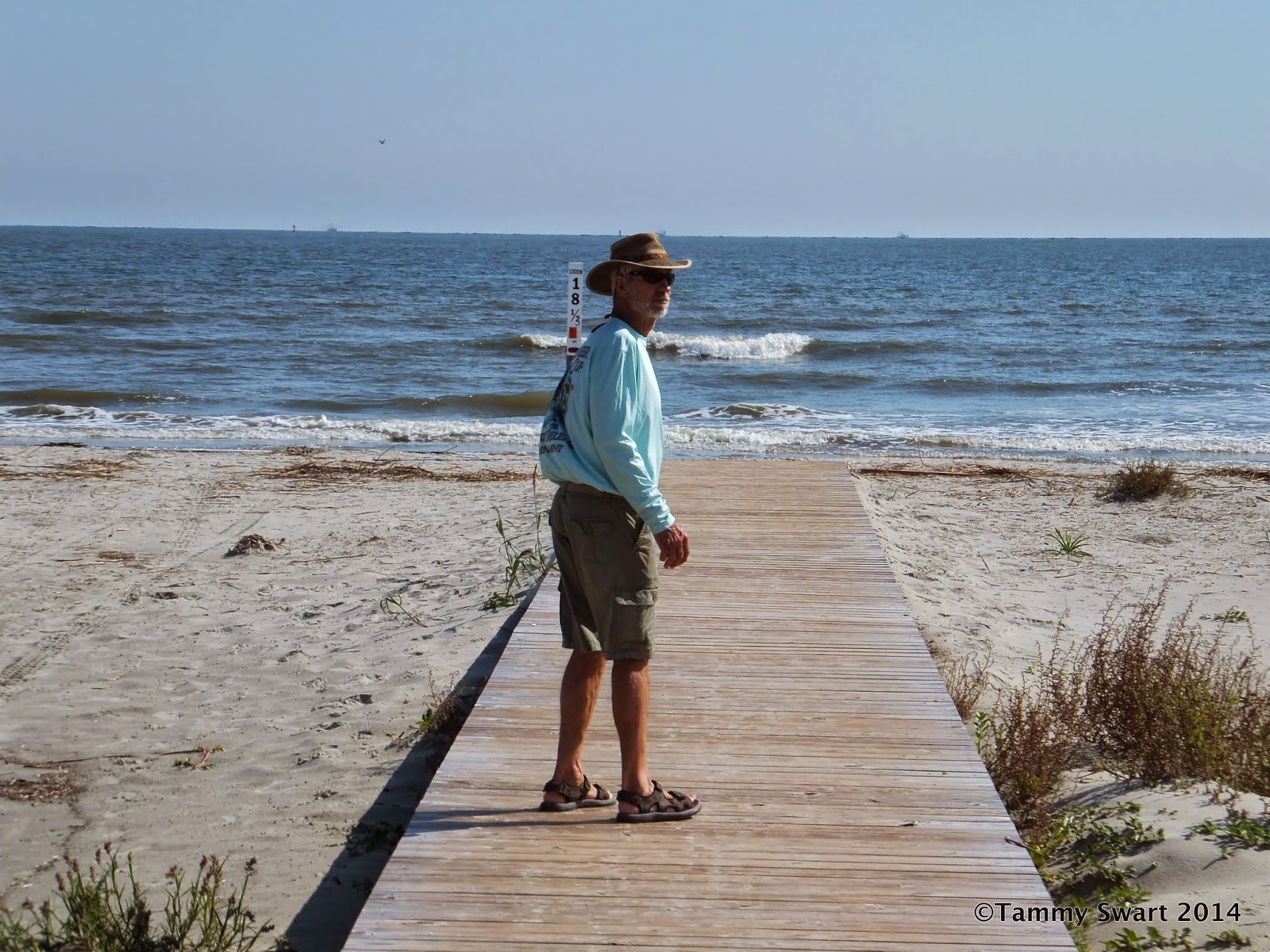 Of all of the many beaches we've visited in our year of cruising, this beach is the one that is most like ours back home.  The color of the sand, the dunes with waving sea oats, the murky waves in the water... just like home. 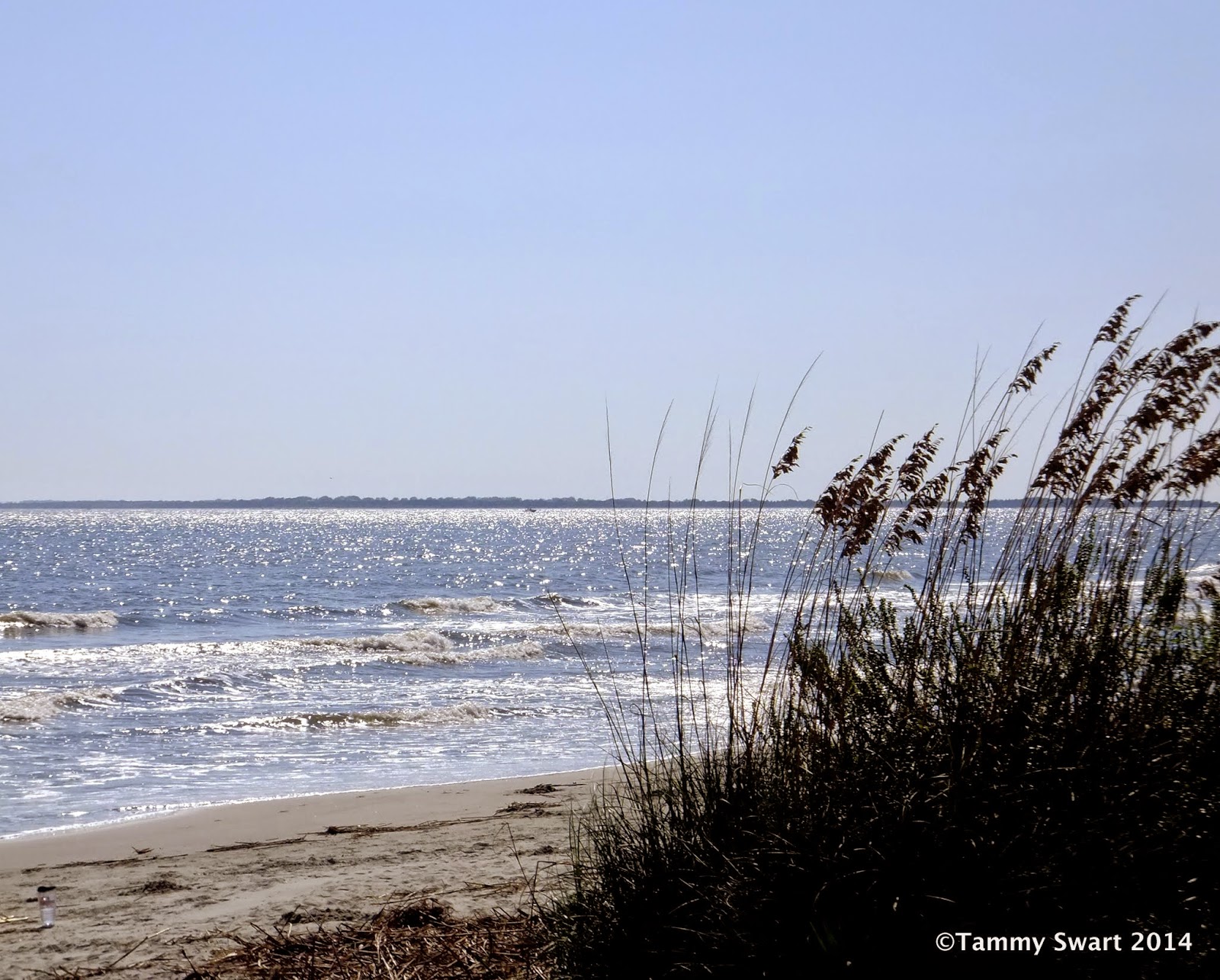 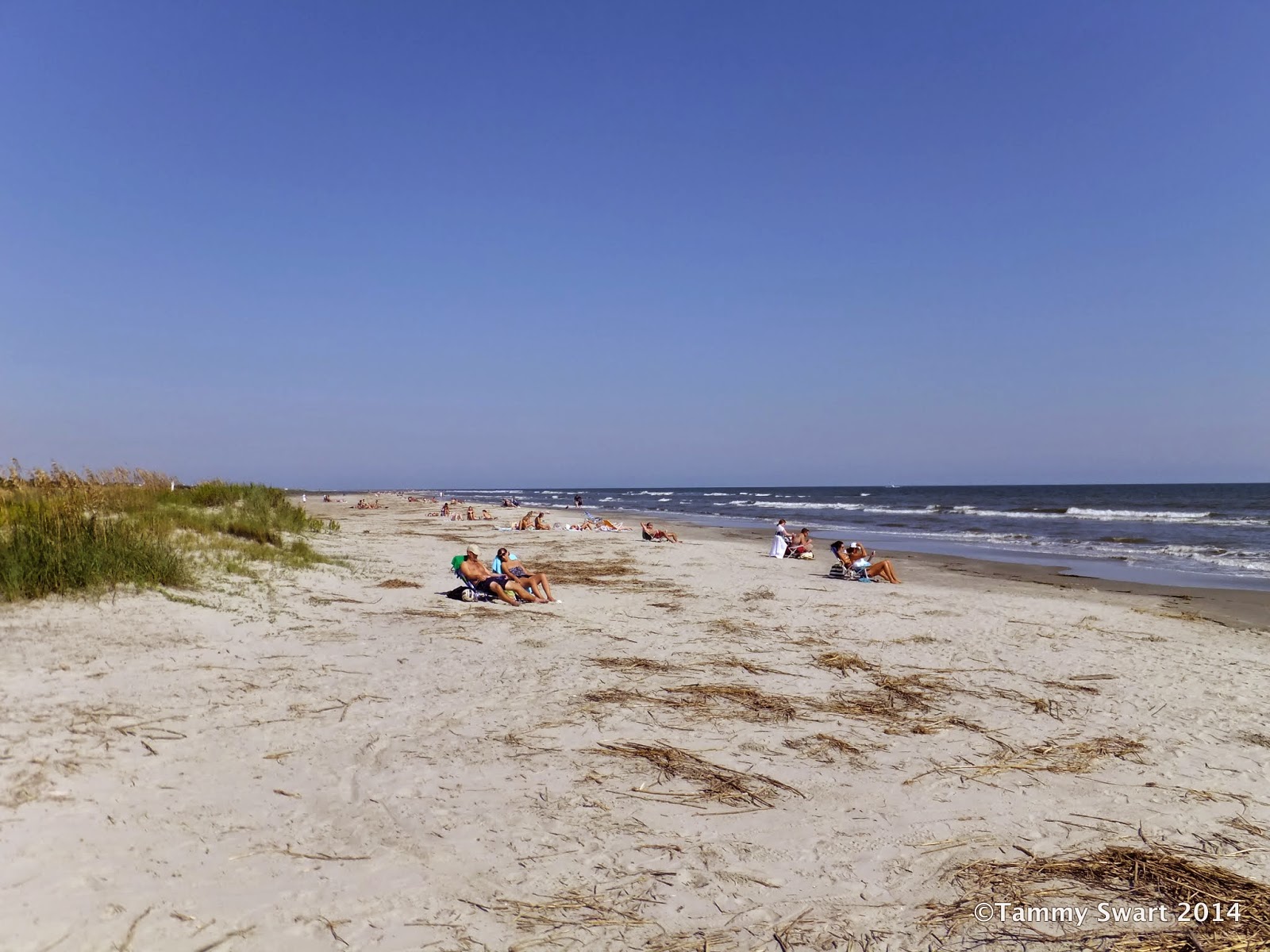 Every place we've been has its "draw".  It's focal point.  It's main attraction.  Sullivan Island has two.  The first being, of course, Fort Moultrie.  Well, Poe's Tavern is the second. 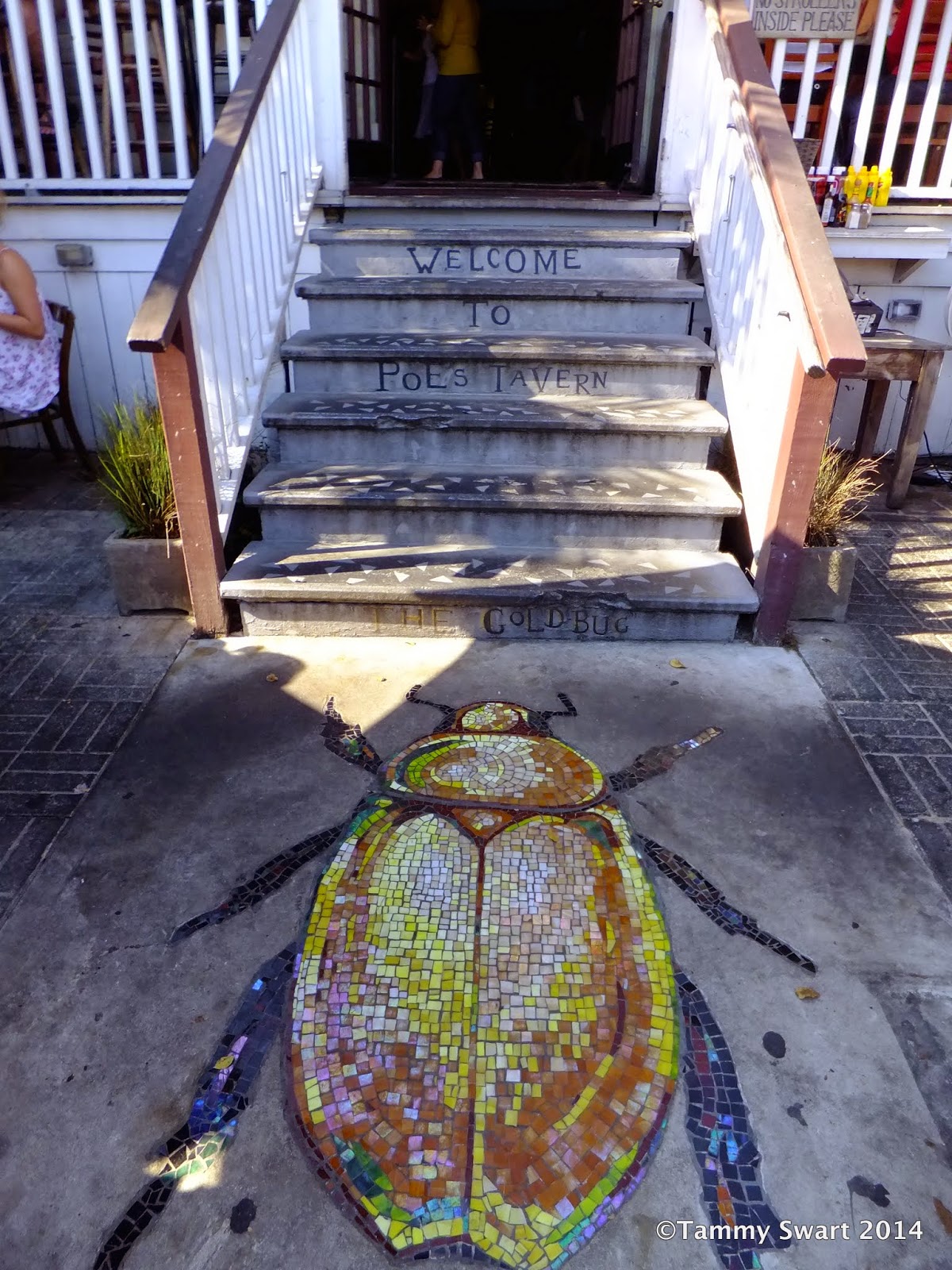 We followed the "Gold Bug" into the dark, welcoming interior to find seats in a back corner amidst an impressive collection of items all centered around the famous literary marvel, Edgar Allen Poe. 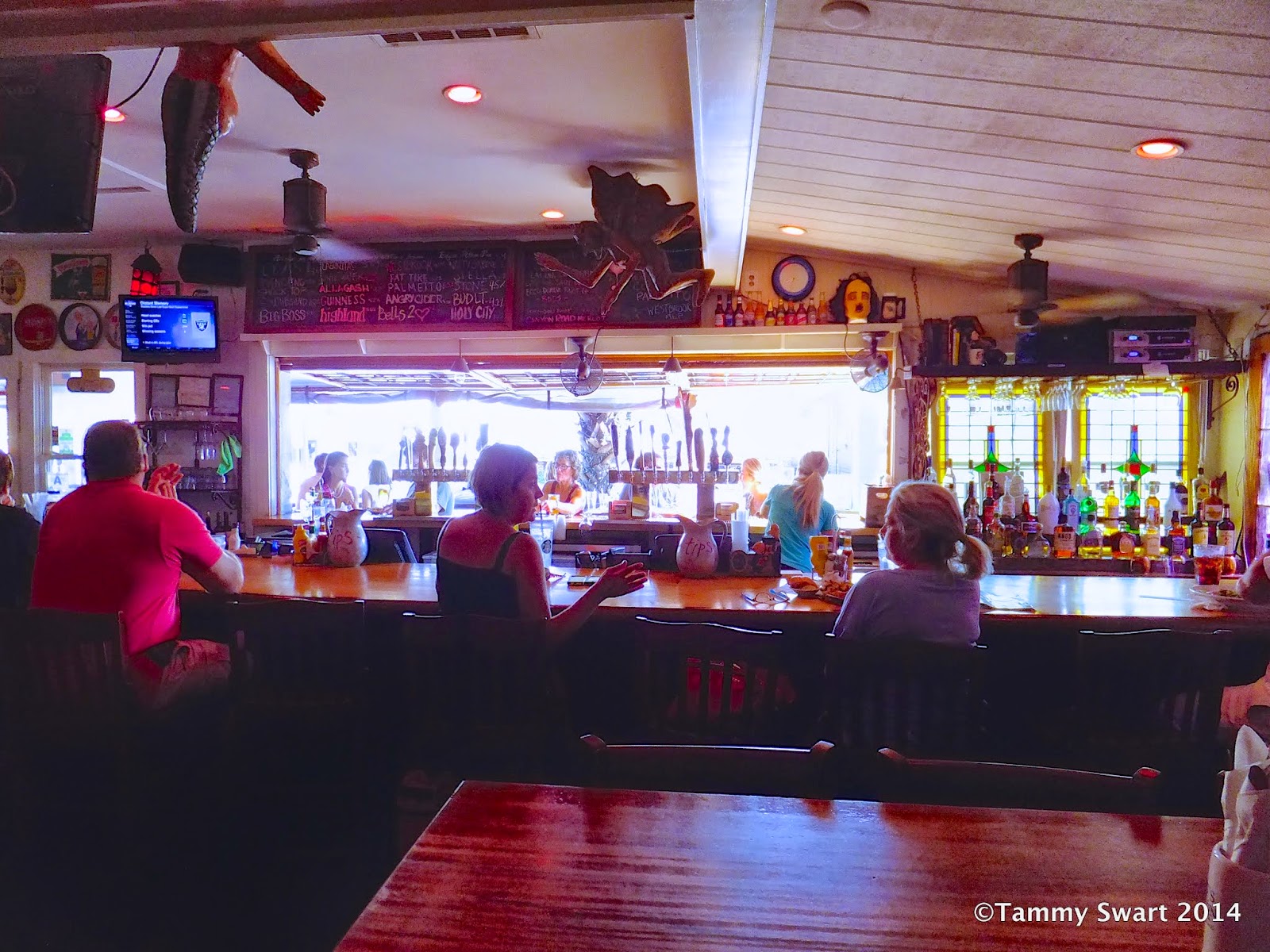 Poe was stationed at Fort Moultrie for 13 months under the pseudonym Edgar Allen Perry.  His time at Sullivan's Island led him to write The Gold Bug, which is about a mystical beetle that led to buried treasure.  You can download the free ebook here. 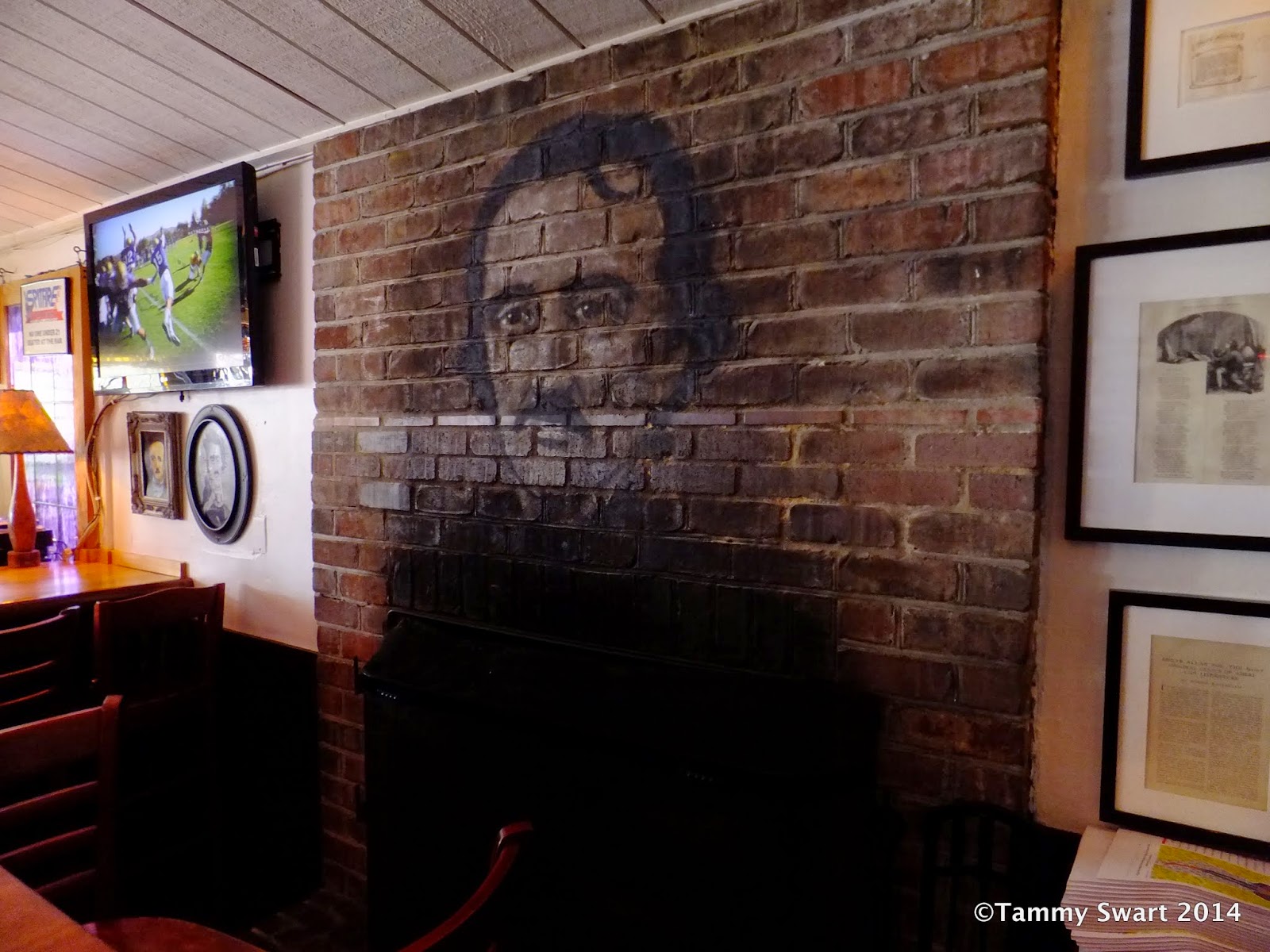 There is no talk of any ghostly activity, but if ever there were a candidate for it, E.A. Poe would be it.  The day had turned out to be delightfully warm and no fire was warranted in tavern... but with all things creepy about Poe swirling in my head, I'll admit that I felt a certain chill in the air... 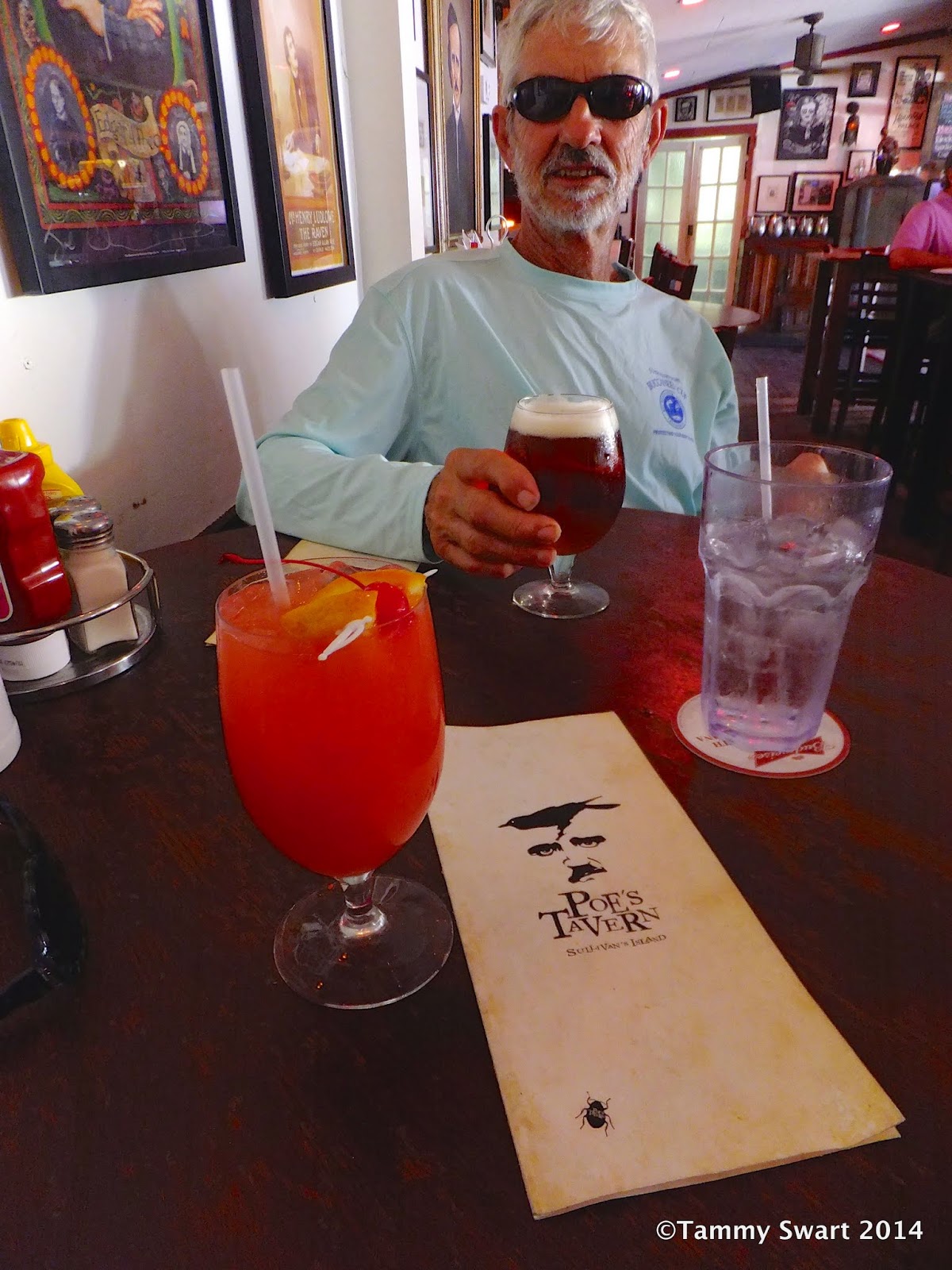 But then, maybe that was just the rum punch talking...