Another Day... Another Fort

I've gotta admit it.  History is not my thing.  Dates and names escape me but I do like a story...  Bruce however LOVES it!  Being a retired History Teacher, he can spend HOURS soaking up every detail.  For him, it's kind of a fact-checking game.  For me... Give me the significant highlights and let me roam around, take some pictures and soak up the "feel" of the place.

Charleston has no shortage of historical fortification sites.  Not all of them are open to visitors, Pinckney Castle, for example, can only be seen from afar by taking one of the many harbor tours by boat.


We boarded our tour boat early in the day.  Bruce compared notes with another History Buff seated next to us while his wife and I commiserated silently...  The Harbor was smooth for the half hour trip to the Island where Fort Sumpter lies.  During our ride, we were entertained by a recap of the historical events that occurred here, not the least of which was the firing of the first shots of the Civil War on April 12, 1861.


You might remember that we recently visited another fort, Fort Moultrie on Sullivan Island.  We could look across Charleston Harbor and see Fort Sumpter.  Today, we reversed that and it was Moultrie that we could barely see across the waves.

Together, these two sites made Charleston, SC one of the most protected cities on the East Coast.

Unlike Fort Moultrie, Fort Sumpter has not been restored and provides a more "real" experience for the visitor.

Construction of the original fort was "completed" (forts are never really completed) in 1861.  Its walls rose to 50 ft above the high tide mark.  The fort today does not stand so tall, having been left in ruins at the end of the Civil War.

The walls were releveled by the Army after the Civil War and it was used as an unmanned lighthouse station from 1876 to 1897.

We followed our group into the fort through the only entrance in the pentagonal external wall.  The inner courtyard is surrounded by  reconstructed rooms built inside the walls to house the many cannons on display here. 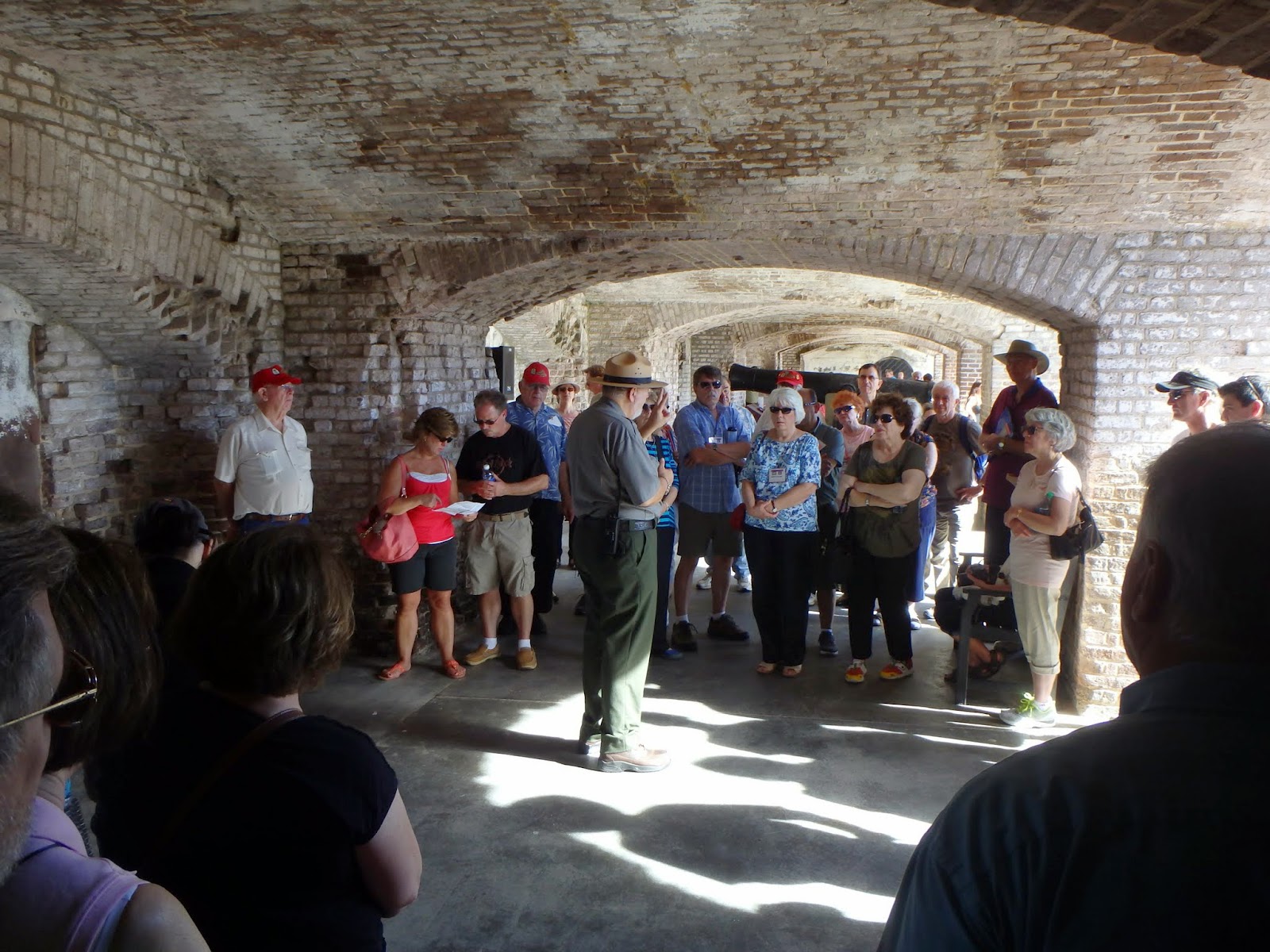 After listening to a brief history of the fort, we were then free to roam about on our own.

I'm fascinated by the fact that these walls have withstood the passing of time and have remained essentially unchanged for a hundred and fifty years.  The Fort was built upon a man-made island risen atop a sandbar in the middle of Charleston Harbor.  The bricks were made by hand, right here. 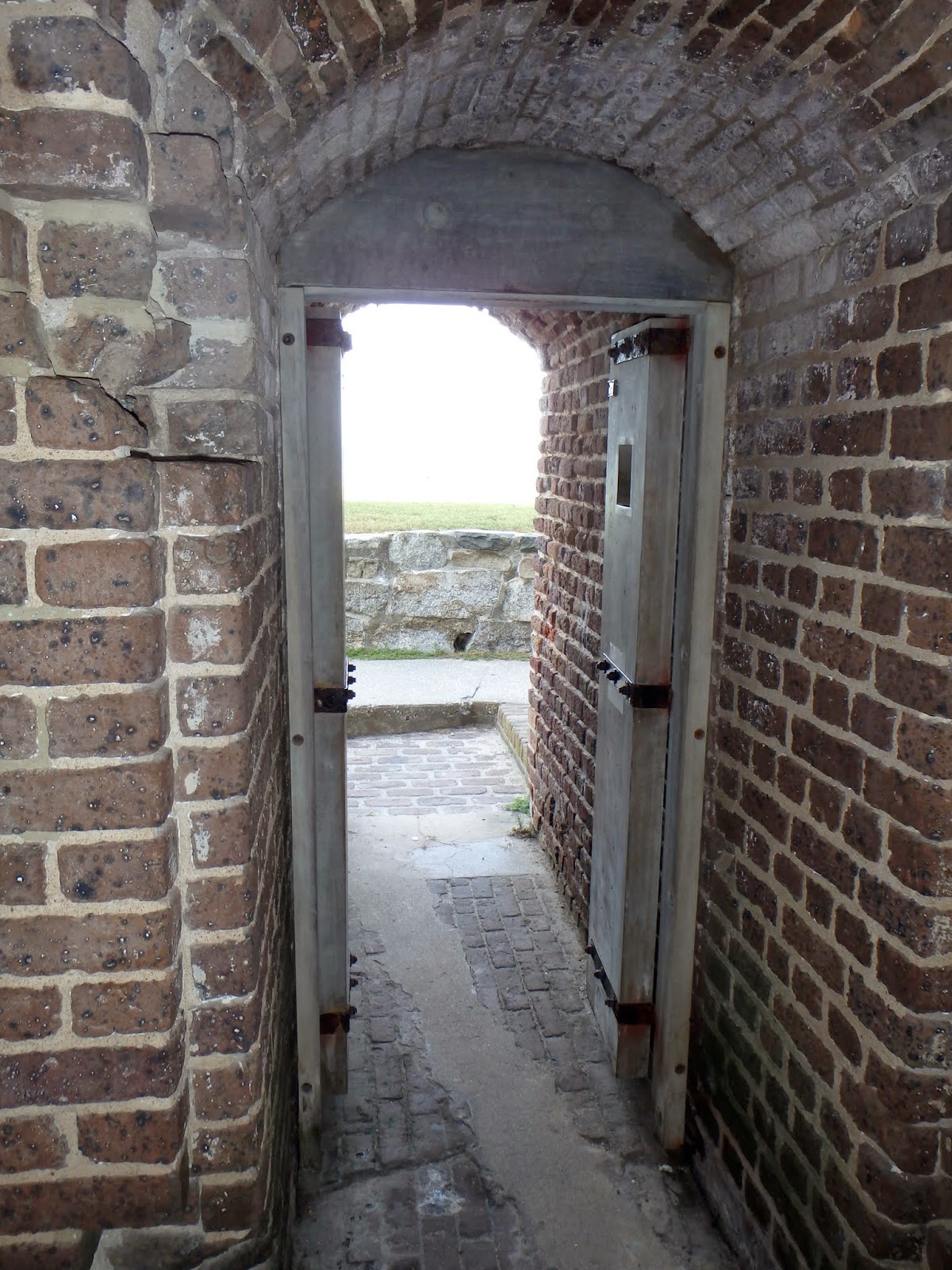 I try to imagine what it must have been like to be stationed here on this lonely outpost.  Day in, day out, making the bricks and constructing these walls that measure between five and seven feet in thickness, to form the outer perimeter. 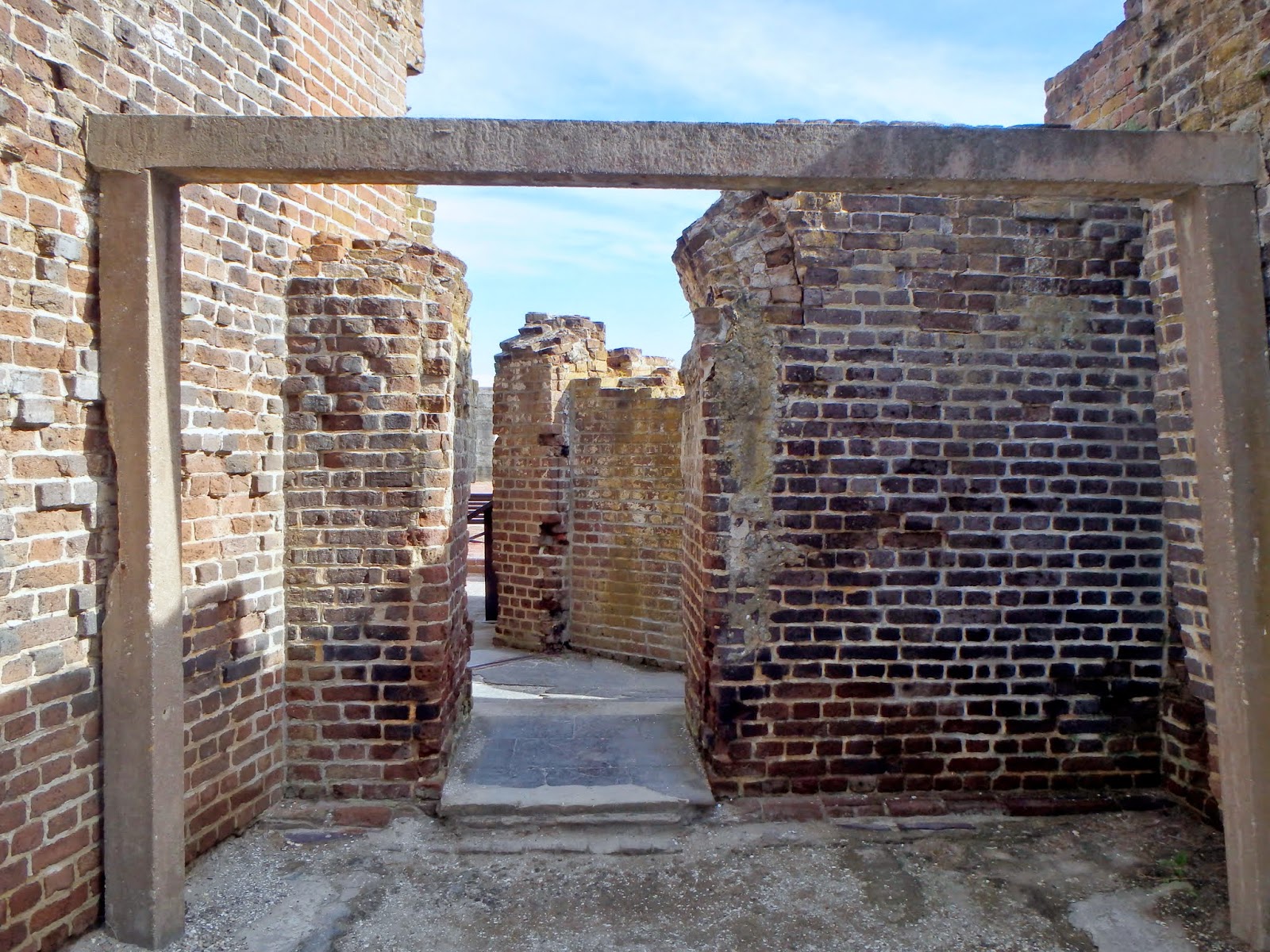 There are crumbling ruins of the rooms where the soldiers were once housed.  Parlors where they spent their hours, days, weeks, months... Six hundred and fifty of them lived here for months on end. 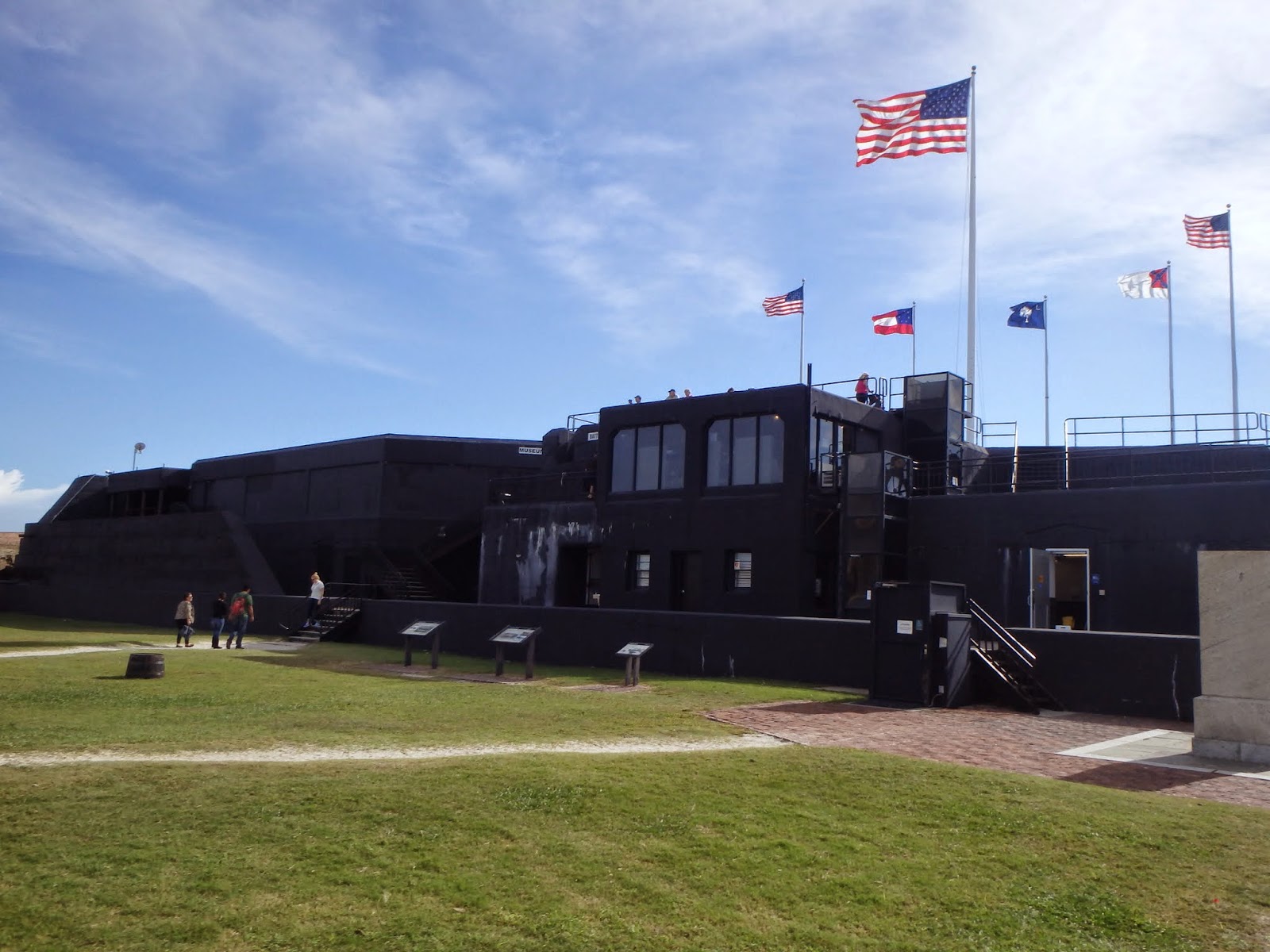 The Battery lies along the third wall and faces the entrance to Charleston Harbor.

We climbed up to the top to enjoy the view that the inhabitants of this Fort once took for granted.

From the top, you can see all around the Harbor.  The cannons could fire up to four miles and thus discouraged enemy advancement into the Harbor.

Unfortunately, the fort fell after its first battle which lasted only 34 hours.  The soldiers fired their first shot, not from the top of the Battery, but from a lower tier in order to limit exposure for the soldiers.  The shot missed...

Two deaths were recorded but not from the battle.

They occurred during the 100 gun salute after the fight, during which a misfire killed two soldiers. 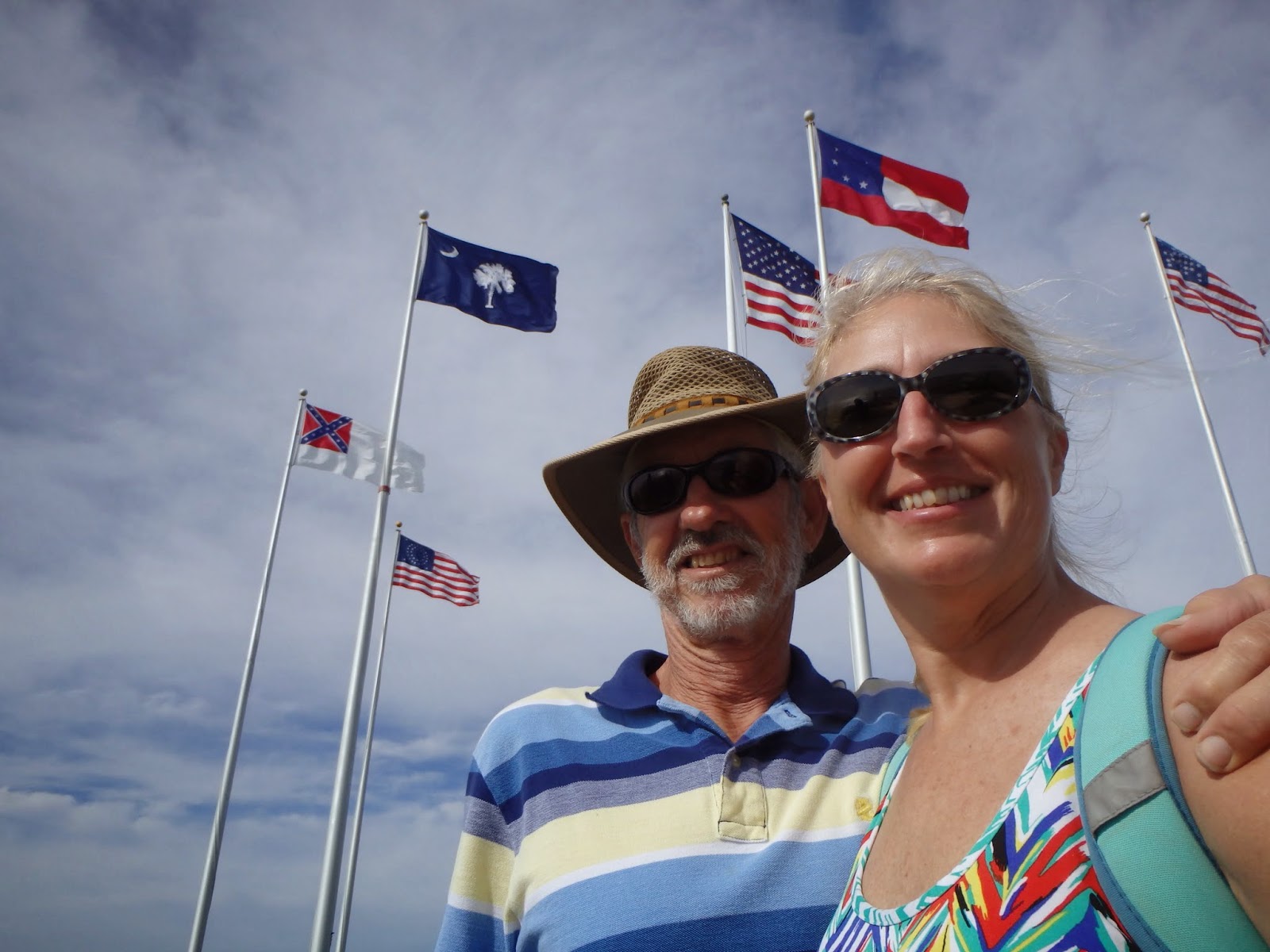 It isn't so much the fighting history of this place that intrigues me, but the daily living of the people who spent time here.

It is difficult to believe that these walls once housed six hundred and fifty people.  Where did their water come from?  They had no well and they did not bring it from the mainland.  There were cisterns that caught rainwater.  And that's all they had. 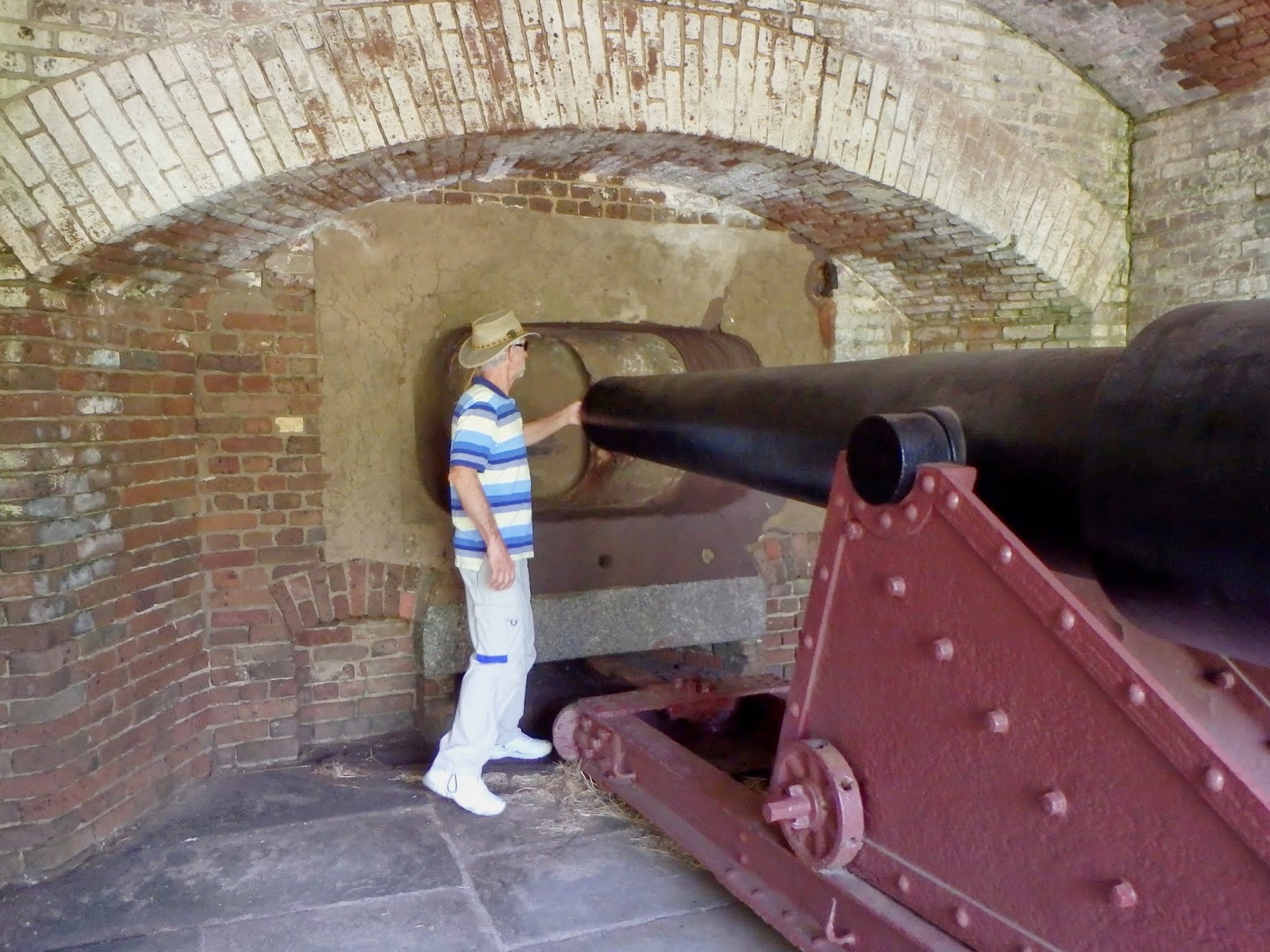 We continued on exploring the crumbling rooms and examining the cannons. 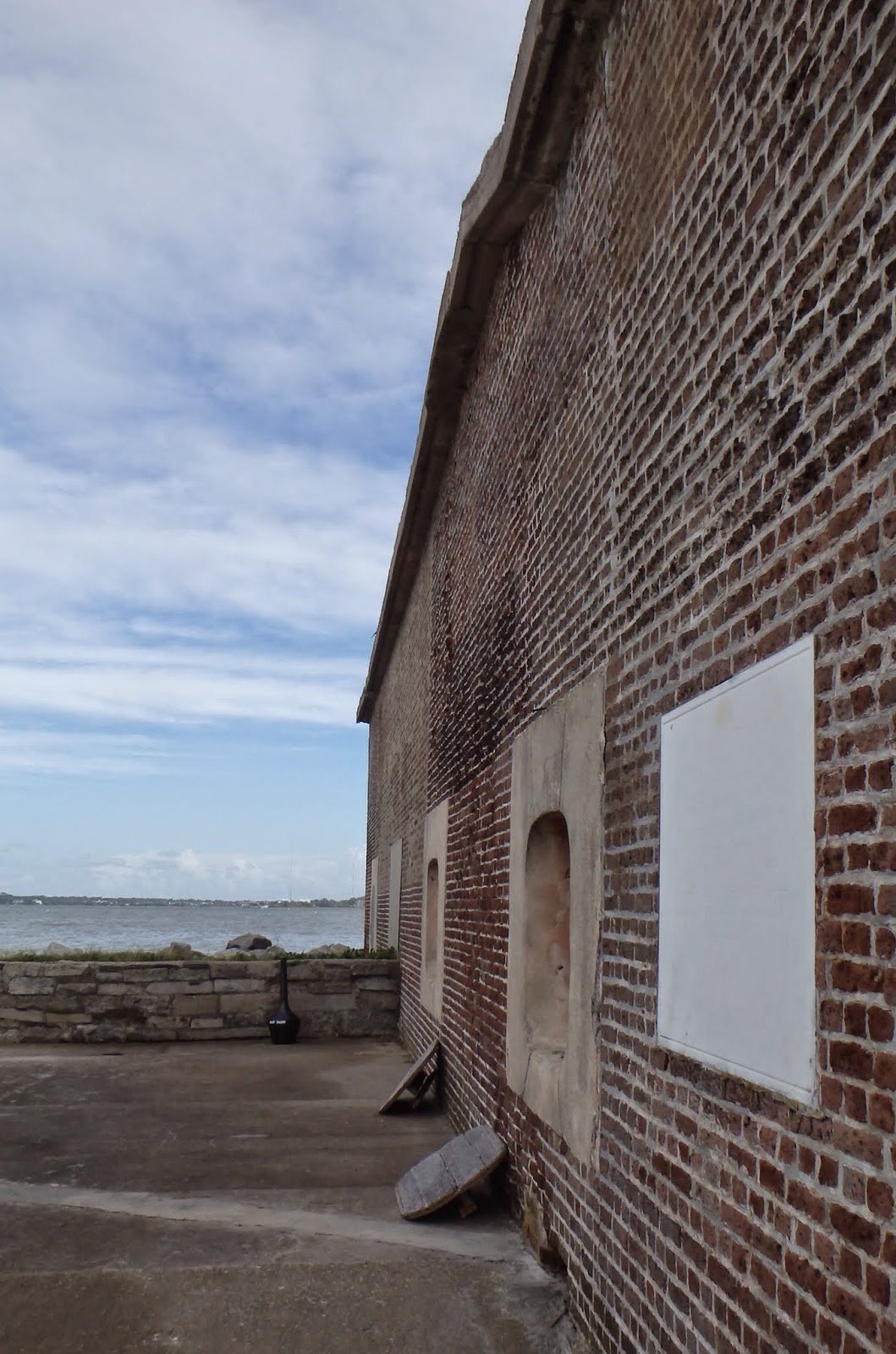 Soon our time here was at an end.  The boat would be leaving soon and we exited the fort to make way back to the boat.  We wanted to get seats on the upper level for our return trip so that we could see everything we may have missed on the trip to the Fort. 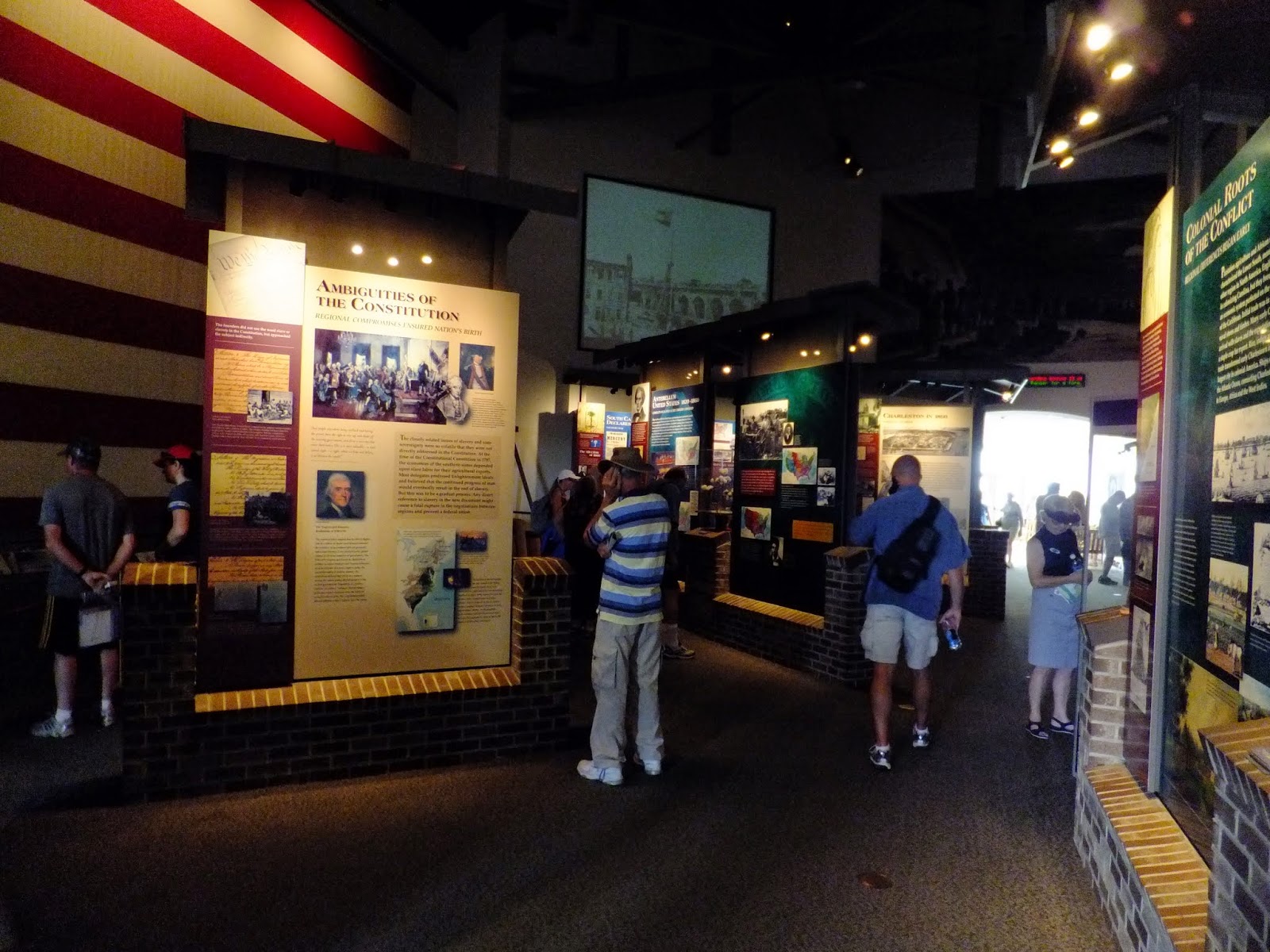 Before leaving, we re-entered the museum so that Bruce could get a better look at the displays there.

Bruce devoured the information provided here while I browsed looking at the real things displayed.  There are implements used in the daily lives of the soldiers that fascinate me.

Tucked along the wall beneath the flag on the left hand wall in this picture, was a long box. 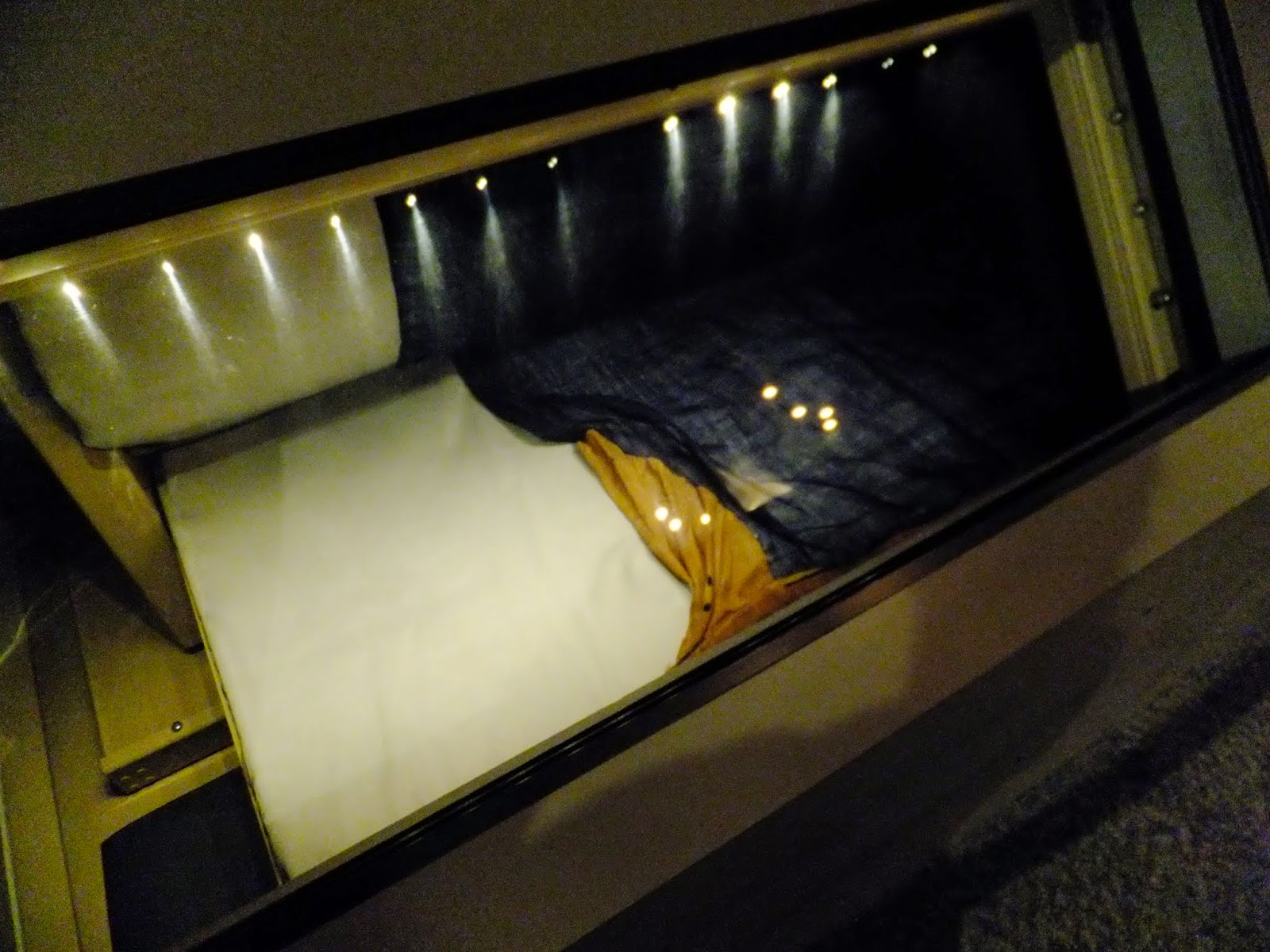 One end of the box was open displaying a scrap of thin blue material.  Now THIS interests me...  Inside this protective box lies the Fort Sumpter Flag.

It is protected in this climate controlled display case which rotates the section being viewed so that one part isn't more exposed than others.

This is THE flag that flew above Fort Sumpter when it was surrendered on April 14, 1861.  After the flag traveled around the country for four years, it was raised again in triumph over the remains of Fort Sumpter.  And here it remains...