A Date With A Ghost

What does the average person think of when they plan a Date Night?  Getting dressed up, maybe a little bling.  Dinner at an expensive restaurant, then go to the theatre or a catch a movie... followed up by a little bar hopping?


What does the average CRUISER think of when they plan a Date Night?  Finding something in their "closet" that is presentable and not caring that it's Fall and all the clothes they have to choose from have a decidedly "tropical" theme.  Finding a restaurant that's cheap in a tourist town can be a challenge... and for entertainment?  Why not cruise through a cemetery and then tag along for a Ghost Tour?  Perfect!

We started off with an early dinner in Historical Charleston, SC.  Our first choice, Joe Pasta, was closed for some sort of repairs, so we wandered across the street to Juanita Greenberg's.  We should have known that the chance of getting a "real" Mexican dinner in South Carolina was a stretch... But our server was sweet and we didn't leave hungry... just a bit confused. 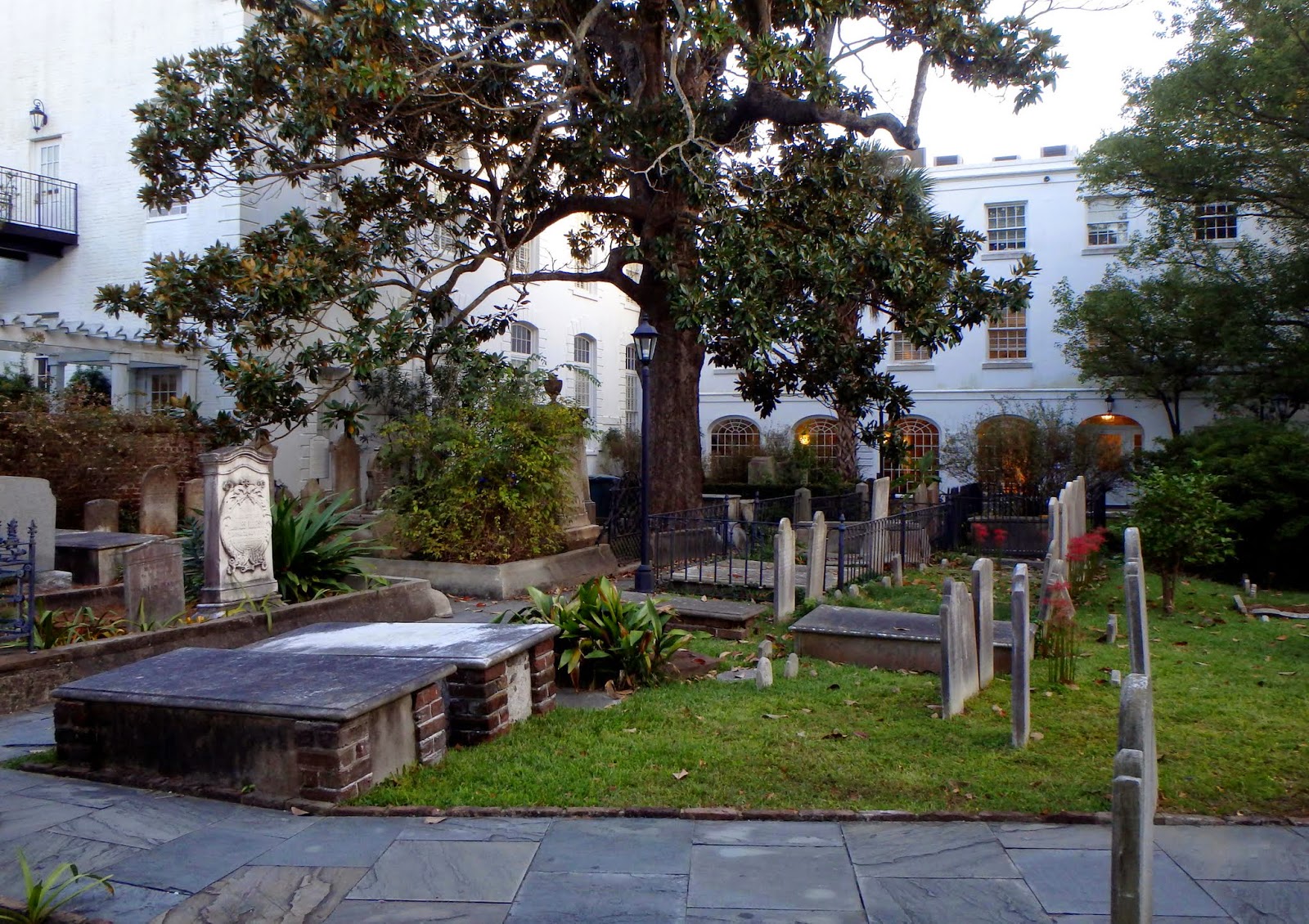 Still over an hour until the start of our Ghost Tour, we were delighted to "get in the mood" with a stroll through a cemetery.  We found St. Michael's Churchyard between us and the meeting place for our tour.  Charlestonians don't like the term "cemetery".  The prefer the more gentle Churchyard or Church Garden... 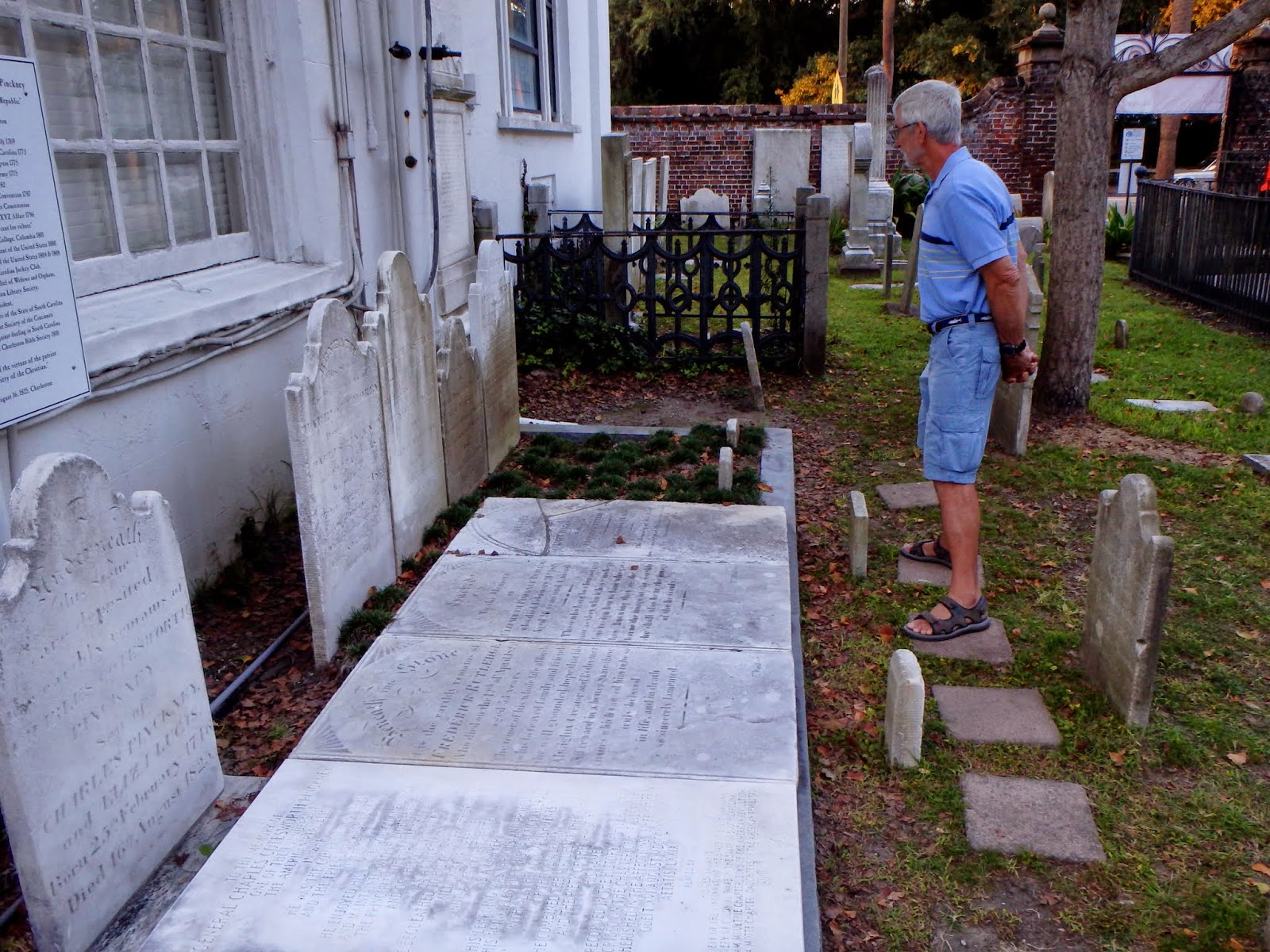 The time disappeared as we lost ourselves in the beauty and history of just one of many Churchyards in and around the Charleston area.

The historical aspect attracts Bruce.  He reads all of the posted information about the historical figures buried here... 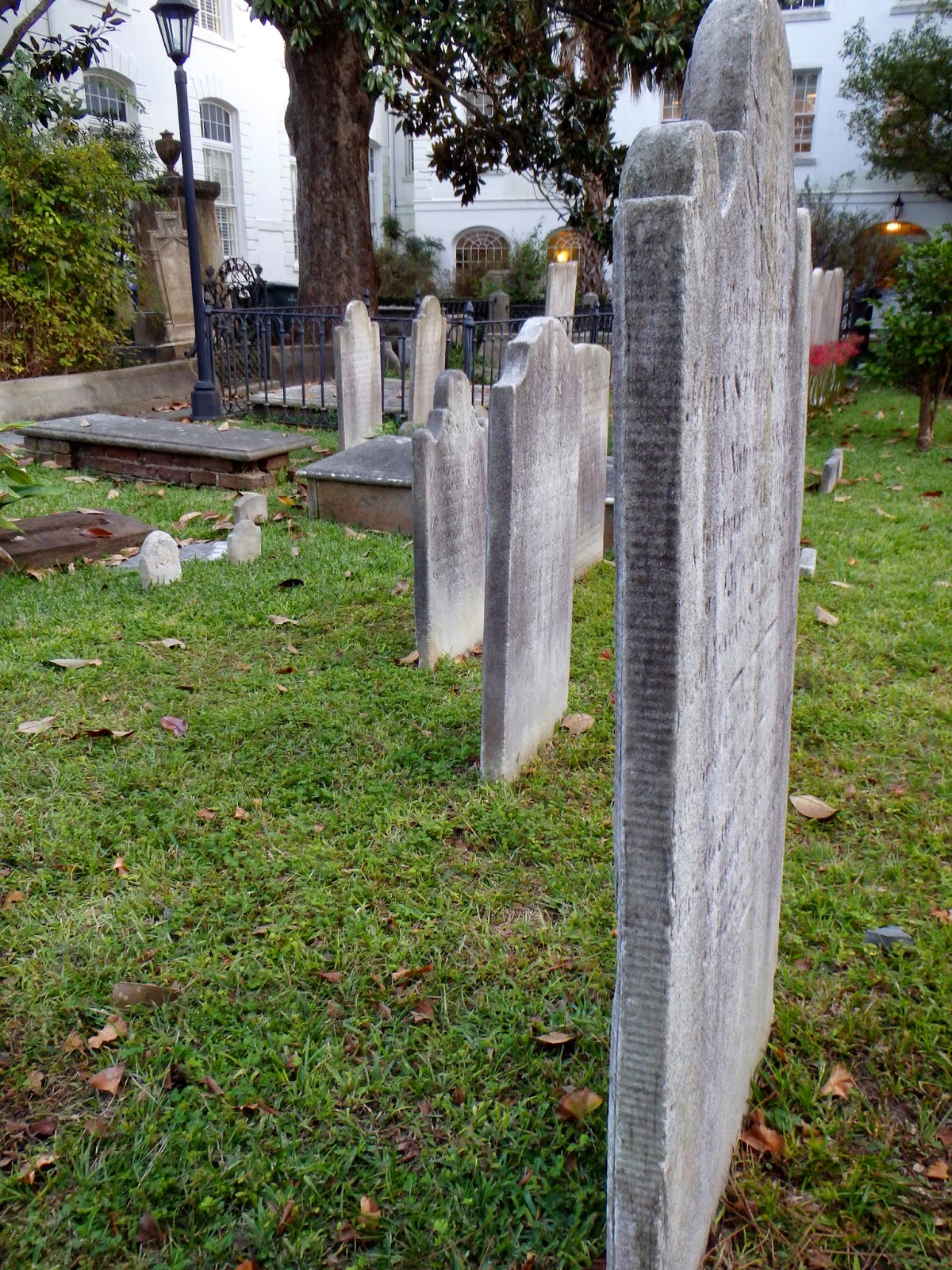 For me, it's more of an intangible thing... I love the feeling of being in and around these headstones and tombs.  I think about the decades that have passed leaving their mark upon these worn stones.

I think about how the people must have lived and how strange is is that we can now walk amongst them in a way...  And I wonder if any of them are watching... 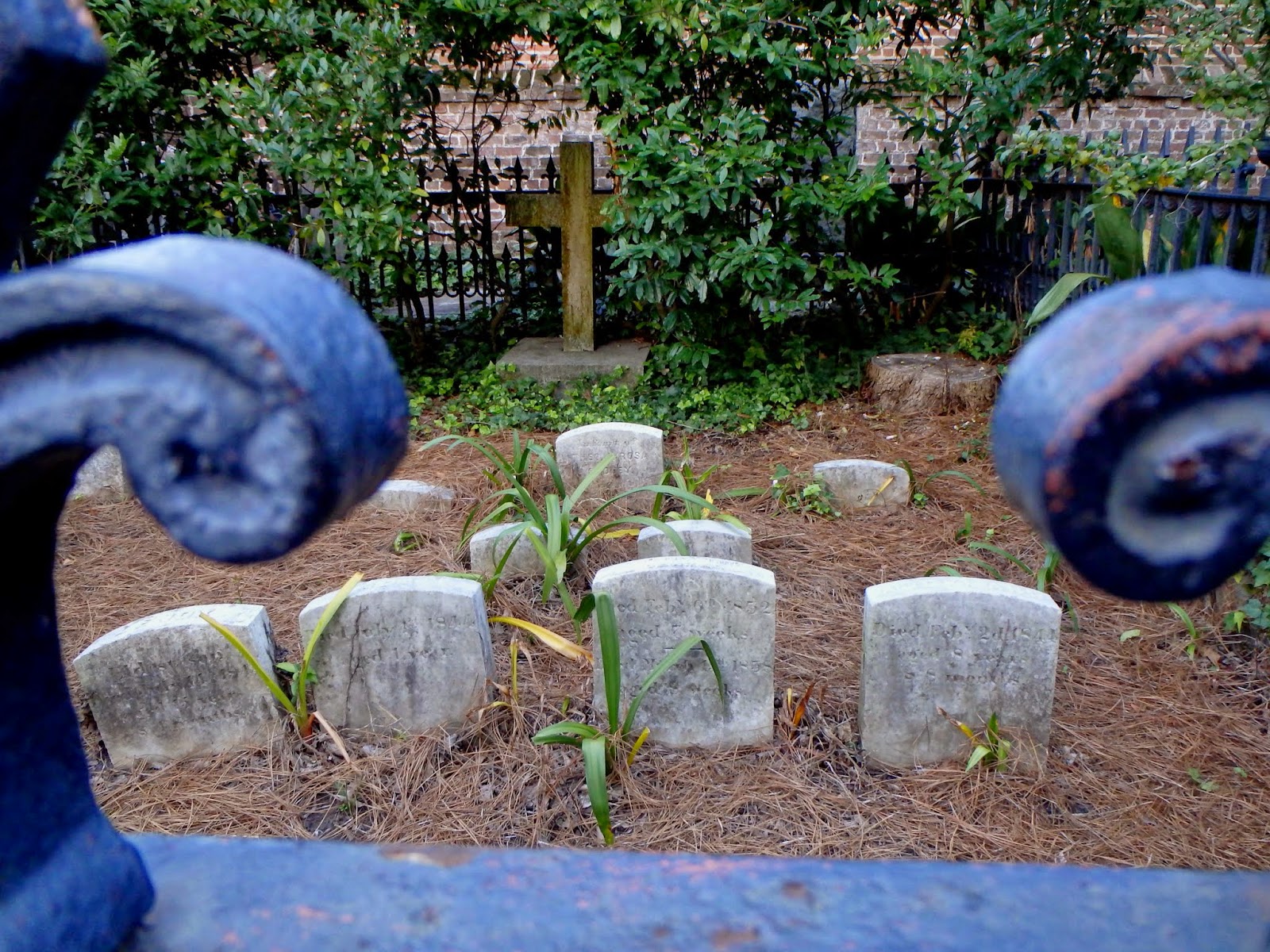 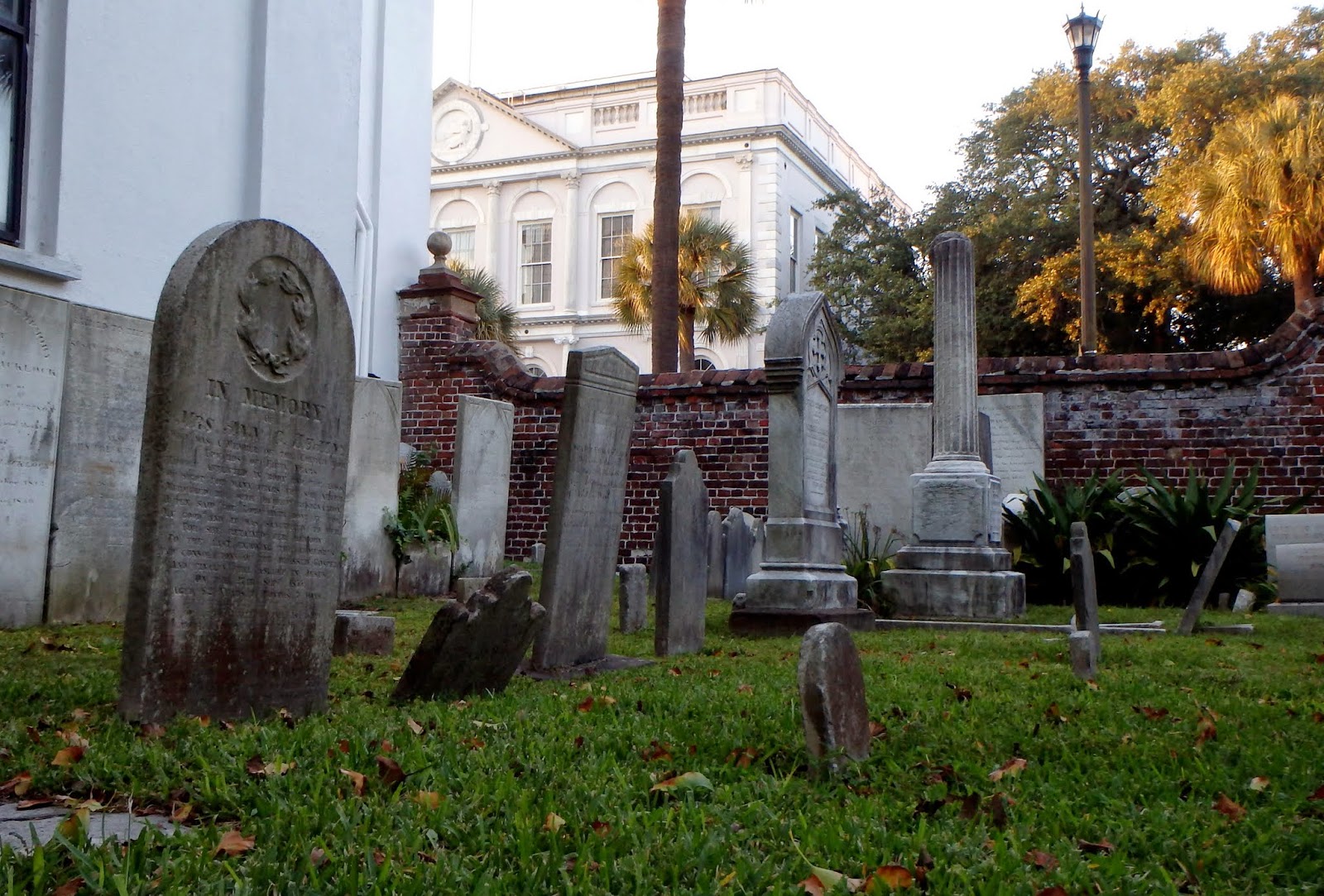 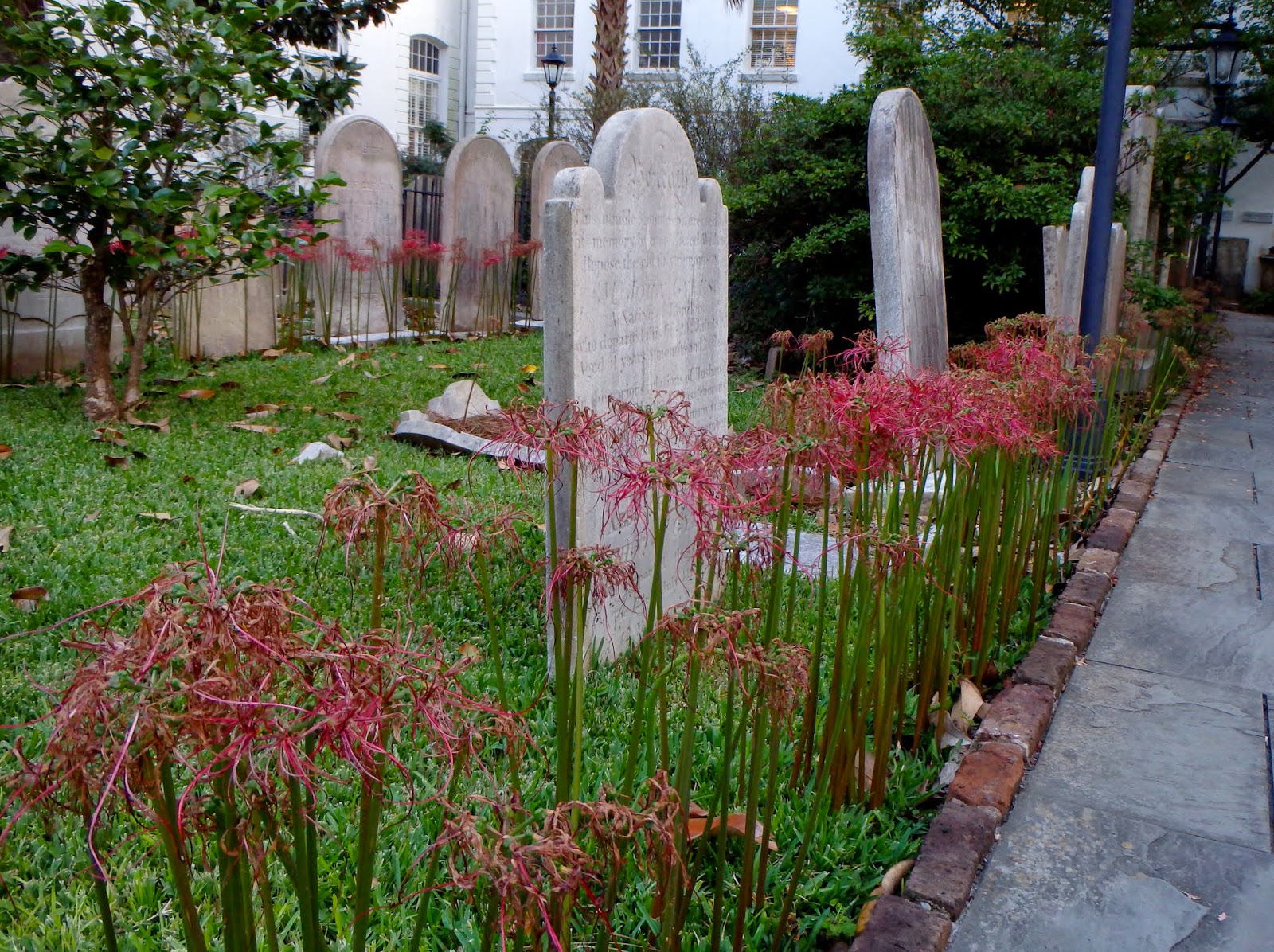 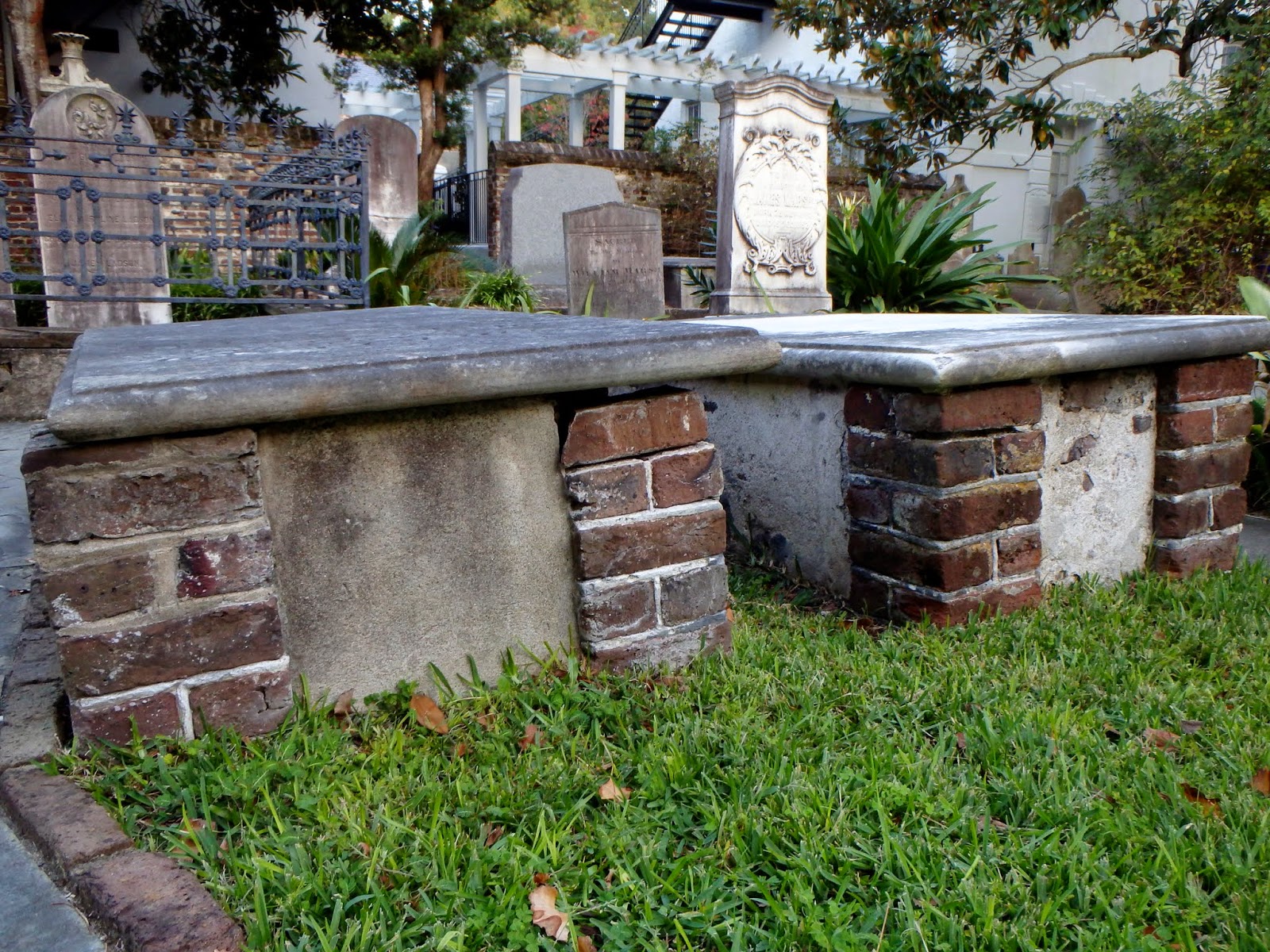 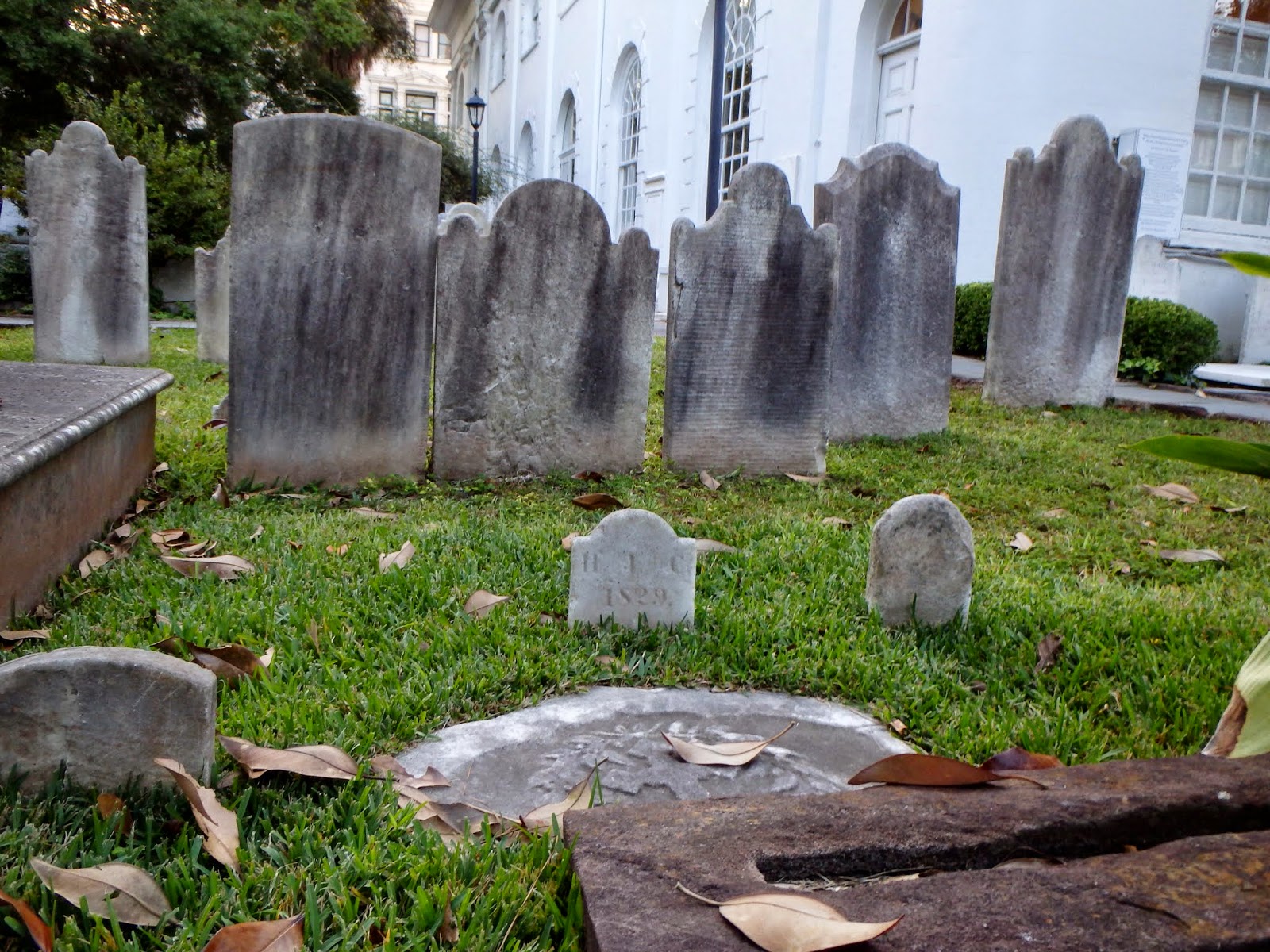 We got thrown out of the Churchyard as the sun started to set.  Time to move on to our meeting place in Washington Square Park.  Darkness fell and a group of about twenty people gathered.  Our guide from Old Charleston Walking Tours collected us all and off we went.

I'm really surprised that I even got Bruce to agree to do this.  He's very practical and there's not a supernatural bone in his body...  But once you get over any lingering "cheesiness",  hearing about local haunted spots can provide a perspective that is different from the history that you normally hear about in a place like this.

The first stop is where introduced to the story of Lavinia Fisher.  She was reportedly the first known woman serial killer, and later the first white woman to be hanged...  Until then, the more gentle method of burning at the stake was reserved for the delicate white woman...  The story goes that Lavinia now continues to haunt the Old Jail where she and her husband were kept while awaiting their deaths. 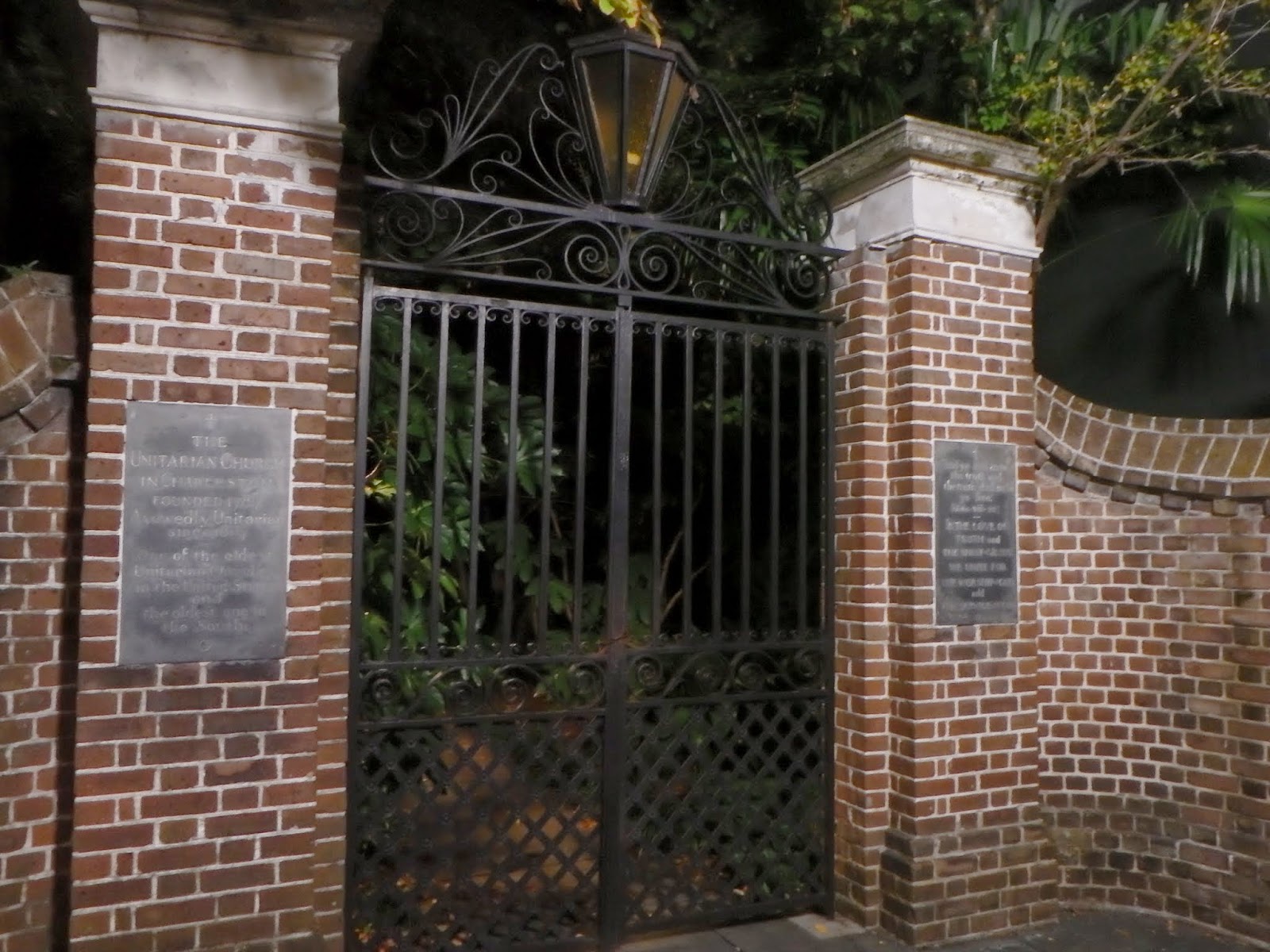 We didn't visit the Old Jail, but we did stop outside the gates of the Unitarian Church Graveyard.  The connection here goes like this...  The Fishers were not buried in a cemetery... they were buried in a Potter's Field near the jail.

Very soon Lavinia's body disappeared from the field site and was reportedly buried in the cemetery next to the Unitarian Church by some misguided but ardent admirer of her earthly beauty...

The authorities found out about it and had the lady disinterred once more and moved to yet a third, and to date, unknown final resting place.  So while Livinia's ghost can be seen peering out through the windows of the Old Jail,  there is another unsettled spirit who reportedly wanders eternally through the Unitarian Church Cemetery where we now stand nervously peering through the iron gate...

Behind these gates lies the body of Anna Ravenel.  You might remember the name as it graces the Ravenel Bridge that we traversed on our way to Sullivan's Island.  Anna fell in love with a young and handsome soldier, Edger A. Perry.  Her family had other plans for their daughter than that she marry a poor man, and so they met secretly until her father put a stop to it by having Perry transferred away...  Poor Anna died soon thereafter and her father buried her here in the Unitarian cemetery.  He bought several plots around her to keep her suitor from knowing exactly where she was buried, thus thwarting the lovers even in death.

What ever happened to the suitor?  He left the Army after dropping his pseudonym and died at the age of 40 after aspiring to be one of the most important literary writers... Edgar Allen Poe.  His last complete poem was written about Anna... who continues to haunt the Unitarian Cemetery. 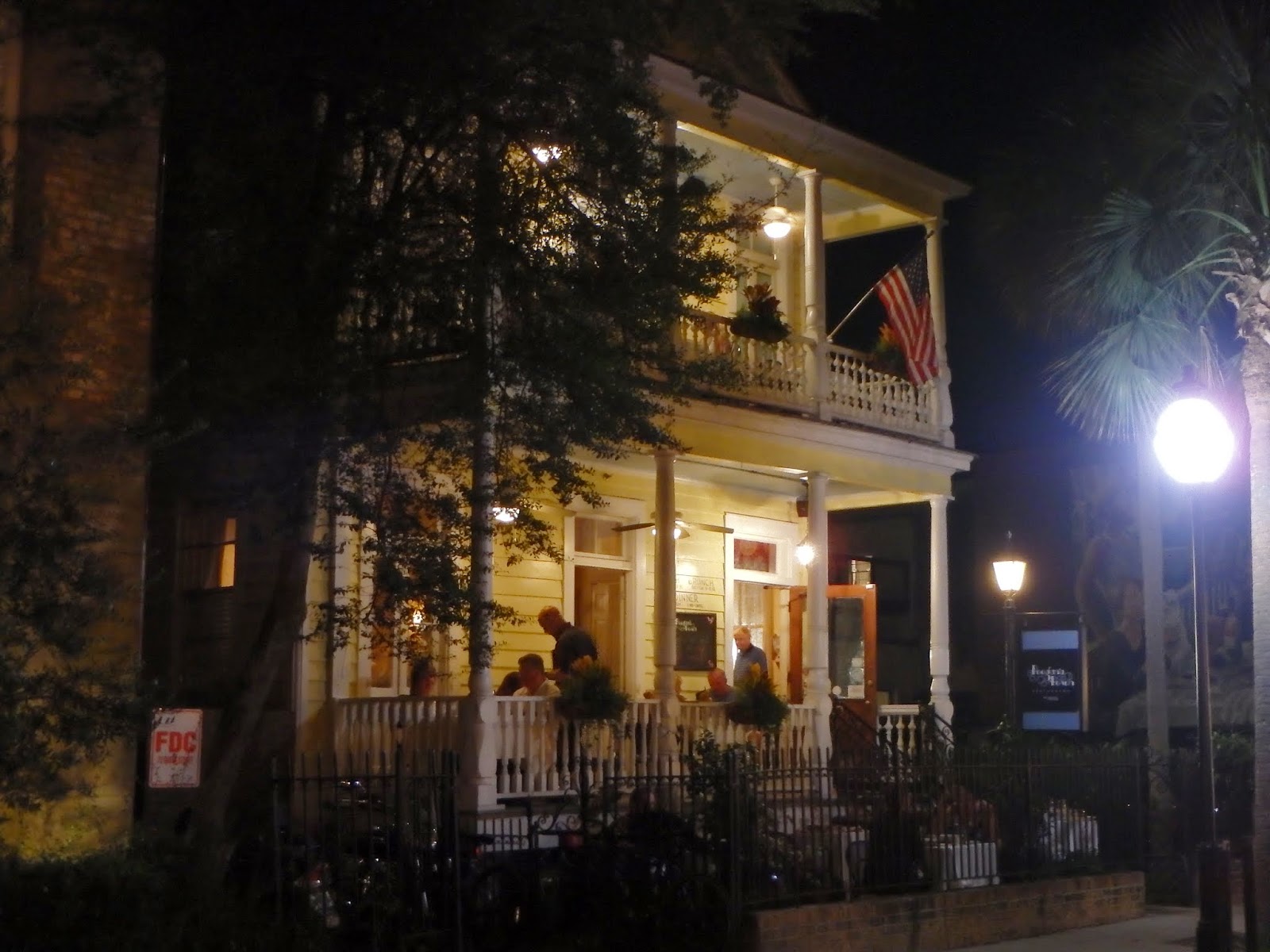 We next paused outside the popular Poogan's Porch Restaurant, where it is reported that the ghost of Zoe St. Armand, former resident of the old home, can be seen haunting the halls and the restroom.

It is said that guests staying in the Mills House Hotel across the street have seen Zoe staring at them from inside the house.  But the patrons of Mills House have problems of their own... with the ghost of a Confederate Soldier tromping up and down the halls...


The haunting never stops!  The Meeting Street Parking Garage is reportedly haunted by the ghost of an unknown Quaker, left to walk the lonely garage forever after it was built atop of a Quaker cemetery... They were supposed to have moved all of the Quakers buried there... maybe they missed one?  Nothing is left to mark the cemetery but this iron fence and gate.... and the one ghost of course.

One of the more famous haunted cemeteries is the St. Phillips Graveyard where there motto is "The Only Ghost Here Is The Holy Ghost"...

It was easy to imagine standing outside this well lit and orderly graveyard next to the towering spire of the church... in the dark streets, still and quiet... nothing but the eerie voice of our guide as he weaves the web... 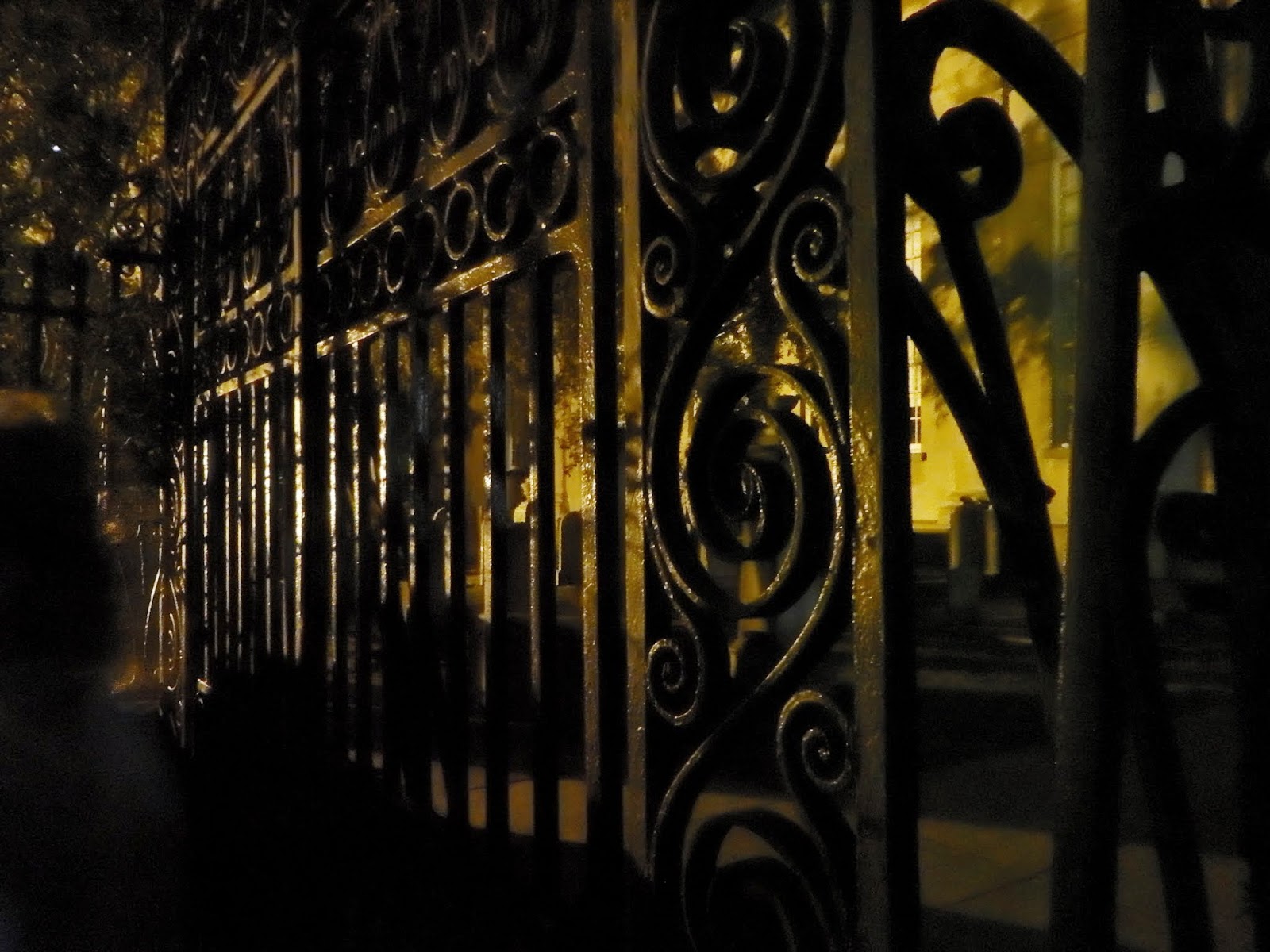 The story goes that a young wife, Sue Howard gave birth to a stillborn child.  Sue became mortally ill and died six days after the death of her child.  She can be seen huddled beside the grave of her child, sad for all eternity. 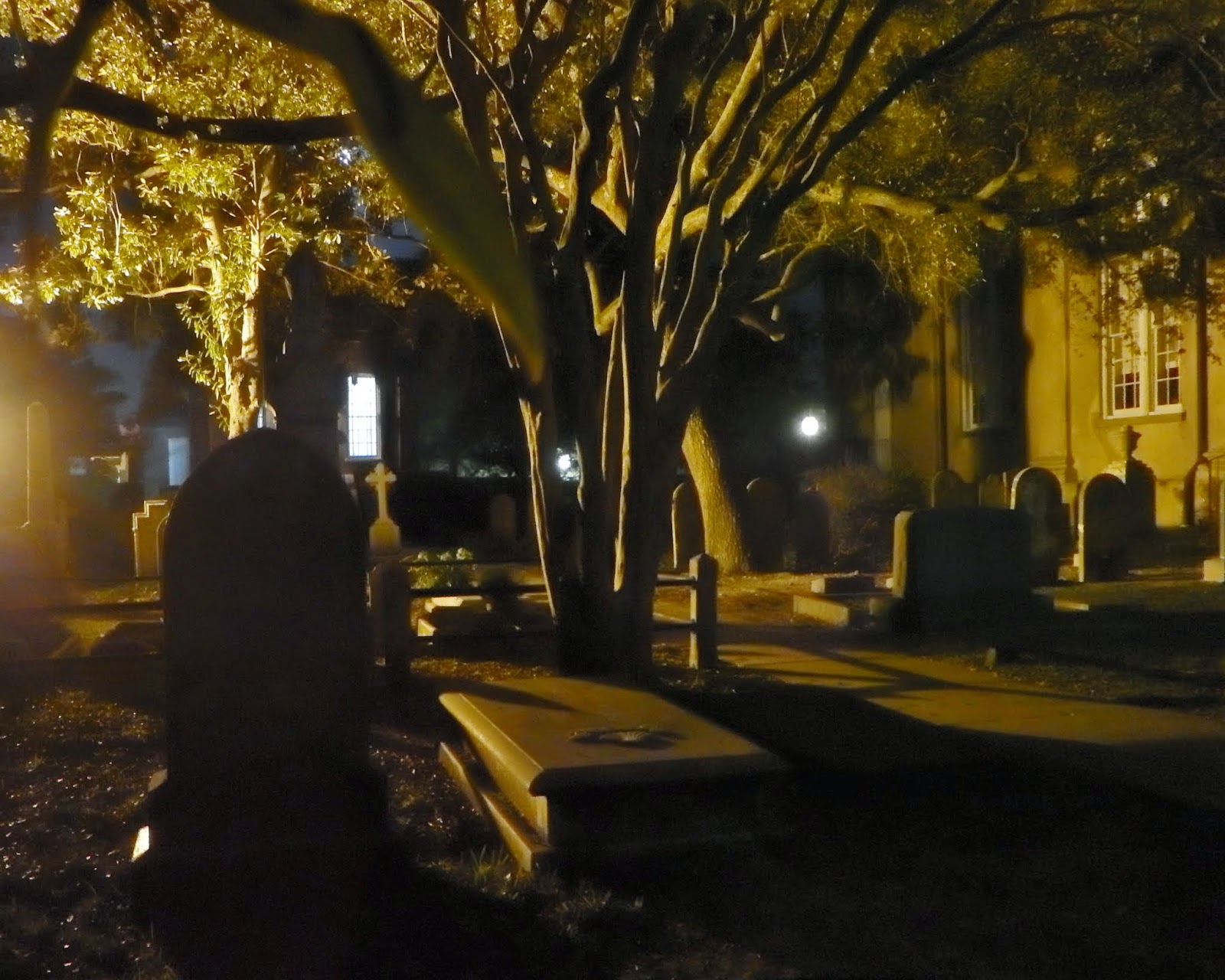 The legend goes that an amateur photographer snapped a picture of the graveyard, much like the ones I took...

Only THIS one caught the figure of the mourning mother as she huddled next to the grave.

Imagine the photo in quarters, she is in the bottom left quarter near the center of the photo.  There was never any explanation of the mysterious figure in the photo, other than the possible other-worldly one... 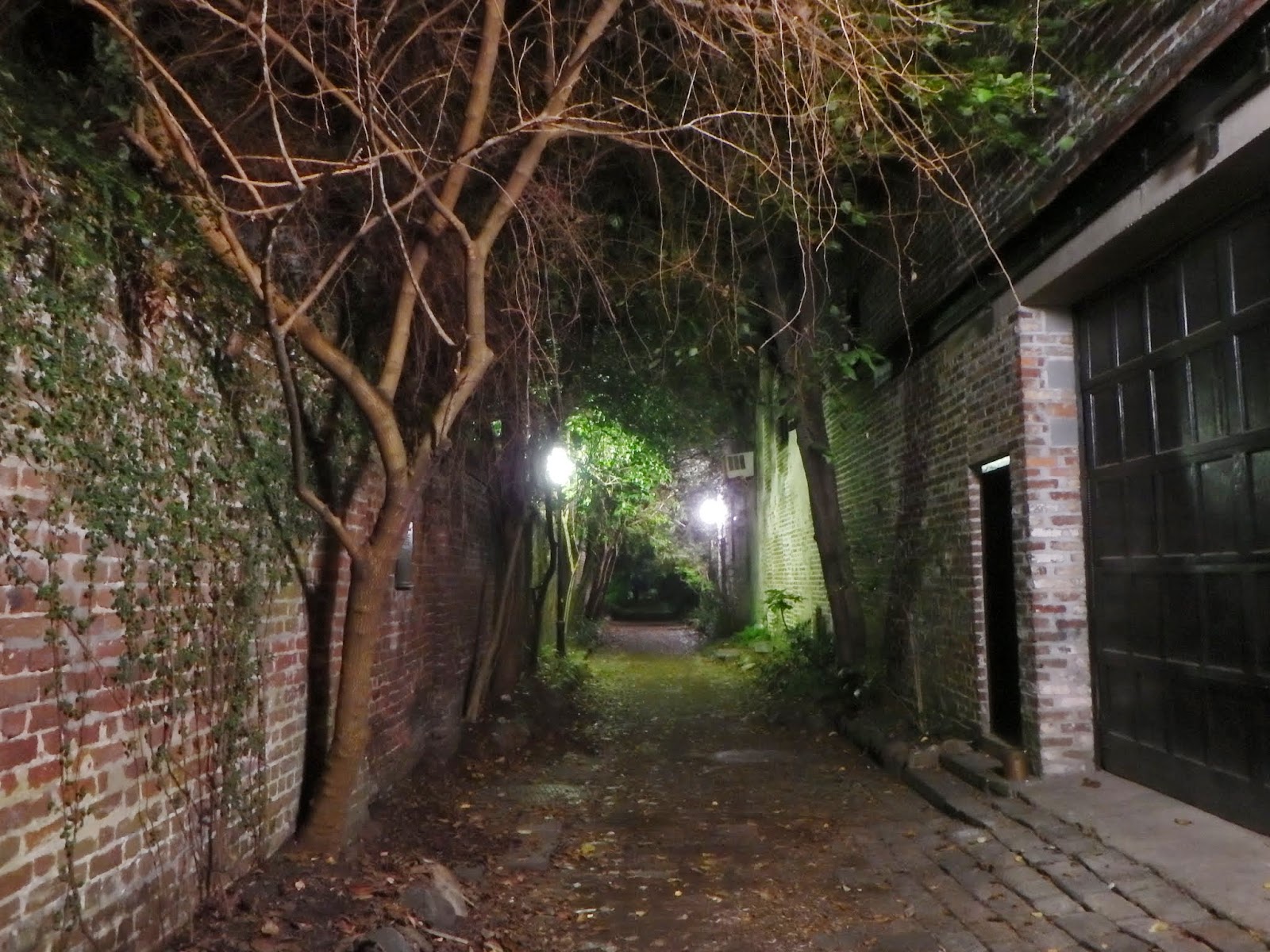 Our tour ended in a dark alley.  Well, it wasn't so dark actually.  Philadelphia Alley.  The place goes by other names as well, our guide chose Bloody Alley as it is most remembered for being a place where gentlemen came to have their duels.

The long narrow passageway provided the perfect place for it.  Hidden from outsiders, the duelists and their seconds could perform their worst in peace, spraying the blood of the fallen on these walls.  There is a story about a young Dr Joseph Brown Lad who met the beginning of his end here.

After becoming a Dr in order to impress the father of his love, Amanda, his own friend began to slander him.  This ended in the duel at Philadelphia Alley where the young Dr was mortally injured.  He was carried back to his rented rooms at 59 Church Street, where he died ten days after the duel.  He still can be heard tromping up and down the stairs, and whistling... at the Church Street residence. 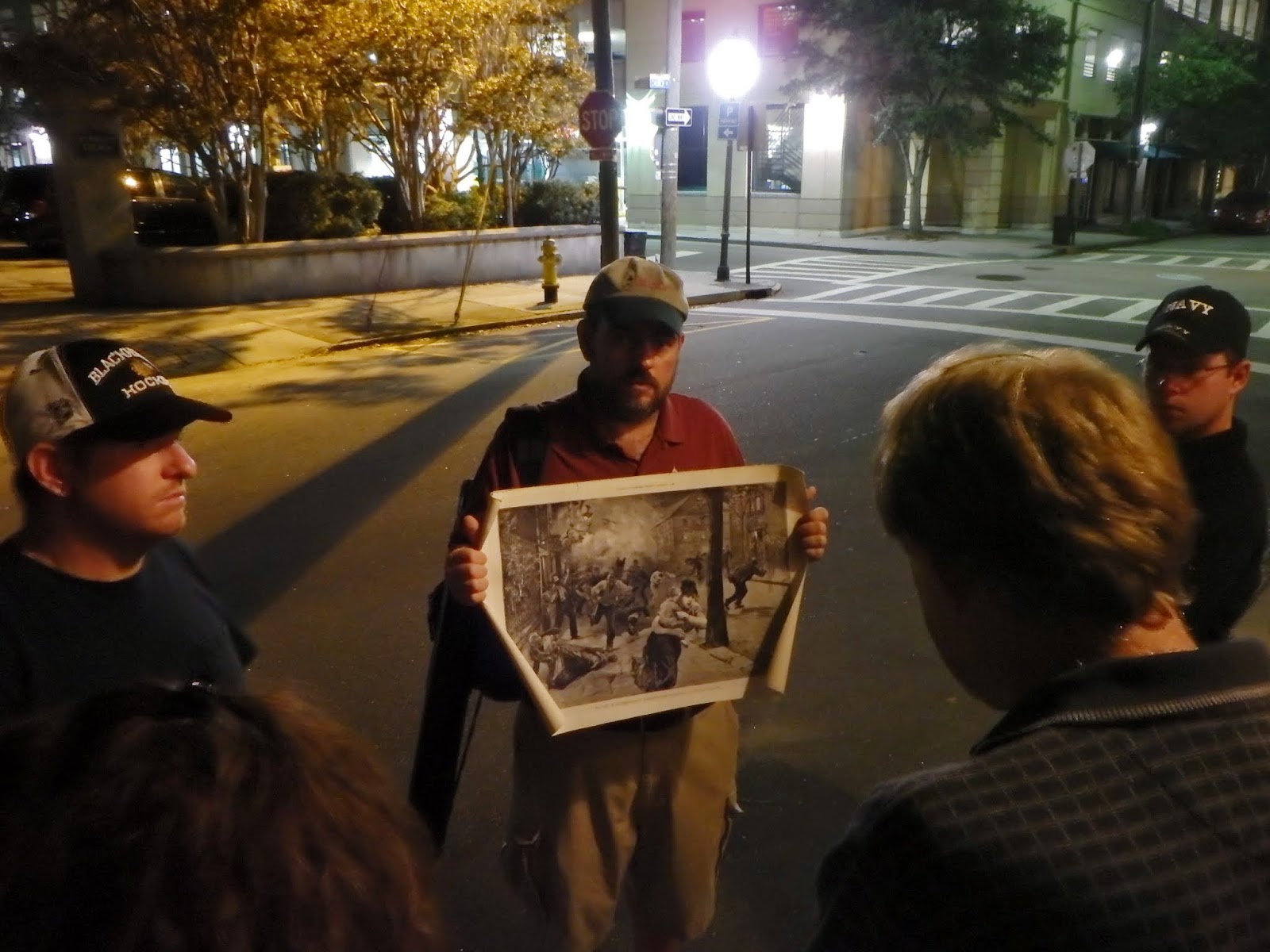 We ended our tour with a strange similarity of events pointed out by our guide.  Standing in the street, he unrolled a print depicting a scene from the Charleston Earthquake of 1886.  The scene shows people running from the cloud of rubble as buildings trembled and fell.  The street looks very much like the one we are standing in now...

Look closely at the print and you may notice that there is what seems to be an airplane rising from the dust cloud at the top center of the print.  Strange...

The print was published by the New York Times with a publish date of September 11th, 1886.  It is very similar to other pictures of a different September 11th...

So it is the ties that bring history together with the present, mixed with the ghostly people who once lived in the place where we now happily go about our days.

Maybe you've never had any type of experience with the supernatural... maybe you have.  But I think most of us enjoy a little toe-dipping into the possibility that there is another answer to the question... What DOES a Cruiser like to do on Date Night?