The Storm At North Palm Beach

Our day started out so well...  We moved the boat from our anchorage at Palm Beach mid morning, congratulating ourselves on hitting the tide just right for an extra boost.  Not that we needed it really, we were only going about four and a half miles.

We arrived at our new location which is just South of Peanut Island across the Lake Worth Inlet.  As anchorages go, it isn't supposed to be all that great, but we didn't want to go in closer to Peanut island where all of the other boats were.  Besides... the water looks gorgeous over here!

There is a very strong current but we dropped anchor in a spot that seems to be near enough to a shoaling area to make the current eddy here instead of just ripping through.

Once we got settled and felt secure that the anchor would hold, we took off in the dinghy to check things out.  We found this little pontoon fort on a mooring.  "Pirates Only".  How awesome is that??? 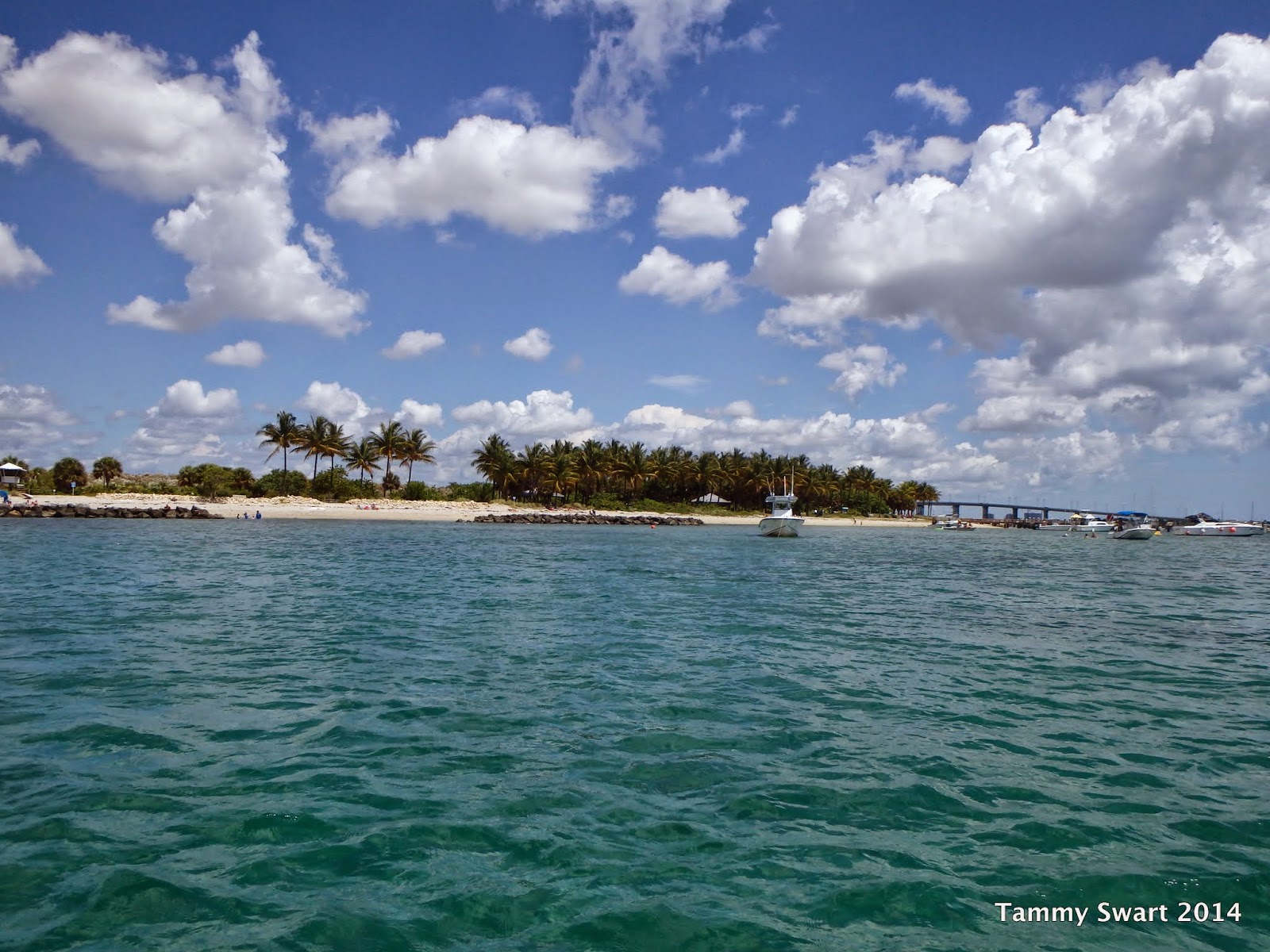 We sped across the inlet channel to  take a look at Peanut Island.  The current was going out and the water clarity near the boat had begun to look like ICW water far from an inlet.  We've noticed that the waters near the inlets are more clear and blue than those in the further reaches of the ICW.  This was the first place we've seen it both ways, depending upon which way the tide was running.


The anchorage on the East side was very crowded.  It was full of pontoon boats that look as if they are permanent hangouts for weekenders.  There were also several liveaboards as well.  I don't think there would have been room for us had we wanted to anchor here, so we were very happy with our choice.


The sky as blue and full of brilliant fluffy white clouds reflecting on the water... over here.  But when we turned back towards home... we began to see a change.

We've had afternoon showers more days than not since we left the Keys.  We always try to be on the boat when they come, but there hasn't been any real reason for concern...yet. 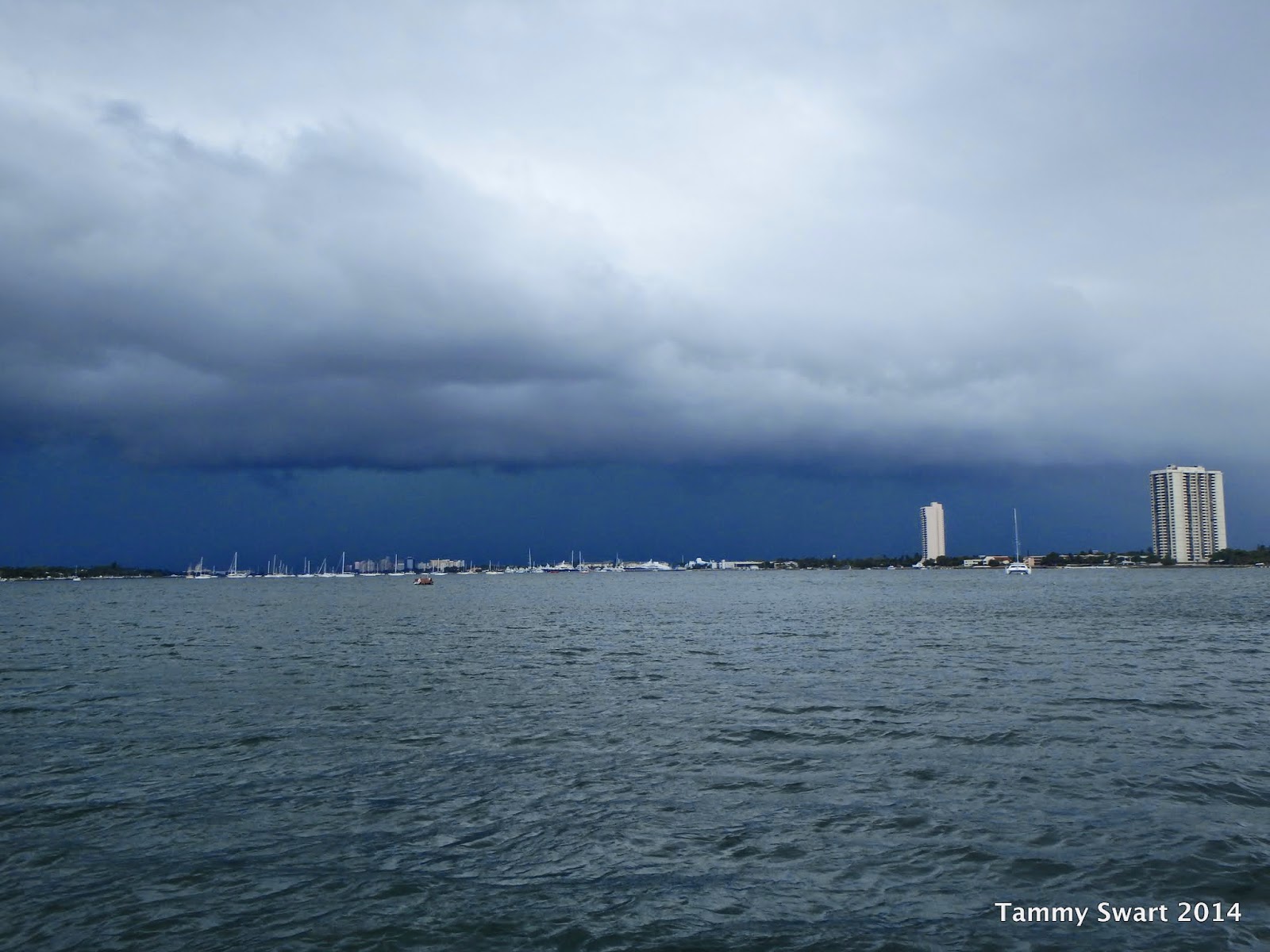 One little shower passed with minimal wind.  No sweat.  But when the next one hit... we knew it was going to be different!

The clouds were a dramatic curtain punctuated with lighting bolts from cloud to ground.  The thunder indicated that the real deal was still a few miles away. 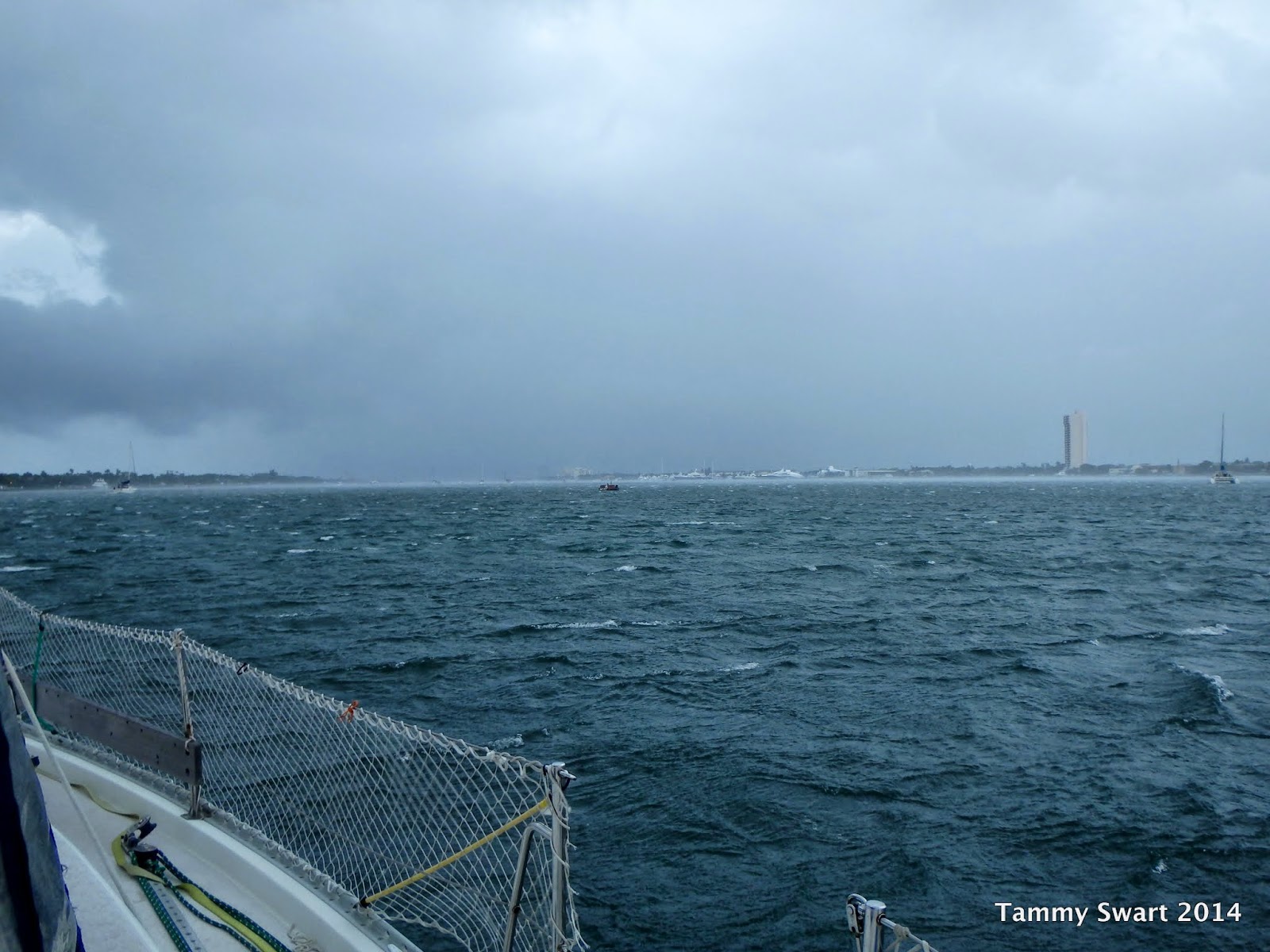 The wind began to whip and blew cool as we looked in the direction of the approaching storm, to see the wall of water coming our way. 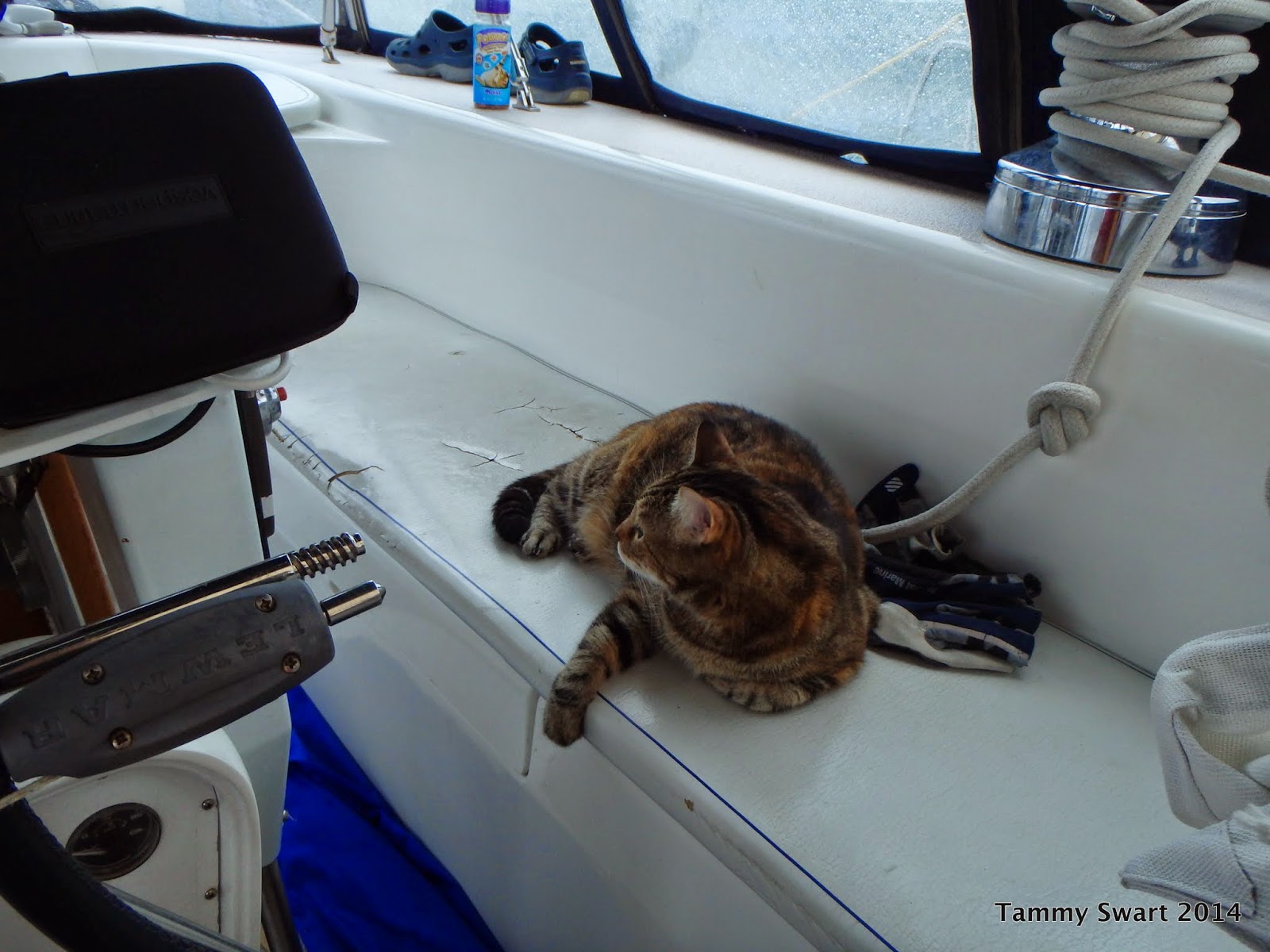 At this point, we were busy rolling down the enclosure parts and making sure that everything on deck was stowed.  The dinghy would just have to fend for itself as it bounced around in our wake as the waves increased.  Jezabelle was still lounging in the cockpit with us when the rain hit, but she quickly changed her mind about it and disappeared below.

I was monitoring the radar and our position using the iPad.  We were swinging around wildly, but our Latitude didn't change.  That combined with the general track being relatively steady, we knew we weren't dragging, but we started the engine just in case.

We could hear boaters in distress calls answered by the Coast Guard and counted ourselves lucky that we weren't out on the open water in this.  We felt pretty confident that we would be fine, as long as we weren't struck by lightning. 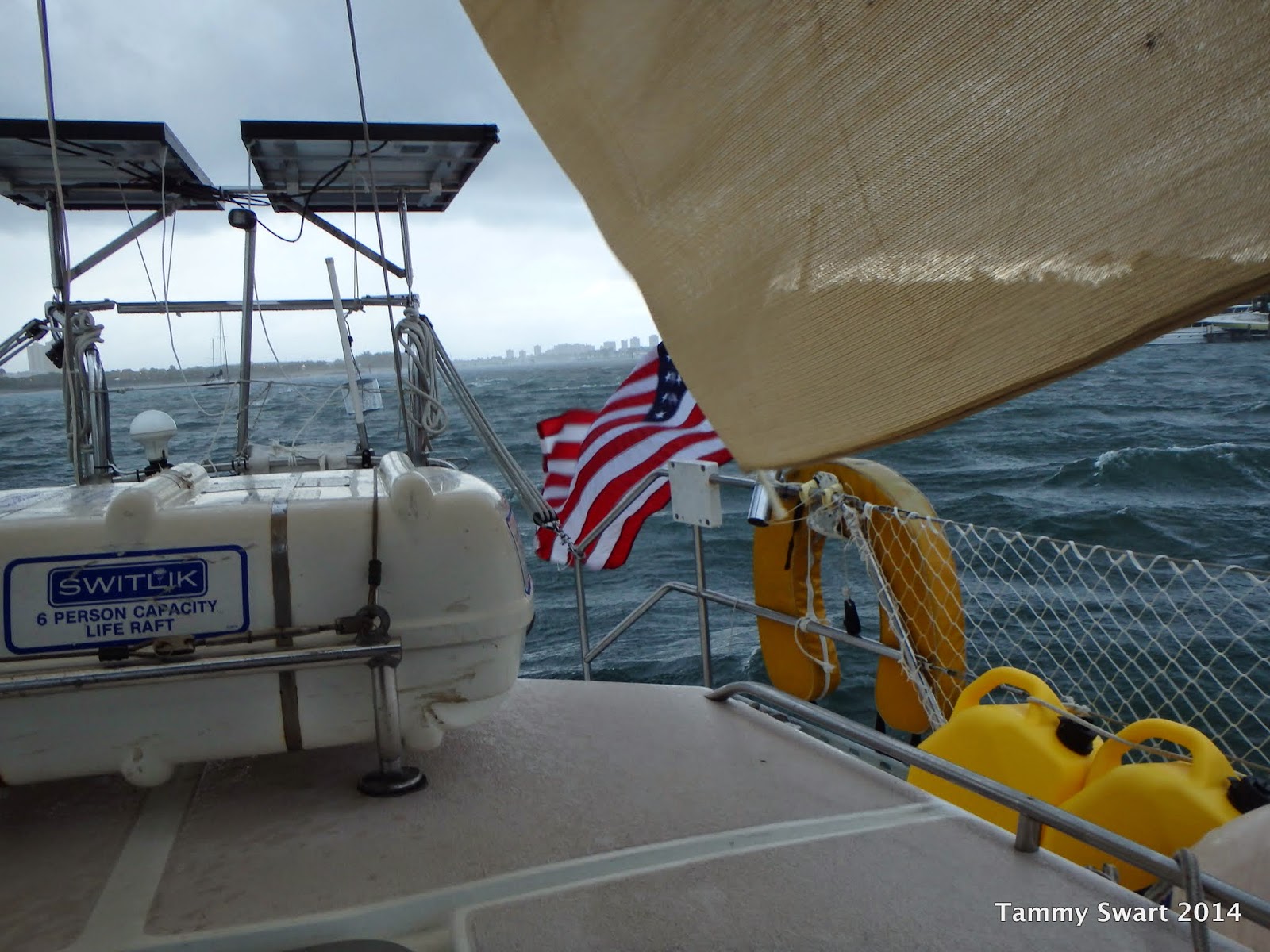 The wind increased from the 20s to the lower 30s sustained and we began to really wish we'd had time to take down our sun shade.  It has made it through some pretty impressive winds, but it was really whipping this time.


As the storm progressed, I kept an eye on it.  Suddenly one of the poles began to bang on the deck.  It must have broken at the apex and was sliding down.  Just about the time I noticed, it slid out and disappeared into the water.  I looked to the other side with nothing holding it in.  It was going as well.  Bruce went out to try to get it but it escaped and went into the water as he tried to wrangle it.  Bruce was soaked!

No worries.  We have the parts on hand to make a new pole for it.  Too bad though.  If this is the worst thing that happens to us in this storm, we'll take it! 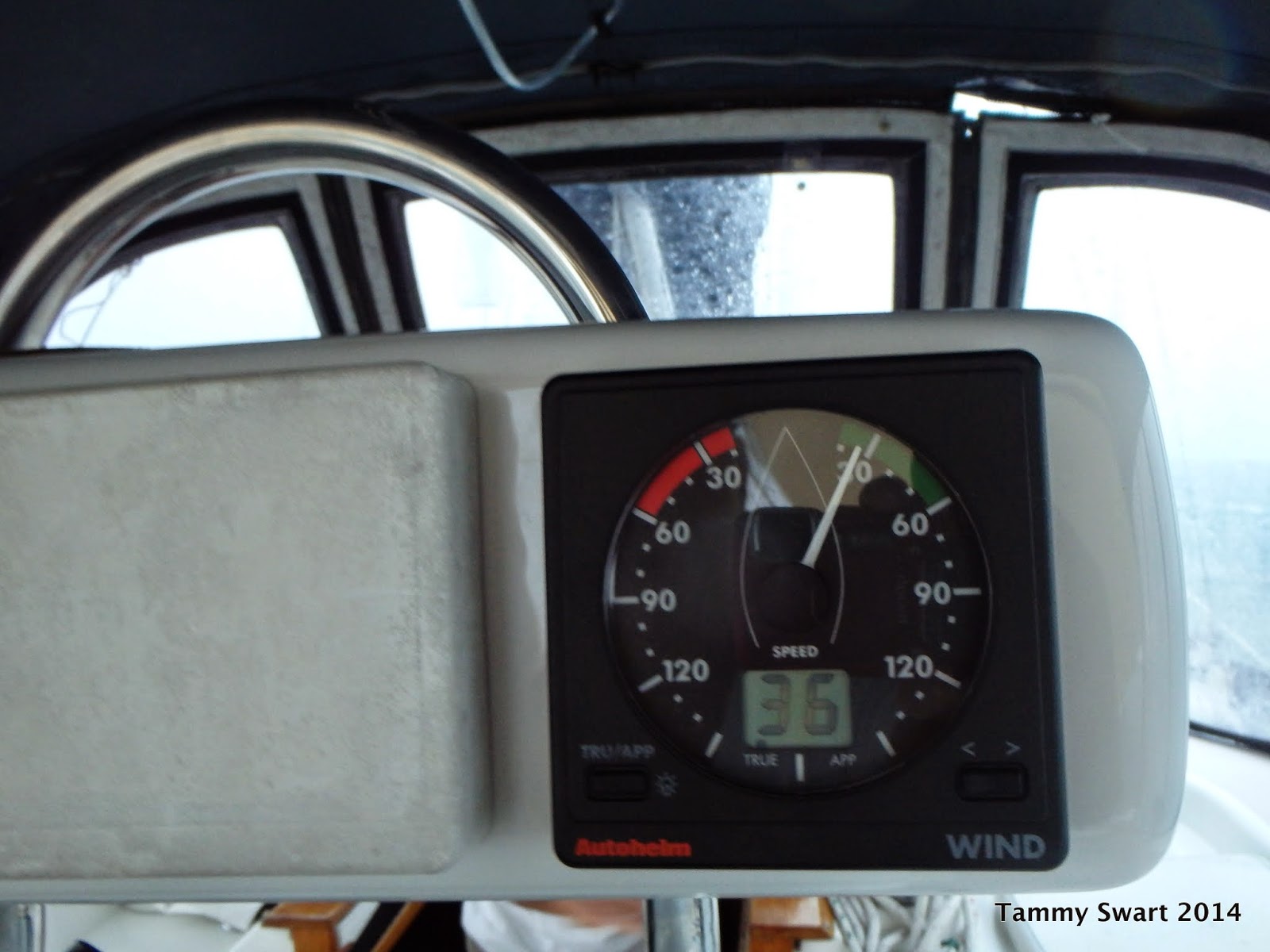 By this time the rain was really coming down.  The boat was hobby horsing and swinging from side to side.  When we got a big gust it would create an impressive degree of heel.  I was watching the instruments, checking our position continually and calling out the new high whenever we saw another knot...  37 was the highest I saw. 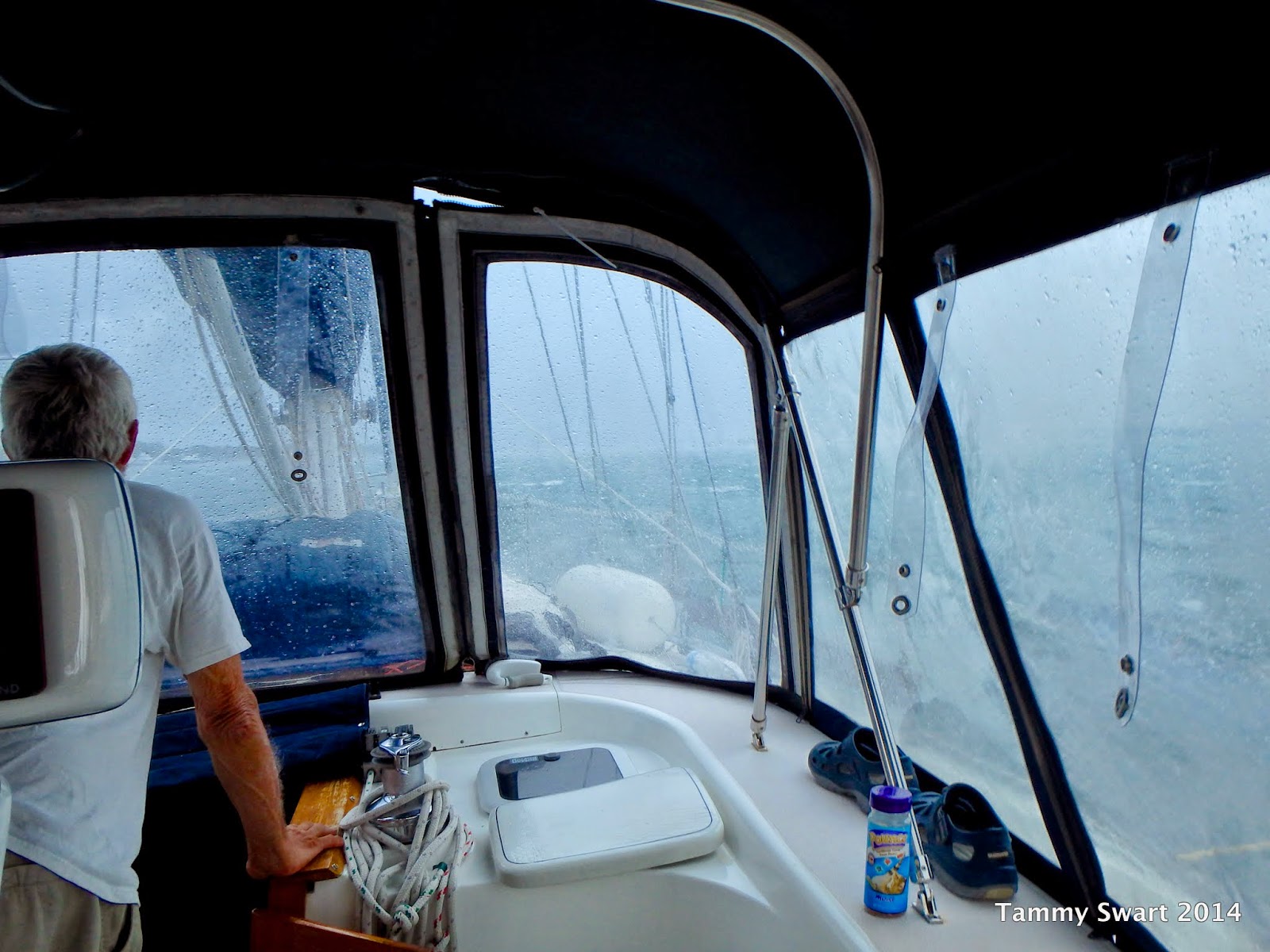 During the worst of it, we began to get wet.  Our enclosure is really good, but it can't work miracles. 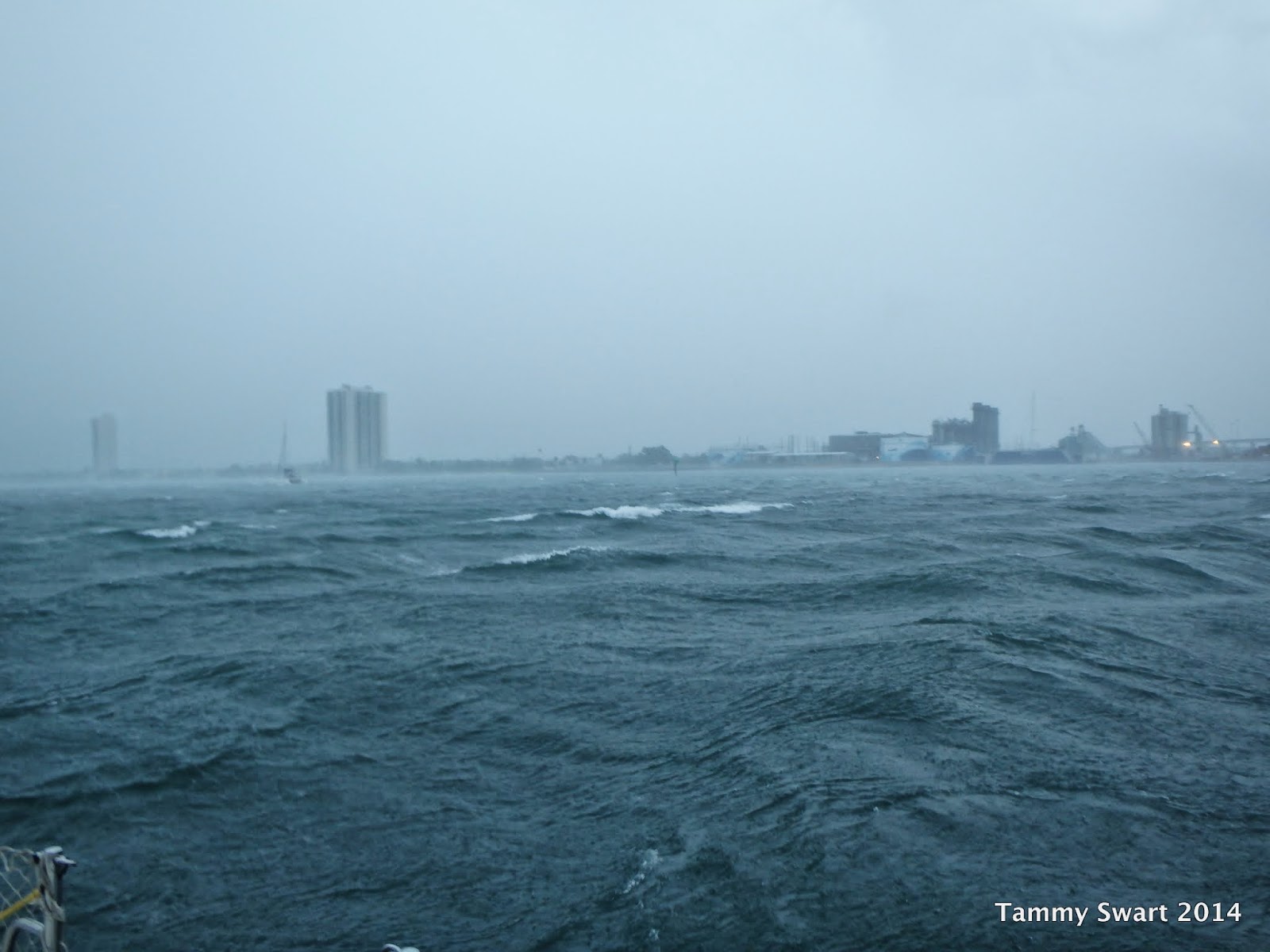 The wind was blowing horizontal rain and the waves were crashing around us.  The water was wild.  The pictures do not do justice to the fury of the storm. 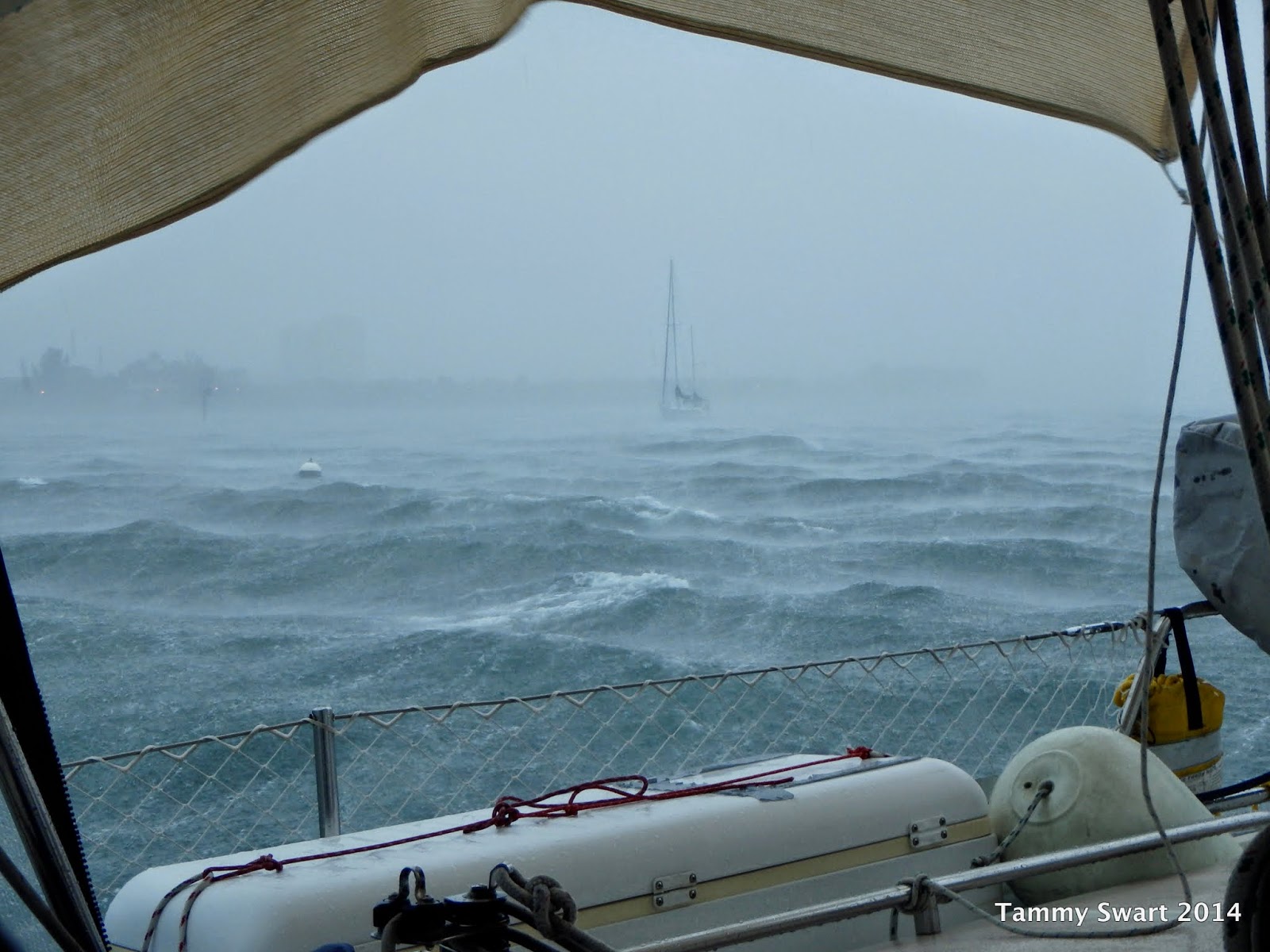 We felt pretty confident in our own boat but we had some doubts about our neighbors.  There are two other boats in our anchorage.  They aren't near us, but with the wind clocking around in all directions, it wouldn't surprise us if the suddenly were to appear closer...  We kept our eye on them as best we could with the sheeting rain.

Enough is enough!  How long will this go on?  It has to end soon!  I kept checking the radar and it seemed to move so slowly.

Finally, the winds died down to sustained 20s again, then the waves began to lessen.  It all just stopped.  I could see that we had another wave to come, so we got busy in the "eye" of the storm.  Bruce pumped six inches of water out the dinghy, we took down the remains of the sunshade.  I cleaned up the cat vomit... Poor little darlings.  This was just like an offshore passage to them.

As quickly as it came, it was gone.  The second wave was another insignificant shower, barely worth noticing.  I discovered that we had left two ports open.  How is it that two grown adults can not seem to complete a simple task like shutting ALL of the windows???  So I hung up the wet things to dry inside the saloon and we made ourselves a bowl of hot Wolf Brand Chili.  It just seemed like the thing to do.

This was our first notable storm since leaving home.  With its passing came an increased confidence in our boat and in ourselves.  I wasn't frightened.  We held it together.  We learned a few lessons about being prepared, most importantly not to become complacent.  If the weather looks threatening, prepare fully.  You never know when a storm will get out of hand.

The next day the sun was out again and we had a chance to explore the waters around Peanut Island.  The water was so gorgeous and once more I found myself envying the people who have lived their lives in this place.


Thanks for reading our blog.