Laz-e Daze On The ICW 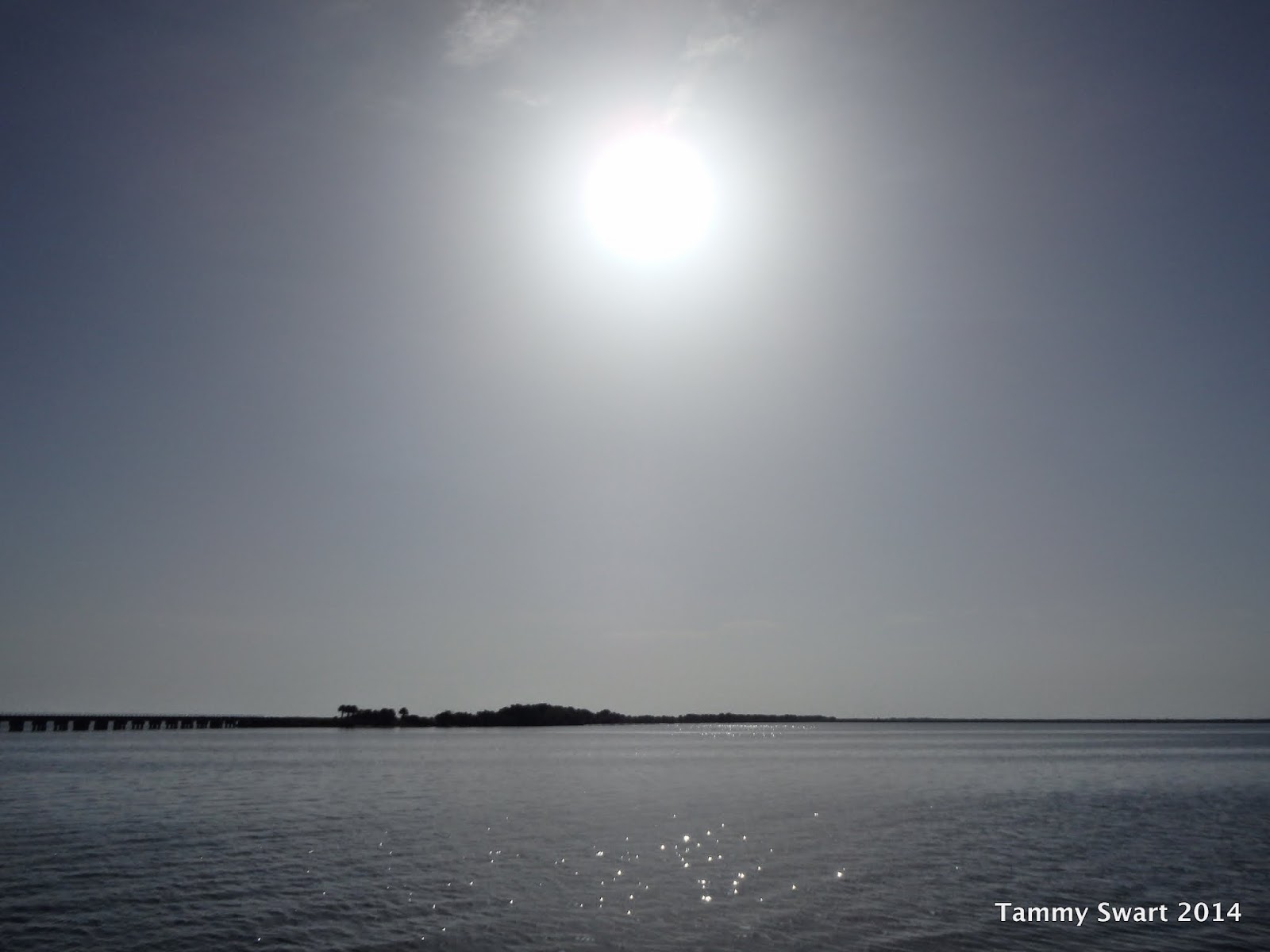 We get up in the morning and we decide.  Do we stay here, or do we move on?  Are there things we want to do ashore here?  Or would we rather save this place for the next time we pass through?

We decided to pass on Titusville and the Kennedy Space center and move on further North.


We've fallen into a pattern of great weather in the mornings and early afternoons... then thunder boomers in the late afternoon/evenings.  This means that if we want to travel far, we need to get a move on early.  There isn't much to do to get the boat ready to go.  We just turn on the instruments, shoo the cats out of our bedroom and pull the anchor. 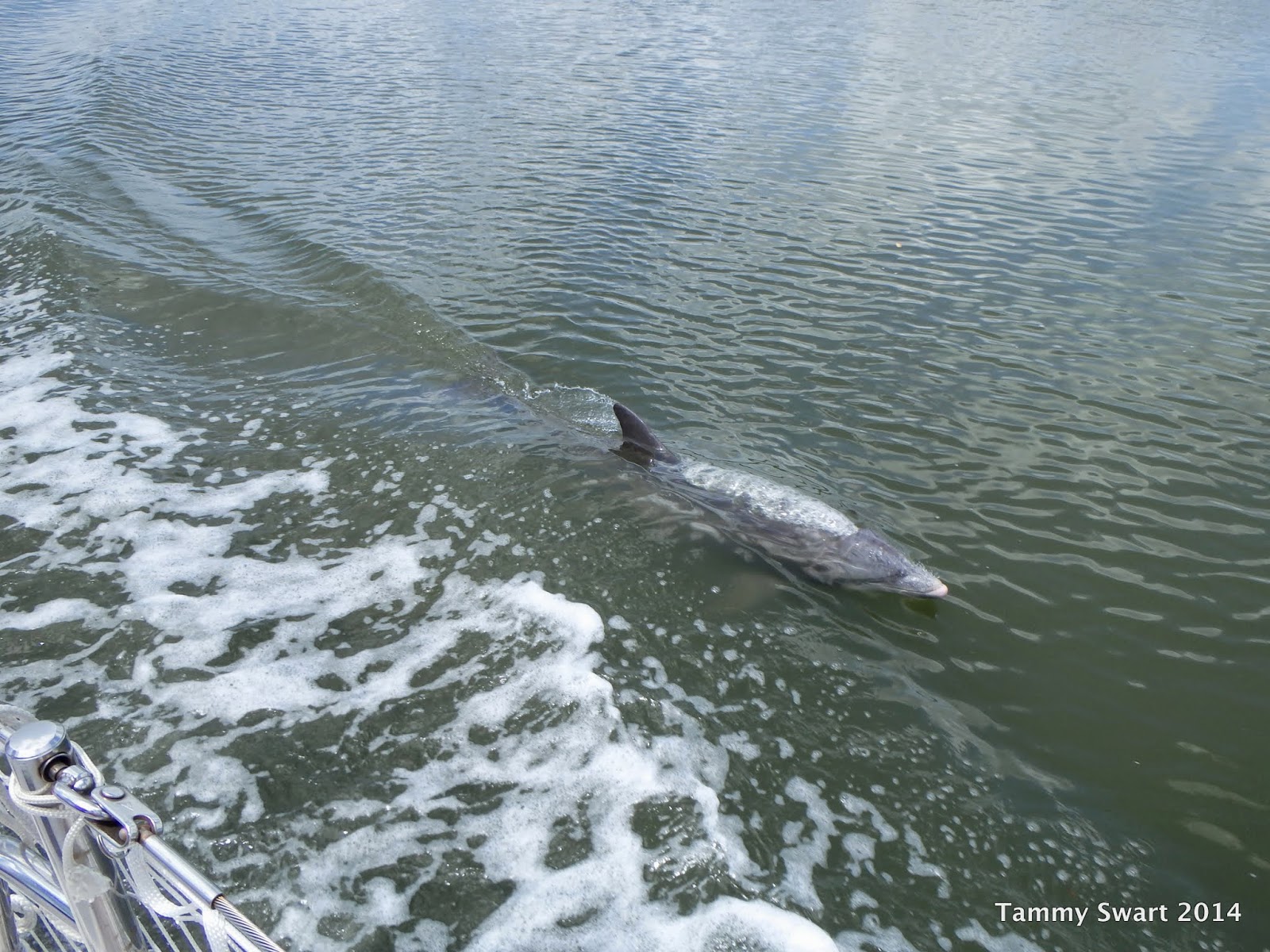 Gone are the wall to wall buildings of South Florida.  This stretch of the ICW has us feeling like we're "somewhere else".  It's more quiet, less crowded and we're beginning to see more signs of wildlife.  We've seen manatee swirls as we glide by these remote islets.  The dolphin are beginning to show themselves again. 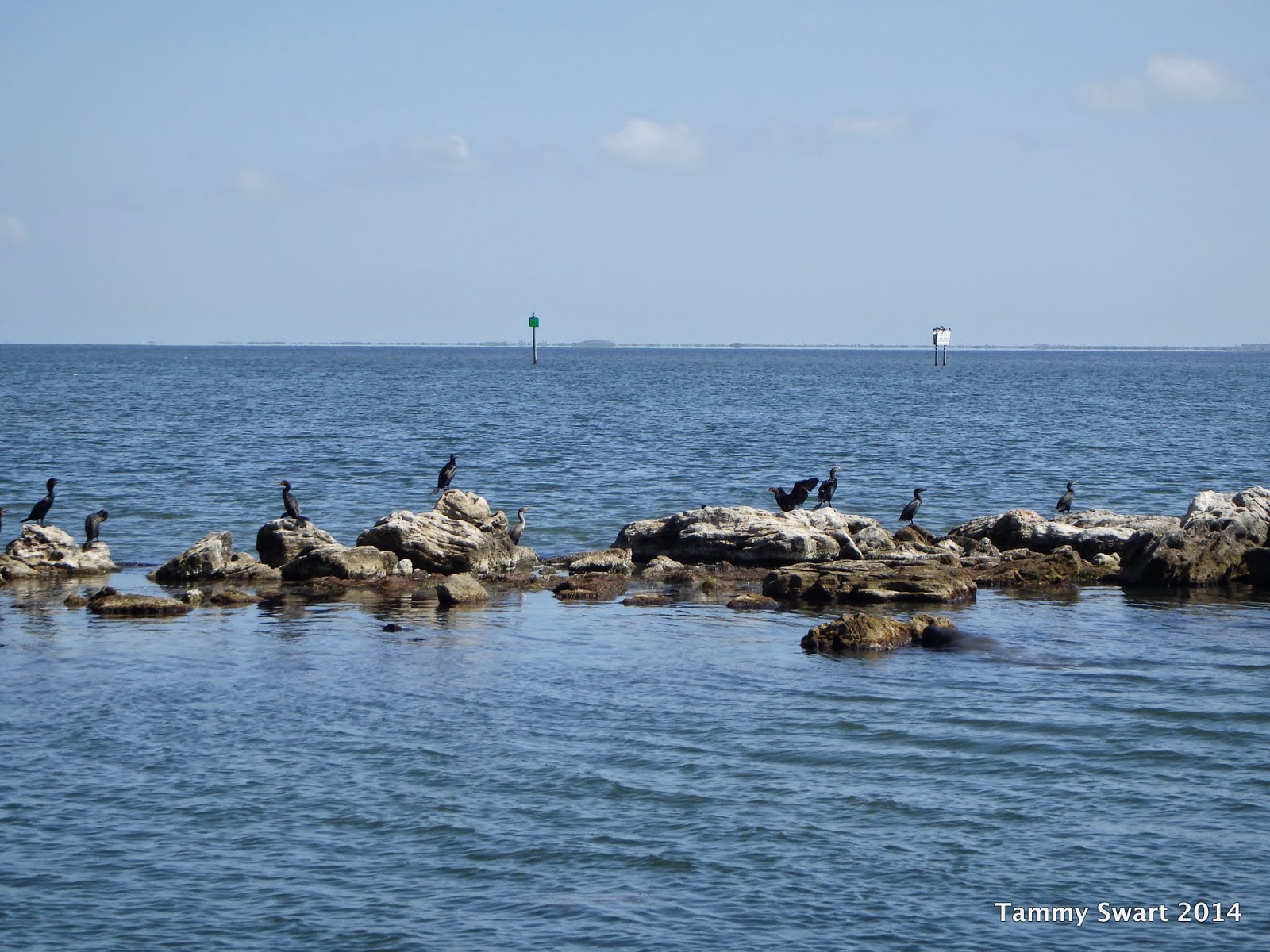 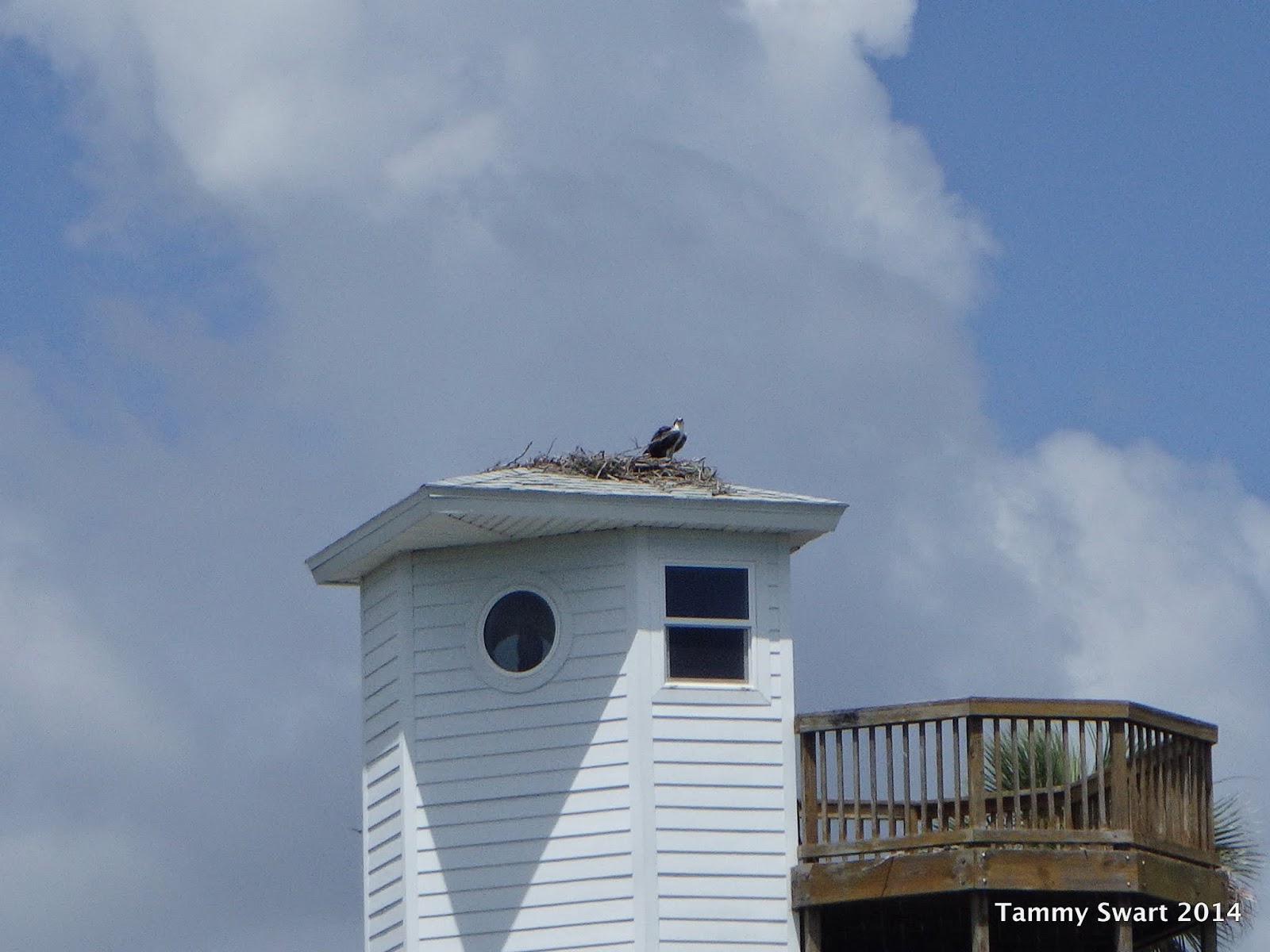 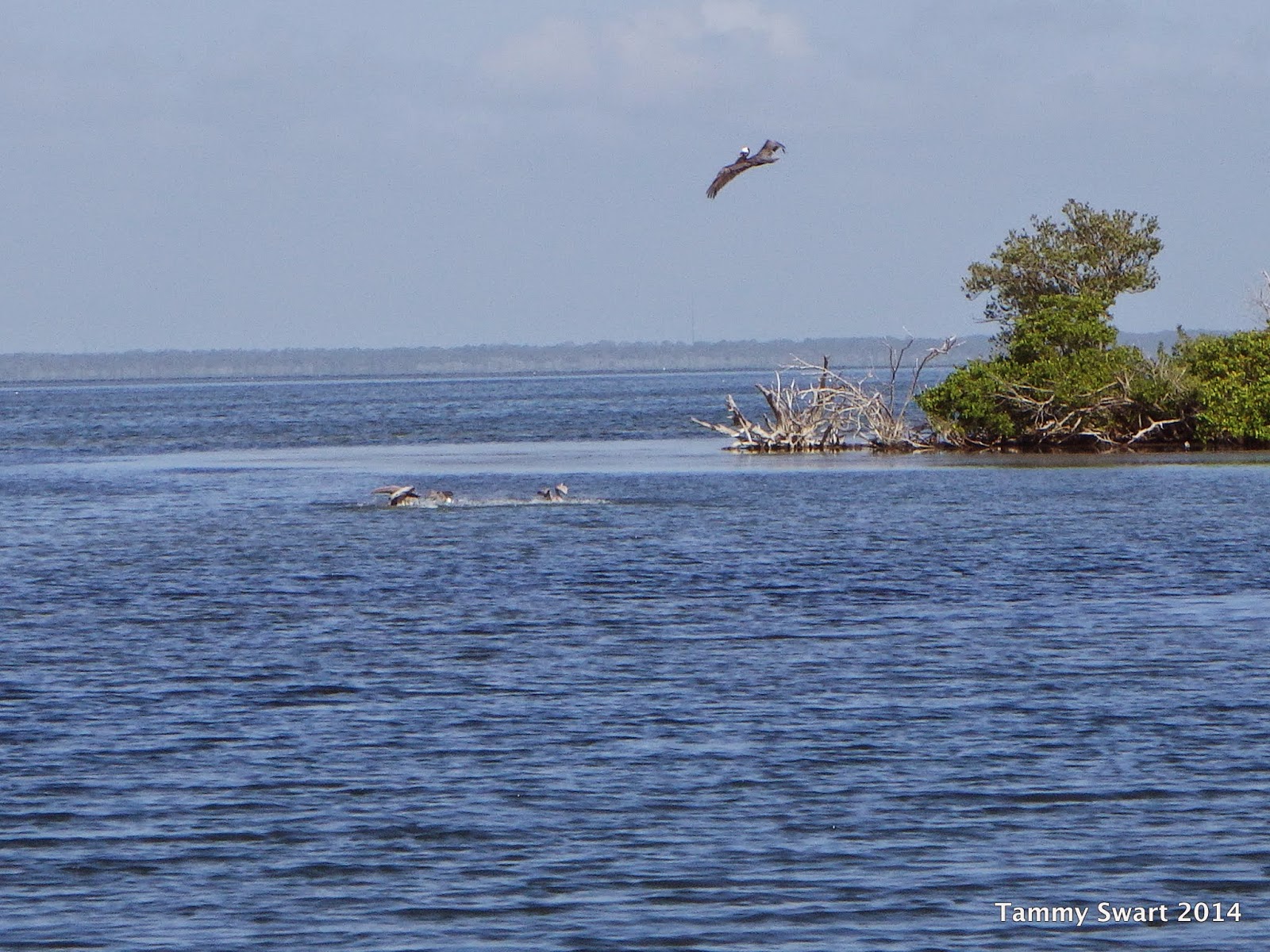 Birds are more abundant.  Osprey calls are common.  Pelicans dive and come up with food every time. 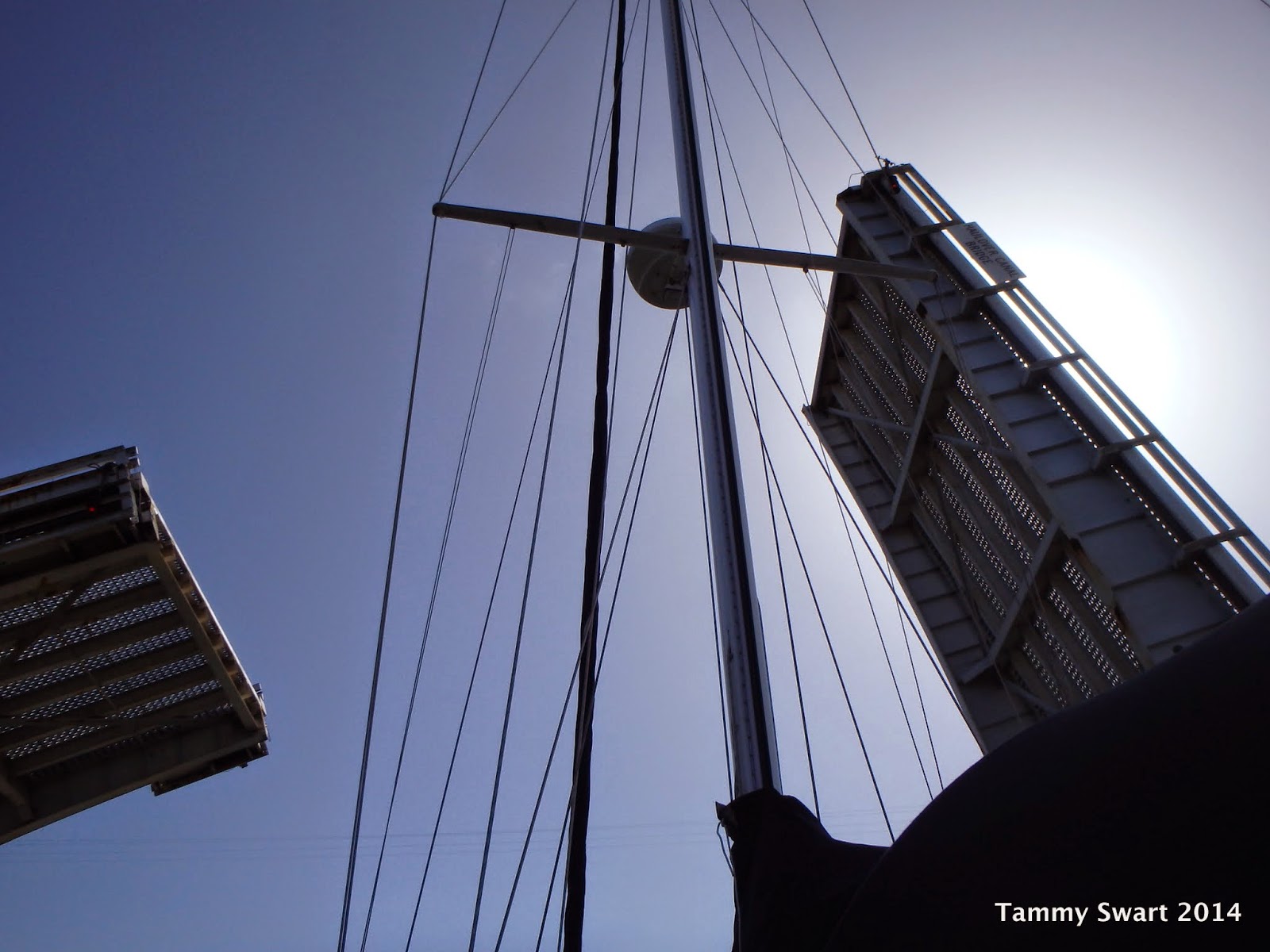 We've left the land of a thousand bridges.  South Florida has so many, we've lost count.  Moving north though, while there are still bridges, most of them are fixed and tall enough for us to pass easily beneath.  Now and then we have to hail a bridge tender, but they seem less stressed out and more friendly.

Life along the waterway is more slow... less ostentatious.  It's a sleepy kind of life where people move at a more leisurely pace.

As we glide through the open marshes and the back yards, I imagine what it would be like to have grown up here.  Florida seems like such a wonderful place to be a kid.  Islets for miles, fishing galore.  What an awesome place to be from...


We keep our eyes open for the quirky things.  You just never know what you'll find today on the ICW...

Our destination today?  Daytona Beach.  All I know about Daytona is that they have some kind of car races there...  We wound our way along the remote parts of the ICW hoping to avoid the thunderstorms that seem to be coming early today.  As we made the turn to Port to go around the Ponce DeLeon Inlet, we got hit hard.  We could barely see for a short time, but luckily there wasn't much traffic and there were no big winds involved.

It's very easy to get lulled into inattention along the way.  The currents can quickly carry you out of the channel if you aren't paying strict attention.  This happened to me while we were passing Cocoa, when I suddenly wondered why there were crab pots in the channel... We were NOT in the channel.  But there was plenty of depth there so no harm no foul... 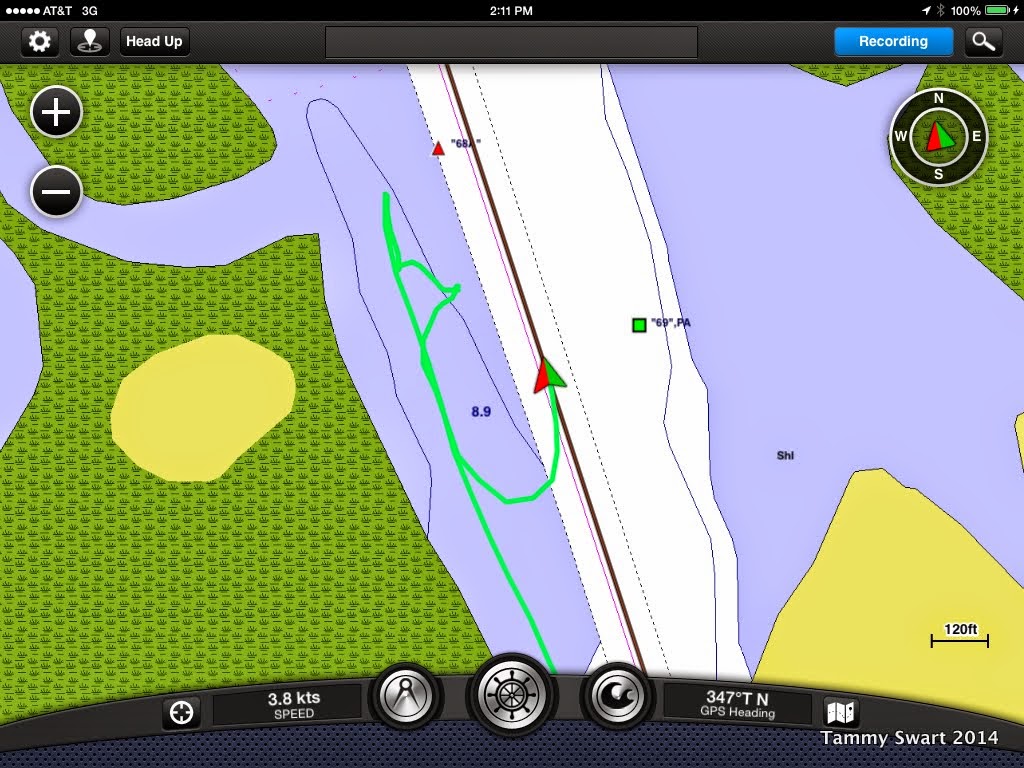 Bruce was not so lucky however... You can see from our track what happened...  We were going along enjoying the wild banks and marshes out in the middle of nowhere... When he suddenly said "is that two red markers up ahead on our right?".  I quickly consulted the chart and yes, we were out of the channel big time!

We were in good depths (for the moment) as there was a charted tongue alongside the channel, but that soon ended.  We came to an abrupt shuddering stop.

Luckily the current was against us and it did a marvelous job of aiding our escape.  The shifting shoals here felt funny as we tried a second escape back to the channel, then finally went back the way we had come for our getaway.  Bruce felt badly about it, but hey... it happens.  If you ain't been aground, you ain't been around. 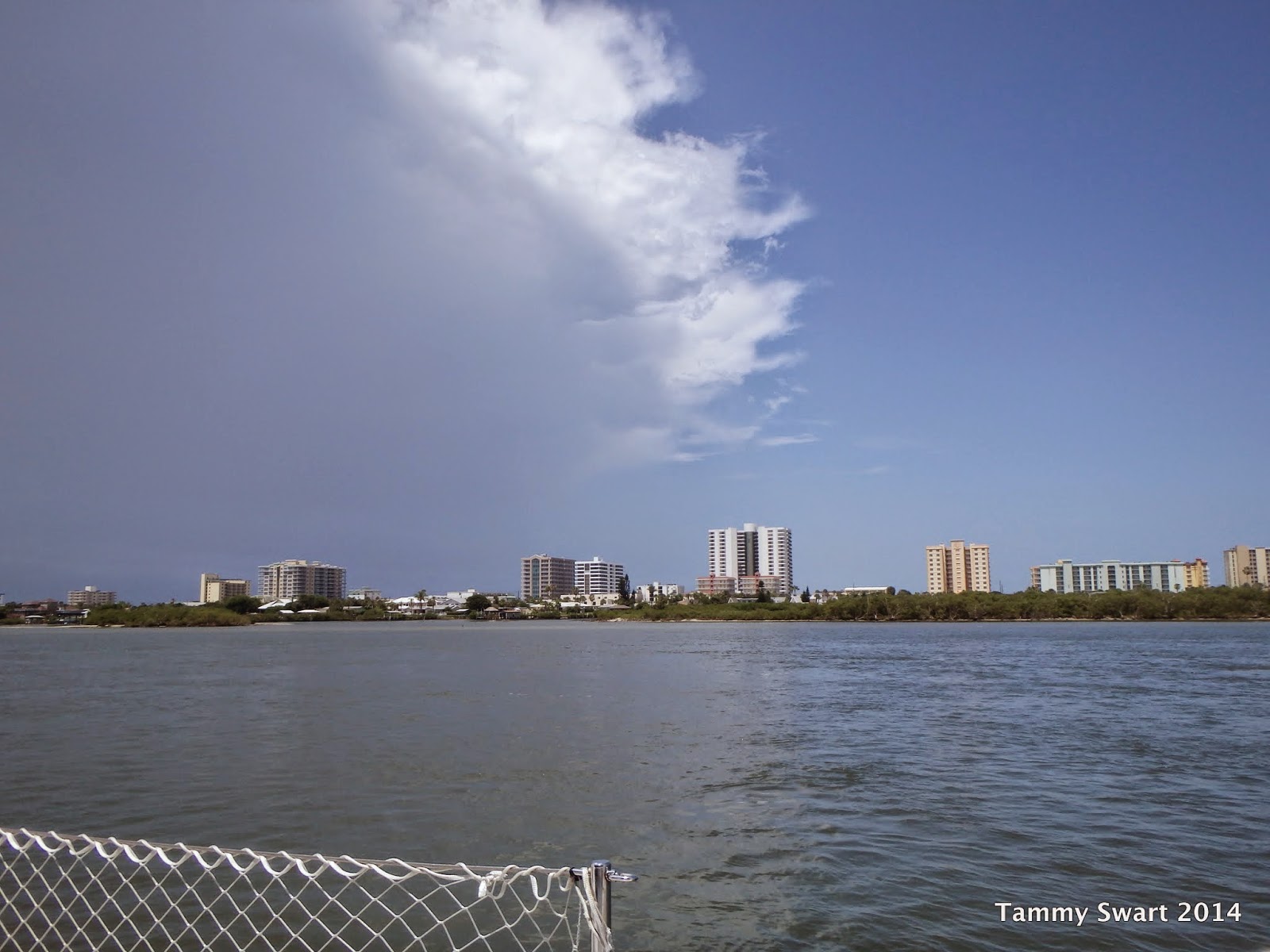 It wasn't long before we arrived at Daytona Beach. The rains had stopped but were threatening a repeat.  We once again changed our plan and settled for a closer anchorage just off the ICW. 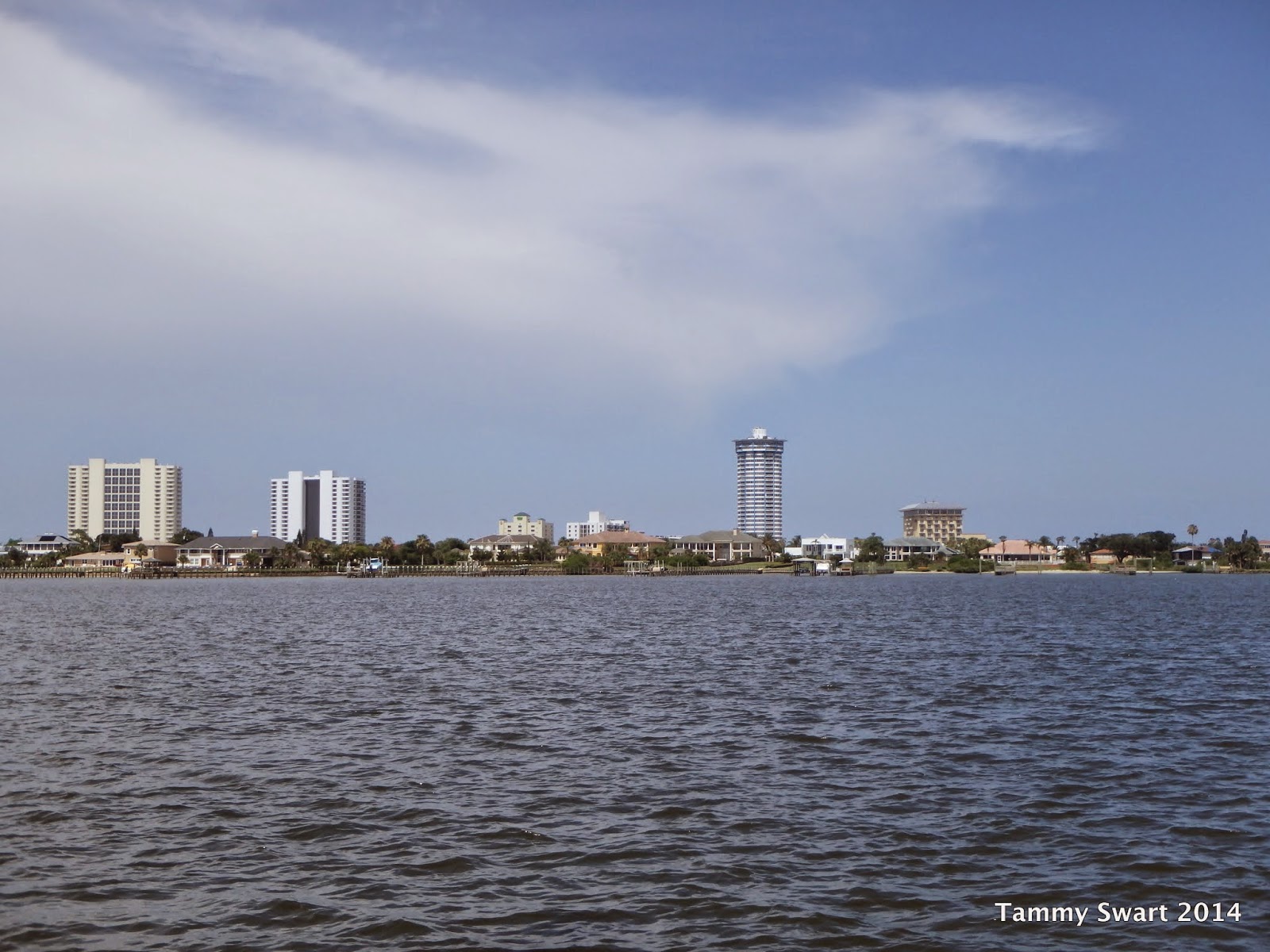 We set our anchor and settled in to enjoy the afternoon.  The current was rushing beneath our boat, but we've become more relaxed about anchoring in strong current.  There was plenty of swing room here and even if we dragged anchor, we could go quite far without going aground. 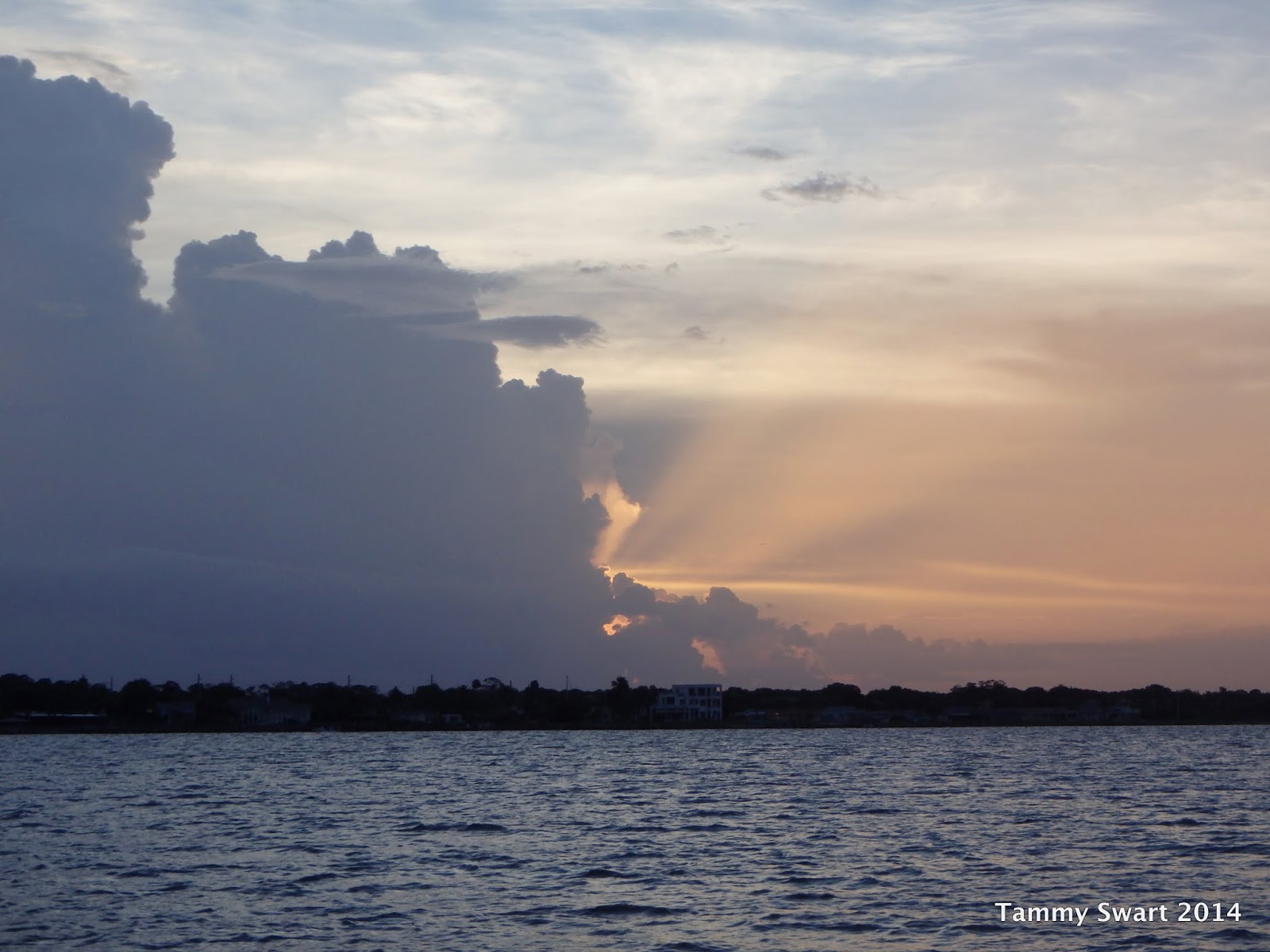 We enjoyed a nice sunset and dinner, then an early night.  We wanted to be up and on our way at first light to make a bridge opening before the rush hour began.

Some bridges have rush hour times where there are no openings.  If we missed this one, we would have to wait until 9:30 for an opening.  We were out by 7:30 and on our way and ready to do it all over again. 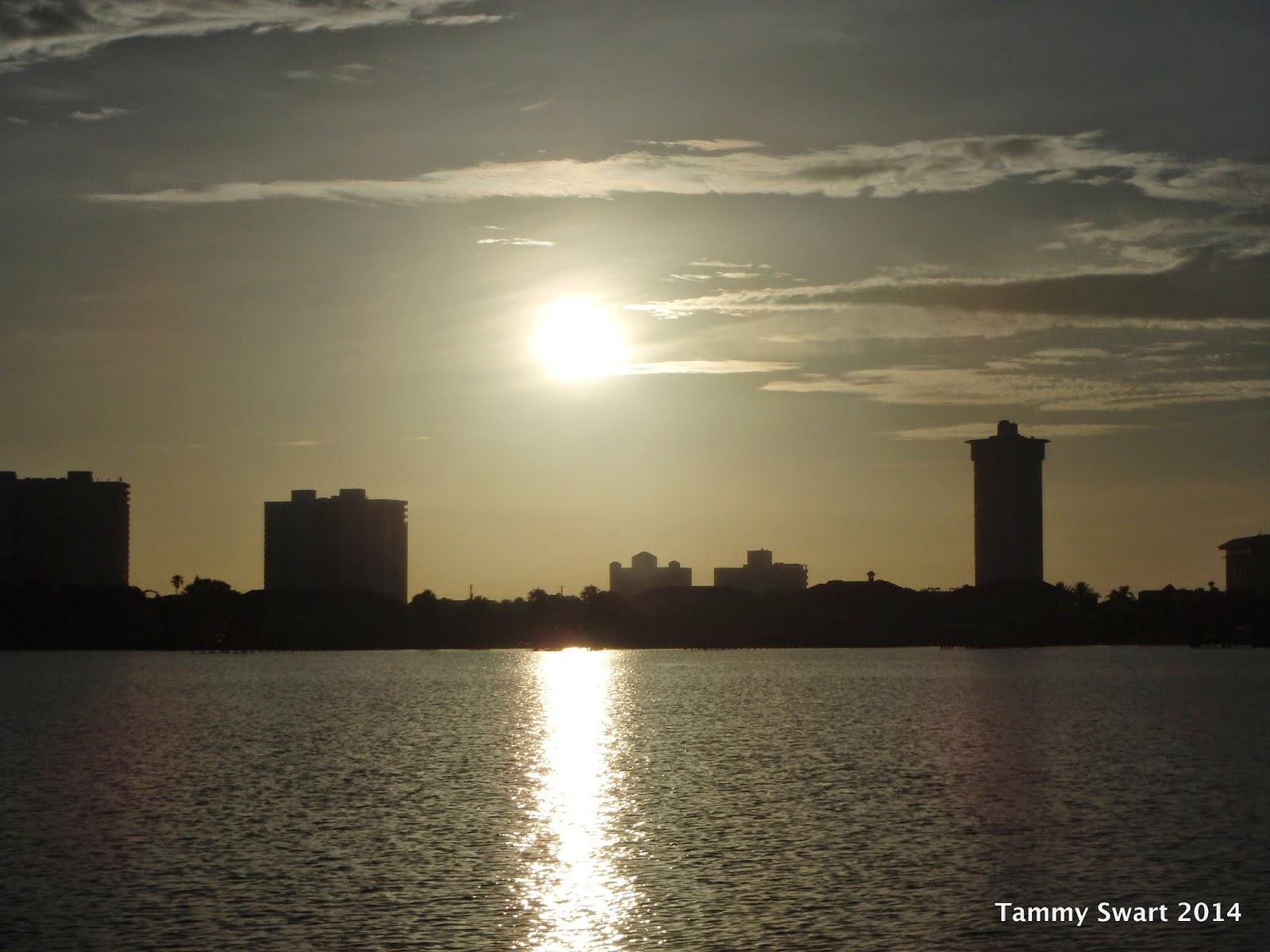 We hadn't realized until we continued on our way in the morning... that Daytona was such a large town.  We passed through the banks of the city and put it on our list of places to stop and spend more time on our way back South in the Fall.  You just can't see everything!

We moved on wondering again... what will THIS day bring?