The Cats Are Worried 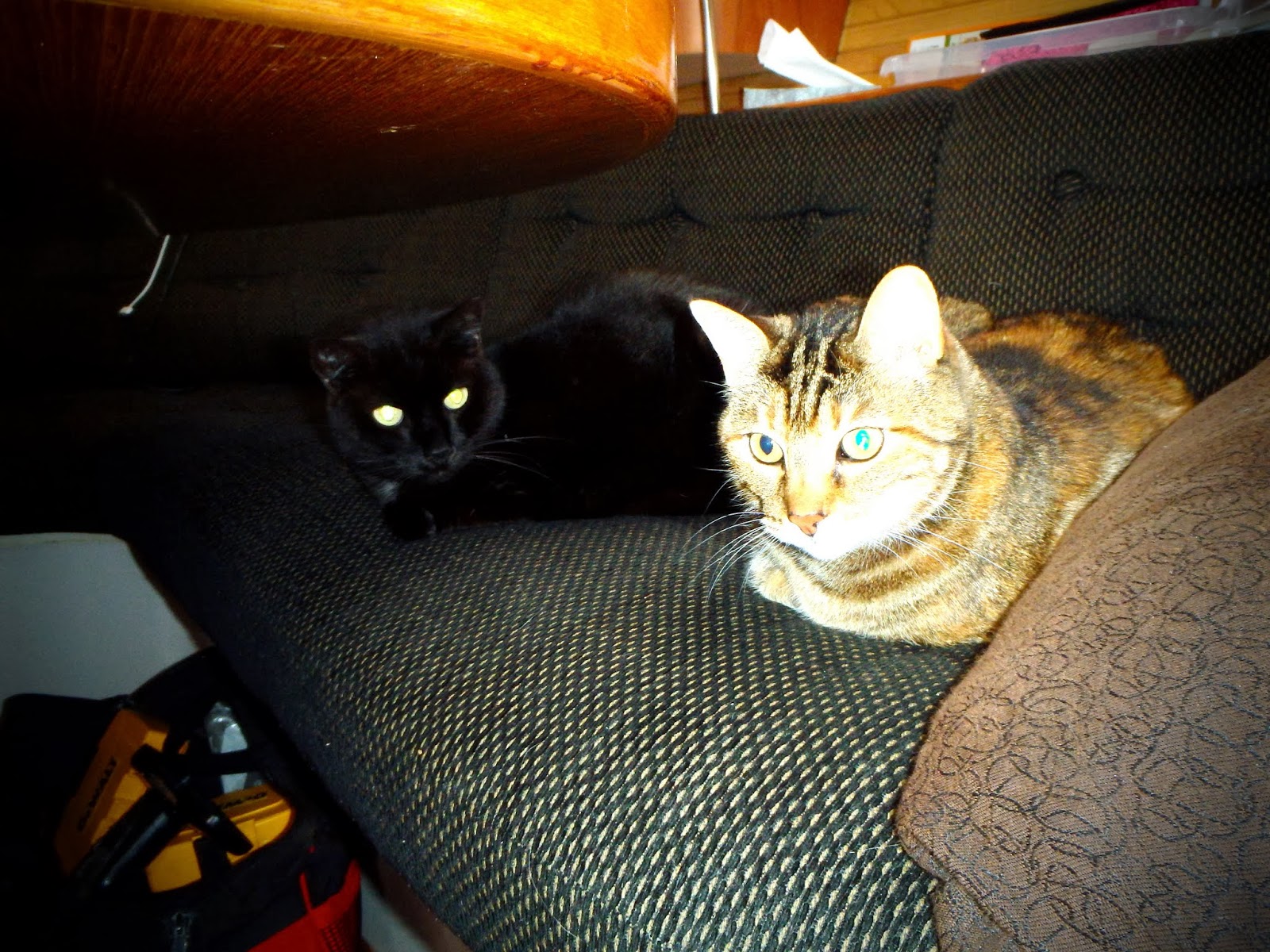 Oh No!!!  What if we can't get into the Bahamas with our Parents!!!???  Jezabelle and Jetsam have just found out that they may be considered Persona-Non-Grata in the Bahamas!!!

The Beginning:  January 29th  Luckily for them, I've known this for some time...  We've been making such slow time in getting this far, that it seems I needed a wake-up call about the Bahamas Pet Permit.  A casual question amongst pet owners at dinner the other night spawned a frenzy to get our ducks (er) cats in a row, so to speak.

Since regulations change with the winds, I waited until it was actually TIME to get started before I did much research about the requirements for bringing pets into the Bahamas.  Plus, I've got such wonderful real-time resources in the Women Who Sail Facebook group.   I've got  "friends" who are entering the Bahamas with their pets literally as I write this, who can be consulted about what they did to prepare and how it all went.

Turns out, the website has some pretty clear and precise instructions for importing cats and dogs.  The requirements are simple and the form is short.  Since we'll be heading South soon, the time to apply for our permit is NOW!  I downloaded the Permit request form and printed copies for ourselves and for our dock mates.  These forms can be sent by regular mail, but in the interest of heading off bureaucratic gyrations at the pass... we chose to Fed-Ex our forms.  The cost of $55 was spread amongst the three of us, so it wasn't that bad, and the forms, along with our money orders for $15 per pet, got there next day.

Next obstacle was how to get the Permits returned to us.  We have no address and no fax.  Advice from Facebook friends comes to the rescue again.  I set up an eFax # so that permits can be sent to us via fax, but we'll receive them as an email.  Very cool!  There was even a Free offer going on that waived the activation fee!  I quickly set up our fax number and we're set!  I had to enter credit card information, but it won't be charged unless we go past the free trial month without canceling the subscription.

The Next Week and a half... Long (and exhaustingly frustrating) story short... I sent half a dozen emails (unanswered) and made half a dozen attempts to send a faxed letter.  No faxes went through as the number went unanswered, day and night... no answer.

I made several more attempts at phone contact over the next two days which resulted in "disconnected" calls.  Seriously!! They're hanging UP on me!!!  What do I DO!?  I'm becoming desperate!  I've gotta get a grip!

So, I calm down and think about it philosophically... Maybe this is a lesson in "Island Time".  Maybe they are so "chill" over there, they can't deal with people like me who want I's dotted and T's crossed... like YESterday!  So, they're not really punishing me... no, they are teaching me a lesson.  I should learn from this, come at it from a different angle, be resourceful...  not slit my WRISTS!!!!

February 8:  The problem is the vaccinations.  They have to be a month in advance of entry, so it's time to get them.  But the secretary at the Vet's office said they couldn't complete the health attestation form without the permit number.  I made the appointment anyway and took my forms to the Vet, along with one of the permits we HAVE received, so that she could see the requirements, and so attest that we had received these vaccines.


The Vet was very nice, and completed the forms after making sure we had all the required vaccines and exams.  Cha Ching!  So I feel a little better now.  At least THAT is out of the way and we won't have to scramble to find a vet and transport the cats by dinghy and public bus...  Relief!

February 10th:  So now, how to get those permits?  I sent out the missing three applications again by Priority Mail, with a letter (and a little "something extra") requesting that they re-fax these three as we only received the other three... and we wait...

The End:  Saturday February 22nd:  Before the last Priority Mail I sent has even had a chance to arrive in the Bahamas... My daughter called me to say that the Pet Permits have been mailed to our home... In Texas...  So, she packed them up and sent them (along with other things) to us via Fed Ex for another $36 so that we wouldn't have to delay our departure from Sarasota.

I was able to cancel the e-Fax account before any charges were applied, so THAT was free.  The whole thing cost us $77 plus the cost of Fed Ex to us and the vet bill... which don't really count.