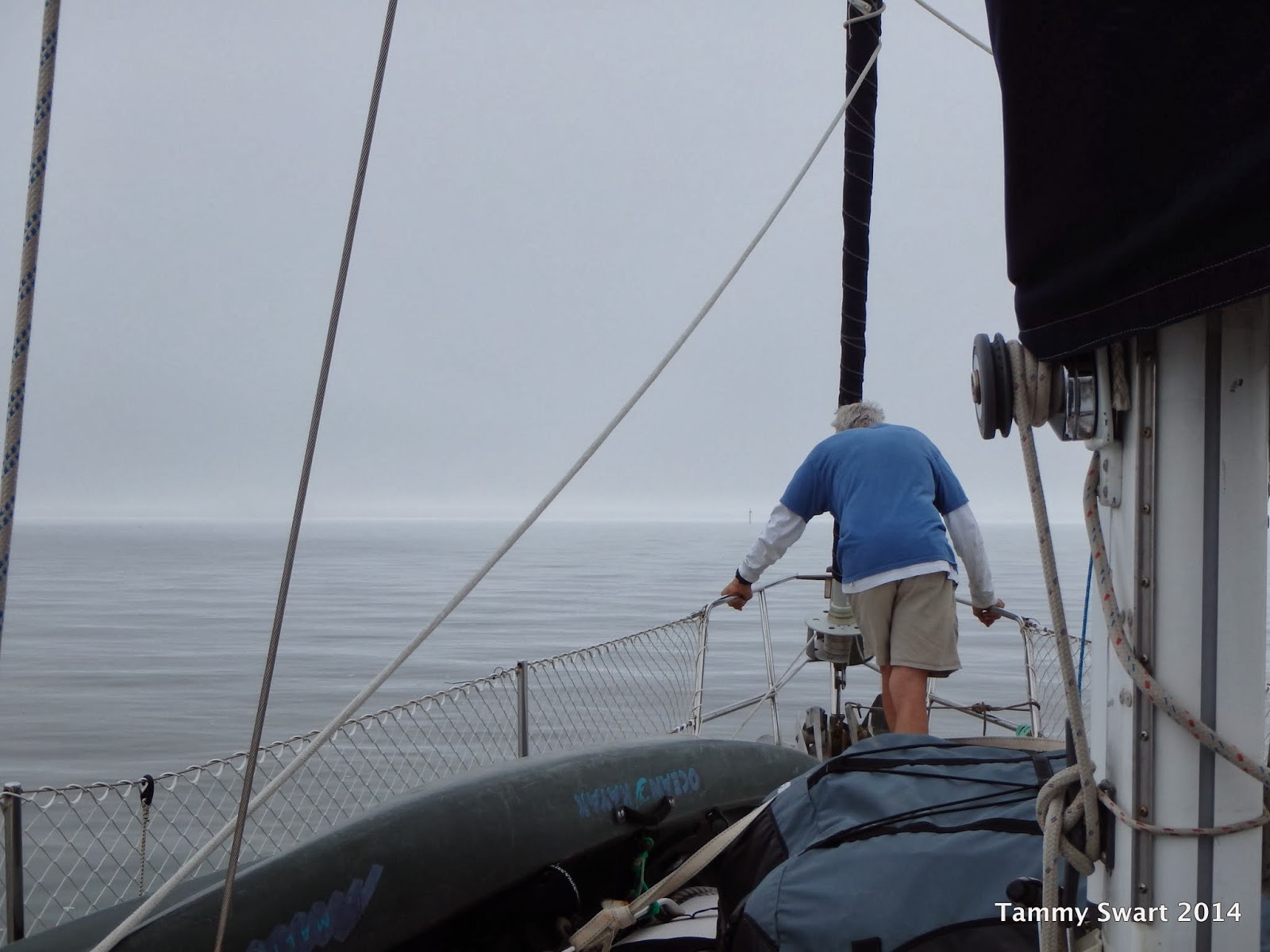 Our next anchorage was North Longboat Key.  Our first choice today was again, Egmont Key, but once we left the Manatee River (sans Manatees I might add…) and headed out onto South Tampa Bay, the dense fog convinced me that continuing out to the small barrier island, no matter how badly I wanted to see it... would be foolish.  We could hear ships sounding their fog horns and we could NOT see the flashing of the lighthouse from the North tip of Egmont Key… So, another lesson in not-getting-my-way was forced upon me… but I quickly perked up about our secondary choice… Longboat Key. 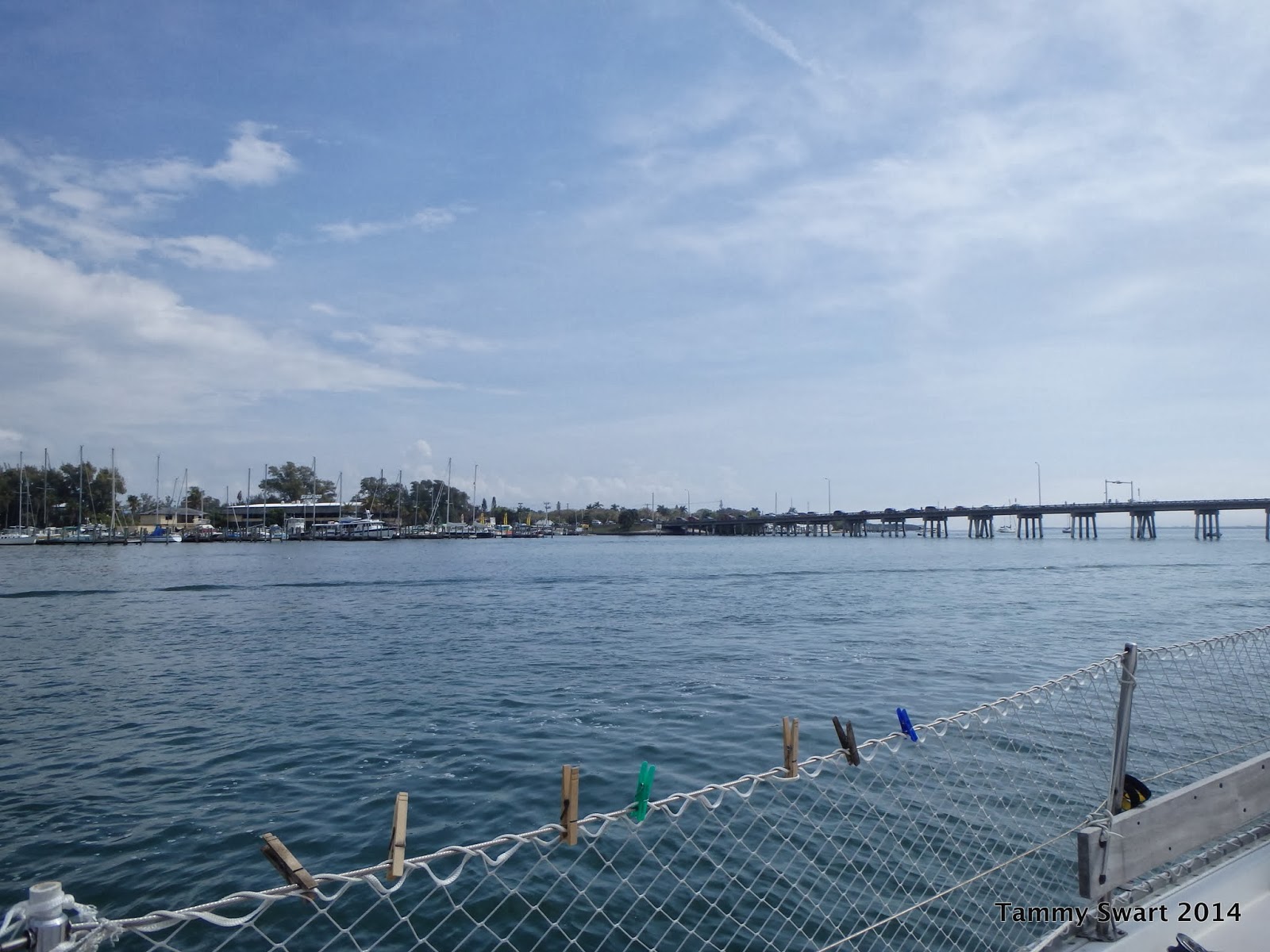 We felt our way across the bottom of Tampa Bay in the fog using our radar and Bruce on the bow.  After an eternity, we entered the ICW, still in fog, although not as thick.  We soon began to be able to see the channel markers at about 1/4 mile distance, and once we got well out of the Bay, the fog lifted almost completely.  We had some sunshine and warm, almost hot temps (not complaining) to see us to our anchorage.  The waters were beautiful deep green and conditions were benign.  It was shaping up to be a gorgeous day!


The reviews for Longboat Key in Active Captain were great, although it did mention that this was a popular weekend spot for the locals… Somehow we ended up here on a weekend, thinking that if we arrived early, we would have no trouble finding a spot.  Boy, were we wrong!  Our arrival at Longboat Key provided us with our first experience trying to navigate a crowded, unknown anchorage.  I’ve read so much about cruising, that I’m very conscious of not being “that cruiser” who blows into the anchorage and picks a spot with total disregard to those already anchored there…  I don’t want to put anybody on the defensive and I want to find a safe spot for us. 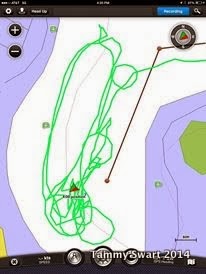 So… around and around and around we go, again.  The depths were fine, but for some reason, we just could NOT get our 55 lb. Delta to stick.  We have only had trouble once before, and it was our fault for not backing down to secure the set.  I wasn’t making that mistake again… but evidently, I was making a new one! 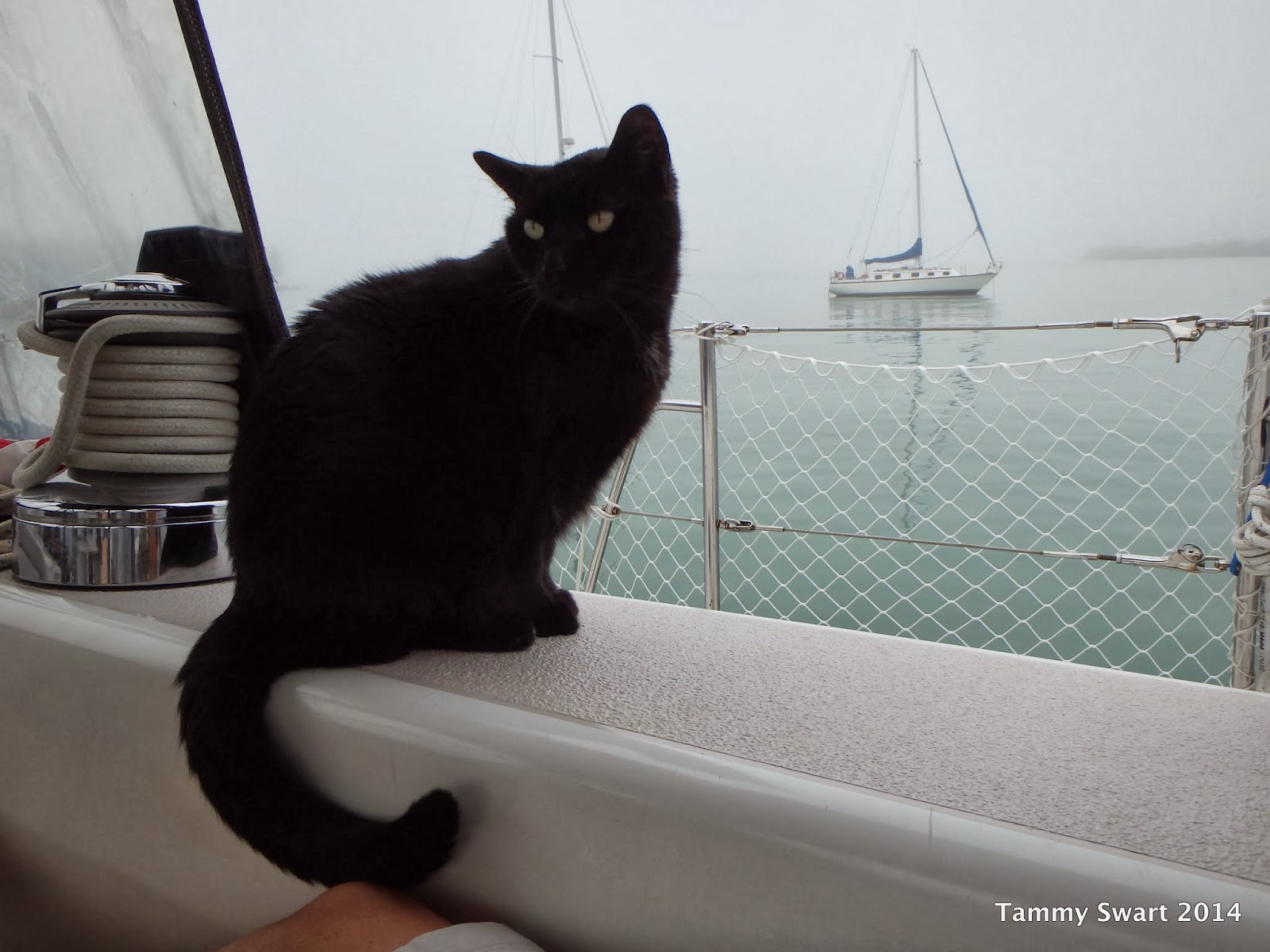 After moving multiple times, we switched to our secondary anchor, a 35 lb. CQR.  We got it to stick, but then feeling uneasy with where we were in relation to the other boats in the field, we moved again.  I lost count after our sixth attempt… We finally ended up in our original spot, with a tenuous hold on the bottom using our primary anchor.  Bruce was wiped out, so we retired on the aft deck for sundowners… even though the dense fog that had plagued most of our day was rapidly returning.

I tried to go over the day’s events in my mind.  What could I have done differently?  How did we go wrong?  How can we keep this from happen again.  As usual… all answers can be found from friends on our Facebook Page.  After relating our anchoring woes on our page, this advice floated to the surface of the thread, to be revered and remembered for hereafter in our minds:  From Judy on S/V Bebe 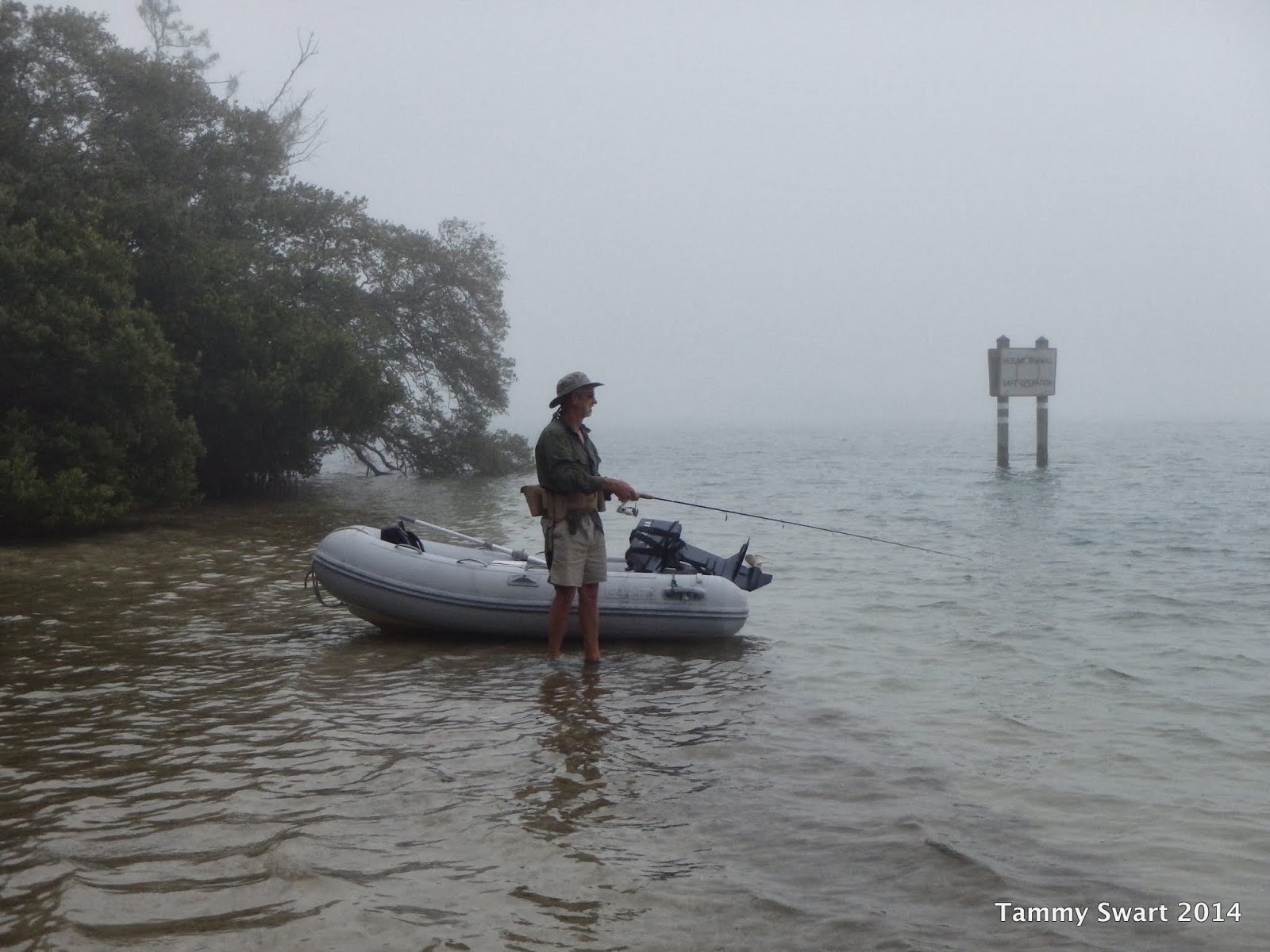 With the predicted winds to be nil, we felt secure with our set and got up the next day ready to leave the boat and go exploring a bit.  The fog lingered all morning, but we took advantage of a small window to try and catch some fish.  Bruce has had very little chance to fish since we got his fishing license, back in Pensacola…  I just love dinghying around any time… so we parked it off of Jewfish Key and I walked the shallows while Bruce threw a lure. 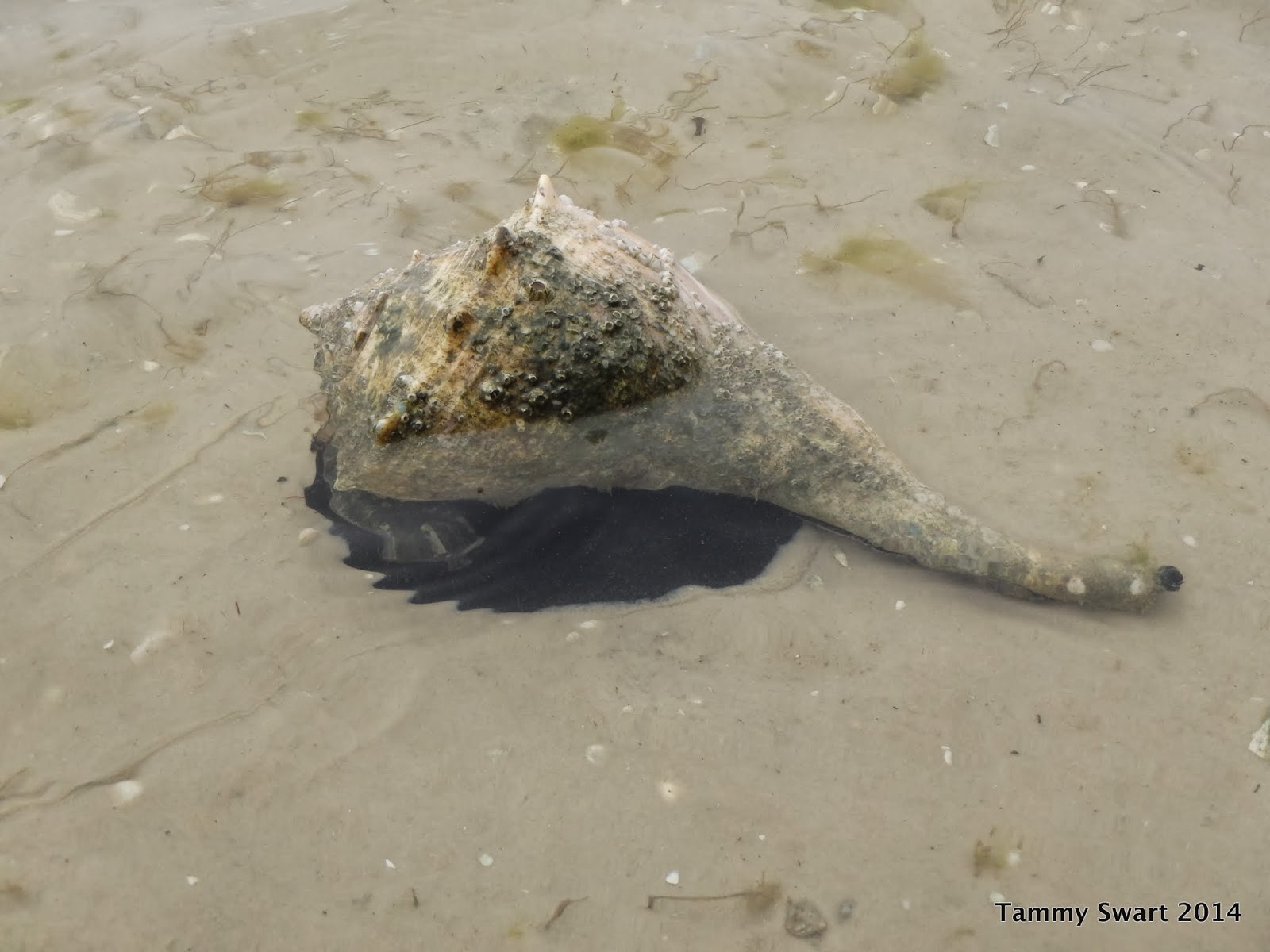 I found two giant shells, which I later determined to be Lightning Whelk.  I’ve seen this type of shell before back home, but much smaller and full of hermit crabs.  This big black (and edible?) beast seemed unafraid as I approached.  I left them alone, but watched and took some pictures. 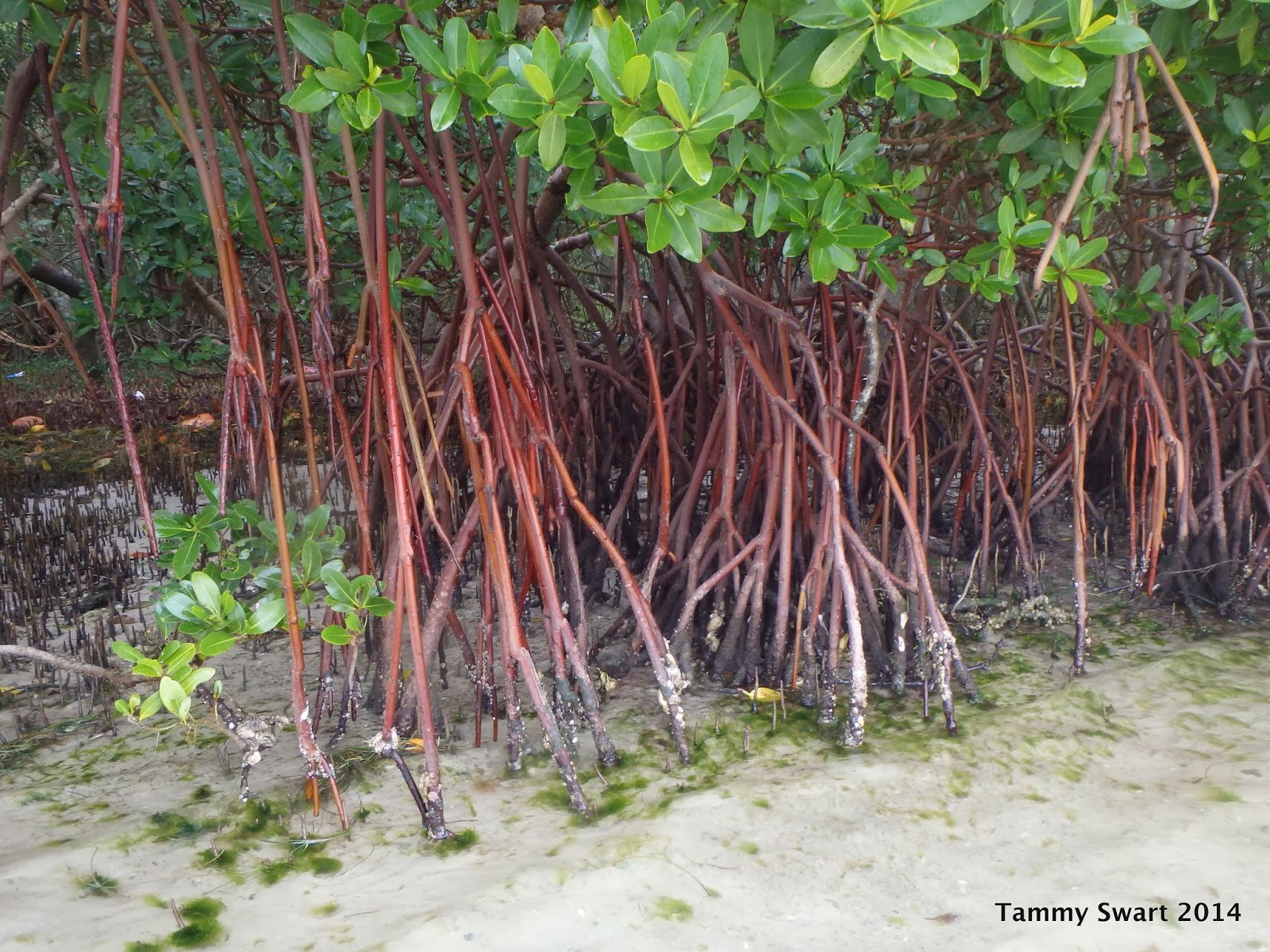 I peered into the shoreside mangroves until I got freaked out remembering that little black bush-crawling snake on DeSoto point… So we moved to try another fishing spot around the bend. 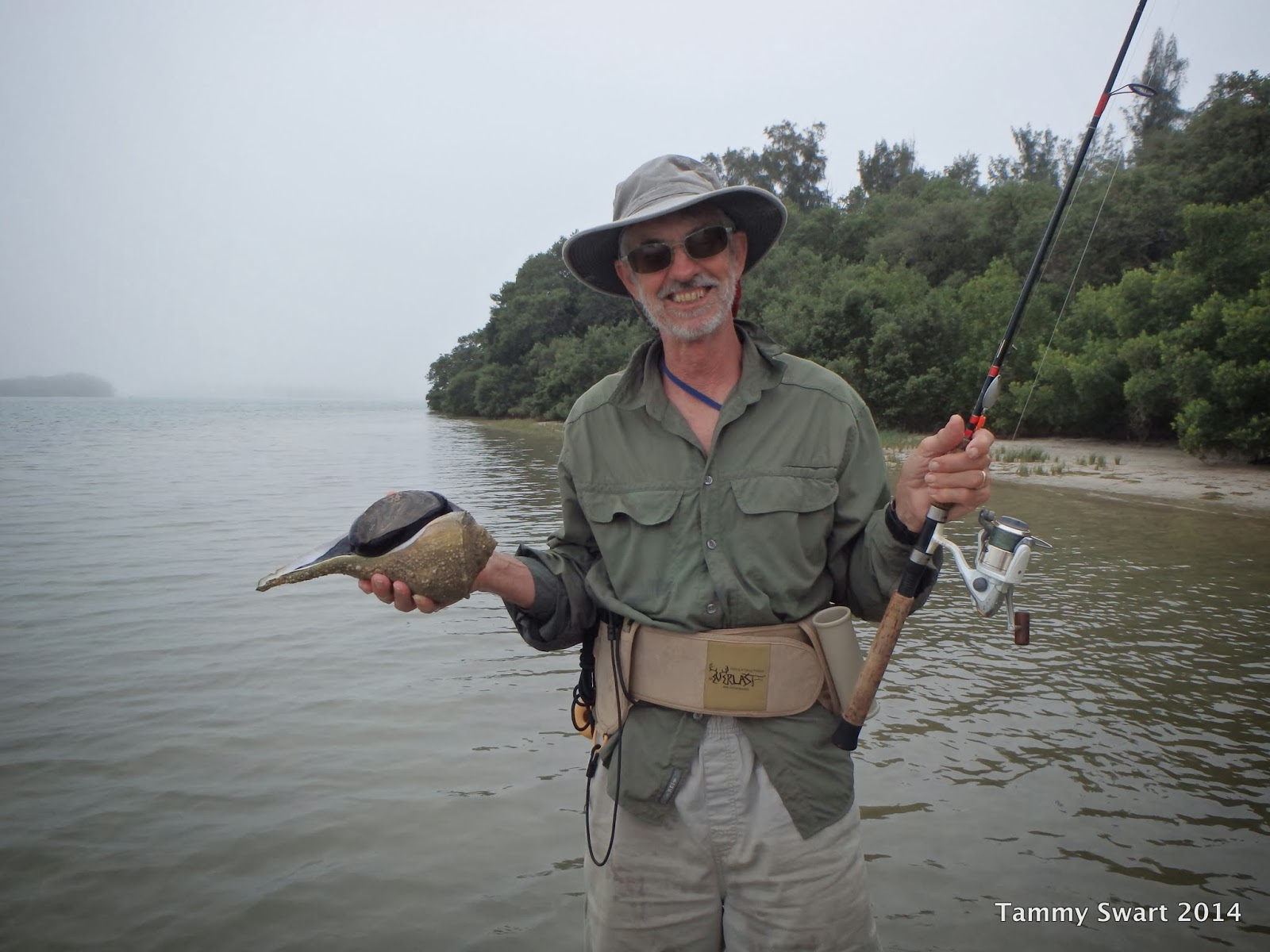 Still no fish, but Bruce found a third Whelk and brought it over to show me.  So, I did get to touch the slimy but strangely firm body of this snail… yuck.  We set the Whelk free and made a mad dash back to the boat as the fog had once again thickened to the point that we couldn’t see much in front of us.


After lunch and a short nap (cruisers get to take naps), we took the dinghy out for another spin.  We wanted to see what was around the corner and how Longboat Pass looked today.

There is a huge sandbar where the local power boaters bring their families to spend the day frolicking in the clear waters.  There were dozens of boats there and the people looked like they were having such a good time. Florida must be just a wonderful place to grow up for boating families!   But I had to wonder... without holding tanks... where they were all using the restroom?… 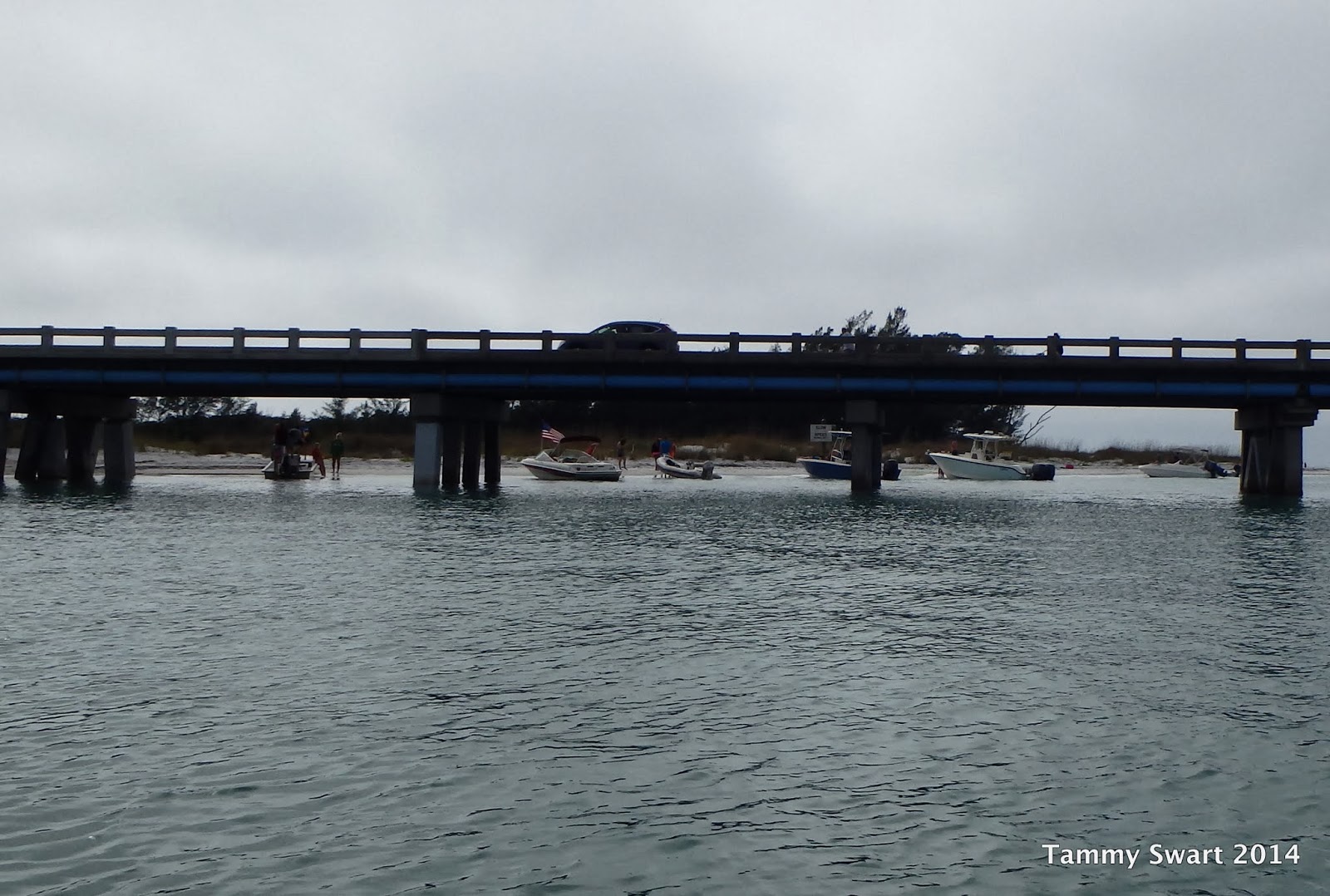 We found scads of locals beached along the shores of Longboat Key.  Fishing, swimming, generally enjoying this first warm day in a long time.  I found myself wishing that it was a week day…  More and more, I have begun avoiding masses of people, especially on the beach.  I long for Monday, just as much as I once longed for Friday…  perspectives change.


We took a short jaunt outside the mouth of the pass, ducking below the bridge with a weak incoming tide ensuring that we would have no trouble making it back into the pass… 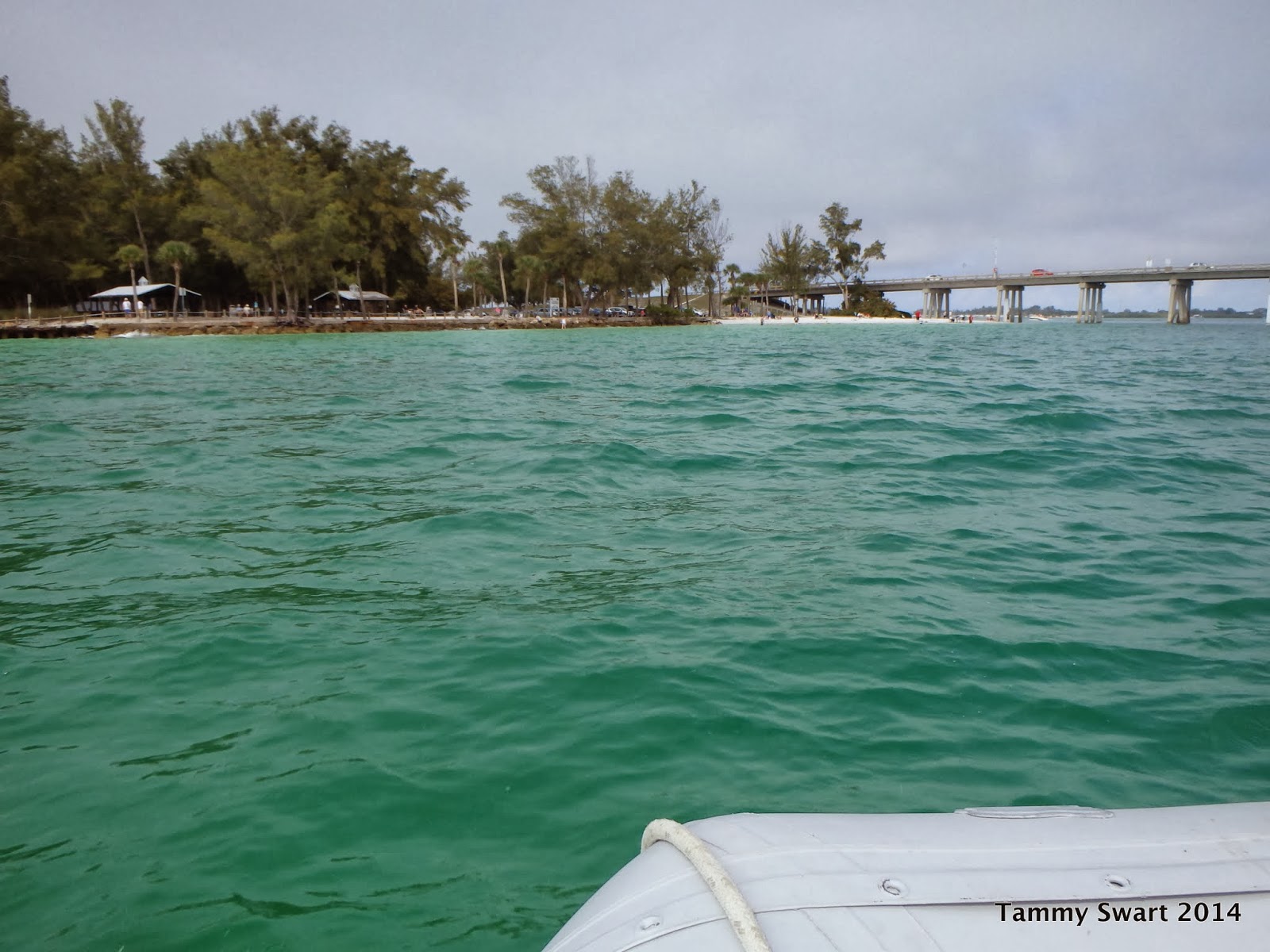 The beach was still covered with people, so we finished off our tour and headed for shore.  We dropped off our trash and walked through this very inviting little town.


We had been told that there were wild peacocks living here, and we didn’t have to walk long before we found them.  There were three peahens crossing the road coming over to our side.  While I was busily snapping pictures...


Bruce spotted the object of their desires, a gorgeous male with full plumage sitting on the tree branch above our heads.  He seemed nervous that we were getting too close to his women, and on the verge of jumping down… so we moved on, not wanting to disturb him. 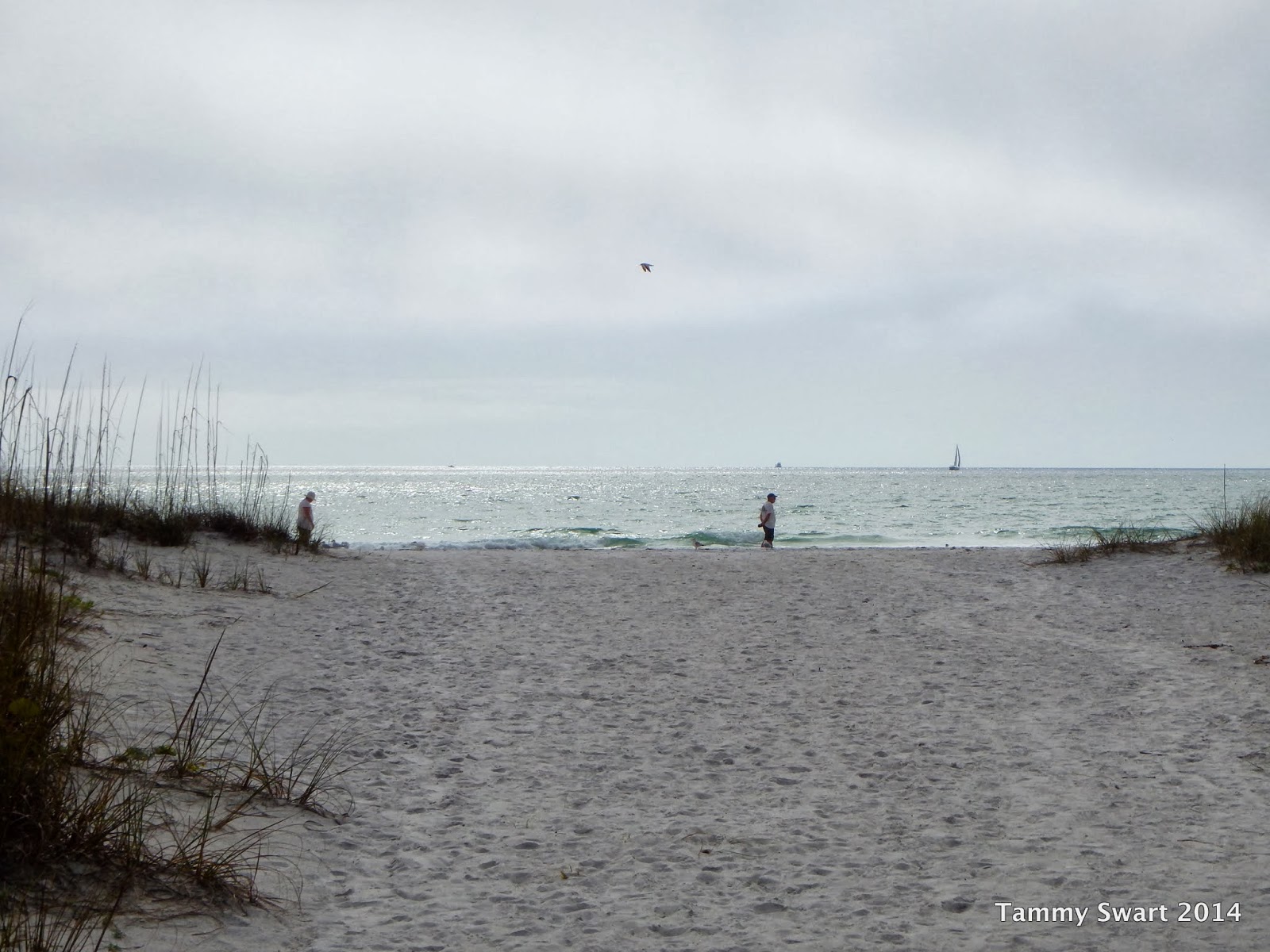 We quickly found the beach access, nice again, as we are coming to expect of Florida.  The beautiful white sands beyond beckoned and we were drawn to the water’s edge for a stroll. 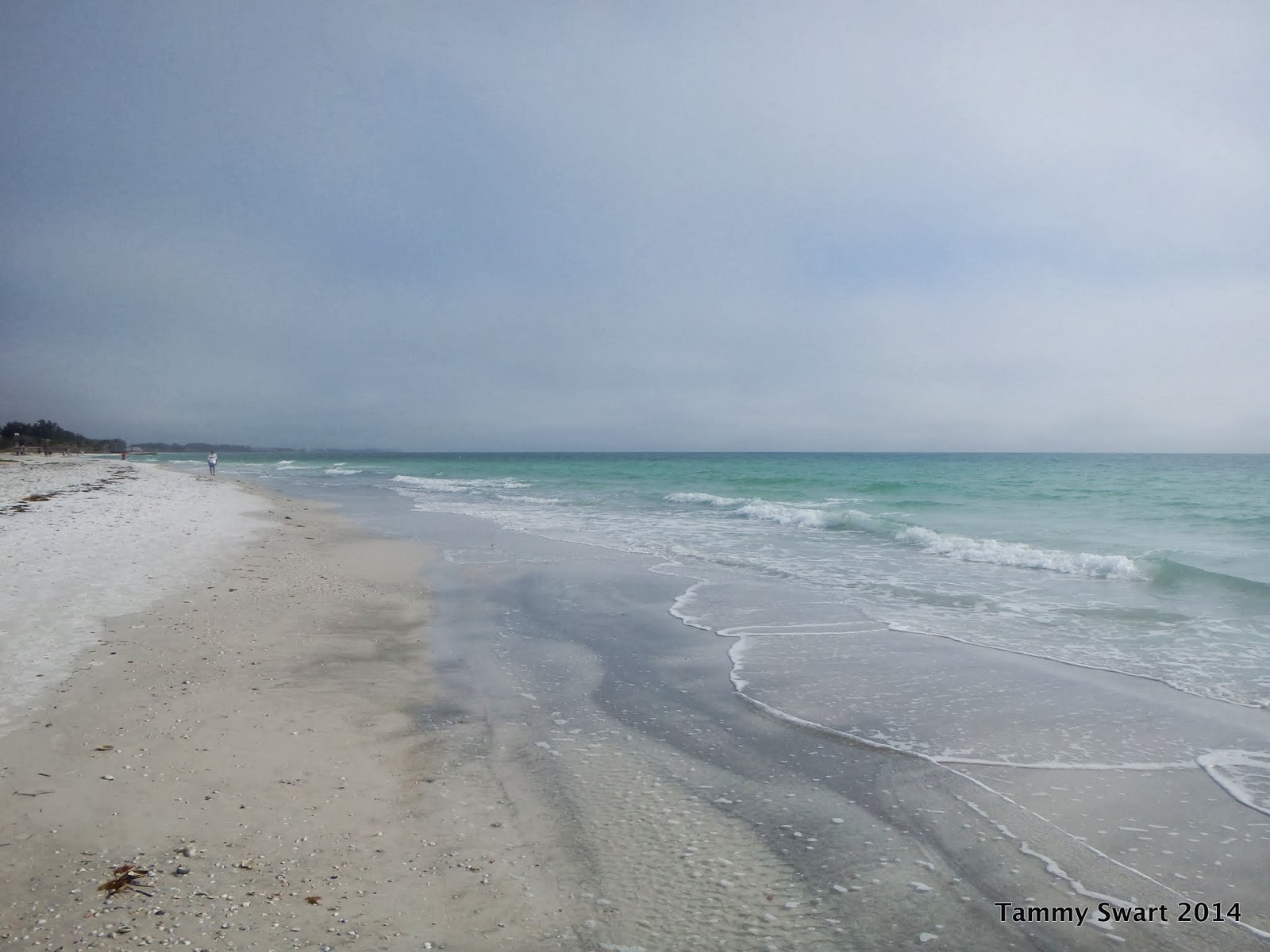 I even took my shirt off and walked in my shorts and swimsuit top to begin the process of banishing my pasty whiteness left by this cold winter.  It felt really good. 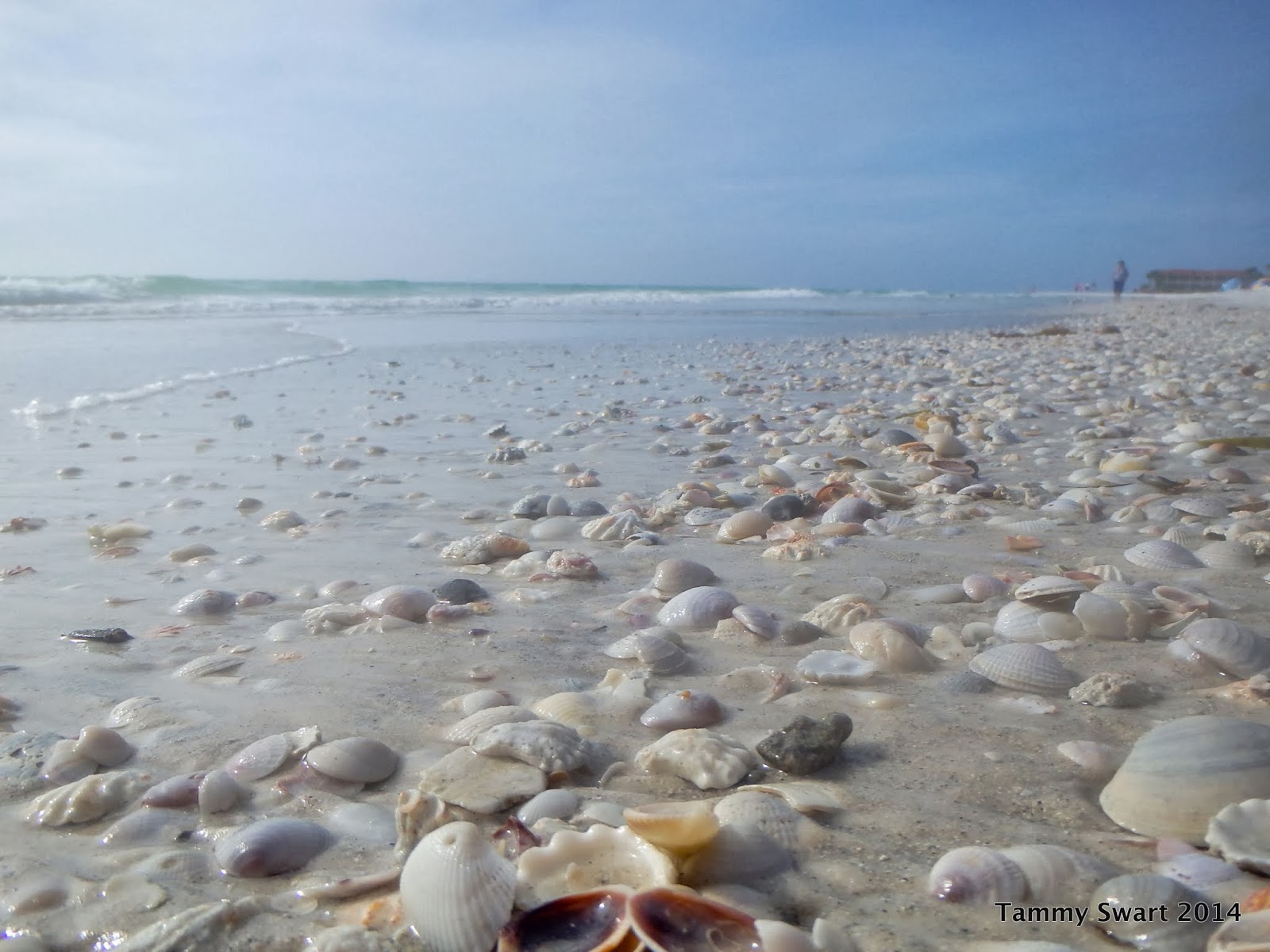 I found a sand dollar and picked it up.  But, there is no need for sand dollars on the boat, so I gave it to a passing woman. 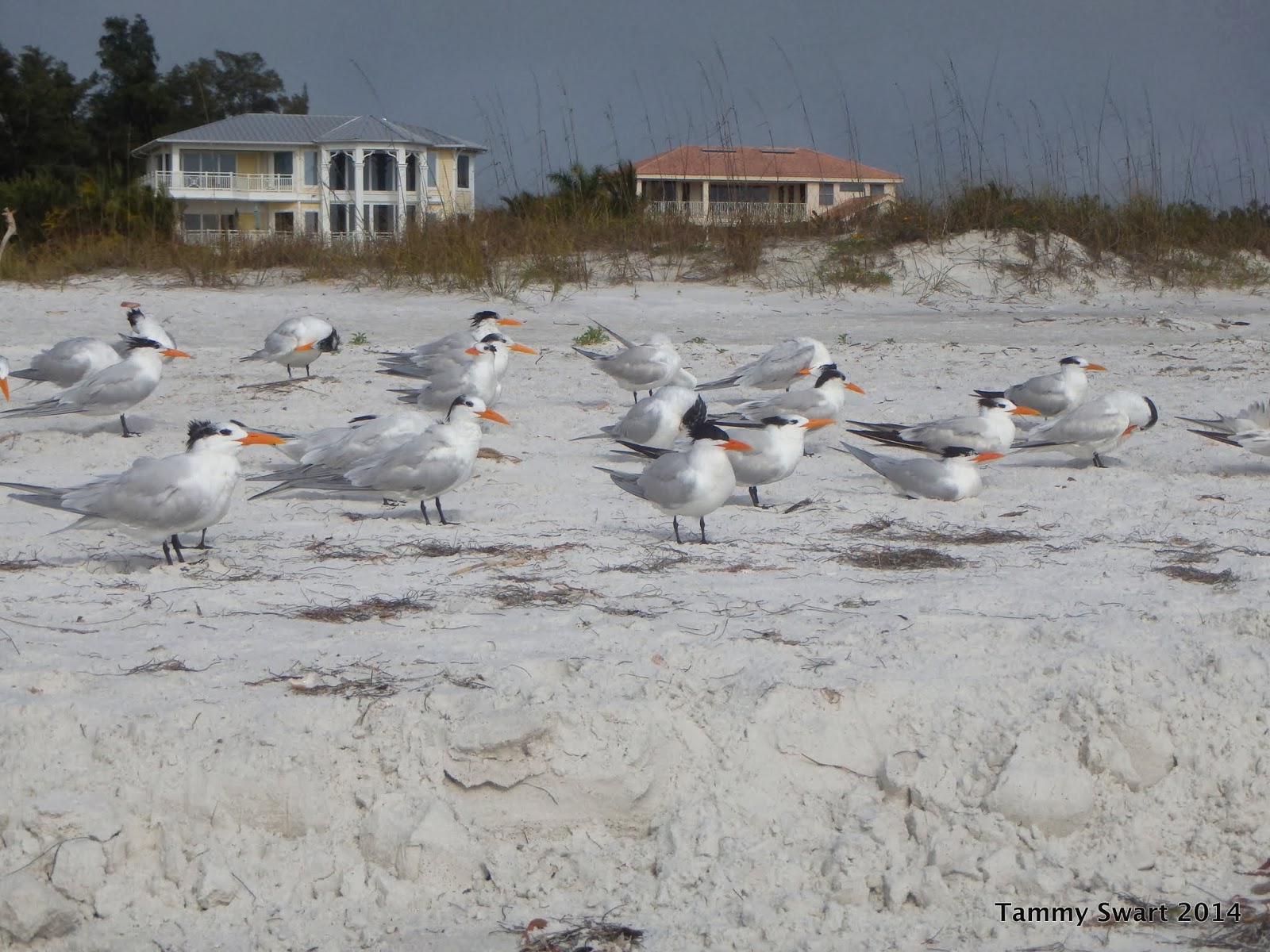 I am continually amazed by the lack of fear shown by the birds on the beaches in Florida.  They showed no concern as I crept closer for a good shot. 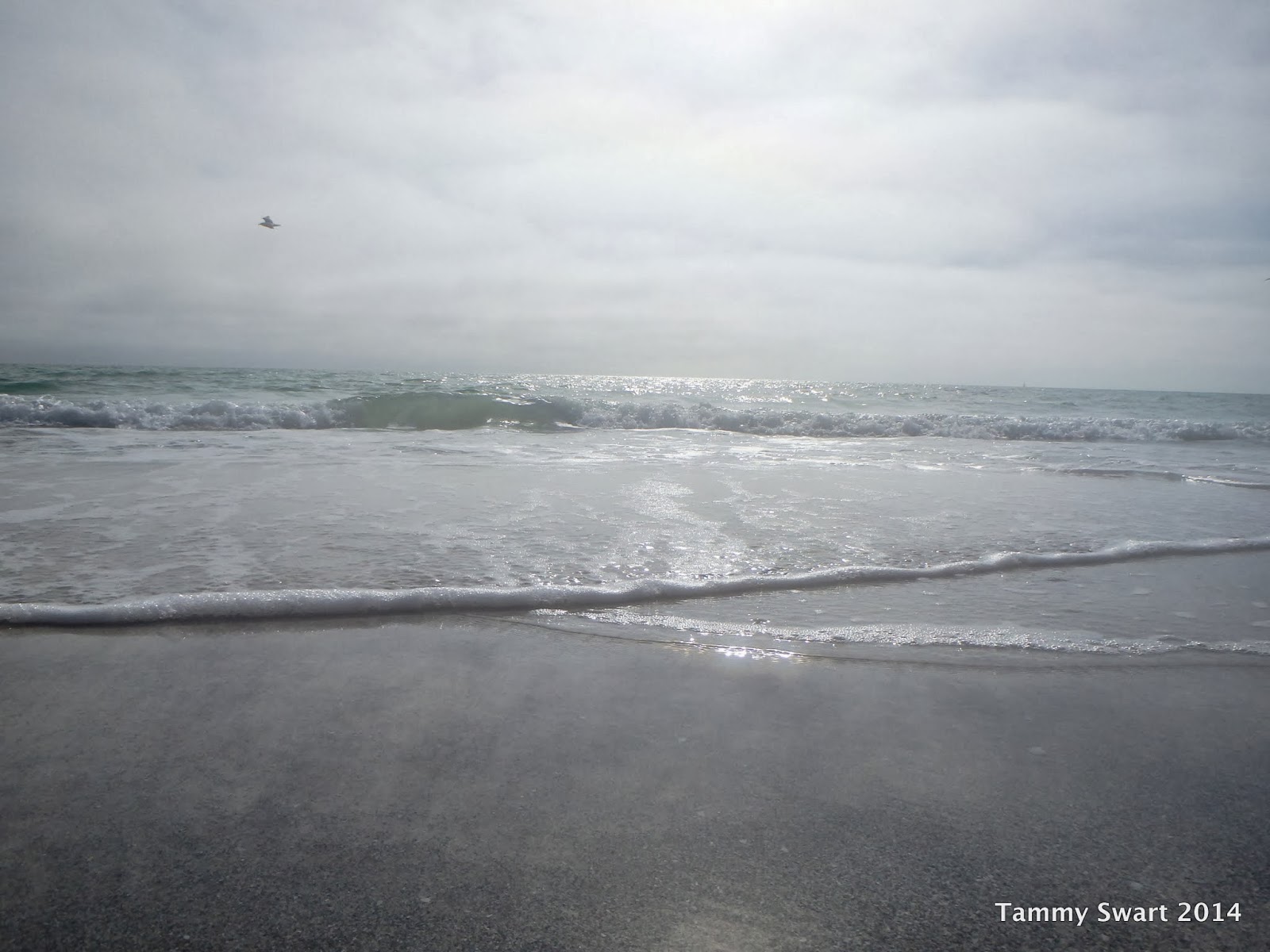 The water was clear and clean and once again, I wished it were just a wee bit warmer… We could have walked that beach forever… but instead, turned back and found our way back to the dinghy.  We considered stopping at the waterfront restaurant, but giving their menu a once over… we found nothing to entice us, so we moved our party back to the boat.

We anticipated increased winds overnight and both of us were a little worried, although we didn’t voice our concerns.  We noted our position again and again while sitting on the deck enjoying the rolling fog, until its gentle tendrils gave us a chill.

We were early to bed and early to rise… although not of our own doing.  I heard the wind pick up at about 3 am.  The water slapping the dinghy’s hard bottom alerted me and soon the boat began to rock.  Sleeping was officially over.  Bruce went up and took a look around, surely that boat is closer…  I joined him and we both kept watch for about half an hour.  Yes, it’s getting closer.  We’ve got to move.

The boat on our starboard side was alive as well.  They pulled in some scope and called it good.  I’m not sure how that works… but they didn’t have another boat behind them.  The wind had turned so that the boat that had been slightly to our starboard, was now directly behind.  And it wasn’t swinging.

We started the engine and Bruce pulled in the anchor.  Once up, we both looked at each other…  Where should we go.  It’s still dark, but there is enough ambient light for us to see the other boats in the anchorage.  I began to slowly make our way to the back of the pack.

Yesterday, there was a boat here, but it’s gone now.  I took their spot and Bruce dropped the anchor gently.  We had Judy’s advice in mind as we let the boat settle… it was too early for a beer.  So once we began to swing normally, Bruce let out a bit more scope.  Then we settled.  Once again, more scope and we settle.  After a bit, I backed oh-so-gently and called it a night.

I left Bruce in the cockpit on watch while I and the kitties went back to bed.  I felt secure in our new spot and there were no boats behind us.  Once daylight arrived, I got up and we saw no reason not to hit the road.

I consulted the charts and found that we had an easy hop after a little shallow stretch, but the tide was rising, so I wasn’t too worried.  We made it past the hump and out across Sarasota Bay.  Our next destination - Marina Jack’s Mooring Field, downtown Sarasota.  It will be nice to be on the mooring ball for a few days.