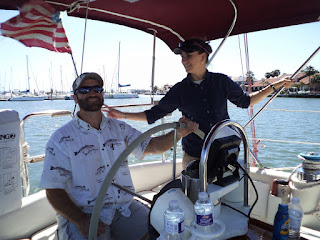 Since our boat sold, Bruce and I have found ourselves with more free time than that to which we are normally accustomed.  Part of our Master Plan included cutting out many of the encumbrances on our time, I'm not Bowsprit Editor, Bruce is no longer on the Board of Governors for our Townhome community... etc.  This left us time to do the fun things!  But now... no boat... not enough fun things to fill the void.  Now keep in mind, all of that is about to change.

But for the past several weekends, we have found ourselves rattling around with nothing to do and noplace to go.  We are just not used to that and it feels wrong!


But this weekend, Chris and Sarah, the young couple who bought our boat, took us out sailing.  It was a glorious perfect sailing day and it felt so good to be out on the water.  Chris and Sarah are good company too.


I've often marveled at people who can just take some lessons and then buy a boat and sail away.  Well, they aren't sailing away just yet (although they ask us questions like "could this boat take us to the BVI's?)... but obviously they're thinking about it.  Knowing them, we get to watch this process first hand.  Chris took the lessons and has been reading and studying up about sailing.  Now he's bitten off quite an impressive vessel for his first boat.  Lucky for him, we are still around to take him from theory to practice. 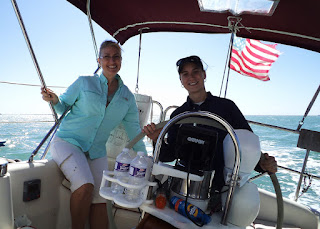 And that is just what we did today.  Sarah has absolutely no sailing experience and has now become a full time liveaboard.  She, along with their cat Lucy, complete this trio and it's going to be a steep learning curve for them all.  Chris took Sarah (and Lucy) out sailing in the Gulf last week and it was probably a mistake on his part.  The winds weren't bad but they had been and there were confused seas making the experience an unpleasant one for Sarah.  I think Chris learned his lesson however, and will try not to repeat it.


Today was a 180 degree turn from that experience for Sarah.  She was able to take short periods of time on the helm while Bruce went through some of the boatwork with Chris.  I stayed beside her and talked her through it all, explaining what to do, what to expect, and why we did what we did.  She is a quick learner and already feels better about the whole thing.  I think she's going to be a natural.


We had a bit of an "event" while heading back to the slip.  We went out into the Bay, which was quite benign.  Chris was at the helm as we approached the entrance to the Ship Channel, we pointed him in the right direction, told him what he was looking for and let him go.  When he got too close to the shallows, Bruce sprung into action.  We needed to be downwind several boatlengths to enter at marker 43 and we were missing it. 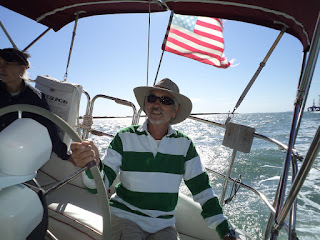 Bruce pointed Chris in the right direction while he and I took care of the sails.  Chris did an accidental jibe, which I saw coming but said nothing.  I thought it wasn't going to be too bad, so I took the mainsheet in as it began and no sweat.  We trimmed the jib and settled down for the short downwind run.  Then we trimmed sails as Chris eased us around Marker 43 and we were set.


One look at Chris and Sarah and we started to laugh.  They both looked as if we'd had a near death experience.  It really wasn't that bad...  just a flurry of activity.  As we talked through it and explained what had happened, I think they both had a realization of just how much they had to learn.  But from my perspective, it was a good thing to have an "event" and get through it.  Lessons learned:  Watch where you're going, have the boat ready for action, and accidental gibes aren't a death sentence. 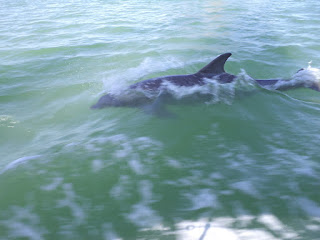 The rest of the sail was pleasant and uneventful.  We had dolphins at our side most of the way.  We talked Chris through his nervousness about how and when to drop the sails and prepare to go into Piper Channel.  We got it done while he was at the helm.  Next time, I'll talk Sarah through it while Chris does the work.  He still took the channel at a faster rate than we would have.  We still have that residual distrust of the channel depths from the old days.


We ended up having dinner with Chris and Sarah at the Cancun, our favorite Mexican food place.  The day was a much needed sailing fix for us both.