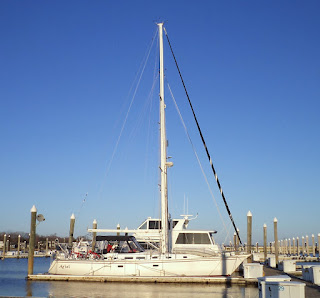 After a long day flying from Corpus Christi to Rhode Island, Bruce picked me up from the T.F. Green Airport in Warwick...  I was tired, I was hungry and it was COLD!  Well maybe not by local standards, but by MY standards...  But, I had seen our boat lying snugly in her slip when the airplane flew over the marina.  That was VERY exciting!

My first impression of our new boat was a positive one.  I looked over the outside and found it covered in a fine layer of dirt, but when I looked closely, it was better than I could have hoped for.  The deck was in great condition and all of the stainless was much heavier than that of our old boat and very shiny!

I was a little taken aback by the "boat smell" when I went below.  The cozy cockpit with full enclosure was nice, but there was a very strong scent inside that I knew would have to be dealt with... and soon!

Bruce had the boat in order.  Things looked good, and he had clean sheets on the aft queen bed that soon called my name.  We had dinner right up the road from the marina and called it a night.

Things looked very much better in the morning.  The boat was lit up by the growing dawn light streaming through the numerous ports.  Ahhhh.  Happiness! 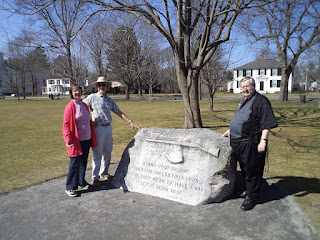 We spent Sunday with Bruce's Sister, Anita and her husband Vince.  They took the day to show us around some of the Boston area attractions. 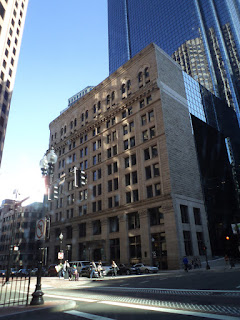 I was excited to get to see Boston.  It was different from my preconceived mental version, but it was great.  Tall buildings old mixed with new. 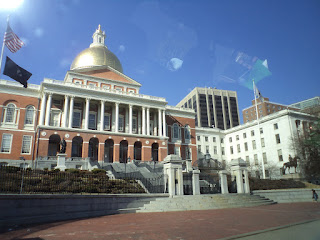 More old than new, which I always enjoy.  It fascinates me to think of these buildings standing through the years, ever unchanged... 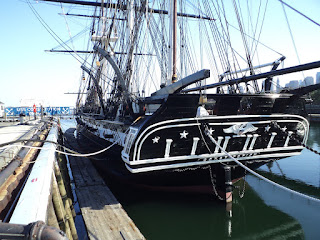 We arrived fifteen minutes too late to board the USS Constitution.  I was so disappointed but Vinnie cheered me up with a delicious Italian Dinner that was to-die-for.  We lingered over dinner and caught up on family news. 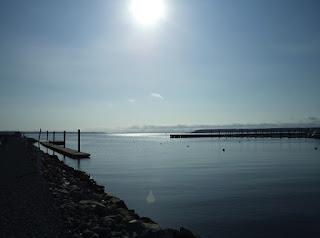 We said our goodbyes and returned to Greenwich Bay Marina where our boat  temporarily lives.  The boat was toasty warm and we crawled into our bed exhausted after a long day.  The next morning, we took a walk around so that Bruce could show me all the sights.  The fogs in the morning were very strange, they seemed to be in patches that never spread out to cover our area. 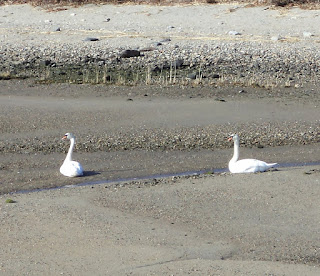 There were a couple of swans living in the marina.  I never seemed to have a camera handy when we saw them in the water but I did wake them from their nap one morning. 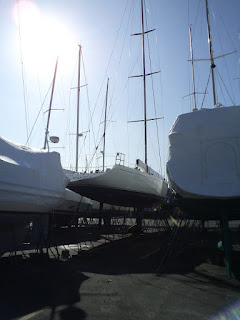 We had to walk over to where the sailboats were stored on the hard to reach our designated trash dumpster.  It was cool walking around amongst these big beauties. 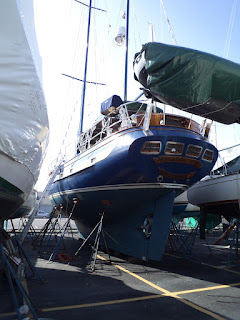 I never knew there were so many different types of keel. 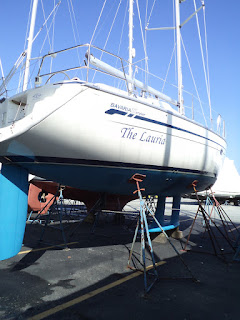 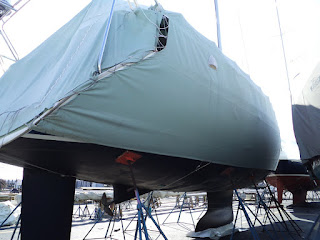 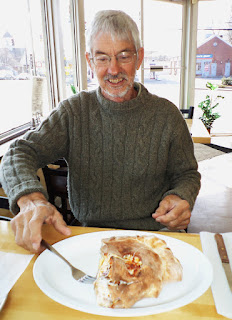 We sampled the local fare for breakfast... no taquitos here.  We had a fabulous Calzone!  I could make this!  We did some shopping, picked up some cleaning supplies and went to work.  We had a mountain of laundry to do with all of the sheets and towels that came with the boat.  There are sets of sheets and down comforters with duvets cut to fit the beds on the boat.  All of these had to be defunked.  Even though they were stored inside sealed zip bags, the musty smell did its work on them.

It was difficult to know where to start.  I explored the galley and found it to be quite comfortable.  The refrigeration is in need of repair, so we contacted a couple of different contractors who both advised that we replace the old Adler Barbour unit with the much more efficient Sea Frost unit.  With everything we've heard and with our own experience with Adler Barbour, we decided to get this done prior to bringing the boat home. 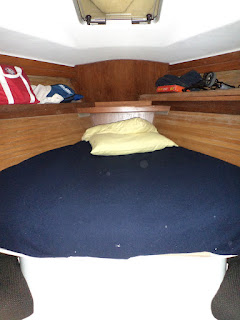 The next three days were a whirl of organizing, cleaning, discovery and pure joy.  Bruce kept uncovering things that reinforced our opinion that we had the right boat for us.  The previous owners had spares of everything.  This alone will save us so much money in the long run and will get us far down the road to cruising.
We had another workman come out to take a look at a water leak.  It was thought to be a problem with the recommissioning after the boat being winterized.  It turned out to be something else and not only one problem, but a combination of three.  All was well in the end and we learned a lot about the boat in the process.  I took some pics but they are in the camera that stayed in RI. 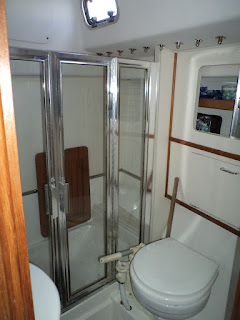 My last full day in Rhode Island, I tackled the aft head.  I spent several hours closed up in there with bleach water eradicating the mildew that covered every surface. 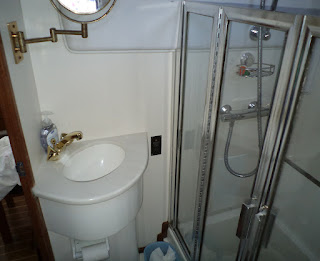 One open port kept me from being overcome by fumes.  When I was done, the place shone and sparkled with clean.  It's going to be a great "bathroom". 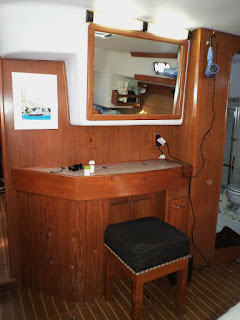 I must have been impaired somewhat by fumes, because when I was putting things away and moving things from the vanity to the bathroom cabinet, I slammed my left hand middle finger in the vanity top and that put an end to any more cleaning. 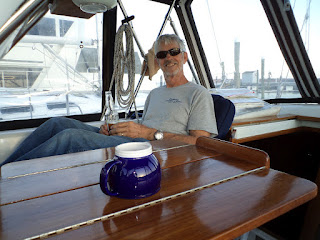 After that it was all downhill.  I had to leave the next day, it was my last evening with Bruce until I see him down South, and I was wounded without being able to nearly finish what I had planned to do on the boat.  Coffee that morning was a somber event.  When I left Bruce there I really wanted to cry.
But... I was secure in the knowledge that we are going to LOVE THIS BOAT!  My fear was that it wouldn't be "the one".  We took a big risk in not seeing it for ourselves before buying it.  But, we put our trust in Chuck to make sure there wasn't anything really wrong with the boat... the rest was just personal comfort.  This boat has everything we wanted.  I don't think there are many boats out there for a price we could afford, that would be as perfect for us as this one.  I can hardly wait until I see her sitting in the Port A Marina.  This summer will be such fun!
﻿