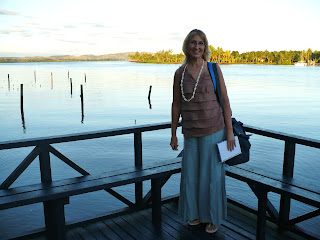 My Firstborn is working as a Teacher in San Antonio.  She spends part of her summers chaperoning      small groups of her students on trips to foreign countries.  This summer she picked the South Pacific as her destination and she invited me to go along.  Now this sort of structured travel is not usually our thing, but when she got to the part about how I could go for half price... I reconsidered!  We left San Antonio on a Tuesday and embarked on a two week journey to 4 countries beginning with Fiji!  We touched down on the island of Viti-Levu at the Nadi Airport and began our adventure at the beautiful Sonaisali Resort. 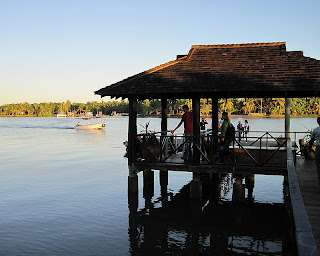 We crossed a lagoon on a small boat to our Resort home  and found ourselves in paradise.  Viti-Levu means Big Fiji.  There are 332 islands making up the Fijian islands.  The island we are on is one of the first in the world to see each new day.  We traveled a long time to get here and it's difficult to keep up with what day it is here, not to mention what day it is back home.  We lost Wednesday when we crossed the international dateline, but we would be getting the day back on the way home. 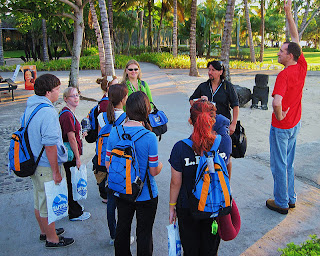 Our tour guide, Vic... cute Aussie guy with the most delicious accent, gathered us for a short get-to-know-ya in the courtyard. We would come to rely on this guy for everything.  He made the trip and I can't imagine looking back, that it would have been as great with any other tour guide. 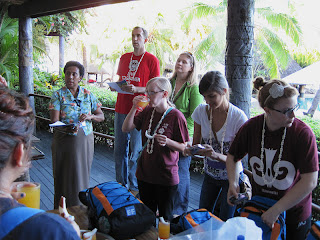 We were lead to a conference room to deposit our belongings then met up with our Fiji tour director, Lydia.  She gave us refreshing fruit drinks which would have been rum drinks had this not been a kid trip.  It was only 8 am so we couldn't check into our rooms yet.  We changed into beach attire and set out for the first excursion of our stay in Fiji, the Robinson Crusoe Island day trip. 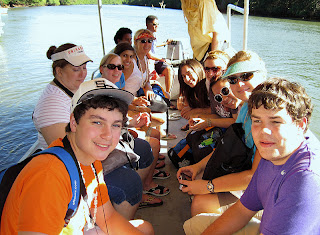 We were taken to a small dock on a river where we boarded another small boat that would take us down the river to the Island.  The river was murky and looked like a home to alligators, but Lydia told us there were none. 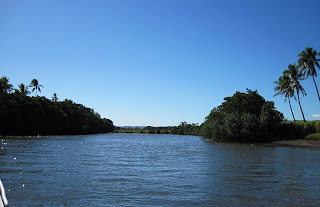 The scenery was beautiful and I felt like I was traveling downriver on the African Queen. 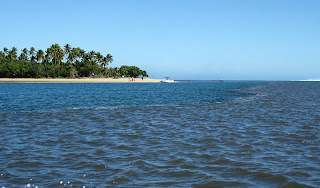 We neared the mouth of the freshwater river where it meets the saltwater of Viti-Levu's Coral Coast Reef.  You can see the abrupt change in the color of the water from murky to crystal blue.  The island of Likuri awaits surrounded by the serenity of a beautiful lagoon, while off in the distance (see right side of pic) the surf crashes on the reef sending up a white spray. 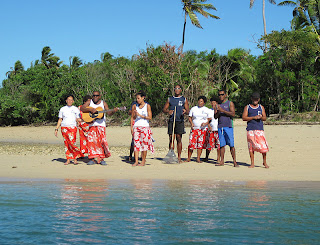 The Welcoming Committee beckons to us with song and helps to get our boat beached for our step off onto this island paradise. 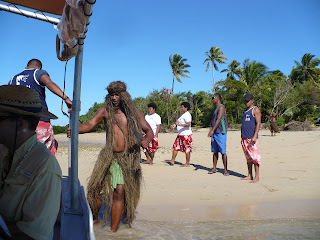 We are "attacked" by muscular natives bursting from the bushes and pushing past the Welcoming Committee to rush at us as we prepare to step off the boat.  No worries... they're friendly. 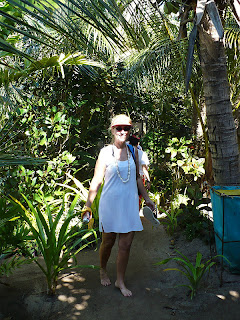 We followed a cool sandy pathway to the inner compound where we found the Chief awaiting our arrival. 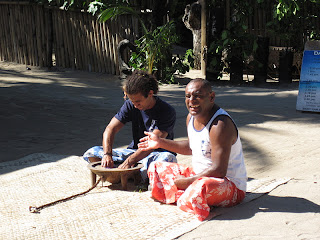 I had been reading about the traditional Kava ceremony on the Internet.  Some articles told of the old way of preparing the Kava where native girls would chew the root and spit it into the Kava bowl from which ceremony participants drink.  ICK!  I had my doubts.  But I guess modern times have (hopefully) curtailed this method and water is used to steep the root. 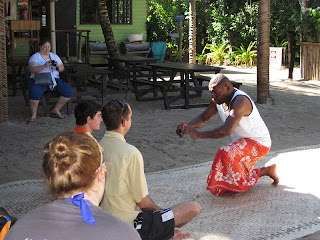 Our "Chief" was chosen, Fijian patriarchal society requires that it be a male, Michael was pushed forth dragging his junior "Spokesman" along with him.  The Island Chief performed the ceremony and Michael accepted the Kava clearing the way for the friendly welcome of our group to the island. 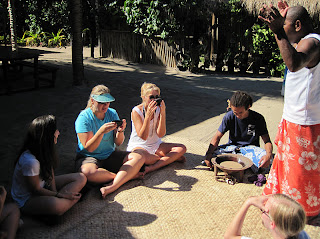 Kava was offered to each of us in turn.  Now Kava juice looks very much like muddy water.  Unfortunately it also tastes very much like muddy water.  It was difficult to drain the bowl and afterwards, my lips, tongue and throat felt a little tingly and numb.  Why this is desired escapes me but evidently if you drink enough of this stuff it provides some mildly "narcotic" effect.  I wasn't feeling it... 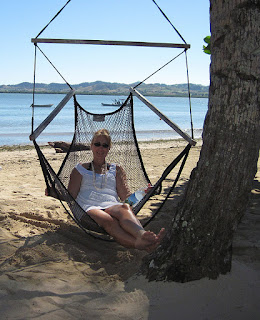 Once the official business was done, we had some free time on this island paradise.  Now remember... we've been travelling for hours and hours to get here and us old folks are feeling it.  I spent some time just hanging out in the sand soaking up rays while the younger crowd took advantage of the kayaks and other entertainments available. 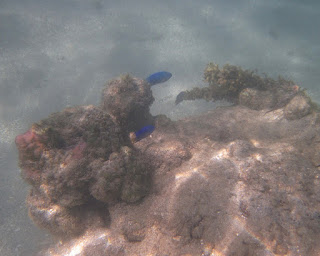 All too soon, it was time for a decision.  Continue drowsing or take a boat ride to the reef for some snorkeling.  Well I couldn't just let this chance pass us by so I rousted myself into the boat and set out. 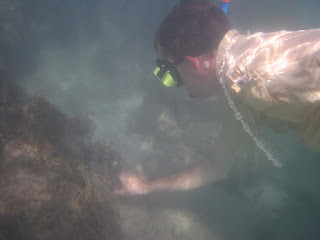 We were taken to a narrow passage between the island and the mainland for a drift dive.  The reef was too raucous today so we weren't taken out there.  Safety First, even in the islands.  There was quite a current ripping through this pass so we had to struggle if we wished to make a stop.  I spotted this cowry shell and Michael was on it! 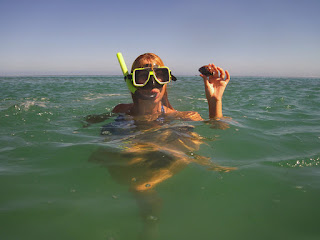 He brought it up for a look and of course, there was a critter inside.  That's the best part about snorkeling... I think many of the people in our group sped by and saw next to nothing.  You really have to hang back until the sand settles and just wait.  Things come out of hiding if you're patient.  I was lucky enough to see a small eel but when others came back to see it, the thing had disappeared making a liar out of me. 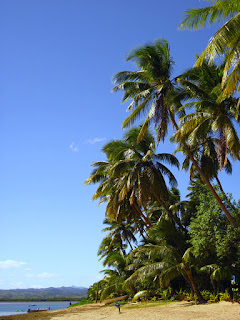 I brought up the rear and was nearly last to board our boat for the ride back to the beach.  It was a chilly ride back but the sun was warm on the sand on our protected side of the island. 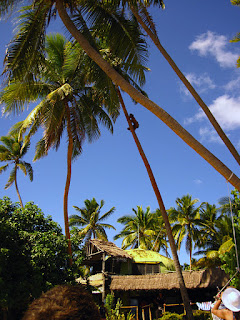 Some of the island guys entertained us by climbing up these palms and littering the beach with fresh coconuts.  They threw down so many, we wondered if there would be any left for the next group of visitors.  It was amazing how fast this guy went from ground to treetop in mere seconds. 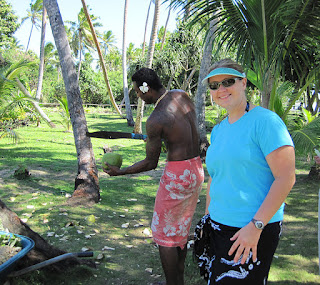 There was another guy on the ground making short work of chopping the tops off of these babies so that everyone could get a taste. 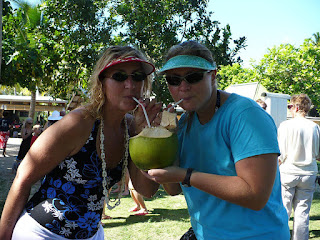 I was "gettin' a taste" alright, but no can talk about...  I'm not a big fan of coconut milk fresh out of the nut... I guess it's an acquired taste.  Maybe when we're out there cruising, I'll work on it. 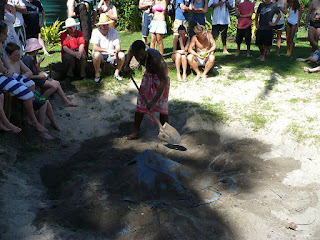 By this time, we had worked up quite the appetite.  Our bodies are so confused about the time of day, we have no idea what time or even day it is back home.  But we are willing to try anything at this point... even the hog and sweet potatoes brought out of this smelly hole in the sand. 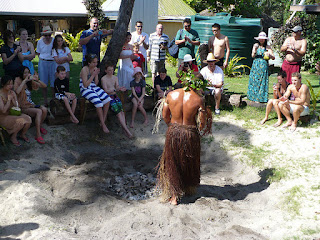 The food was exposed and it looked like a sinew and bone mess.  Maybe I can wait for a while more...  It was taken off on a tarp to the kitchen where noisy preparations were under way.  We were entertained by fire walkers while we waited for the dinner bell. 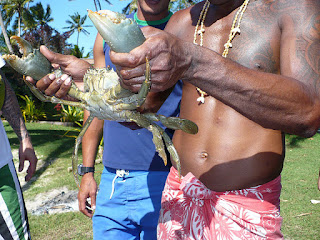 Now I won't say the food was very good.  I'm always up for trying new things, but this was a  kind of smoky and bland.  I picked it over and wished for something more exciting.  Hey!  Why can't we have some of this little delicacy?  Lydia caught him and is taking him home to her family for dinner. 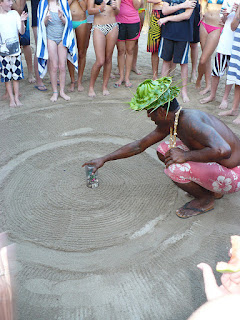 Once the meal was over and cleaned up, the afternoon entertainment began with a hermit crab race.  The crabs all had numbers on them and every participant picked a number.  The crabs were released inside the circle and the first one to cross the outer circle is the winner.  We've done this at home as well with some more sprightly crabs.  There was a lot of cheering but very little movement in the crabs and the winners were pretty much by a landslide. 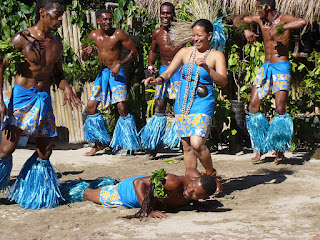 Next on the agenda was a very energetic demonstration of native dance. 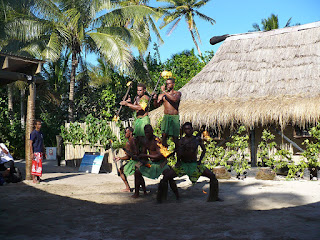 The best part were the fire jugglers.  I've seen these shows several times in my travels, but I have to say that these people were the best by far.  Maybe it had something to do with how close I was to them, but I don't think so...   They were very good. 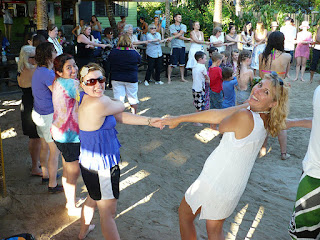 The show was ended with a bit of crowd participation.  We all made a conga line circle and danced around with strangers.  A little awkward but fun. At least it got our juices flowing again.  It's amazing to think that as we frolic on sandy beaches with glistening dark skinned natives... life goes on as usual back at home. 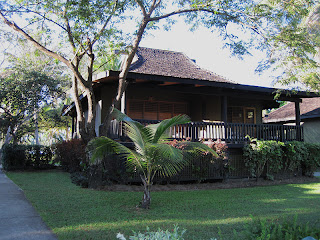 Island time was over and we took a much more splashy upwind upriver trip back to the mainland.  We were running on fumes and I hardly remember the trip back to the resort.  We collected our bags and by the time we were shown to our Bulas, it was dark.  Vic arranged for those of  us who wished it, could have dinner in our hut.  I was so ready for a bath and bed I got on that list.  By the time I had received all the courses of the dinner, which came sporadically, I had waited almost two hours.  I should have just had my shower when I arrived... I forgot!  We're on FIJI TIME!

Our Bulas were the best accommodations of the whole trip and the only ones of which I got no inside pictures.  I was impressed by the way the islanders make use of natural resources and conserve.  The room key had to be in a slot for the electricity to work.  Nice touch.  It was also fun to see the water in the tub swirl the opposite direction.  Finally fed and bathed, I fell into long awaited sleep.