South Pacific On to New Zealand 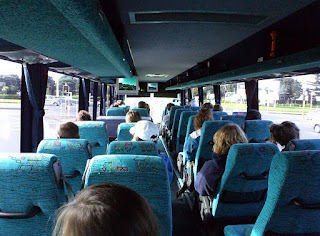 We had a 4:30 wake up call scheduled but I was awake before 3:30 am.  Time Travel is tough...We dressed and joined Vic and the kids for a VIP smooth trip to the airport.  We did some last minute duty free shopping in the airport at the very favorable Fijian exchange rate then hopped aboard a flight that would last just over 3 hours.   Next stop... New Zealand!  Once on the ground, we met up with the other groups that would be our companions for the rest of our journey aboard a posh tour bus for about a three hour road trip to Rotorua. 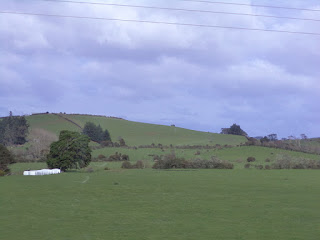 While our eyes soaked up the beauty of the lush green rolling hillsides, Vic filled our minds with endless facts and stories about New Zealand.  The Lord of the Rings was filmed here and there is currently another movie being filmed, The Hobbit, at a top secret location.  Gasoline costs $8.10 per gallon at the unfavorable NZ exchange rate.  With all of the grazing land, lamb is huge here.  Seafood is also big.  Meat pies are found everywhere and highly recommended and Asian food is also common.  New Zealand is made largely up of the North Island and the South Island and numerous smaller islands.  We stayed on the North Island, where Auckland is the largest city.  New Zealanders are called Kiwis. 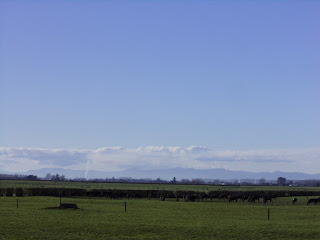 The movement of two tectonic plates here causes a lot of volcanic activity.  The country moves 1.2 inches towards the equator each year. This picture shows the puff of smoke drifting upward from the land as evidence of the subterranean activity. 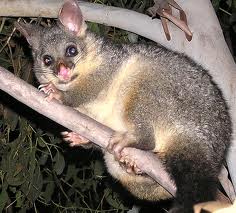 The Tasman Sea lies between Australia and NZ and is often called "the ditch".  Cook Strait lies between North and South Island.  We will see these later in our travels.  NZ is largely agricultural with wool, mutton, beef and dairy being the dominant exports.  Bats are the only indigenous mammals here and there are NO SNAKES in New Zealand.  The Brushtail Possum are a problem here as they multiply rapidly and threaten agriculture.  What to do?  Combine their fur with silk and Merino wool to create a very warm and soft fabric! Possum Silk!  I bought scarves, gloves and socks.  Everyone should have a pair of Possum socks!

The people of NZ are very aware of the damaging rays of the sun this close to the equator.  The whole country is very conscious of the risks of skin cancer.  The slogan: SLIP (on a shirt)- SLOP (on some sunscreen)- SLAP (on a hat) is heard everywhere.  The government has created laws to protect it's citizens.  Companies must supply employees with PPE's or Personal Protection Equipment if it's workers are exposed to the sun.  Long sleeved shirts, hats and gloves...  School children are taught at an early age how to identify changes in moles that could signify cancer.  The social conscience here is refreshing. 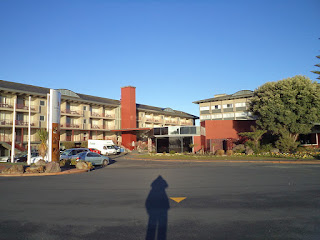 We arrived in Rotorua (second lake) and my eyes darted everywhere trying to soak it all up.  It's very quaint with a "European" flavor.  Lots of buildings that look like we've arrived in Germany instead of a town in the South Pacific.  Strange wafts of smoke rise from the ground everywhere and the smell of sulphur permeates the air.  Our hotel looks like a ski chalet and is nestled up to a beautiful serene lake with black swans cruising lazily around.  Did I mention that it's WINTER HERE? 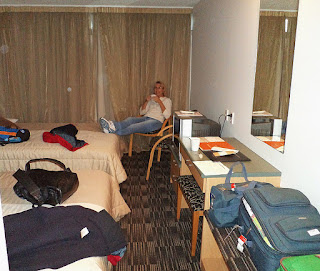 We checked in and were given our room keys... yes Room Keys.  The hotel Sudima.  I loved the place instantly.  You can "feel the 50's" here.  Our room has a dilapidated radiator for heat which was definitely NOT working.  We had to get some space heaters which warmed us up nicely.  It was nice to relax with a hot cup of coffee after a long day of travelling. 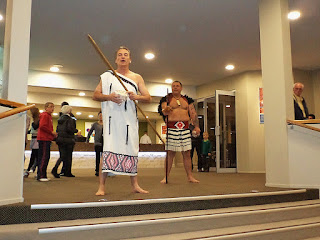 Dinner was at 6:30.  Many of our group gathered before dinner in the hotel lobby where there was Internet access.  But for that, the place looked like something out of an old Dean Martin movie.  We were invited to dinner by the Chief and villagers who would later perform for us. 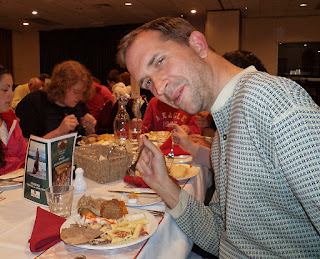 Dinner was a buffet consisting of authentic local dishes including the sweet potato called kumara.  It's very different from our sweet potato.  The dinner was strange and while Michael embraced it, I was not so sure... 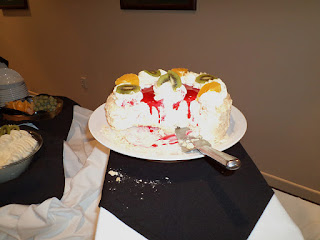 Vic had given us the heads up about the desserts so I was saving my appetite.  I was not disappointed!  There was the heavenly Pavlova!  OMG it was good and I stuffed myself. 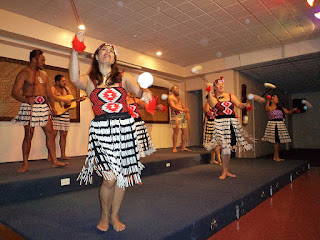 Just as we were finishing our dinner and chatting with our Canadian companions, the natives came back in with a rush of guttural sounds.  Its time for the Haka! 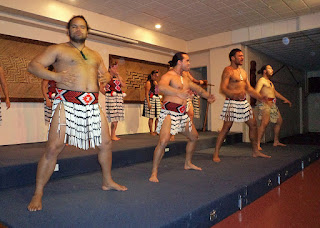 We were treated to an informative story and dance about the origin of this traditional Maori dance, complete with loud grunts, wild eyes and tongues out!  Oh and don't forget the body slapping!  The purpose of all this was to appear scary to the enemy.  It works for me! 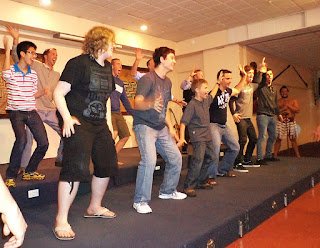 There was a crowd participation opportunity and our Michael joined others of our group to learn some Maori moves... 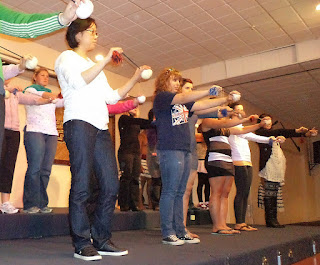 Melissa got in on the action as well, with a lesson in the use of the traditional Poi Balls.  These women really know how to wield a ball...  I would probably have knocked myself in the head!

We were all released to do as we pleased after the show.  Some went to the hot springs pool while others spent the evening surfing the Internet and updating their Facebook.  Of course I went off to dreamland with every expectation of another action packed day with an early start.