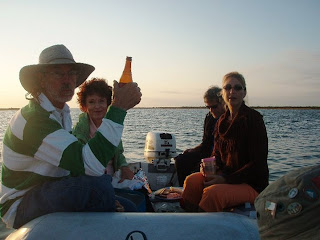 This Saturday morning, we got going a bit late.  Bruce's back was bothering him but it loosened up once we started moving around.  We went to look at a Van that Bruce found on Craig's List, pretty much made a deal all but a test drive and writing a check.  Bruce will go back on Monday and do all of that if it meets his standards.  Goodbye old beat up van... good riddance.  We loaded up our stuff and boarded Elan to follow the BYC Pack out to Flato Cut.  We had a beautiful sail across the bay with nice winds and about 6 tacks.  There was no dolphin show today.  There were already 11 boats anchored in Flato when we arrived.  People were buzzing around in their dinghies.  We couldn't get our old faithful dinghy motor started so we were collected by Dean and Aleta.﻿ 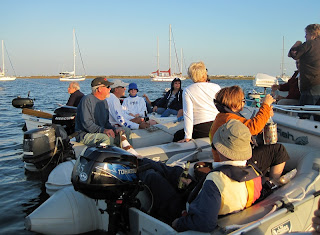 We sped over to the "Raft-Up"   The plan was to bring wine (or in my case, fruity drink) and cheeses.  Everyone was passing around the plates of stuff when we arrived.  We had our own problems!  Do you know how difficult it is to balance platters and drinks while bobbing around in a dinghy pack?

If that wasn't bad enough... the motor boat we had attached ourselves to started up their motor and began dragging our little flotilla around.  Some things seem better in the idea stage than in actuality. 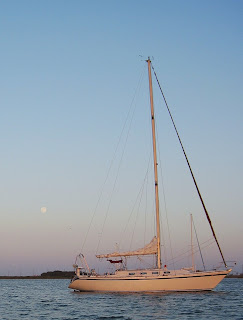 It was a beautiful evening.  The moon came out full.  We all disbursed to reconvene aboard Adagio for soup at 6:30.  Bruce and I settled in and I took one look at the cool dark and decided that we were in for the night.  It's been a long week and my jammies were calling me.  We heated up some home made chili and kicked back in the cockpit to enjoy the bright moonlight.
Dean called us to see if we would like to be picked up.  Bruce declined.  Not long after that, Bill called.  He gave us a hard time about not going over and hanging out.  Called us all kinds of sissy names and ended with Poor Bruce.  I had to tell him we were having "wild boat sex" to get rid of him. 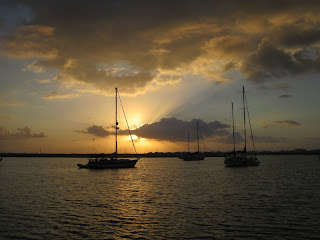 We passed the night peacefully in the V-berth.  Bruce had closed up the boat in anticipation of it being cold overnight.  I awoke sometime in the night feeling suffocated.  Bruce opened up some windows to let in the fresh air.  We tried removing the sunshade over our bed but the moon was blaring bright.  The winds never let up but they made for a nice rocking through the night.   Morning in Flato Cut was beautiful and peaceful. 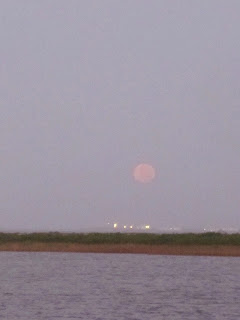 We cold see the moon setting far off in the distance over Corpus Christi.  I got this in the last moments it was visible before it retired for the day.  That moon worked hard all night! 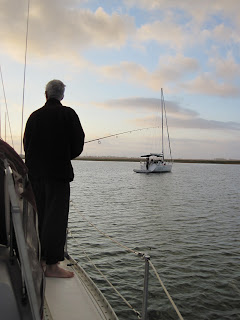 Bruce  tried a bit of fishing while I caught up on reading my Lats & Atts in the cockpit.  His plan had been to take the dinghy around the shores to see what he could catch, but the motor still wouldn't start.  He worked on it for a while with no luck. 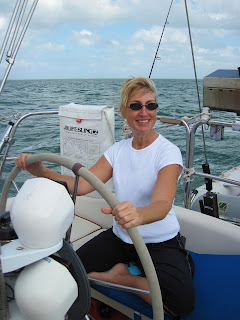 ﻿One by one... the boats left the anchorage to head for home.  We lounged around, made breakfast, then pulled up our anchor as well.  We left at around 10:30 to make our way back.  We began with nice winds, which died down for a bit, then quickly built again to have our boat pushing 8 kts as we surfed the waves towards home.  Bruce had a great time while I drowsed.  All too soon, we were back to reality and off to catch up on the laundry.