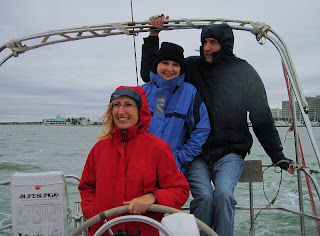 I've had issues with my back all week, but we didn't sail on the Wednesday night pursuit race so that I would be ready for this weekend's Turkey Day Regatta.  I just had to do it!  No matter that the weather was dreary and just too cool... Melissa had her new Beau here to "Meet the Parents".  Say hello to Michael! 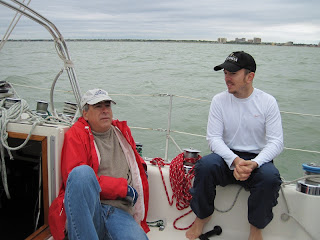 We had trouble finding crew this week.  Down to the wire on Friday evening, we thought it would just be ourselves, Melissa and Michael, Brittney and Matt.  Only late Friday did we get confirmation that Bill and Josh would be out with us today.  And to round out the foredeck, our own Brett ended up with us somehow. 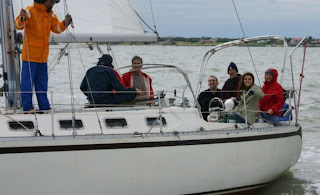 We were thrilled!  I wouldn't be of much use on this day.  My back just couldn't take it.  We had planned to have me behind the wheel, but with all of these hands on board, I was off the hook.  We left the dock once everyone was suited up with appropriate jackets and foulies.  We left the gap and sailed on our new 150 head sail towards the race start line. 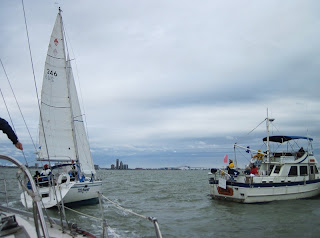 There would be three races today.  We all jockeyed for position after arriving late with the start countdown already ticking away.  We ducked behind Windswept's transom then ran the line and started at the pin.  We were Off! 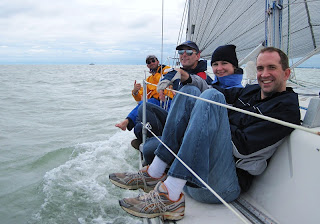 The course was "A" mark, #1 then finish.  We sailed upwind to A mark carrying our overpowered 150 sail.  Warrior had us pinned until they tacked away.  We were close to the lay line when we tacked and were able to sail directly to the mark arriving there ahead of Warrior.  We were thankful for all the bodies we had to sit the rail today.  The boat was heeled over the whole way. 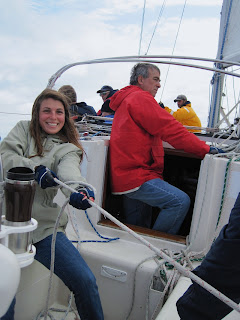 Brittney was back in the cockpit making herself useful in a big way!  I had hoped she would like sailing since she's come to CC.  If she doesn't like it, she hides it well.  She was everywhere on this race. 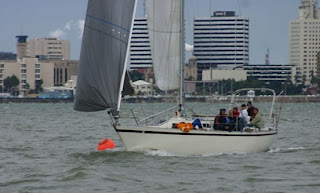 We had a hard time finding mark #1.  We sailed high of the mark and Warrior followed us up.  The whole crew was on the lookout when I finally spotted it off to our port side.  We dove to it, rounded then drove to the pin.  It was a parade to the finish line.  We led the group with Warrior second, and Adagio third. 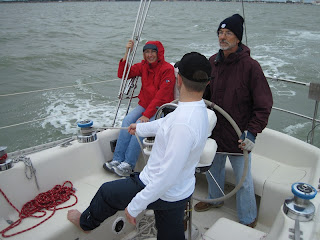 By this time, I was having some issues with the back.  I was clinging to the corner railing behind Bruce to avoid pain.  We sailed away from the start area and Bruce made the decision for a head sail change. 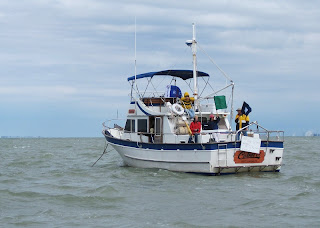 The crew took down the big jib and hoisted the blade.  We took a reef in the main and headed back for the start of the second race.  Everyone was in high spirits coming off that first race.  It was cold (well... extremely cool) and dreary but we were doing well! 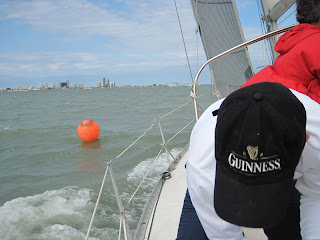 We arrived at the start line first and ran the line.  The winds shifted and we barely made the pin end of the start without having to tack and try again.  Windswept wasn't so lucky.  They stalled at the line and ended up tacking and falling far behind the pack. 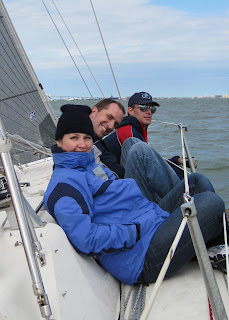 We had the same course for the second race.  Once again, everyone was on the rail. We sailed above Warrior and tacked away first.  They continued on and when we reached the A mark, Warrior had to duck us.  Bruce had called the lay line perfectly and we sailed right to the marks. 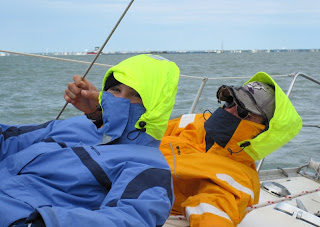 I couldn't help but notice that Melissa was on the rail looking quite miserable.  At this point, I told her that the foul weather jacket she was wearing had a hood inside the collar.   She and Matt both took the cue and hooded up.  Things were better after that.  It was cold sitting that rail! 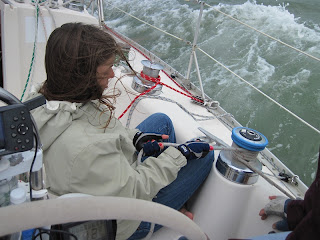 Brittney was only wearing a light jacket but was working hard in the cockpit.  She had no time to feel the cold. 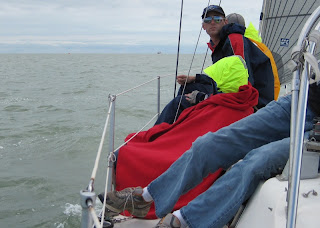 There was a bit of good natured ribbing going on about those who were cold could always get off their butts and work up some warm.  Melissa responded to this by donning my Red Riding Hood... 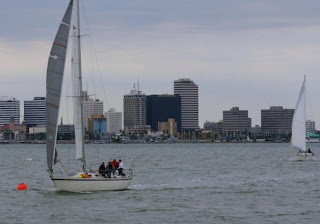 We rounded the second mark and led the pack to the finish again.  However, Adagio corrected out in the lead.  Later, Hal said that he thought he should have held course and would have made it in front of us at the first mark. This would have changed the outcome of the race and the Regatta, but... that's sailing! 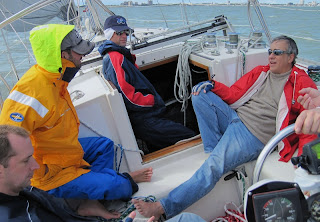 We learned from the race committee that there would be a lengthy wait between the second and third races.  The crew grumbled a bit then kicked back in the cockpit to wait as we tacked back and forth.  Brittney went below and whipped up some sandwiches for everyone.  Who IS that girl...? 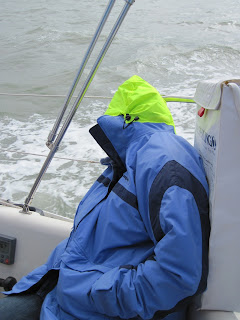 Melissa found it warmer in the cockpit and tried to take a little snooze.  The sun even came out a little bit to help us out, but not enough for her.  She was chilled through. 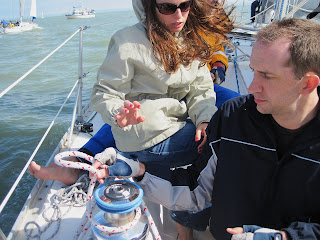 Brittney gave Michael a quick lesson on wrapping the jib sheet around a winch.  So she's graduated from Trainee to Trainer! 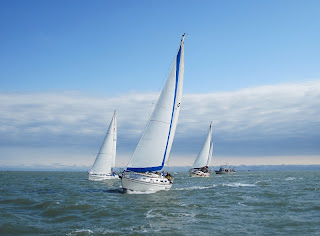 Finally!  It was time for the third race to start...  We tacked in front of the other three boats and maintained control of the whole fleet.  The course was now A, B, A #1 then finish. 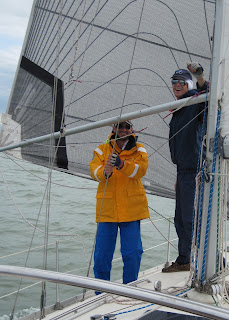 This longer course with a downwind leg, provided the opportunity for our foredeck to spring into action...  Matt and Brett took control and set the pole for wing on wing.  We were in the lead!  They had no interference from those of us in the back and they did great!  They were proud of themselves and rightly so! 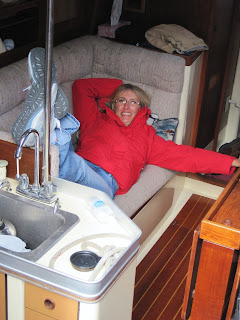 I was not doing so well by this time and decided that I needed to go below.  All of the bouncing around had caused my back to launch a major spasm and I was nearly in tears.  It relaxed once I had established myself on the settee.  It was a bit difficult to maintain my position with all of the tacking going on.  Not the way I had envisioned this day to go, but at least I hadn't missed the entire Regatta. 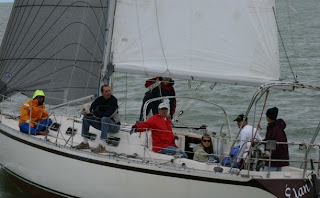 We rounded B mark and headed back to A.  We had a substantial lead on Warrior and were going to cover them if they tacked.  The didn't tack until two thirds of the way up the course, and we should have tacked with them.  We continued to the lay line and the winds went light as we approached A mark and Warrior was able to regain much of the distance we had made on them.  We rounded ahead of them and maintained our lead around marker #1 to the finish.  We were first over the line again, but Warrior corrected out in the lead, with us in second and Adagio third. 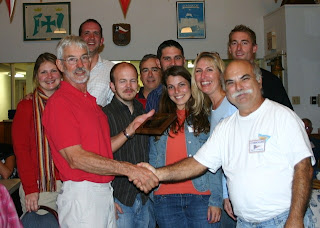 Friday night, we thought we had minimal crew.  With the addition of Bill, Josh and Brett, our crew did just a great job!  We owe the day to these people as they made all the right calls and adjustments that led us to a First Place Finish in this regatta.   We must say here too, that Brittney did an outstanding job and Bruce awarded her the trophy as a memento of her first Regatta in which she was a big part of bring home the win!