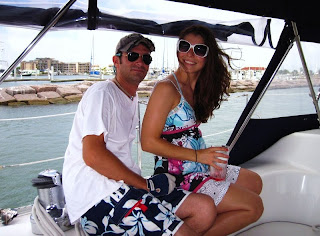 There was a lot of indecision about the race today. Earlier in the week, the forecast had been for high winds and seas. I decided to help the BYC Cruise Dude with the dinner instead of sailing on SeaFlight in the Offshore Regatta. Then the weather moderated and Brittney decided to bring her beau, Matt to meet us and stay for the weekend. He had never sailed before and I was nervous about sending him out with Bruce and the guys. 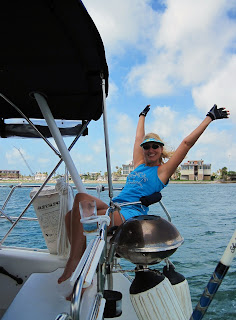 When the course for the Cruising Fleet was announced on Thursday night to be a short one... only 5 miles to the mark and back... we all decided that it wouldn't be an all day event. We would have plenty of time to sail and then prepare for the dinner which would be held at 7 in the evening. So, I decided with the winds moderating some, it would be great to go out sailing with the guys and the kids. Brittney has never been offshore here at home. So, we were off! 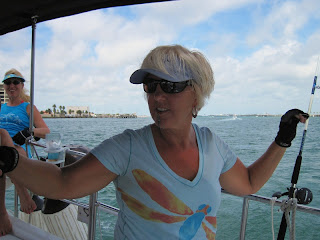 There were only 4 boats in our fleet. There would be prizes for finishing as well as a prize for the biggest fish caught while trolling. You see... the "Cruising Fleet" racers are just as serious about having a good time as they are about winning. Why go offshore if you aren't going to drag a line?!! Brenda got the gear out and tied on the magic lure given to her by our mutual friend Doug last year at the Harvest Moon Regatta. It was sacred. (Don't eat it Brenda... it's for the FISH) 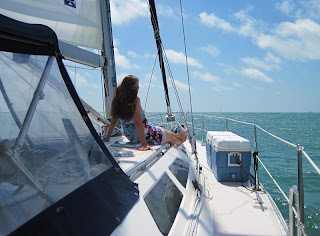 My little Bathing Beauty made her way to the deck to sunbathe. I had told her I didn't know if there would be sunning opportunities or not on this trip. She took every opportunity. The waves were not really bad as we motor sailed out through the jetties towards the start line. 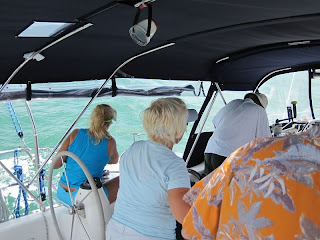 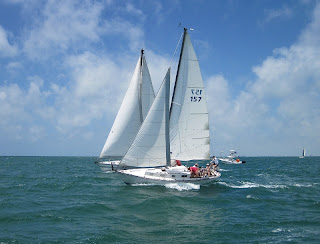 We were barely going to make it without brushing the tetrahedron representing the far end of the line. Just when we thought we just might squeak by, Windswept came alongside and took our wind, causing us to lose way enough to slide into the marker. We immediately turned to go back to re-cross the start line, which caused the mark's anchor line to snag on our rudder. We began to drag the start line along with us! Around and around we went as Bruce tried desperately to dislodge it by hanging precariously off the sugar scoop jabbing at the line with the boat hook!


There are no picture of this drama as it was too tense for anyone to even think of taking them. We thought we would lose Bruce off the stern at any minute. Who knows what was going through our newbie's heads. The fleet sailed away and we finally got the marker off by turning the boat around the way we had come. It just fell away! We floated off for a "day sail" on winds tinkling with laughter and taunts of "you'll get a Blind Hog nomination for this"! Oh well somebody has to win the award signifying the dumbest thing done on the water for the year. Winning it for this will save someone else the indignity of it all. 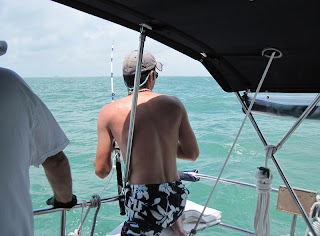 We got our fishing gear out and decided we would go for the Big Fish prize since we had ditched the actual race. Matt, being a motor boater and fisherman from way back, took over the playing out of line. There was a lot of seaweed out there and when the line took off with a zing!... I just knew it was flotsam. But no! He caught a fish! He played it for a short time while we backwinded the jib to stop the boat. 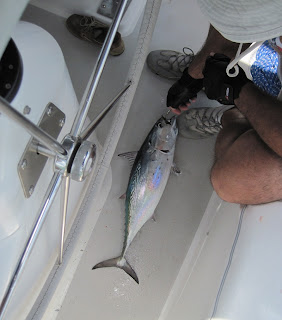 He got it aboard and Russ took over trying to dislodge the lure from it's mouth. It didn't flop too much. It was a Skip Jack Tuna. They're kind of stiff. Anyway, he finally got the hook out and we took some pictures to prove we had caught something. 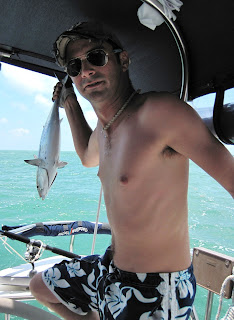 Matt did the honors of throwing it back, only fitting as he was the one that brought it in. 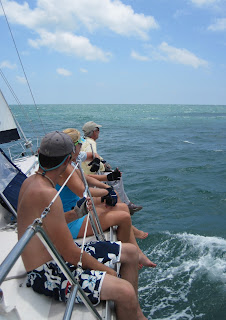 We decided to rest on our laurels and quit fishing. We all got out on the rail and got down to some serious racing. The water was beautiful and the seas were kind. We made it around the mark, bringing up the rear. 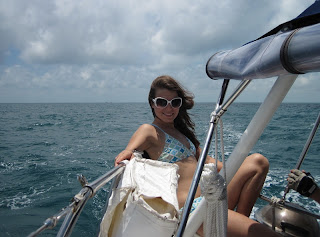 On the return trip, we made up a little time. There was no chance of us overtaking anyone. It was better than being at home doing laundry by all accounts! 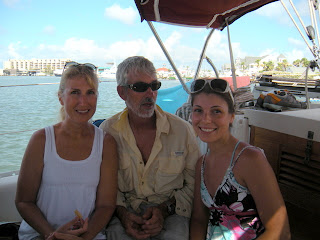 Once back onshore, the dinner was well underway. They didn't need us so we cleaned ourselves up and had a snack. We had some people stop by the boat for a recap of the mark dragging. Someone had taken a picture of the mark's anchor. We bent it 90 degrees! Oh well. 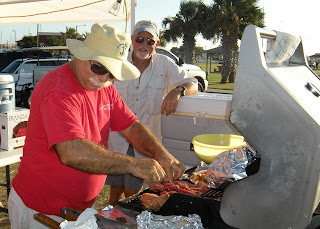 We went below for an hours nap then went out to the party tent to join the festivities already well under way. The Cruise Dude and the Commodore were doing a smashing job of turning out the fajita dinner. 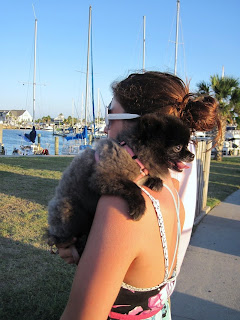 We hung out and chit chatted after eating while waiting for the awards "ceremony". Everyone was worn out... including Leila. I think she just wanted to go home. 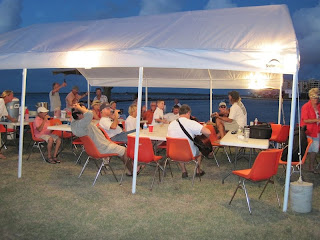 We made it to dark and listened to the "Sailing Minstrels" for a while. We weren't going to make it... We caved and headed off to the boat for a great night's sleep! It had been a full and fun day on the water and there was another one planned for Sunday!