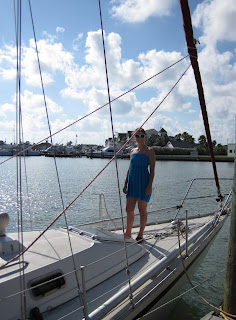 Saturday Morning dawned bright and beautiful in Port A Marina. Brittney and Matt seemed to be enjoying the weekend spent with the Old People. They had to be back in San Antonio in the early evening so they stuck around as long as breakfast on board Merlin (Thanks Jan and Bill) and they got on the road. It was such a treat having them with us for the weekend. 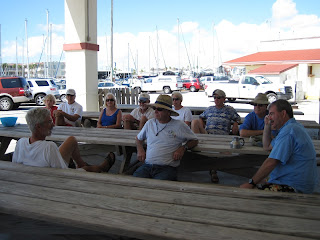 Bruce held court briefly over at the Pavilion for a Skipper's Meeting. He was stepping up to the position of Race Dude in the absence of the vacationing Primary Race Dude. Bruce is Assistant Race Dude for BYC. Just another of the offices he has assumed this year. 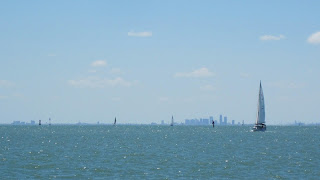 Today's race was the 5th in the BYC Saturday Series, only it was being held on Father's Day Sunday. Long story. It was a staggered start (pursuit race) and Elan was the last boat on the starting line right after Doug on Tom Kat. We waited around for over an hour from the time the first boat began the race. We could see the boats in the distance as we sailed down the Ship Channel. 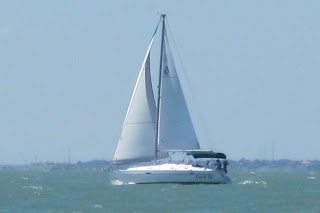 I was wiped out from all the sailing yesterday and was glad the sail was an easy one. I had to do minimal duty as Bruce can pretty much sail the boat by himself. I caught up on my sunbathing and reading and generally enjoyed the day. Not so my Sailing Sisters! We crept up on Terry sailing her (and her husband's) boat Eau De Vie with a crew of her own. Her husband was busy sailing as crew on Windswept! Now I do alright at the helm if I say so Myself... but am I ready to go it without Bruce? I don't think so! Way to go Terry! 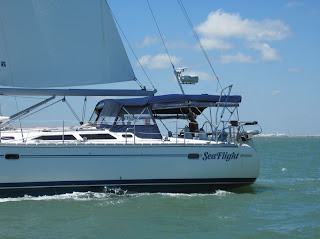 Next thing I know, along comes SeaFlight with my girl Brenda at the helm. Husband Mark was steadily tweaking and trimmin' sails while she handled the boat all the way across the Bay. Another point for the Femmes! Hey, they're making me look bad! I'm not worried, I get plenty of helm time. We ended up making up time on a few of the total 9 boats that started today's race. It was a reach all the way with no up or downwind leg to even the playing field for us. The boats that won were worthy of it from an improvement standpoint and everyone was very happy celebrating their win. Congratulations Adagio and see ya on the water!