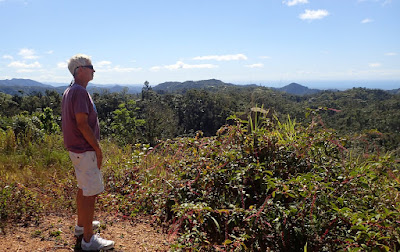 The history of coffee production in Puerto Rico is long and fascinating.  My love of the stuff has brought me to appreciate the struggles of the suppliers after near devastation by Hurricane Maria in 2017.  One of the few working Haciendas currently giving tours was our destination for this family vacation day as we set out early for the drive into the mountainous interior of the island to visit the Pomarrosa Coffee Lodge.


Tours are by appointment only and we received instructions for the drive up into the highest mountains of the island's west/central interior.  Driving up highway 10, Google tried to send us the shortest route, which is evidently quite treacherous.  If you take 503 as Google Maps suggest, you will experience a road so steep and winding that even the locals won't go there.  We were happy to heed the warning and continue a couple of miles further on Highway 10 and take 143 all the way to the Hacienda.  Even this was spectacular with expansive vistas of the mountains and the Caribbean Sea.  The final mile or so was hair-raising enough, I hate to think how 503 could be worse... but after a quick stop to look for fossils... we made it to the Hacienda with time to spare before our tour began. 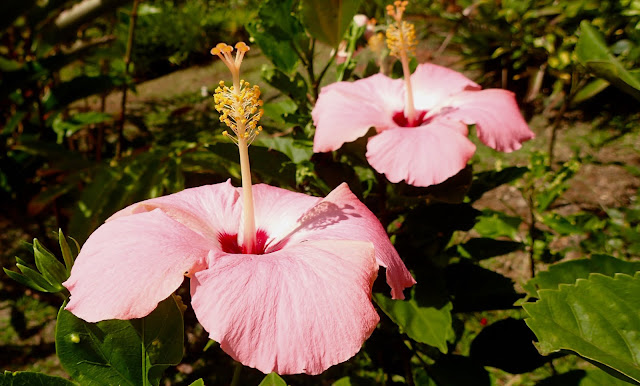 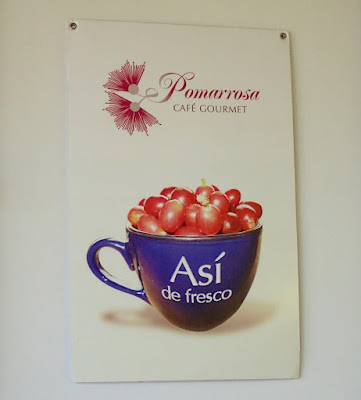 As I had hoped, there were treats waiting for us.  A delicious cup of island-grown coffee brewed by the grower himself, AND fresh-from-the-oven banana bread, also from local bananas, was passed out to the group.  Mmm delicious!

While we enjoyed one cup, or maybe two... Kurt, the coffee farmer himself, led us through the history of coffee from its very beginning in Ethiopia and then moved to Arabia, which grew the beans now known as Arabica.


It is truly fascinating and worth the time if you're a coffee lover like me.  Kurt described how coffee came into popularity in the many different countries, and why. 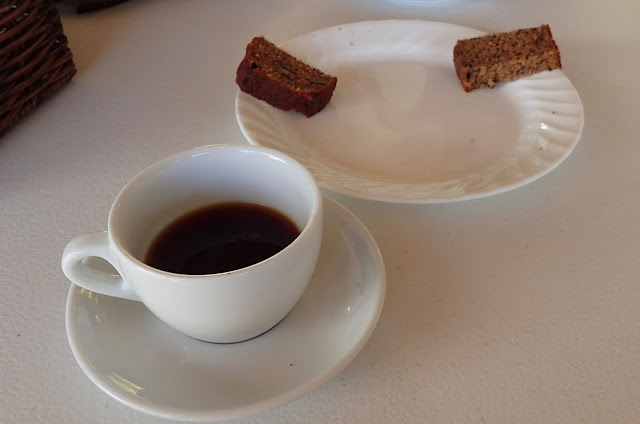 After the history lesson, and a Q&A session, we were done with our coffee and ready to take a stroll among the coffee and banana trees.  Bottom line is this: Hurricane Maria nearly wiped out the coffee industry in Puerto Rico.  But prior to that, the growers were already in a bit of trouble with government regulations and price caps.  The workers needed to work the plantations, harvest and process the beans just are not here, for any wage.

The coffee trees are susceptible to disease and changes in climate that have left the farmers struggling to make a living and frankly, the only thing that could help them at this point is not the free, rather sickly trees given to them by the government, but public acceptance of higher prices in exchange for a labor-intensive tree-to-cup process that produces a heavenly-tasting product.  For myself, I'm no coffee snob and I love the mid-priced coffee we've found in Puerto Rico and other islands... and I defile it with creamer ~ something I was embarrassed to admit to Kurt the Coffee Farmer. 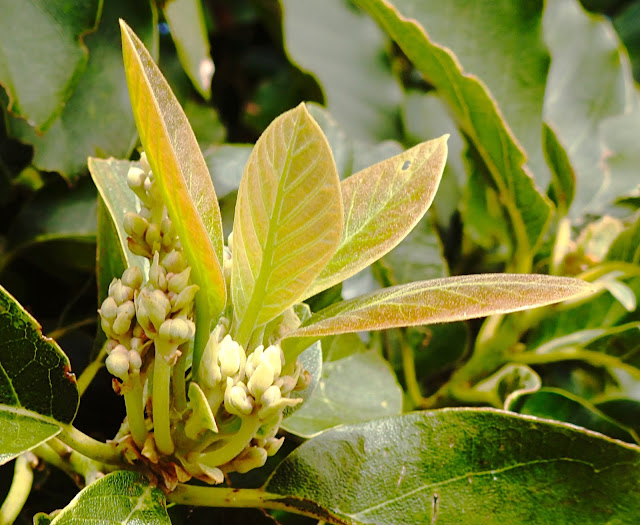 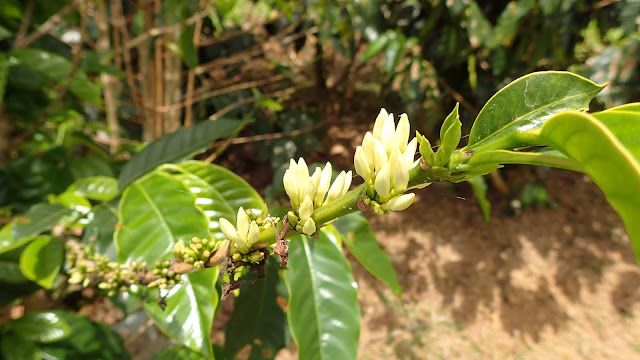 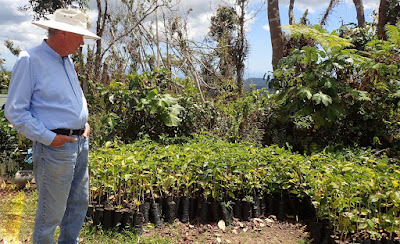 Concluding our stroll through the sloping coffee farm, we ended with a look at a bunch of the "free" trees given to the growers in hopes of reviving the industry.

Kurt told us that it has been so dry lately that many of the trees are still waiting to be planted.  They can't dig holes through the hard, dry soil.

The trees are somewhat sickly looking and many of those already planted have sickened and died.  It's not looking great for the coffee industry in Puerto Rico. 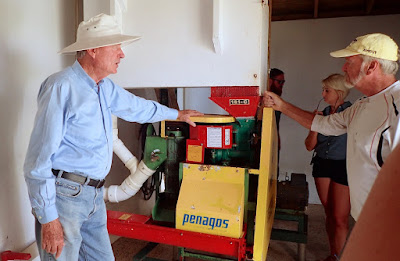 We moved into the production buildings where Kurt described the process.  He had only a few beans from past crops to use since it's not harvest season currently.  The processing of coffee is very similar to that of chocolate, so we were familiar with the drill. 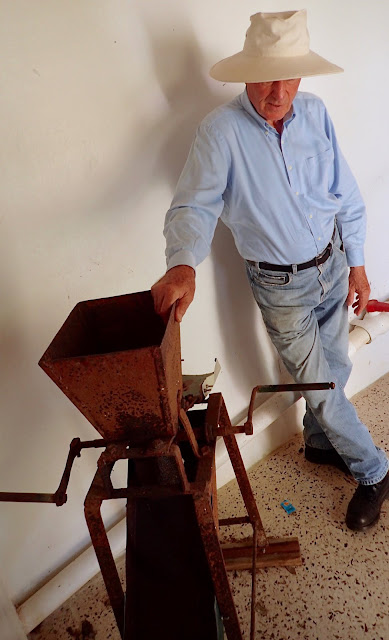 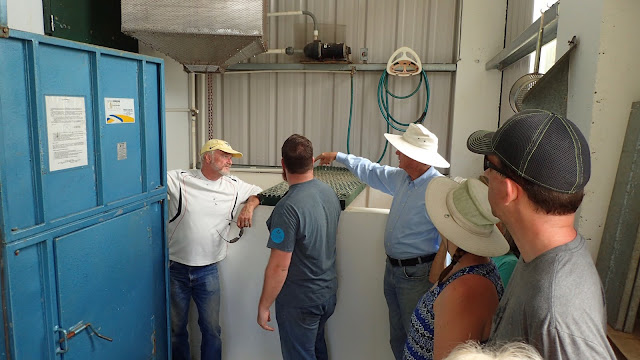 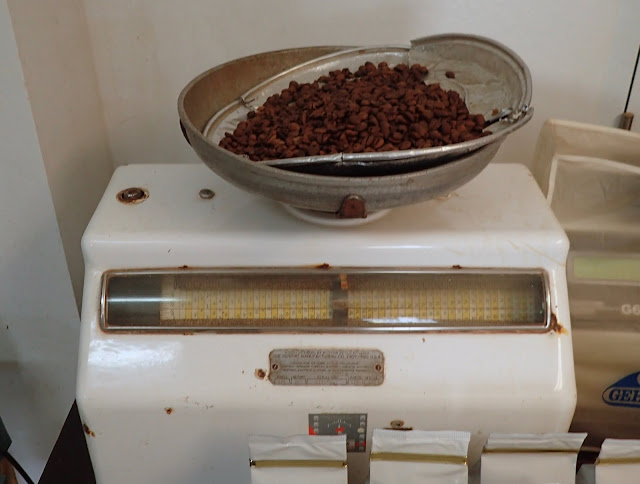 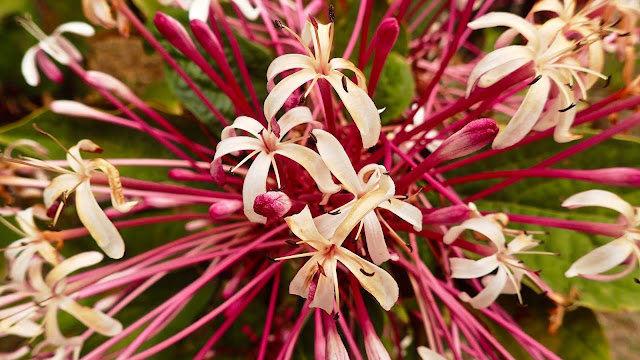 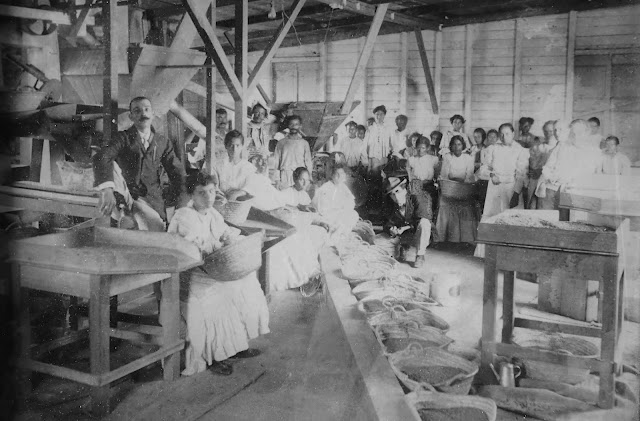 There is a rich history in the production of this nectar of the gods that I enjoy every morning.  This is the first tour we've taken that has encompassed the entire history from its very inception.  It was interesting to learn about how coffee came to be a part of our everyday lives, and for the sake of our new home island, we hope that the farmer's soon recover from the blow that Nature dealt them... I for one... will do my best to support them by drinking Puerto Rican Coffee whenever we can get it!