Long before we began cruising I read about this thing... and I wanted in!  My bucket list gained one as I added "participate in a Hash in Grenada" to my things to do.  And now, we just finished our THIRD!  (see hash one and two)

So why do it?  Why leave the comfort of our boat and set out into the unknown?  Well that's exactly the reason to do it!  Hashing is the best way to experience parts of the island that we normally would not see.  Hashes take you out into the forrest, through private property and onto the back roads for a look at the "real" Grenada! 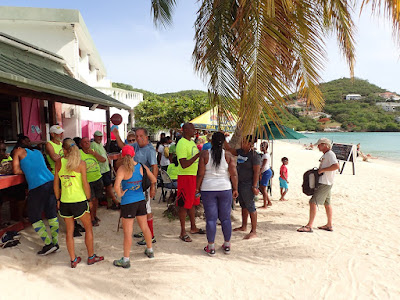 Bruce and I can get wrapped up in the day-to-day living and boat maintenance so much that sometimes we go days without seeing another human.  We have to make a concentrated effort to socialize, so when Mindy and Ron mentioned that they had never done a hash, I was thrilled when Bruce agreed to participate in their first one!

This hash was advertised to be a relatively easy one, the perfect way to ease into it for our friends!

We took Shademan's van to BBC Beach on the southwest side of the island and joined a growing group of walkers and runners as the music started the party right. 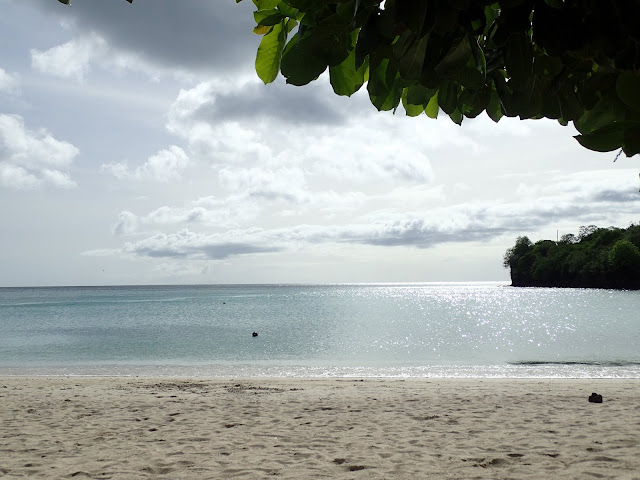 It was really hot when we arrived, so we sat beneath a small palm and conserved our energy until time to go.  After the opening ceremony in which the Hash Virgins received their instructions, they turned us loose in an undulating human ribbon that streamed up the beach to the stairs that led us to the road and the start of today's adventure.

Our strategy was simple.  Stay in back so that the people out front could make the mistakes!  This trail was said to have ten (10) false trails!  WHAT?  Yes, false trails.  There were three actual trails, one long one for the runners and then a shorter one and a third even SHORTER trail for us slackers walkers.

The paper poofs that lead the way lead to circles which signify that a decision must be made.  One way is a false trail, while the other way leads on to the next segment of the hash.  Being conservative would ensure that we did not go astray of the real trail... we hoped!  We would decide later whether we would take the longer or shorter of the walking trails...  Let's just see how this goes. 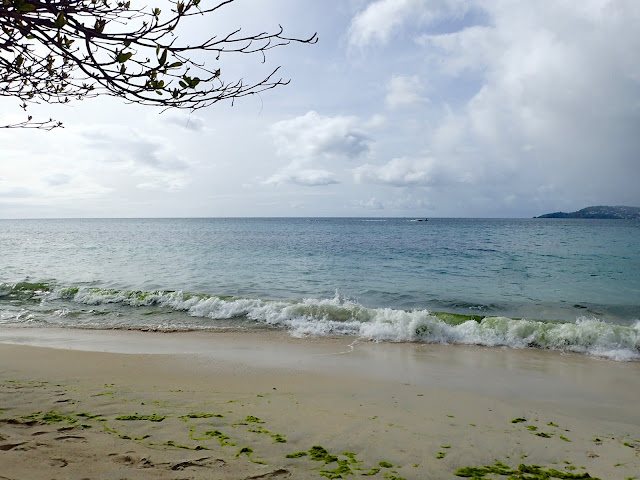 This is the part that I love to hate.  It's tough slogging up these steep hills.  The path is rough and many times the tiny rocks slide right out from under you causing a minor slip that could easily become a major one!  Luckily today, despite the morning rains, the trail was completely DRY! 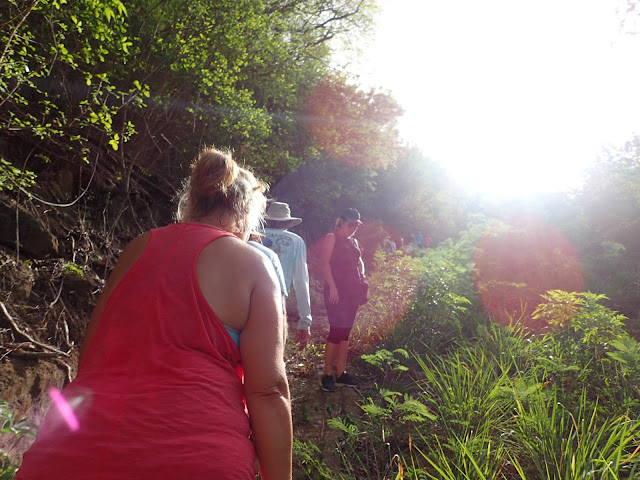 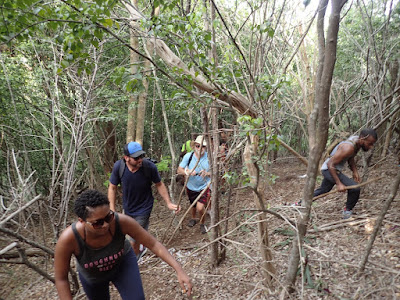 After making it around that corner, we continued our climb to the top of the hill.  It was the most treacherous part of today's hash, requiring full use of arms and legs.  The trail grew more and more steep and the soft dirt and leaves on the forest floor were a bit slippery.  We used the tried and true method as on previous hashes, and pulled ourselves forward and up using the conveniently spaced saplings.  It was a full-body workout and another of the reasons we Hash.  The workout is perfect for keeping the mind engaged and alleviating the boredom that repetitive exercise can bring.  You never know what's up ahead here!  That keeps it FUN!  If it weren't for the screaming muscles, you would never know you were exercising at all! 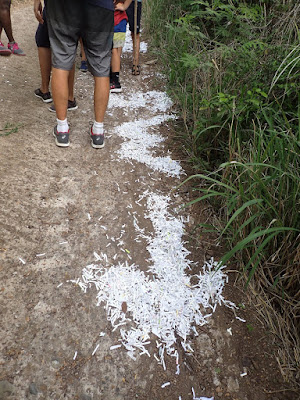 We reached the top of the hill and found the indication that going right would take us to the Short Walk trail.  NOW you tell us???  After all of this, we were ready to go the easy route!

The rest of the trail was relatively tame.  Most of it was on cement-paved road and nothing really steep. Yes, we picked an easy hash! 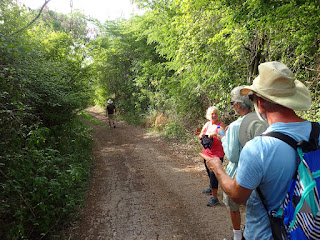 Now that we were no longer struggling physically, we were free to take in the sights!  The beauty spread before made the time pass quickly! 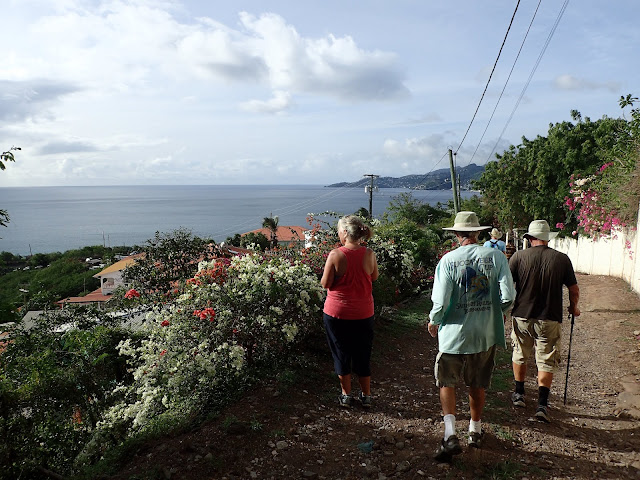 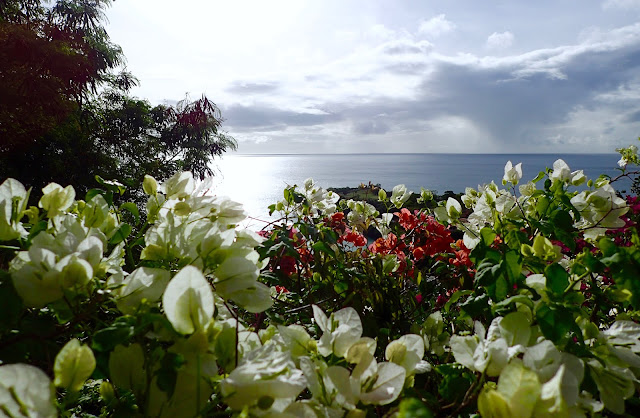 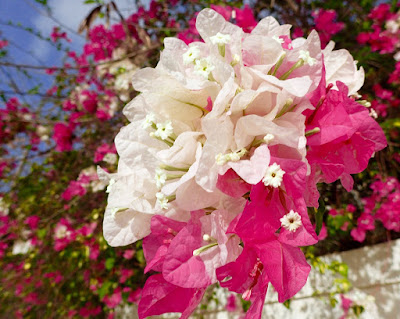 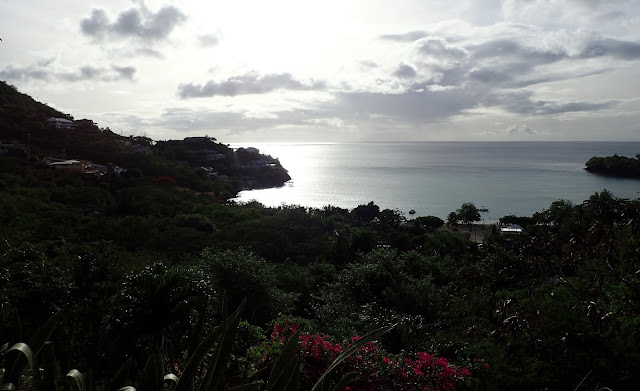 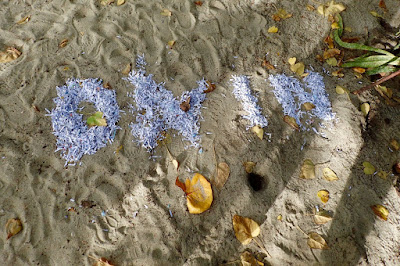 This is what we've been looking for!  The finish line!  These are the last poofs we'll see today and our spirits revived as we kicked off our shoes and dug our toes into the warm, soft sand for the final stretch!


Free of the shoes that bind, my feet are once again happy.  We enjoyed the cooling breeze as the sun sank low and the sweat evaporated on our warm, flushed faces.  We did it!  Once again snatched victory from the jaws of death!

And THIS is also why we hash.  For the ending.  For the feeling of accomplishment and laughs with fellow hashers.  For knowing that we will remember this day in the time to come as we encourage future Hash Virgins to participate.  The camaraderie, the exercise, the view, the photo ops and the post-hash-euphoria have us coming back again and again...