Let There Be Dancing!

Today is our 14th Anniversary and we hardly noticed.  I could say that we planned this whole special evening for our celebration, but that would be a lie.  I guess it's fitting that, similar to our actual wedding, this celebration was just whatever we happened to be doing today!  Some would say that our whole life is a celebration, and it just doesn't get any better than this!

Our day started with the usual.  Cruise the internet, listen to the morning Cruiser's Net, have some breakfast and then do whatever job has made it to the top of the "boat project quicksand".  This morning it was cleaning the dinghy.  That took the better part of the morning and then it was time to have lunch and rest up for the evening's festivities. 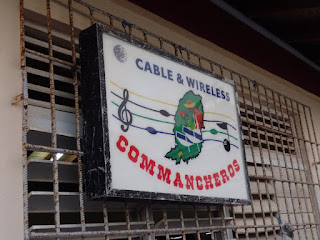 As cruisers, we have a standing rule never to try to do more than one thing in a day... and tonight would require that we conserve our energy!

At about 5:something, Shademan arrived to pick up our group of nine to whisk us away... up into the hills for an adventure.  We really had only a vague idea of what was in store for us... but that's kind of how our life is now, and we're good with it!

During our ride, Jane and Paul (Peace)were sitting behind us and I heard them talking about how much they had missed Grenada.  They've been away and arrived only a few days ago to take a mooring near us.  I smiled at their conversation because I know just how they were feeling.  There is nothing like flying through the streets, breathing in the rotation of scents from so many flowers, rum distillery fermentation tanks (ick), and chicken cooking on open fires.  It just brings a smile to our faces and the feeling of homecoming to our hearts. We love this island!

But where are we going? All we knew was that we're going to listen to a Steel Pan Orchestra, the Commancheros, rehearse for the upcoming Carnival festivities.  And there was also the possibility of popping in to see how progress was going in one of the many Carnival Costume shops!  On our way, Shademan called ahead to arrange for our dinner.  First they offered us Lambi Water but it was the general consensus that we would pass on that.  Eventually the call came back with an offer of chicken-N-chips and we had a plan! 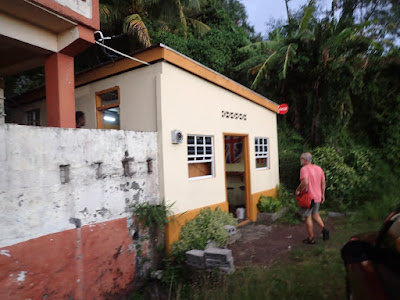 Shademan stopped abruptly and parked the van outside a home with a small attached bar. We were welcomed by a diminutive woman named Mary, and her family just getting to work on making us some dinner.

But that would have to wait. We could hear the sounds of the Steel Drum Orchestra just up the hill, leading us like a siren song.

We walked across a schoolyard where some kids were throwing a basketball at a hoop, borne by the growing sound. We mounted the steps into the room where invisible arms wrapped us in a vibrating, pulsing, heart jolting rhythm.  A whole roomful of kids of all ages were nonchalantly playing steel drums of many sizes.

Their faces were blank as if they were NOT actually the creators of this magic.  Some seemed sheepish as we brought out our cameras, but I couldn't help myself... I had to take a little piece of this home with me.

We crowded in the small space near the door and let the music wash over us as the band director ran the kids through two pieces over and over.  The sheer power produced by these simple instruments was phenomenal.  I've tried playing one of these drums and I can't get anything out of it that resembles this!

The band director was unlike any I've seen.  he was totally jivin' and Bruce caught me admiring the way his butt moved independently of the rest of his body.  This man has rhythm!  I stood fascinated and just taking it all in as they went through their songs, not a piece of sheet music in sight.   Now and then the director would hear something that he didn't like and the band would stop.  He would go over to one of the students and show them what they were expected to play.  How he could possibly have picked out one wrong note in all of that was just amazing. 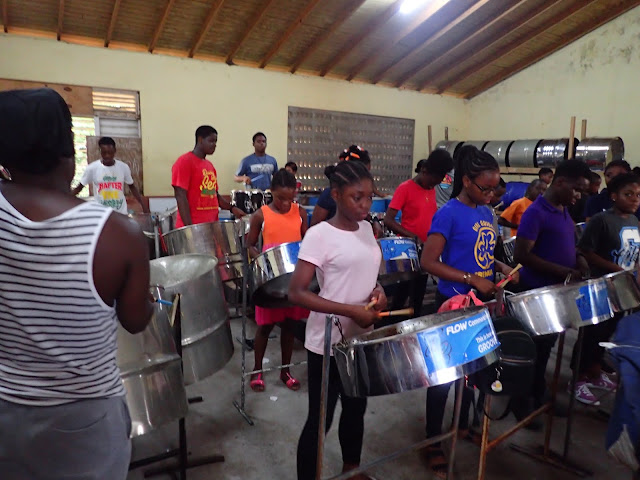 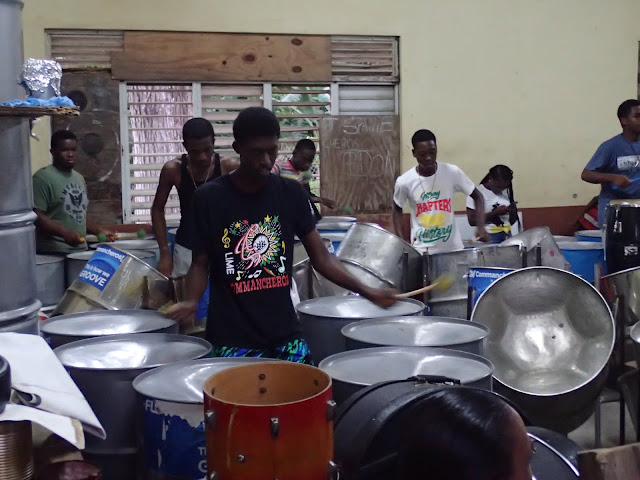 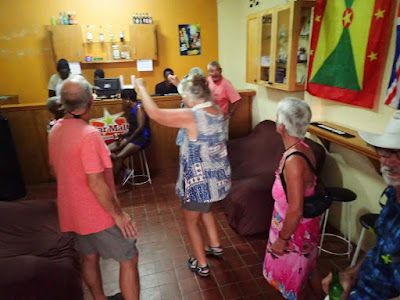 They have two weeks left to rehearse, but they sound great to me!  Music practice began to wind down so we all wandered back to the little bar.  Shademan's van was gone, so we went inside and ordered drinks.  The offerings for non-beer choices were few, but I settled on some Ting with a shot of rum.  Somehow the question was asked and answered, and I found myself in possession of a healthy swig of Babash! (Whoops!)  I mixed my rum with Ting in a glass of ice and the party got started while we waited for the cook to call us to dinner!
Shademan returned to check on us and we realized that we hadn't seen the costume place yet.  He asked us why we didn't go!  Well because we have no idea where it is!!!  He pointed us back up the road past the schoolyard and we set off to follow his vague instructions.  We weren't sure we were supposed to follow this narrow path, but it ended well and we found the workroom where the ladies were just getting started. 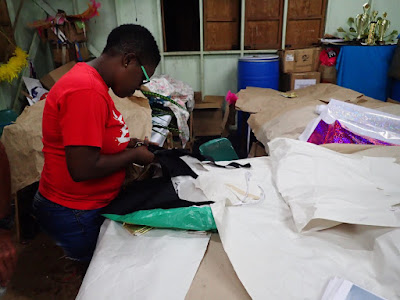 We walked into a workroom that was littered with pieces and scraps and frills and feathers.  There were a couple of ladies cutting some material and a couple of others having a discussion about a costume.  We thanked them and remarked about the lateness of the hour!  They told us that it was early as they were just coming to work.  They have day jobs and then come here to work late into the night to get the costumes made. 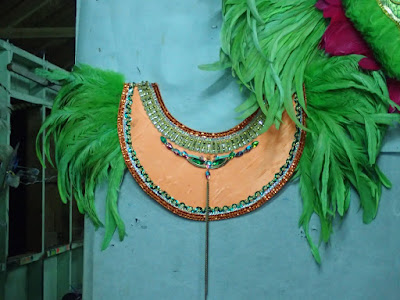 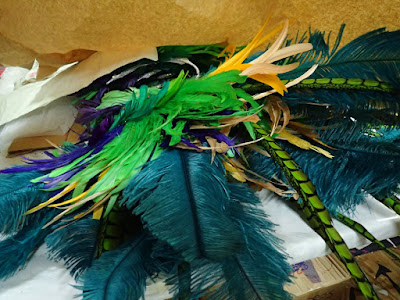 Anyone on the island, including US, could commission a costume.  Parts and designs are ordered from Trinidad, but the bulk of the work is done in rooms like this one all over the island.  Everything is made by hand and we only saw one old sewing machine buried in the fluff.  There is some secrecy and of course, the delicate costumes must be protected from damage, so most were covered from view.  We did peek beneath the sheets and found piles of colorful feathers!
Another room held some finished parts, and we found a man working in a third room who told us a little more about the process.  The women sew and create, while the men are responsible for making the metal frames that support the wild costumes. 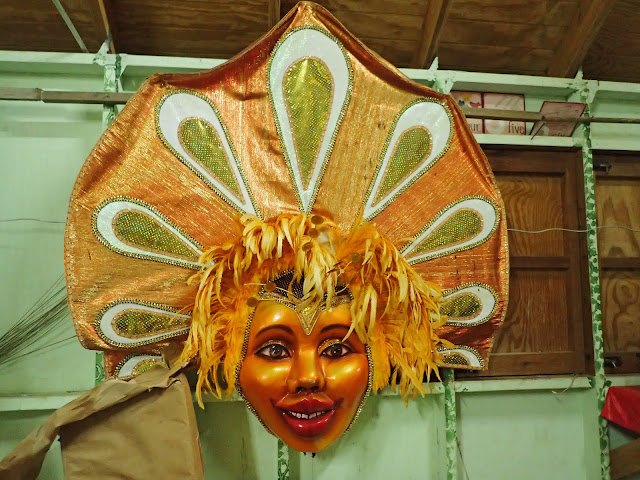 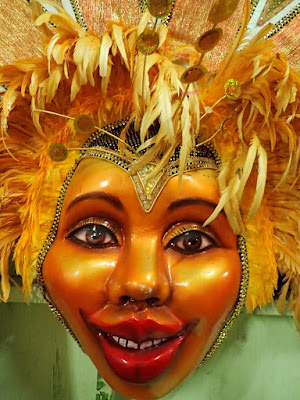 We said our goodbyes and left, maybe just a little disappointed that we hadn't seen pretty girls decked in feathers, but with a new interest in Carnival.  If we want to see these costumes in full glory, we'll just have to participate in the events!

Leaving the costumers to their work, we went back out into the night.  We high-stepped through dewy grass and flopped back down the steep hill, and I looked up at the misty moon.  An eerie light shone on the tropical plants on the roadside, coqui frogs serenaded our progress in the warm, balmy air.  As happens sometimes, I was struck with the randomness of this moment.  We are in the heart of the island and feel safe and welcome by these lovely people.  Cruising life is good. 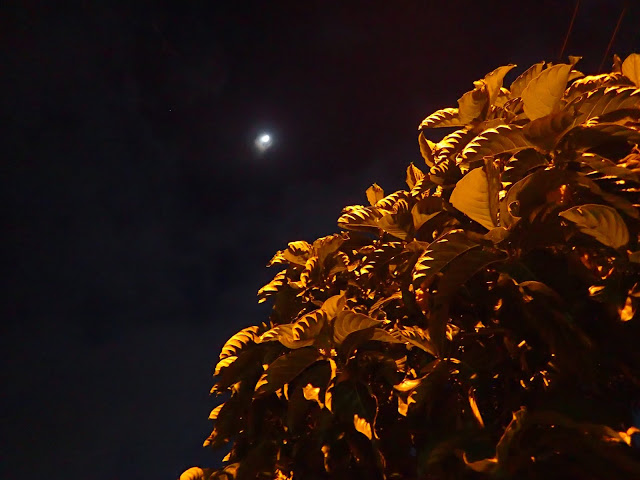 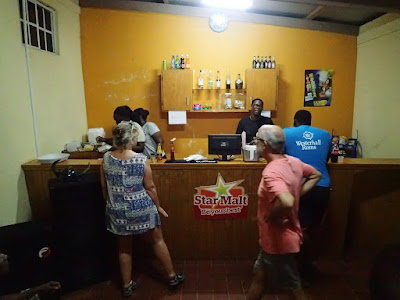 Coqui song was gradually replaced by the thumping rhythm of larger-than-necessary speakers back in our little bar.  We passed from the fresh air outside into the frenzied warmth inside and found diminutive Mary welcoming us once again with a wiggle.  She literally took us into her arms and wouldn't let go until our movements matched hers!  She was MAKING us dance! 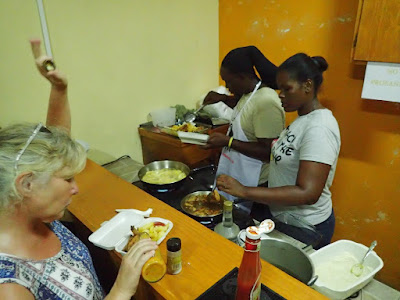 We took temporary refuge in the dinner line!  Lloyd was done with the chicken and fries...  We picked up our boxes and found our spot at the little bar that lined the room with a window open to the night air.

This might not qualify as an appropriately posh celebratory dinner by most standards, but the randomness, the adventure, the not-knowing-what-comes-next factor of it made it perfect.  The fact that I can be happy with two scrawny chicken wings, a pile of fries, and some questionable (possibly dangerous) concoction to drink, attests to the many ways in which leaving a former life behind and embracing the adventure can change a person.  My standards have definitely changed... but it is a good thing!

While Bruce and I were eating, the party was ramping up all around us.  The music got louder and it was impossible to resist Mary as she drew everyone in the room into the fray! It's been a long time since I've danced.  I don't know why.  But I could feel my stiff bones beginning to melt a little as the rum infused my insides, and the warmth of the night melted me outside.

This entire party did not exist prior to my question to Shademan about what we were having for dinner.  He called these people to ask if they would cook for us....and that's how it all began.  Little did any of us know that it would turn into an all-out-PARTY!  The faces of the Locals bore indulgent smiles as they danced right along with us and took video of the silly white people trying to dance!  But you know what? The fact that we don't have "moves" did not matter at all.  We all melted together and gyrated and sweated and sang to the music with these sweet people!  Yes... EVEN BRUCE!  It was a hoot and the pics and videos just don't do it justice.


We danced and danced, and people kept showing up and joining in.  A skinny little boy arrived and took the floor with flailing arms that we could not mimic with our old bones!  He was the cutest little thing!  The guy who did the cooking, Lloyd, came around to all of us to thank us for coming and to invite us to a Jump-Up they were having on Sunday.  I felt that was the most sincere welcome we could wish for... they wanted us to come back!

The party could have gone on all night, but we were pouring sweat and our tired bodies were beginning to feel the unaccustomed strain!  We were up WAY beyond Cruiser's Midnight!  Bruce and I paid our tab and went out into the cooling breeze to dry off while the others got the silent memo and paid their tabs...  Lloyd once again invited us to come back, but we're Cruisers and it's difficult for us to commit four days out!

What a wonderful surprise this has been.  There's no way we could have anticipated the way this night would play out, but the joy and camaraderie was the perfect way to spend our special evening.  I wonder how we'll spend our NEXT anniversary...  Well whatever we end up doing... Let there be DANCING!