Moving on to the second full day of this installation of "Other People's Vacation Pics" - we take you to the historic Fort George.  We spent much of the cool hours of our morning renewing our tourists visa, but once we were cleared to remain in Grenada, we jumped back onto one of the public bus/vans.  The warmth of the sun convinced us that the $1.85 US for bus fare (for all four of us!) was a necessary expenditure.  We had a long day ahead of us! 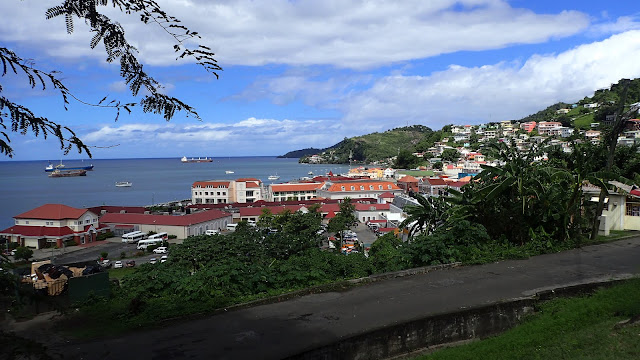 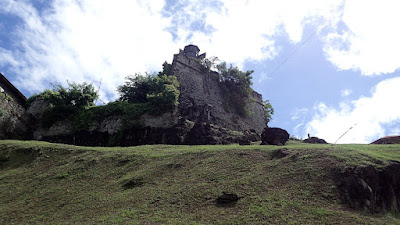 We got off the bus in downtown St. Georges and headed for the fort.  There's no way to miss it really, it's the big pile of rocks on top of the hill!
We eventually reached the small kiosk where the pitiful entry fee of $2 US per person was collected.  I guess on Cruise Ship Days the Fort is more busy, but not today.  We had the place all to ourselves! (another perk of cruising) 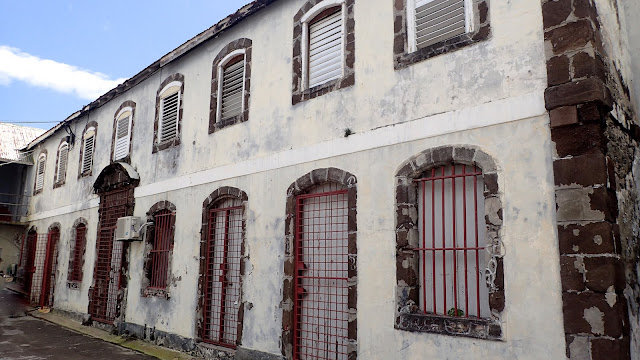 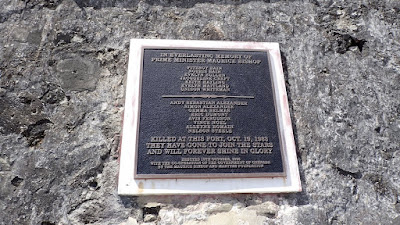 Fort George was built from 1706 - 1710, on an early battery erected by the French in the 1600s, and originally named Fort Royal, it was renamed Fort George in 1763, in honour of King George III when the British took possession of the island, Consequently, 2006 - 2010 would be its 300th anniversary.

I'm amazed that these structures can withstand the passage of time and the ravages of storms - even hurricanes - that have rolled over this hill since the Fort was originally built.  Much of the damage to these structures occurred in 2004 during Hurricane Ivan.  The island of Grenada doesn't see many fierce storms due to it's low latitude, but sometimes they do come... and when they do, the damage can be terrible and long-lasting. 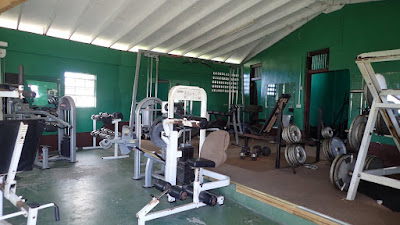 Another thing that amazes me is that the site is so accessible.  The government of Grenada has been unable to raise interest or funds to do much more than barely maintain these historic structures.  Living amongst buildings that are over 300 years old seems to be "normal" for the citizens here.  Take for example, the fact that there is a functioning police headquarters housed where historic battles were once fought.  It's just "business as usual" here!  We peeked into the police weight room and even saw where they kept the shine on their big black boots! 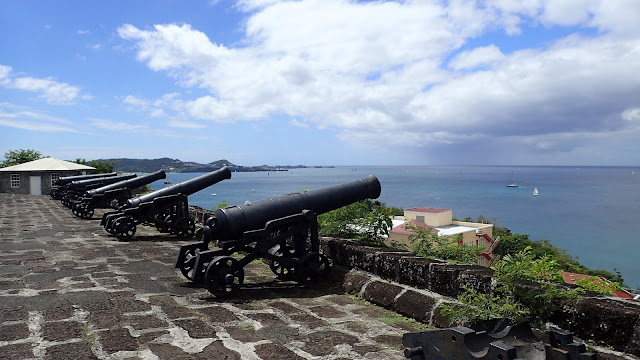 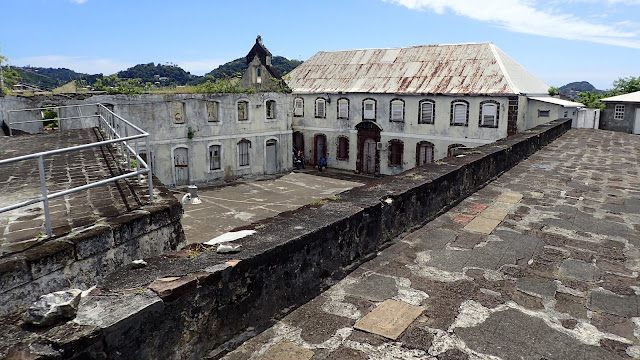 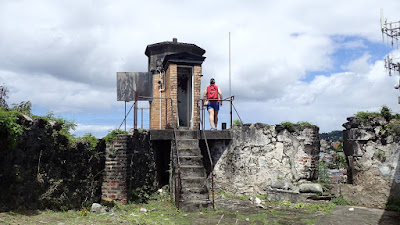 We wandered along the battlements and climbed the short stairway to the old lighthouse.


You know how I love lighthouses!  This one is a sad little thing - no longer in use and fairly crumbling. 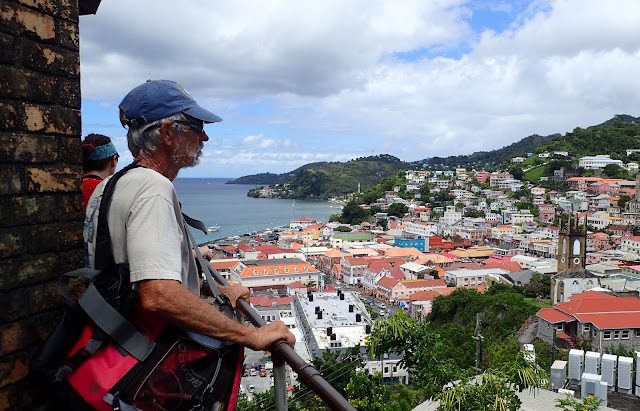 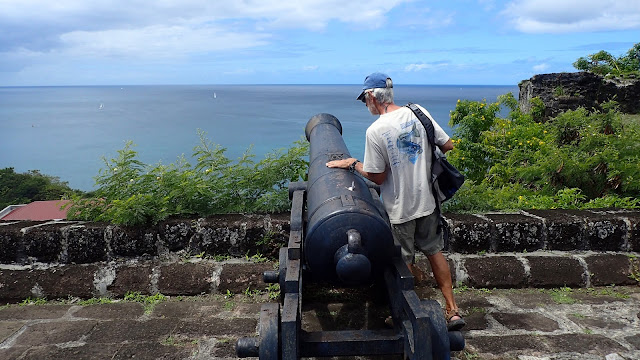 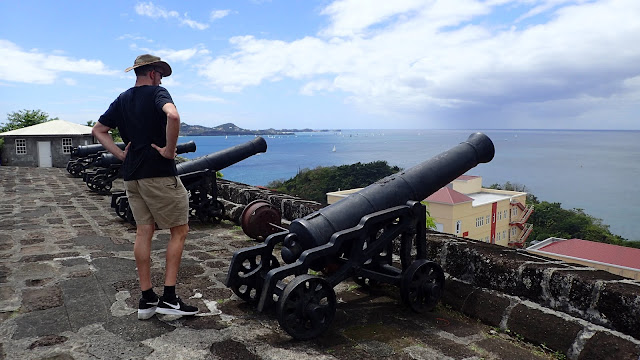 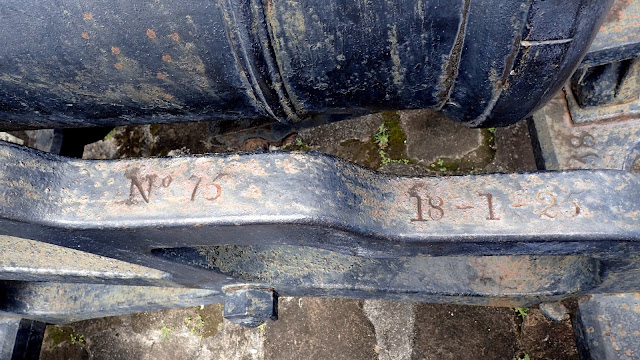 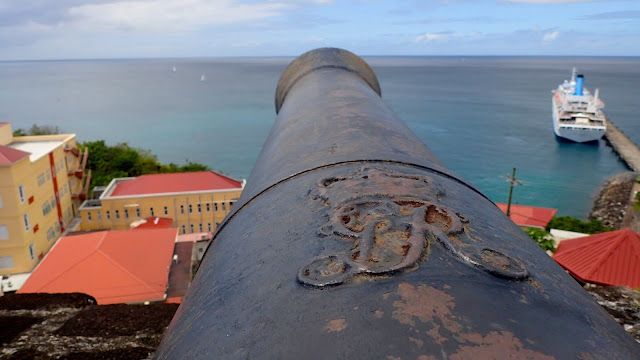 Many of the cannons we've seen throughout the Caribbean have been replicas.  These are actually still used for special occasions!  I would love to see them fired!  But not in the direction they currently aim! 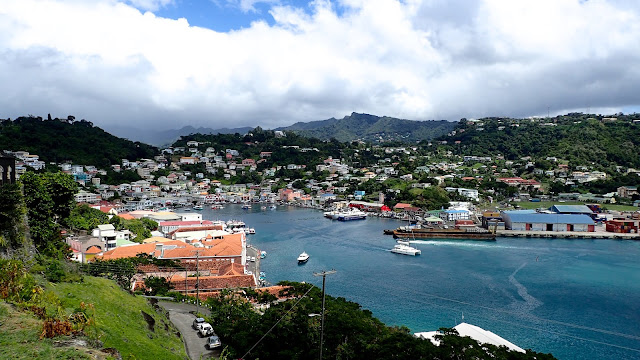 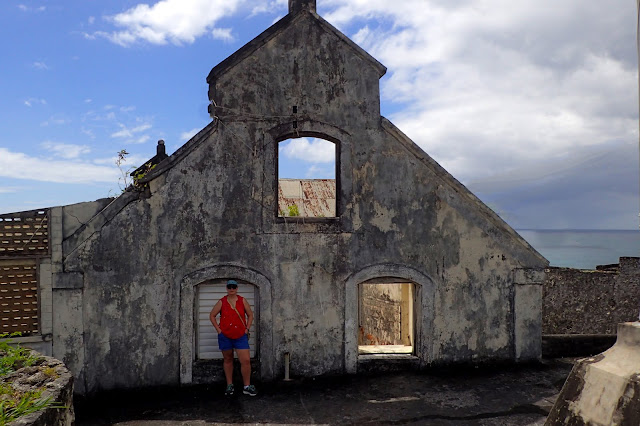 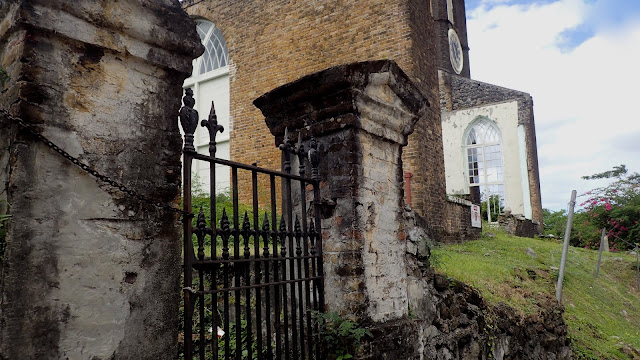 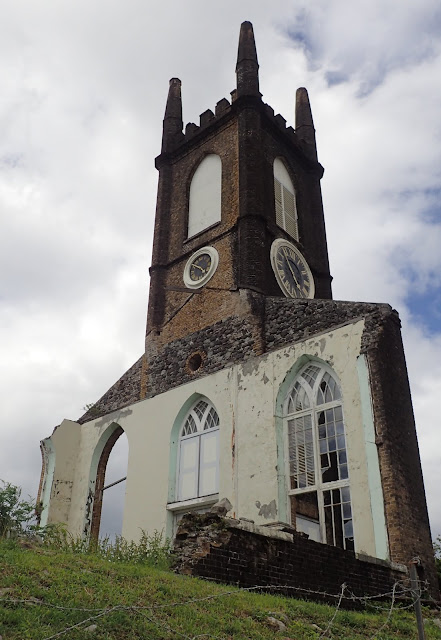 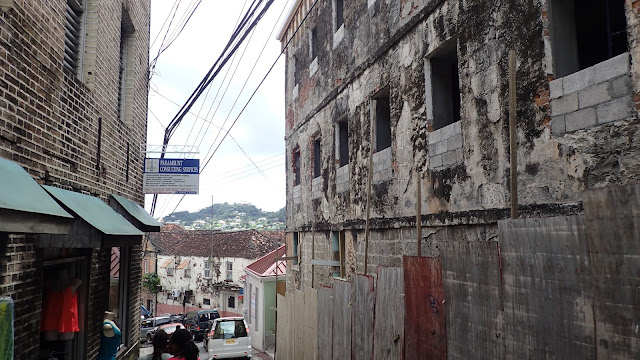 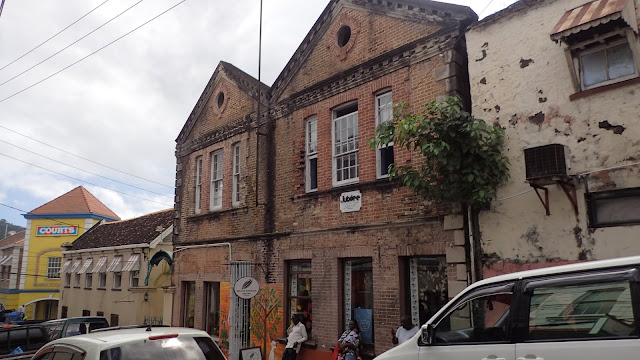 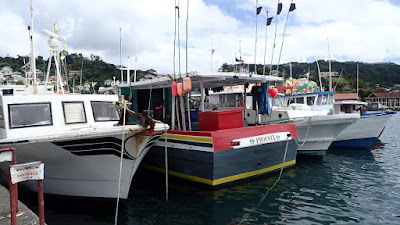 We descended back to sea level by way of the steep and congested streets of the old city.  The continued use of these old buildings is fascinating to me.  In the US they would have been torn down and replaced by steel and glass long ago.

After a quick , no, nothing is quick in the islands... After a ridiculous amount of time spent at the market, we found the bus back to Prickly Bay Marina with our loads of groceries on our laps. 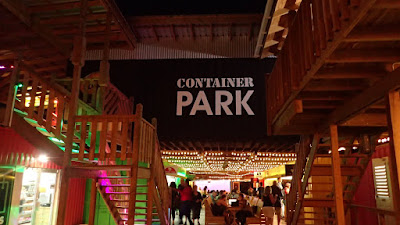 We napped and rested in the warm afternoon, and then hopped aboard Chico's bus for the ride to a nearby hangout called "The Container Park".  Bruce and I have saved this visit so that we could experience it with the kids.

The Container Park is a property lined with shipping containers turned into bars and restaurants.  They've built decks and seating amongst the containers and strings of lights top off the festive mood! It's near the college and lots of college kids hang out here.  There was a game of trivia going on when we were there but it looked like it was already under way so we didn't try to get in. 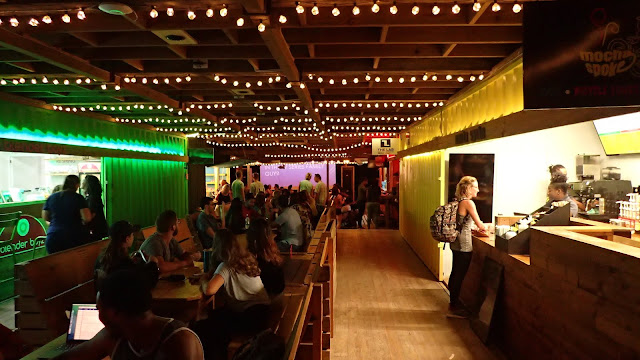 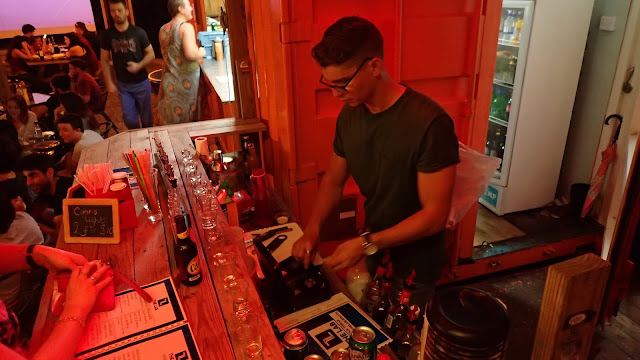 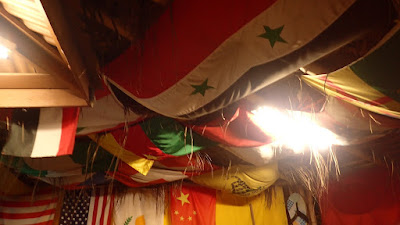 The awesome thing about The Container Park and Options, (the next property over) is that everybody can have something different.  We strolled through the many vendors with drinks in hand until each of us had found something to entice us.  I had a Schwarma and Bruce got a burger.  The kids had something else entirely and our vegetarian friends found something to suit their appetite.  Then we all sat together at one of the many tables scattered around, and listened to the music and people sounds around us.


Our bodies and feet were REALLY tired from all the walking today, but this was the perfect ending to another fun day exploring Grenada.

We filled our bellies then joined Chico at the drop-off point for our bus ride back through the darkened streets of Grenada!  Stay tuned for another exciting day of Other People's Vacation Pics coming to the blog soon!
SaveSave
SaveSave