Drinkin' Under The Counter

We've been very quiet lately.  After the holidays came and went - rather uneventfully - I was a little down.  I missed the kids.  But there was a silver lining in my future... My daughter Melissa was gifted plane tickets to see me for Christmas from her husband Michael!  Of course he came along too!

Bruce and I worked diligently from the moment I found out they were coming to have everything ready on the boat, and I made sure we had a full itinerary with lots of choices for things to see and do while they were here!

So, without further ado, I present you Other People's Vacation Pics Day One - The Under-The-Counter Rum tour!

First let me explain what we're looking for.  Our driver - Patrick (aka Shade Man) - makes his living driving Cruisers and other visitors around the island.  Anything we wish to do, he makes it happen.  There is a special rum that the Locals drink on Grenada and they call it Under-The-Counter.


It's called that because it's not displayed above the bar or on any menu.  It's a well-known-secret drink that the local's (and now we) know and love.  Well... maybe we don't love it THAT much!

UTC is a very raw, high proof white rum made locally.  It's everywhere and it's cheap.  But each little bar seems to take pride in making it unique by adding varying spices, fruits and whatever else, that are grown on the island.  The added ingredients give the rum a spicy flavor that is completely different from bar to bar.

There's no way we could visit all of these little establishments, but we did the best we could!  We dove right in with a tour of the island punctuated by little glimpses of island life that you can't get by visiting on a Cruise Ship!

The four of us joined three other Cruisers to round out our small cozy group.  Patrick's van was in the shop so he had another driver taking us through all of the little villages and towns while Shade Man told us some of the history and anecdotes about the places we saw whizzing by our windows.

As we went from shop to shop - the van would stop - Patrick would jump out of the van and run inside to inquire about their Under-The-Counter.  Some shops didn't have any so we resumed our search.

But when Patrick found a little place that had some, he waived us all to come join him for a wee pour.

We got some suspicious glances from some of the Locals, but most of them welcomed us warmly as they produced their big jug-o-rum filled with all sorts of sticks and leaves.  Next, out comes a stack of tiny cups and a big bottle of water, cold from the fridge.

The rum is so harsh that it has to be chased immediately by the cold water to keep it from doing any damage as it goes down.  Even WITH the water, my throat began to feel sore as the day wore on and we sipped one after another of this island specialty. 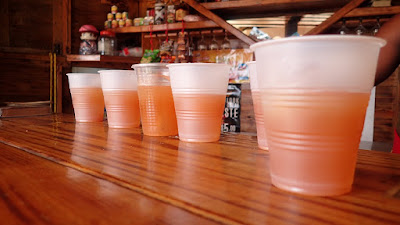 Our third successful stop almost wasn't!  We pulled up to the Bumpy Corner Bar only to find all the windows were boarded up!

Patrick knocked on the door of the house next to the bar and convinced the proprietor to open up just for us!

She was in the middle of making dinner but she served their special rum punch concoction with a smile as we all milled around, sipping our spicy rum punches mixed right here in this tiny but upscale neighborhood bar!

All of the little sips of Under-The-Counter hadn't done much to make us tipsy, but the rum punches at the Bumpy Corner caught us up to speed.  We waved goodbye with many thanks and loaded up the van once again to fly off to our next stop in the tiny village of Sea Moon.  I KNOW!  Sea Moon!

The nice lady at Roxy's Bar in Sea Moon served us up our next little drink - amazingly different from the others.  This one was a little more sweet and I liked it the best of all - so far!

The other patrons at Roxy's were very nice.  One lady struck up a conversation with all of us and she was very welcoming.  It's nice to feel that way and we find it throughout the island, even when we get off the tourist path like we are today! 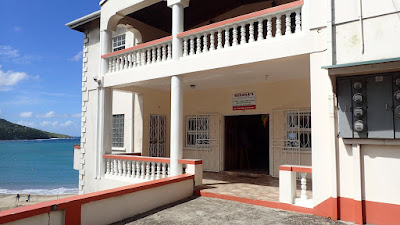 By this time it was after noon and we were all getting pretty hungry.  There's no way we could continue this rum-fest without something solid in our tummies!  Shade Man made a quick phone call and got us the best tables in the house at Helena's near Leaper's Hill in Sauteurs. 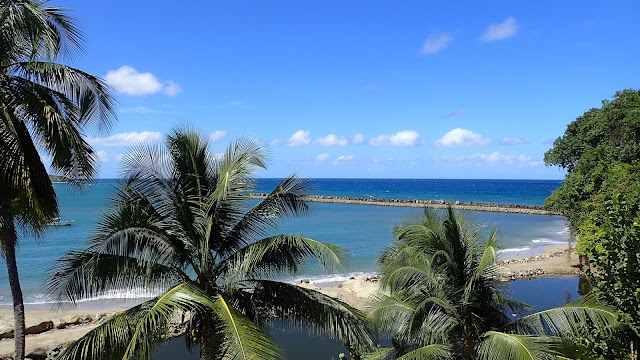 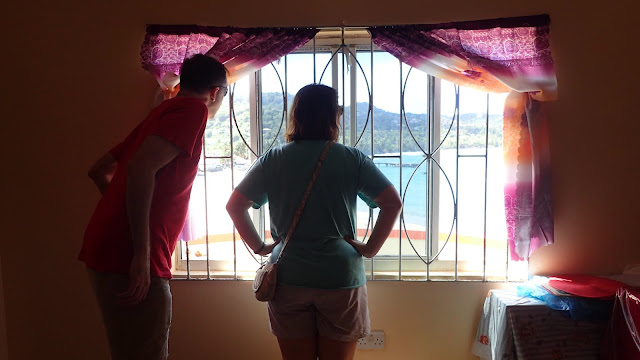 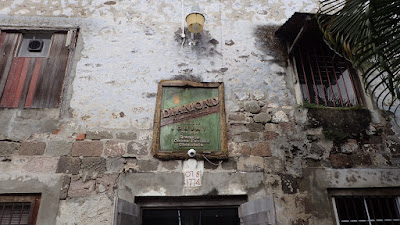 The best thing about touring with a small group is that we're more flexible and can take a zag off script.  When Patrick asked us if we wanted to tour the Diamond Chocolate Factory where Jouvay brand chocolate is produced, we said YES of course!

This day just kept getting better and better! 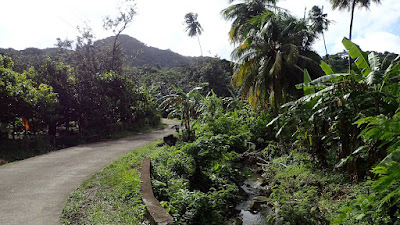 Bruce and I have been to the Grenada Chocolate Factory on a previous tour and wondered what we could learn from this place.  But the two businesses are very different from one another and if I had to pic a favorite - it would have to be Diamond! 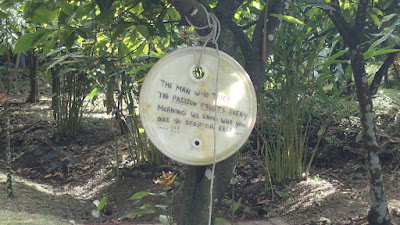 We began with a walk beneath the cocoa trees where Jacinta told us all about the process, from growing, to harvesting to processing the beans.

The property is beautifully maintained and we got to see some of the other tropical plants identified here as well. 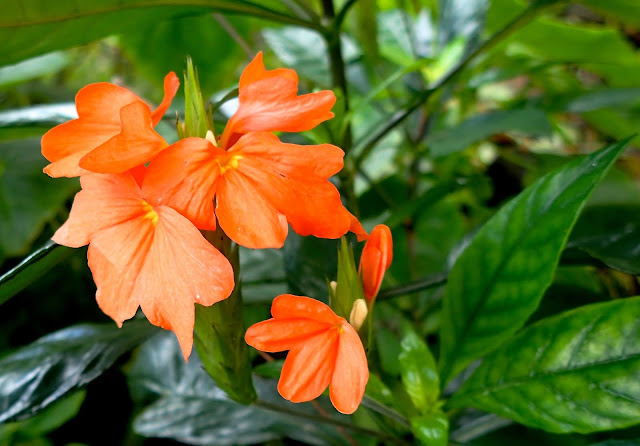 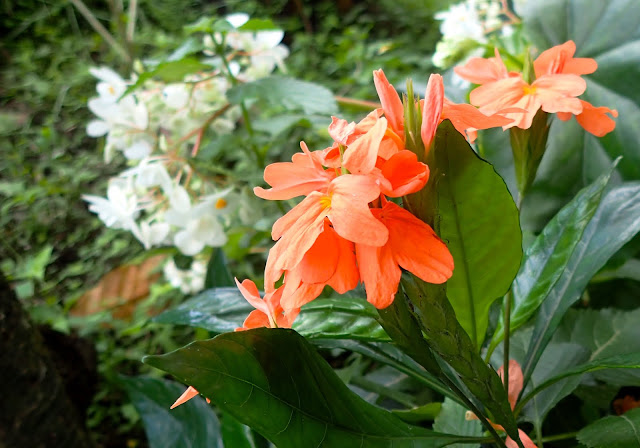 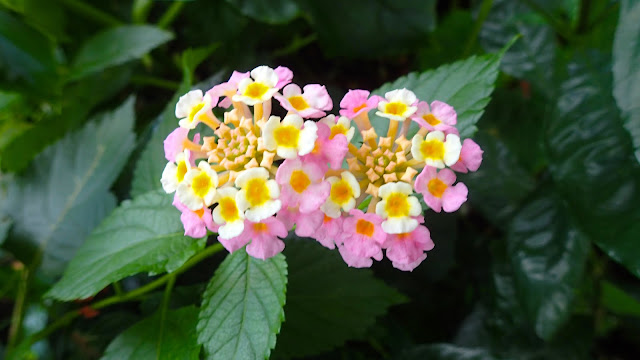 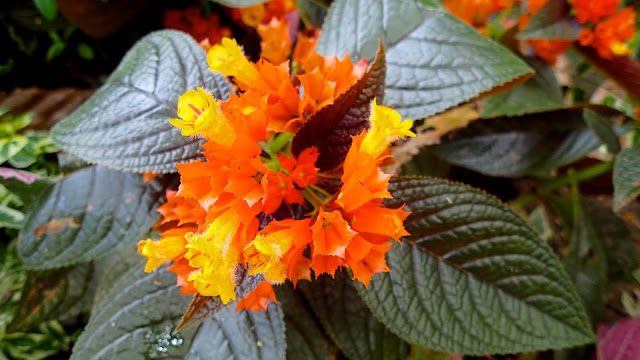 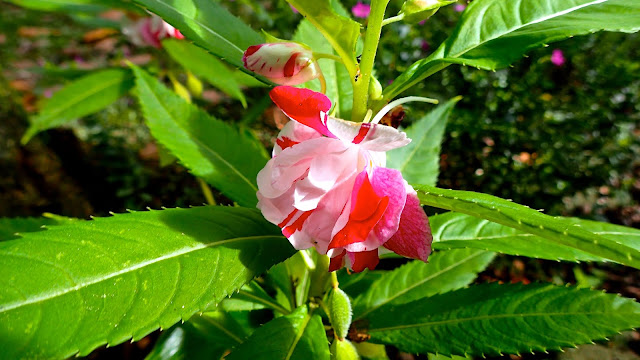 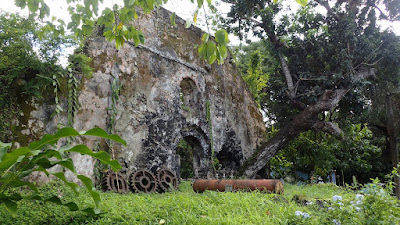 Present day machinery is housed inside a very old building that was once used as part of a sugar plantation.  There's an abandoned mill ruin on the property that provides a peaceful place to walk and feel the history of the island. 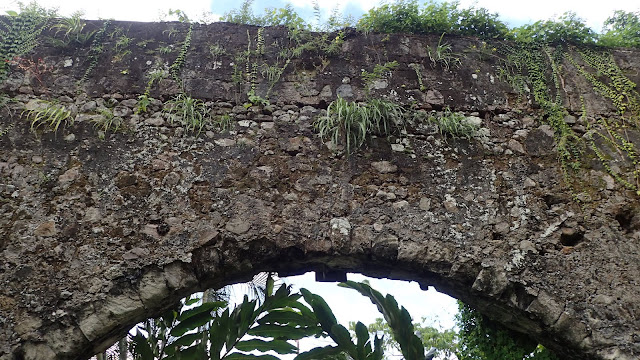 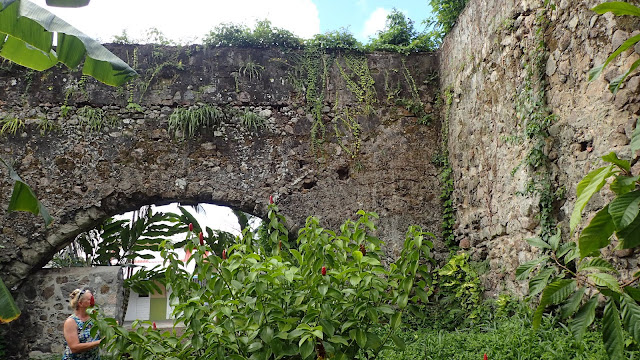 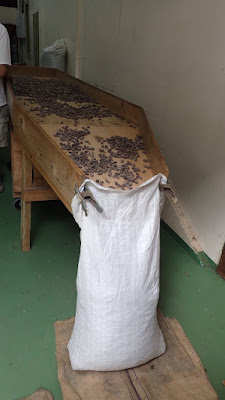 After we'd seen everything outside, Jacinta brought us into the processing room.

There weren't any beans fermenting so we didn't get to see that part, but there were sacks of dried beans being sorted and separated according to size. 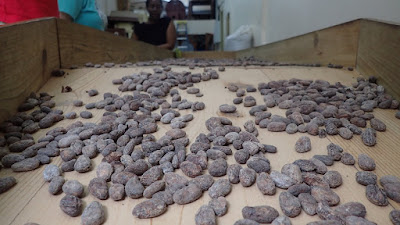 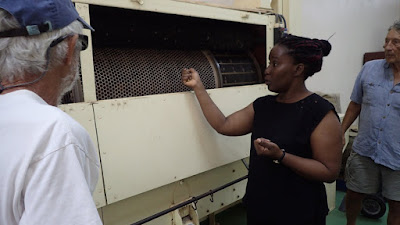 Jacinta explained to us how they use these machines to sort the beans by size, AND to remove rocks and other impurities from the harvest. 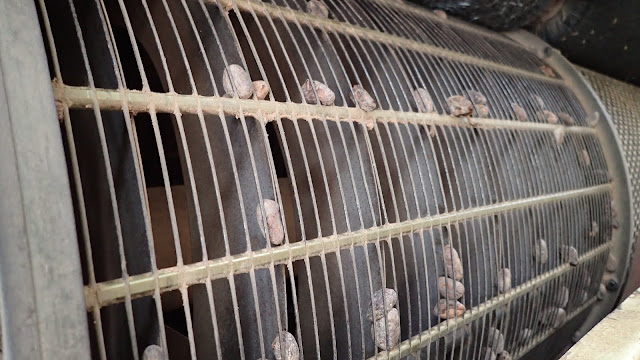 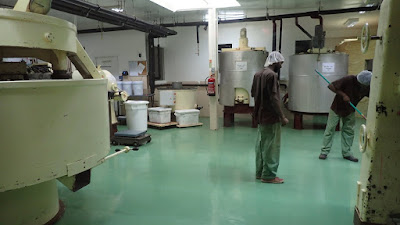 We caught the men in the room where the magic happens just as they were cleaning up for the afternoon.  Their work was done but we got to peer through the viewing glass at the machines that grind the cocoa into the smooth, dreamy chocolate that we would soon get to taste!

This factory seemed to be a bit more concerned about the purity of their product and even though production was done inside a very old building, the attention to cleanliness was obvious. 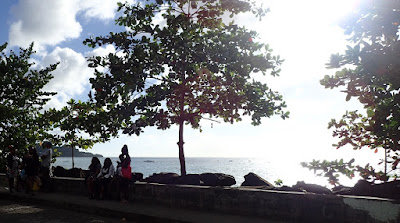 Smelling of chocolate after having slathered cocoa butter on ourselves, we loaded back into the van to be whisked down the western coast of Grenada.  The hour was growing late and the streets were lined with people limin' after their work was done. 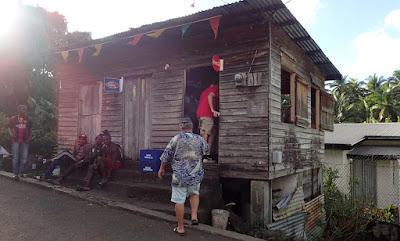 Our last rum stop of the day was Dorrel's Bar in the village of Grand Roy.

By this time we had this thing figured out.  While none of the samples we'd tested had been exactly the same, they all had the same basic ingredients in them. 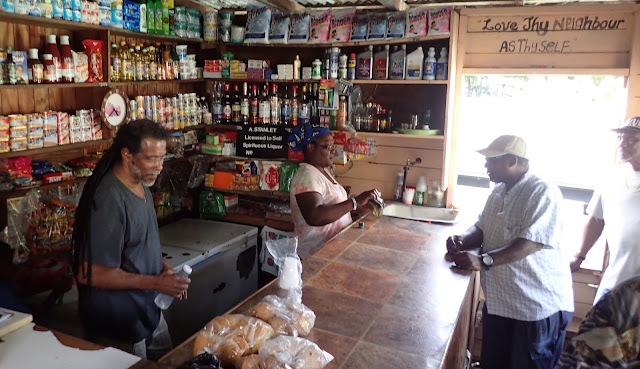 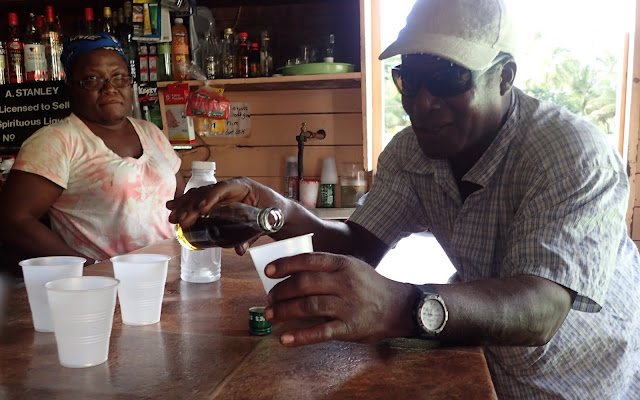 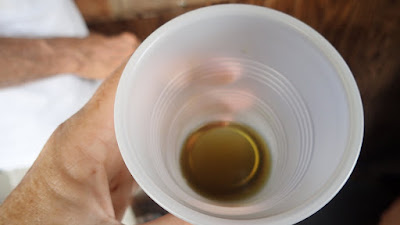 Until now.  Dorrel had his own secret recipe that used green leaves, including mint!  Using green leaves instead of dried ones gave the Under-The-Counter produce sort of a green tint.  AND he just happened to have started a brand new batch today!  You could smell the mint in the room and this UTC was the tiniest bit smoother than the others we had experienced.  That or maybe the lining of our throats was cauterized... I'm not sure which. 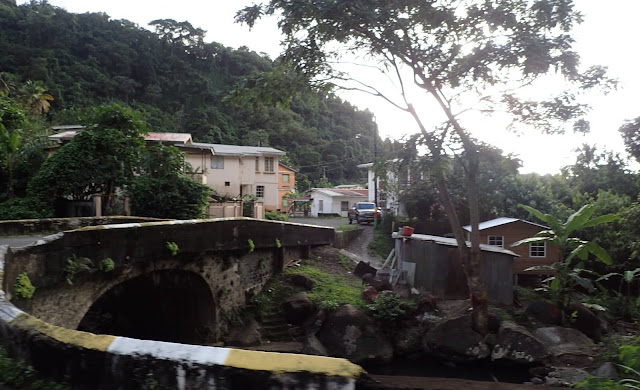 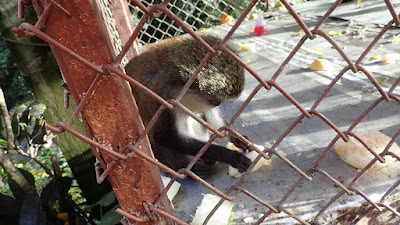 A person can only take so much rum in a day and at this point we were all pretty much done!  It was still early enough for us to take a quick detour to see Concord Falls - since nobody seemed interested in continuing our search for Under-The-Counter.

Bruce and I have seen the falls but checking Concord off of our to-do list for the kids today, would leave us more time to see something else on our full-day tour scheduled for Monday.  Plus, the monkeys are the real reason my son-in-law wanted to visit us here in Grenada!  And there was a small Mona Monkey just having his dinner for us to see! Watching him eat the fruit with his tiny hands was fascinating!

What a perfect ending to a full day or island touring.  The search for Under-The-Counter provided us excitement and a goal, plus it gave the kids a taste of island life that only a lucky few are able to experience.  And for me?  Well, I LOVE seeing my island life through the eyes of my daughter and I can't wait to continue our adventures!  Stay tuned for the next installment of Other-People's-Vacation-Pics