These Grenadines Are Mine 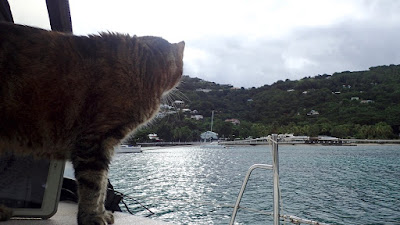 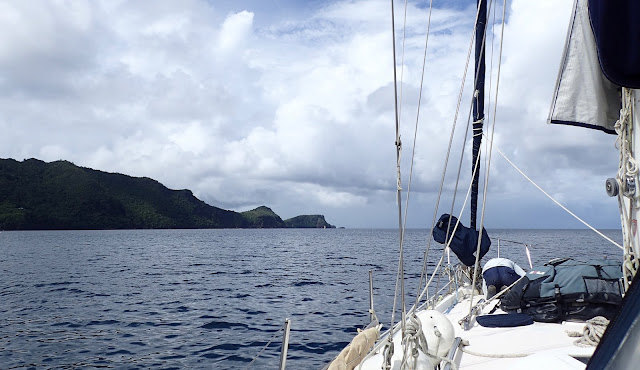 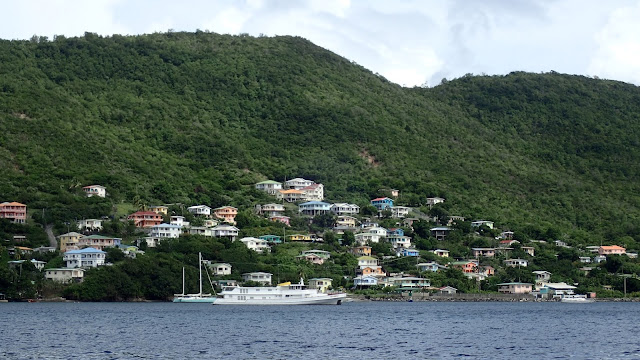 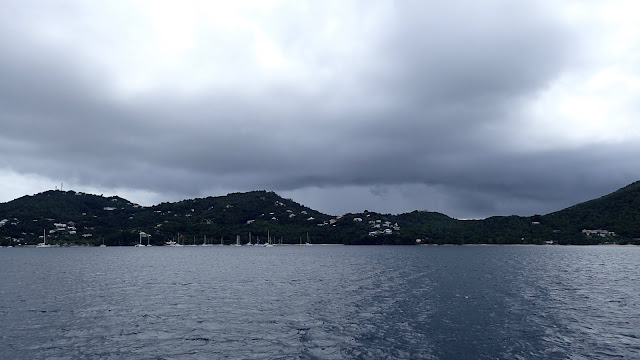 After delaying our departure for several days looking for better conditions, we finally took up our anchor about mid-morning and motored toward the furthest point of Bequia, West Cay. The skies were sunny with puffy white clouds… until we were fully committed to leaving. Suddenly the dark cloud that had been hiding behind the hills Bequia…pounced with a gust of 24 knots and a steady rain. 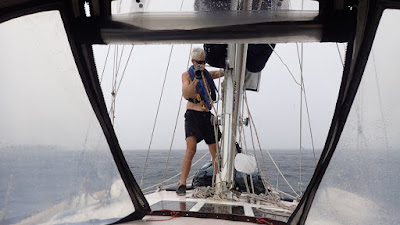 For a while there we thought that maybe the squall would pass behind us as it was moving NW and we poured on the power going southwest… But eventually the wall of rain overtook us. It wasn’t bad, just a moment of wind from behind, pushing us along actually. The rain settled into a steady cleansing event that pretty much soaked everything… then it passed, leaving dramatically cloudy skies and distant rain curtains for our entertainment. 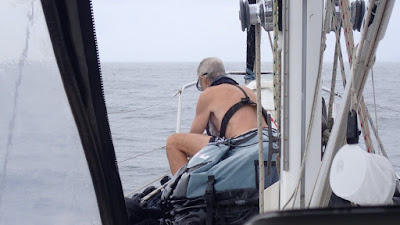 Just before we left the protection of Bequia, we raised the mainsail, double reefed just in case. We turned south headed for Canouan in surprisingly light winds and seas. Bruce was busy on the foredeck preparing the small blade sail when I shouted up to him “Hey, I think we need to run the big jib!”.

These words came at the precise moment he finished tying on the small sail. Admirably, he looked around… then agreed, and began to undo all of his work. It was OK… we would be ready if conditions warranted the change to the smaller sail… We rolled out the big jib full on and settled into mortorsailing, once again. We throttled back, but even after shaking out the reefs in the mainsail, we weren’t going fast enough to make it to the anchorage on Canouan in good time. OK then… we’ll make some more water! 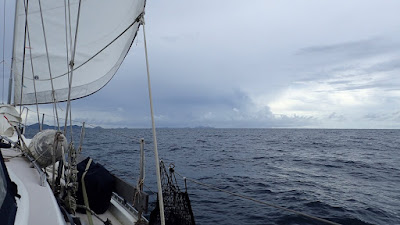 Winds were just a bit south of east, making our point of sail less on the beam than we had hoped and more of a going-to-weather type thing… But it was so light, maybe 8-12 knots with the occasional gust to 16… Seas were choppy and confused but small. We trimmed sails and relaxed to watch the ever-changing cloud configurations all around us. It was raining everywhere… except here! 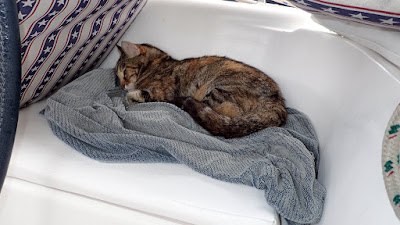 Throughout all of this, Jezabelle napped on, she’s our sweet sailor kitty. She’s only been seasick once, the day we left Marigot back several weeks ago. When we get final preparations to depart our anchorage, I go into the aft cabin and tell her it’s time to go… She looks around as if gauging her chances of avoiding my order… Briefly vocalising her protest… she grudgingly hops off of the bed and trudges to the stairs… She hops up and goes immediately to the little nest we make for her. There she remains with the exception of one or two trips to the kibble pan… until she feels the settling of motion that comes as we enter our anchorage. She’s a pro!

Seas were a lot better than I expected them to be and I looked to the east to see why. The islands there form a protective barrier to dampen the ocean swell along this route until the very end… Contrary to my expectations, just before we reached Canouan, the sloppy waves smoothed out! 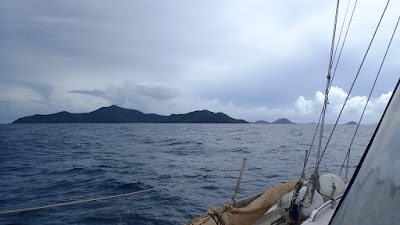 And then we entered the area just at the northern point of Canouan where seas became huge!

The spot is marked on the chart plotter chart as being large and confused… Large we got, but the waves were relatively orderly as they marched up our backside. I altered course to find a smooth motion and we just let these big (sort of fun) rollers carry us on until we noticed a slight decrease. Then we turned back to the SE and ran for the lee of the island. 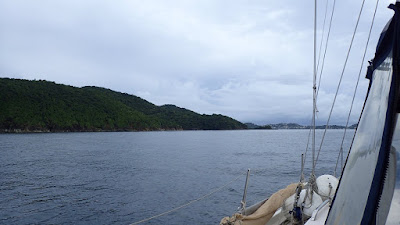 We dropped sails as we crossed the line where the water went from ruffled with breeze… to almost glassy. Following the shoreline on an undulating skein of silken blue, we rounded the point that stops the swell from entering the Little Bay at Rameau. 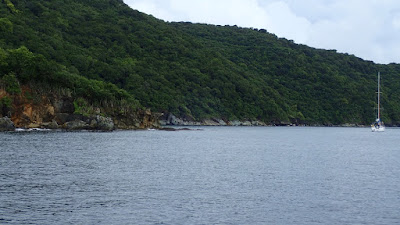 There was one day charter there, snorkelling the point… We made our extensive exploration of the coast, checking for depths and marking the perimeter of our safe zone… then we went to the middle of our field and began looking for a sandy spot. 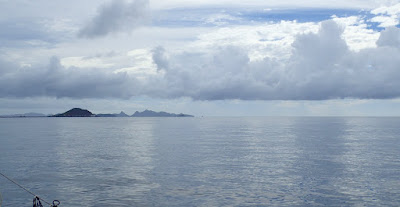 We found a huge light-coloured spot of sand in the weedy bed in the perfect position and dropped anchor in about 20 ft. depth. We took our time getting set with ominous caution from Doyle’s guide playing on repeat in my mind. Seeing no reason to place two anchors… there was plenty of swing room and a lot of sand in our patch for the anchor to reset if we reversed. Bruce swam out to check and gave the thumb’s up! The anchor was buried and we were home! 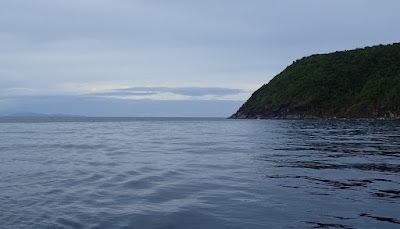 Looking around us, we grew more and more delighted with our circumstances. There is a nice place to snorkel on the point to our west and a sweet little crescent beach to stroll… There might even be shells! 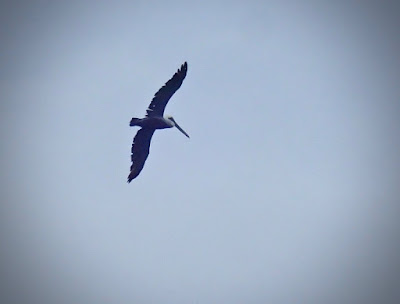 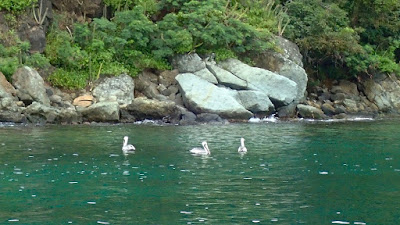 The birds, Boobies and Pelicans performed a non-stop aerobatics demonstration… the fish must be plentiful here if bird activity is any indication. Standing on deck looking down into the water was mesmerising… a feeling of well-being infused my body. I think we’re going to like it here. Plans to stop briefly for one night and move on melted away… we’re going to stay another night.. we already know it. 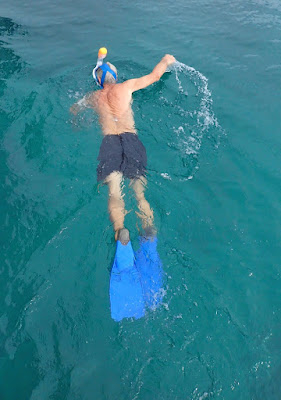 There's one more duty that must be done before we relax.  Bruce swam out to do a visual check of the anchor set.  This anchorage is reported to be swirly and we sleep much more easily if we know it's set! 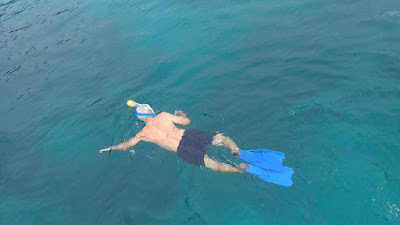 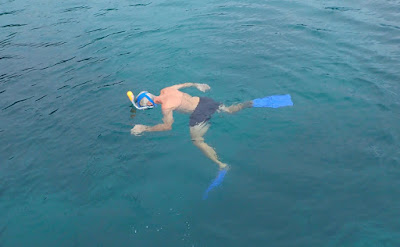 I stood on deck in the breeze, gazing all around me. I gained perspective of the islands, superimposing the image in my mind from the charts to real life. Union Island is an icon with it’s pointy hill… and it’s just over there. Everything is small. The next two weeks can pretty much be spent doing whatever we want as it won’t be difficult to get from any one of these islands to nearby Carriacou for clearance into Grenada waters. 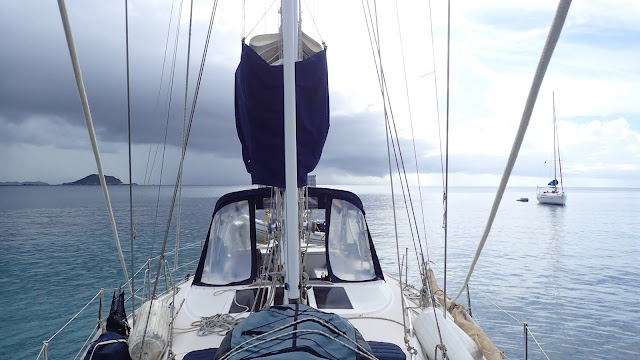 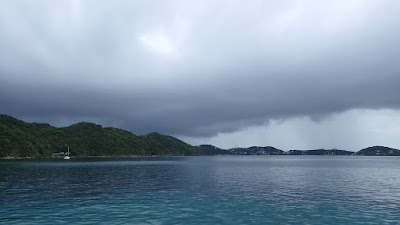 The sun was lowering and the rain to our south seemed like it would miss us… But the dark cloud spread and grew to our southeast, rising over the hill and overtaking us. The rain made a relentless advancing line on the water as it veiled the anchorage off Charlestown and I dashed below to don my swimsuit and grab some soap and shampoo!

Bruce was down below having a proper hot (we had run the engine thus heating water) shower after his swim… I grabbed a bucket! I leaned far over the port side to allow the skipper drains to fill my bucket to half full… then I soaped my hair! There is something wondrous about sitting on the deck in the pouring rain soaping one’s hair! So freeing! I poured my bucket over my head in stages to rinse the shampoo, then grabbed that bar of soap! I must say that I was pretty stinky! I lathered up right there on the aft deck, filling the bucket about a third twice more before I was done soaping and rinsing with sweet rainwater. For some reason I was not cold. The rain felt perfect on my skin. It was wild. It was simple. I felt like Mother Earth! Corny, I know… but it was an awesome moment and with no photos, I want to remember it well. 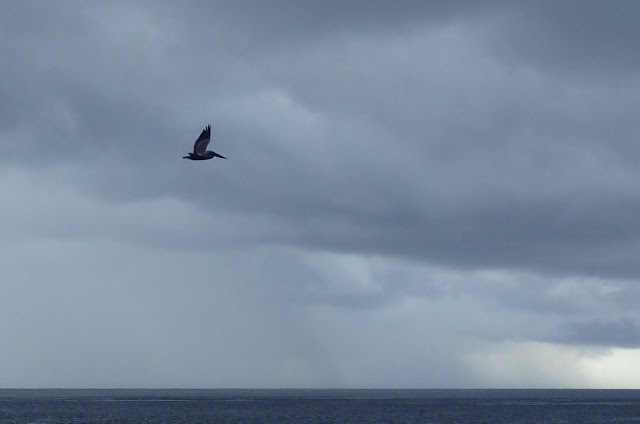 I was laying on the deck in the rain when Bruce came back up. He grinned like a Guy when I told him I had showered on deck. He asked if I got all the soap off and I looked at my boob… nope, there’s a little soap there. I started to take off my top then looked around… My eyes settled on two guys on the rock.. I wonder if they got a show when I was soapin’ it up… Maybe they didn’t look. Bruce laughed and said “No normal guy would NOT look when they saw a woman bathing in the rain!”. Well, maybe I would never meet them in person… I stripped my swimsuit off, leaving it to rinse in the dwindling rain and going below to dry off and put on dry clothes.

The rain continued and we retired down below to prepare some supper. I sliced up some cabbage and carrots for tomorrow… trying that stewed port we had at the “Like It” Bar back in Marigot. Dinner tonight was a fresh salad from some things we picked up in Bequia’s market, and a chicken leg quarter. It rivalled Jason’s Deli (a place we frequented back home) with the exception of the rather stringy local chicken… 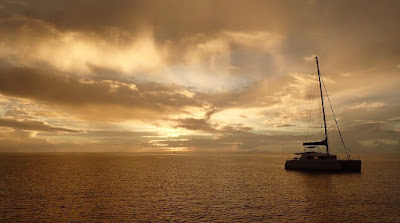 After dinner (early because we skipped lunch on the sail over here) I went back out to see what kind of Sunset was offered. The barest of sprinkles did not deter me from standing out there like a fool as the wonders of heaven opened up before my eyes. Rainy days make the BEST Sunsets. The arrival of a charter cat placed just in my Sunset was only a mild irritant… they are only here for a week… Let them have this Sunset… For as long as I choose… These Grenadines are MINE! 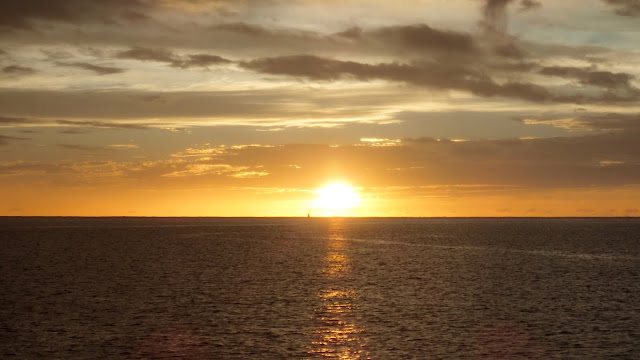 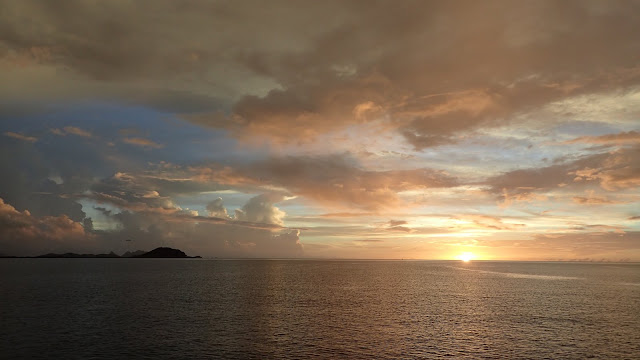 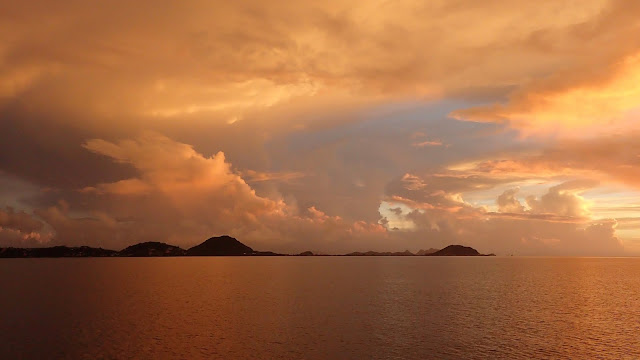 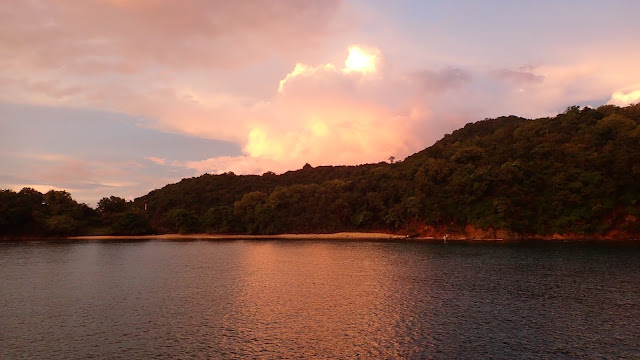 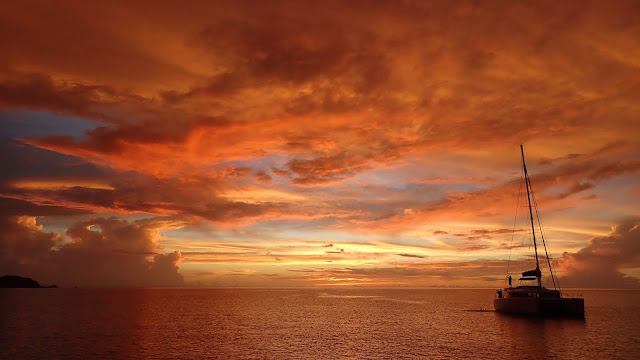 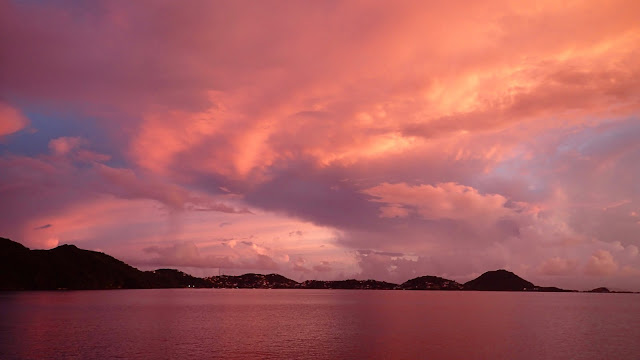