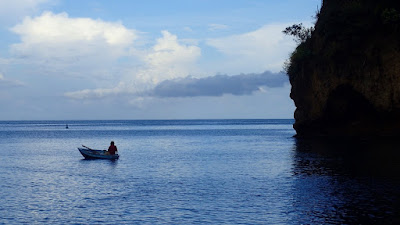 We LOVE it here! We understand that what we’re experiencing is not real. The people we’ve met here in St. Vincent have gone out of their way to treat us like Royalty… HOW could it be real??

We have a month to spend here in St. Vincent and the Grenadines. Cumberland is such a Paradise… we are in no hurry to leave. The bay is calm and the breeze cools us. Our basic needs are met and the hours roll out before us to fill as we like. 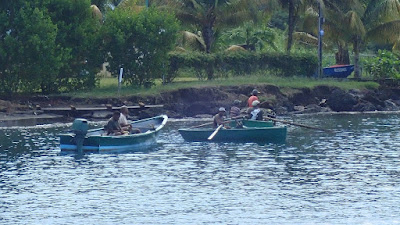 Taking advantage of the calm anchorage, we took a day to do some cleaning and maintenance. It’s so much easier to fiddle around down below when the boat isn’t moving! Bruce was spreading some things from a hanging locker out to dry (air conditioner condensation pan flood) when he called me up to take a look at what was going on in the Bay. 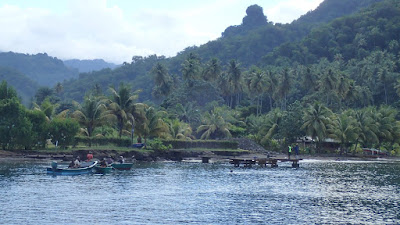 There was a diver in the water with a float tied to his waist. There were fishermen in boats sitting idle nearby… watching. And there were people on the dock who also seemed to be part of the process. We watched as the diver swam around… now and then diving down with a flip and a fin held high in the air that disappeared beneath the surface… He would resurface in a different spot far from where he went down.

Eventually he swam to one of the waiting boats and boarded. We saw that he had a spear gun but saw no sign of any fish… He started up the motor and towed the other boat full of men out. 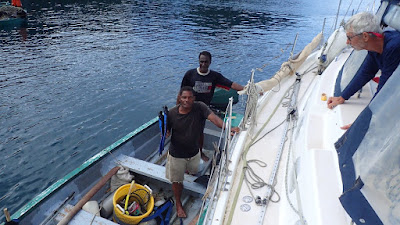 Quickly I asked Bruce if he wanted to give away some of our extra snorkel gear… he disappeared below to dig it out of the v-berth while I hailed the fishermen and waived them over to our side.

Their faces lit up when they heard I was offering them some gear! SURE they would take it!!! We handed down three snorkels and masks to many thanks… THEN… they asked if we had any extra fins!!! Laughing, I handed over a spare pair of fins… 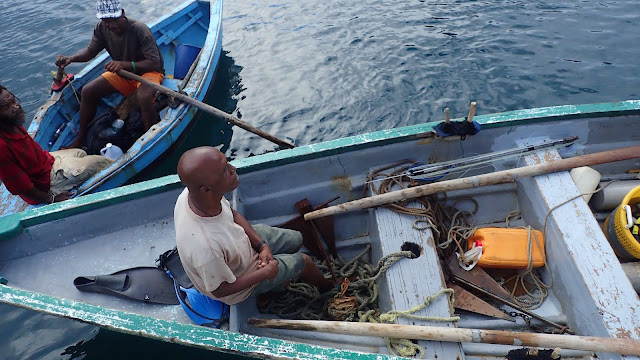 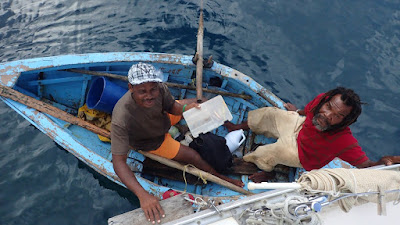 We talked a bit. The man in the water had been looking for fish. I guess they don’t bother spreading the nets if the fish aren’t there! Smart! The two boats continued on to do their work and a third boat that had ghosted up and was hovering pulled up to our side. It was a much smaller boat and immediately I knew that they saw us giving things away and wanted to see if we had anything left.

We greeted them and they asked if we had any fishing line. Bruce disappeared below again to dig through our fishing bag for stuff we don’t use. We hardly ever fish but we carry this big bag full of gear! Just give it to someone who can use it and lighten our load in the process!!! He reappeared with two fishing reels and a partitioned plastic box full of various saltwater lures. 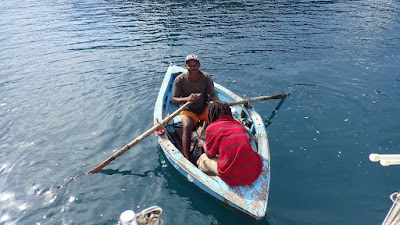 I asked the men if they wanted these things and passed them down to eager hands. Thinking the men would melt away… I was pleasantly surprised when they didn’t leave. They stayed to answer our questions about their process. The spokesman explained that if fish were present, the men would go out in the boats and spread the long nets out to encompass the entire bay from the outside. They would leave the nets there overnight and then scoop the ends in toward the beach, trapping the fish against the shore. Then the divers would go down and gather the bottom edge of the nets to the centre and tie them shut making a huge bowl that would keep the fish from escaping beneath the net. Then they would bring the nets onto the beach and sort the catch…

Ballyhoo and other baitfish would be taken to Kingstown to be sold to the offshore fishermen. Edible fish, everything else is an edible fish… would be sold here in the town or surrounding areas. These smaller fishermen, the ones without the big nets, would buy bait from the others and go out with hand lines to fish their secret spots. Today these two had a couple of fish that they would use for cut bait. 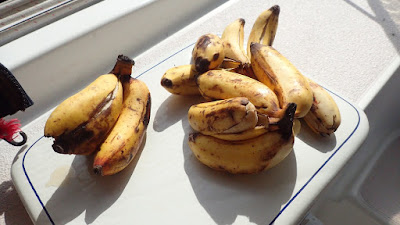 I had a bunch of bananas that needed to be banana bread so I went below to make that happen. It was hot work down below as the morning drifted into mid-day.

Hearing Bruce topside talking to someone, I popped my head out the companionway and saw that another boat had arrived. It was a tall thin-but-muscular Rasta-looking dude with his dreadlocks bundled into a colorful wrap extending out horizontally from the back of his head! While Bruce searched through his man-stuff… I spoke to the Rasta. Kenny. He came by to see if we had any 2-cycle oil we could spare. It is available on the island but you have to travel a long distance to get it. Bruce was happy to share.

You see… when we arrived here back in Chateaubelair… Boy Boy, in answer to my question about some of the cultural differences between our country and his… had told me that the people here are not greedy. If you have something that another needs, you give it. Everyone works together to get by.

I had been thinking a lot about that. Traveling on our boat… having given away so much of what was our life before… Sometimes I get a little clingy to my things. It’s like I have so little (comparative to what I once had) that the things I have are more precious to me. I know it may be difficult or expensive to replace things out here in these islands, far away from the Land-of-Plenty. But seeing these people and knowing that they have so much less than we do… my hold on things is loosened and their warmth and welcome have left us eager to help them in whatever ways we can. If we have it… we will share.

So anyway… I chatted with Kenny and asked him if he was a fisherman as well. He said he was a farmer. “Oh, what do you farm?”… His answer, though a little shocking to my straight-laced sensibilities, was met without skipping a beat. With a wave he said he had a ganja farm just over the hill there. I laughed and asked him if it was legal in SVG… He said it wasn’t. My next question: So why aren’t you in jail!?

He laughed and explained that as long as he “just be” and not make trouble, the authorities leave him alone. I guess he would have offered to sell us some of his produce had I shown the slightest inclination… but I did not. I questioned him about his business… He was on his way to check on his crop. He had dogs that stood guard and if anyone tried to come steal from him, the dogs would bark and he would know. It was an eye opening experience.

When Bruce finished handing over the oil, Kenny welcomed us to the island and said we were welcome to return here and that he would remember this boat. Awesome! We have received the blessing of the local drug lord! I felt better about our safety every minute… Only a little bit concerned when I remembered his statement about how some people can act like they’re your friend… but you can’t trust them… Hmmm…

Needless to say… I did not snap any photos of Mr. Kenny… 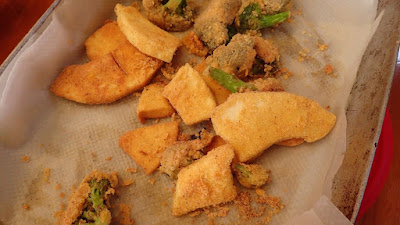 Kenny was the last of our visitors other than The-One-And-Only-Wesley… I was eager to give him a taste of the breadfruit he left us… For our lunch I had fried it up with some broccoli, both turned in Zatarains and I wanted to see if he liked it cooked our way. He did! He said it was better than the way they cooked it! Yes… that’s my point… A little seasoning wouldn’t kill you! Most of the breadfruit we’ve had in these islands has been seriously under seasoned and uninspiring… Cooked my way, Bruce said this could even replace potatoes in our diet! Mmm… no. 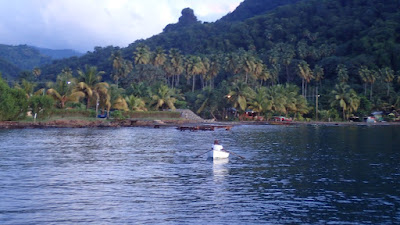 We settled on the deck to watch the sundown after a long and fruitful day… The feeling of happiness we have here is amazing. The people are all so nice. 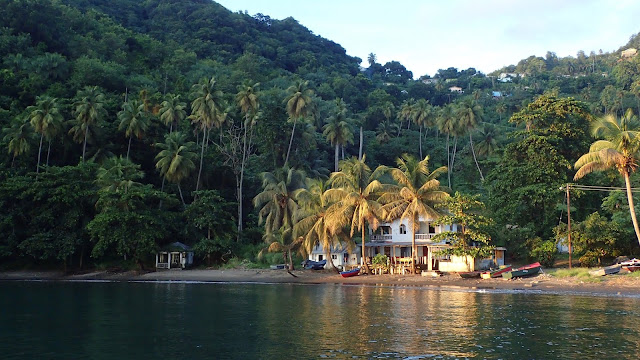 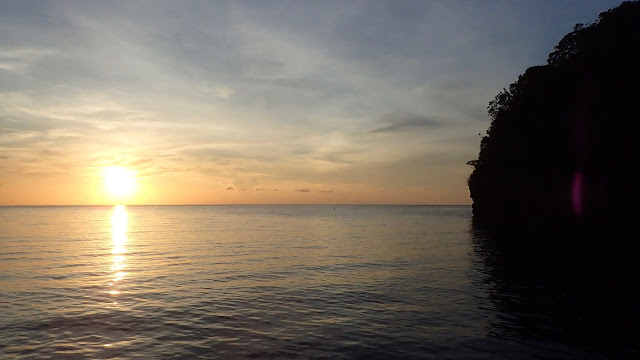