Tourguide Of The Year - Part III - My Crown is Slippin' 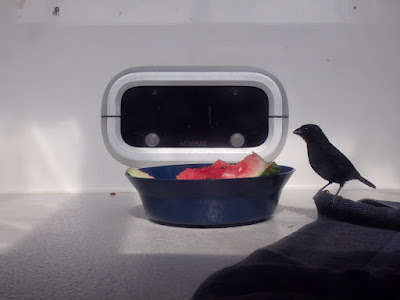 Into every life... a little rain must fall.  The week prior to our guest's arrival, the weather forecast looked wonderful for this week.  Unfortunately that fell apart and our one rainless day was over.  Some amount of rain is expected every day for the duration of the week...

But we will not be put off by a little rain!  This is the Caribbean!  It ALWAYS rains in September! 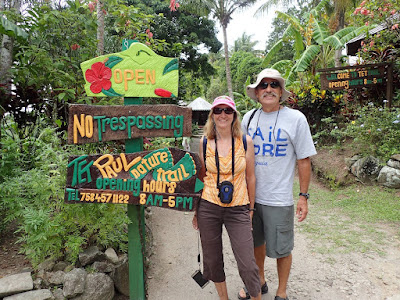 Today we would concentrate our efforts on the many choices of entertainment in the vicinity of Soufriere.  There's no way we can do it all... so we're just going to get started and see how much we can pack in before time to head home...  Beginning with the Tet Paul Nature Trail!


This is something Bruce and I haven't done yet.  Hiking isn't Bruce's thing, so he wasn't really interested in doing it, but I was.  It was nice to have like-minded friends who would do this with me! 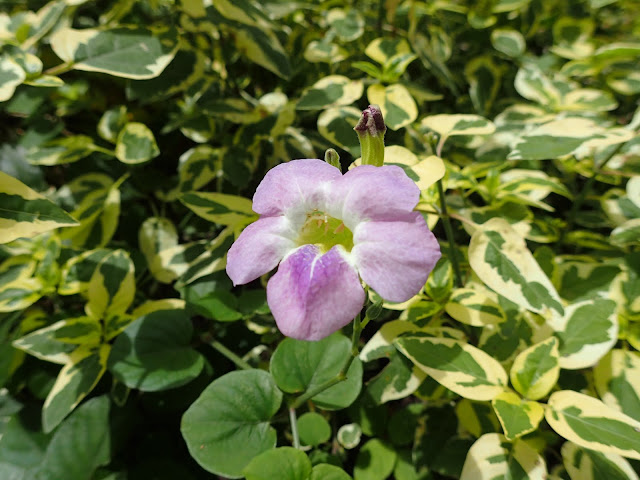 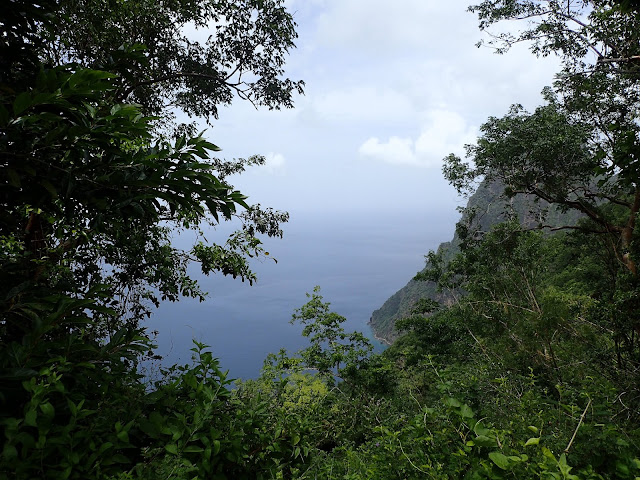 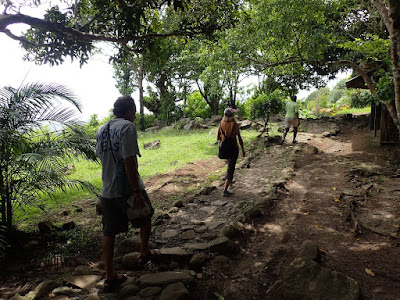 I was somehow misinformed about the degree of difficulty on this trail.  I was mentally prepared for a two hour scramble to reach a summit view...

What we found was a guided tour of about 45 minutes duration, along well prepared trails that were easy to manage. 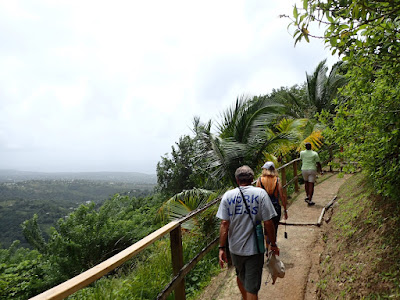 Most of the way was beneath trees and today we had such cloud cover that we hardly saw the sun.  The breeze was cool and gentle.  It was PERFECT!  Can't take credit for this but I'll try!  Remember, I'm on a three day streak vying for Tourguide of the Year! 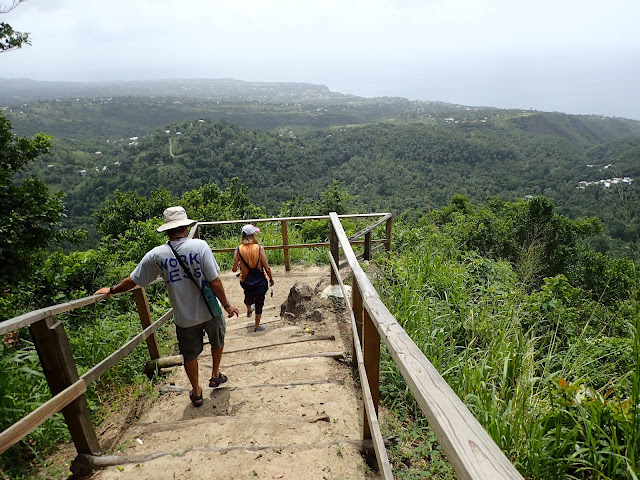 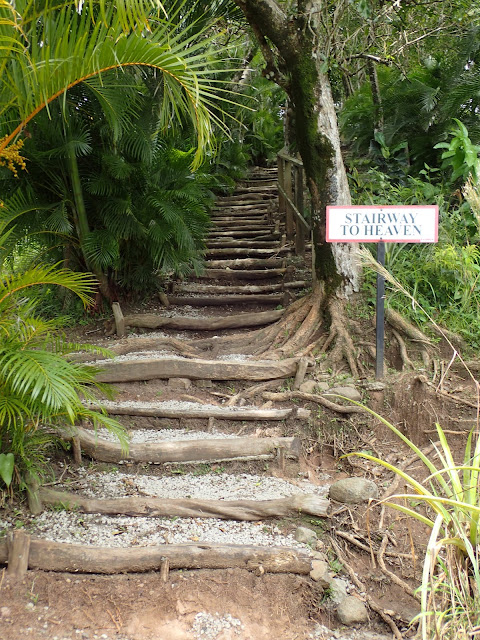 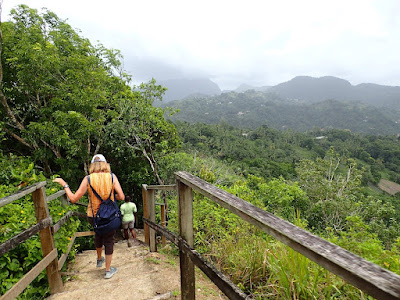 That's all folks!  We hiked back down to the entrance where Bruce was surprised to see us so soon.

We loaded up and took off for the crown event for today... Superman Falls! 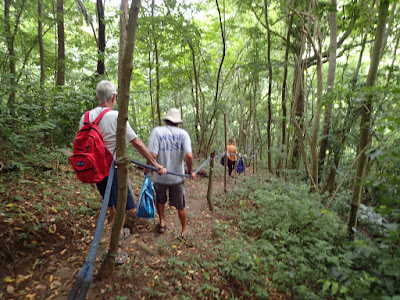 Thank goodness we planned ahead and rented a 4WD vehicle... with this one event in mind... we felt confident in our ability to get back out...

So far, the rain had been mostly light, but we've had some heavy rain overnight and the ground is very wet.

The last time we visited Superman Falls, there was one muddy spot and another rocky spot where water was literally running down the road.

We found those two spots and more coming in this time... but with the 4WD we're SET! 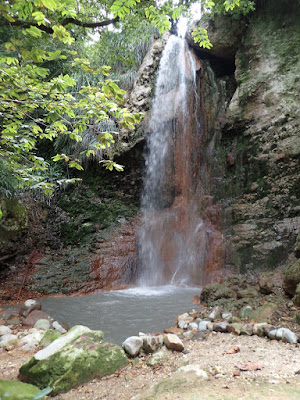 There were some young men in the clearing working on maintenance of the trail... One of them walked along in front of the car to the end of the road... The brush was obscuring the trail this time and we were happy to pay the "park fee" to this "guide"...  We negotiated a $100 EC price, down from the $25 pp US he initially quoted us...

We gathered our towels and our picnic lunch and politely declined the offer of a guided tour... and made our way down the long and winding pathway to the riverbed. 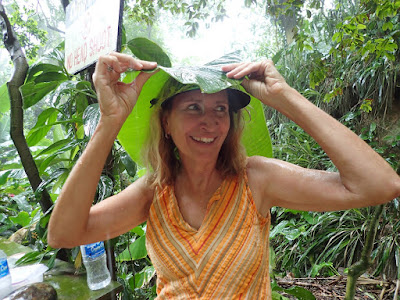 There it is.  Superman Falls.  On our last visit here I wasn't sure if we were at Superman or Sapphire Falls...  Our guide cleared that up for us - there's a path that leads off of this road that takes you to Sapphire falls... but he assured us that this is the better of the two. 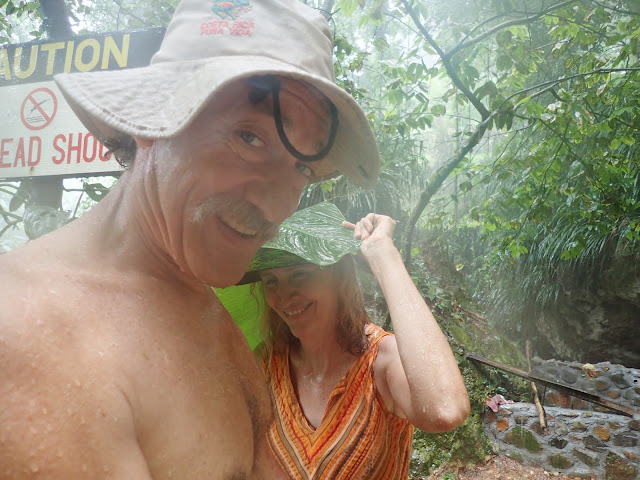 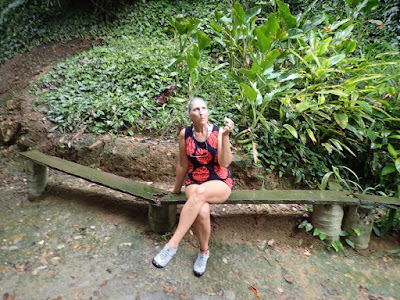 You can't tell it from this picture, but the rain is just steadily falling... HARD.

There we were... trying to have a happy picnic... eating our leftovers as the rain fell on our heads and our pizza... 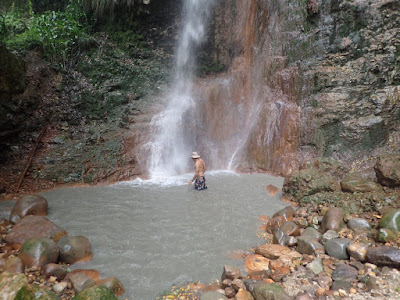 We laughed and tried to make the best of it...  Yeah, this place would be pretty great... if we weren't being flooded out! 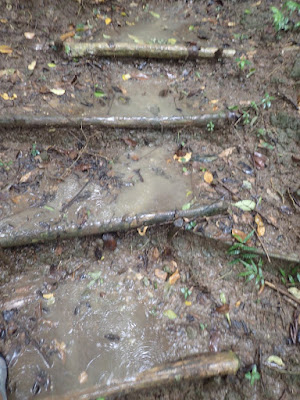 The rain continued to fall as we trudged back up the now thoroughly soggy path... 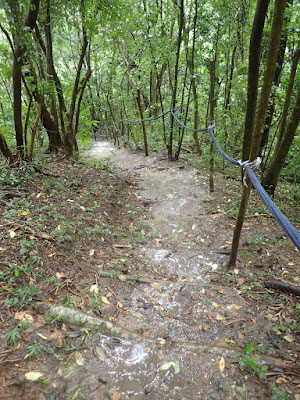 Back at the car we did the best we could to minimize the amount of mud and wetness we allowed in... Good luck with that!  We were soaked... We had one dry towel and one sort of damp towel between us!  Cutting our losses, we piled into the car and with a collective deep breath... we began the trek out of this mess...

It looked good for about the first 100 yards... then the car started to slide... just a little slip... Then forward motion stopped and we could hear the tires spinning in the mud.  Crap, we're STUCK!

A review of our situation showed that only one of the four wheels on our 4WD vehicle were turning...  We pulled out the owner's manual from the glove box and found no mention of this car being four wheel drive...  The only way we knew it was, is the statement of the person who delivered it.  Bruce had asked her how to engage 4WD and she stated "It's always in four wheel drive".  Lie.  Dirty Rotten LIE!

To make a long story short, as we were assessing our situation and formulating a plan, the young men who we met on our way in came right over and began working on getting us out. They had an ACTUAL four wheel drive vehicle AND a tow strap handy.  They hooked us up and with two of them behind pushing... we eventually got free of the now pig-sty-worthy muddy road.

It was really dicy there for a while...  Their truck had a hard time pulling our weight through the quagmire... but they did it!

The boys were all mud spattered but we were impressed with their efficiency... This is probably what they do for cash every time it rains!

Once we were back on "solid" ground, the boys came to our window with hopeful faces.  We gave them our cash and many thanks and shook off the tremors that were beginning to take hold...  We made it!  We're OUT! 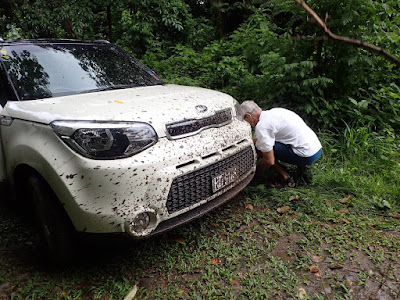 Instead, we were once again breaking branches to give traction beneath that tire...

It worked.  Between the branches and two of us pushing from behind while the driver worked the wheel side-to-side... the car slowly began to make way... then leapt back onto the rocky road!

The rest of the way back to the main road was fine...  All four of us breathed a sigh of relief as our tires gained asphalt... We slowly drove the steep and winding roads back to the boat.

The humor of the situation began to surface as our blood pressure resumed a normal level and our knees stopped quivering...  What an adventure we had together... For years we'll be saying "Remember that time we got stuck in the mud in the FAKE 4WD car? Man... was that fun or WHAT?"

We backtracked through the little towns between Soufriere and Marigot Bay... and we began to notice that everyone was staring at us.  Their faces would light up - jaws would drop - and they made comments like "Man let me wash that car for you!" and "Somebody's had some fun!"...  It was like we were on parade!  What, you've never seen a muddy car before?

We began to puff up and feel like Bad Asses... Yeah we been out having some FUN!  Whatever... We grinned back at them and practiced our Princes Wave...

Actually I can't remember ever seeing a muddy car here on St. Lucia.  Maybe that's a thing with them... It's not cool to drive around in a dirty car...  Well we sure drew a lot of attention all the way home.  We considered having it washed, but then decided that the rental company deserved to get it back covered in mud for lying to us about it being 4 wheel drive!!!

This little episode had eaten up our entire afternoon and we were exhausted!  By this time, all we wanted was to be dry and cozy and sedentary!

Well... I guess my crown for Tourguide of the Year is slipping like a FAKE 4WD in the mud...  But, hey... we had an adventure together and a lot of laughs...  I hope the rest of our week goes better... stay tuned!