Tourguide Of The Year - Part I 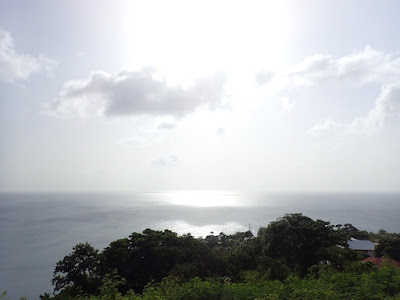 We love having visitors!  We love it even more when visitors return again and again!  Bruce and I used to vacation with a couple back home... Robert and Kathy.  We have chartered sailboats in BVI and The Grenadines... We've ridden the Silverton Railroad in Colorado, and we've hiked the crater of Haleakala on Maui with these two... and that's only a few of our adventures! 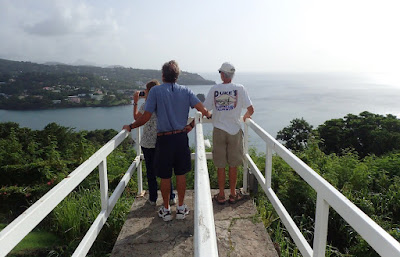 Since we began cruising, they've come to Bahamas, Dominican Republic, St. Kits & Nevis and now... St. Lucia to visit.  We couldn't wait for them to get here so that we could show them this island that we've grown to love so well!

I take it as a personal challenge to show our friends the best time while they're here... so they'll come back again!

Their plane was scheduled to arrive at about 3pm.  Unlike our last visitor's flight (more than 3 hours late), Robert and Kathy touched down just shortly after their scheduled arrival time and Bruce and I were there to collect them straight away!  They had a long layover in Trinidad but they were able to get an hotel room so they arrived well rested and ready to see some sights! 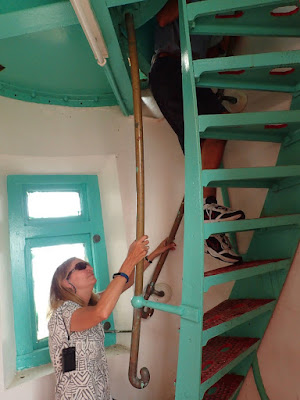 First up?  The Vigie Lighthouse!

The lighthouse is open to the public but published information states that the tower itself is not open.  I have discovered that if you ask nicely, the Keeper will let you in!

The red door was slightly swelled from recent rains so after we got the OK to go in, we had to put a shoulder to it to get it open... but we were determined!

It eventually gave way and I watched our guests ascend into the tower by way of the seriously steep spiral stairway. 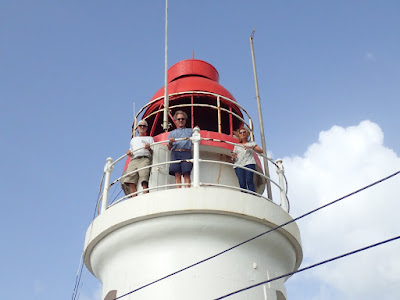 I've been to the top of this lighthouse, before and it's very tight quarters up there... So I remained with my feet firmly on the ground to take the pictures this time! Bruce went up to lead them around the circular viewing platform... where there is a lot of wind... and the railing is very rusty...and the cement floor is very cracked and crumbling...

Do you think I would be out of the running for Tourguide of the Year if I let my guide-ees plunge to their death on the first day? 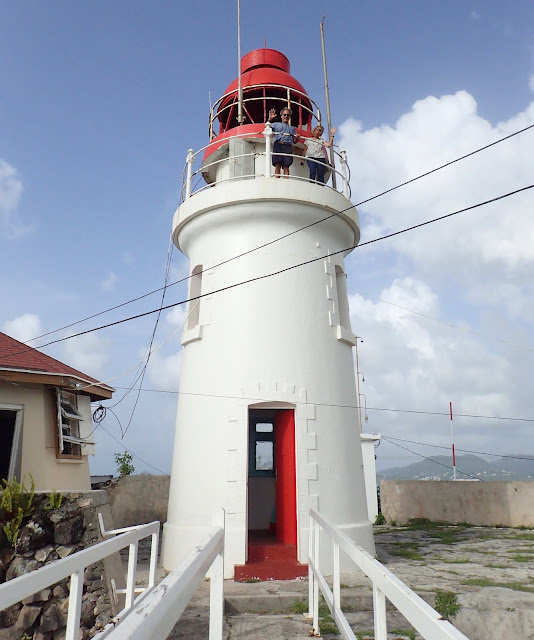 While they were climbing around, I chatted up the Lightkeeper, James.  He was very willing to talk... I guess it's a little lonely being a Lighthouse Keeper...  What I didn't know was that his position is also that of Port Captain.  Yes!


Well when you think of it, it just makes sense.  The lighthouse IS an Aid to Navigation... and it IS positioned at the entrance to the Port of Castries.  They would have superior radio range from this vantage point, and there must always be someone there.  Multiple people work a rotating shift to cover 24 hours per day all year long.

James really warmed up to us and told us stories of how the airport runway being as short as it is, planes have to come in very low for their landing...  For this reason, the Port captain is not only involved in managing sea traffic... but it involves managing take-offs and landings by air as well.

If a large container ship or cruise ship is navigating the port entrance, airplanes are asked to fly a holding pattern until the ship has safely entered the port.  Smaller boats that can manoeuvre more easily are asked to hold off if a plane is landing.

Unfortunately, James told us that there are many Charter Boats that do not call the Port Captain for instruction or permission to enter the port and commercial traffic is disrupted for these inconsiderate boaters.  We assured him that WE were not those people! 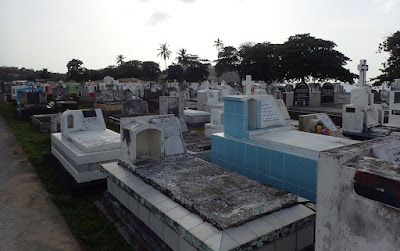 I was undecided about taking our friends to the cemetery... what kind of message does that send?  But when Robert asked what the little white buildings clustered together on the coastline were... it was the perfect segue into a short stop at the cemetery.

There were several workers present, leaning on their shovel handles and sitting languidly on the corner of one tomb or another... Obviously being a grave keeper is hot work.

The sun was going down and after a short walk around to visit my favorite monument... I tried to strike up conversation with a couple of the workers...  They pointed me to one man who was the only one who could speak English. Well sort of...  I think Patois was their primary language... a dialect based on French and a throwback from the varied history of the island that was once governed by France...

My questions remained unanswered as the man did not know how far back the graves went... but he did tell me that there is a book where they are all entered.  Well how cool is this??? There is actually a website where you can search for a grave and even see photos of most of the interments here!  Aptly named... Find-A-Grave!  Too much?  Sorry... 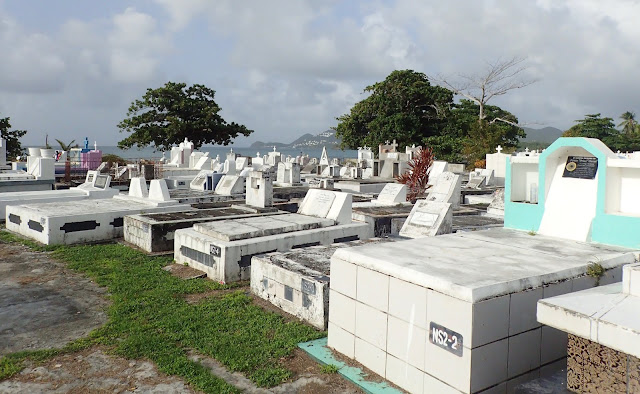 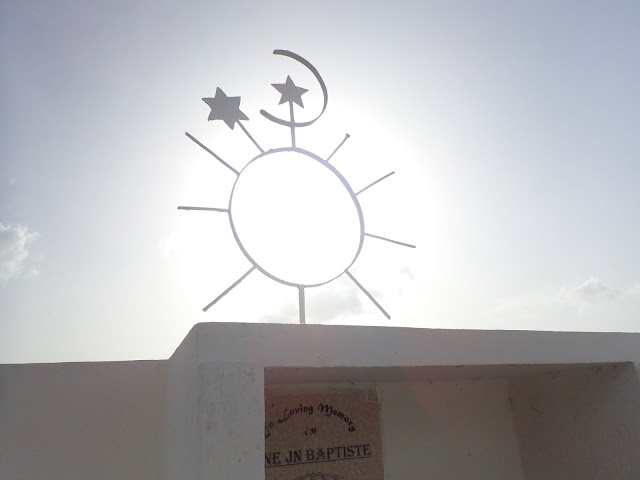 Well that's enough for the first day.  We loaded up our 4WD Kia and whisked our guests away, along mountainous roads, hairpin turns and steep inclines... Through forrest and village... to our little hideaway here in Marigot Bay.  Stay tuned.... we've only just begun!