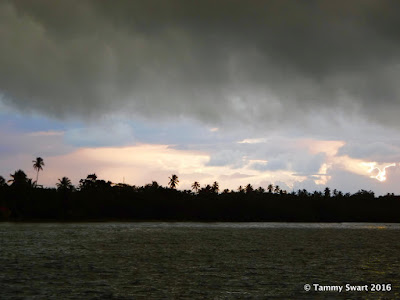 Saying goodbye to new old friends back in Patillas was tough, but we are glad to be moving again.  Also returning is our old friend "indecisiveness".  A word of advice for you:  If we ever tell you we're going somewhere specific... DON'T believe it! 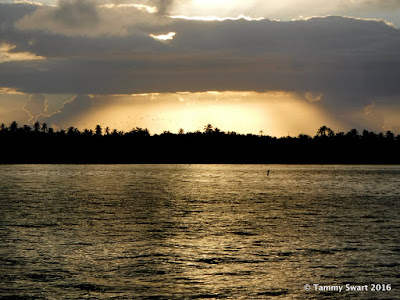 It's a well-known Libran trait - indecisiveness...  and sometimes we even surprise ourselves when it happens to us.  We took off from Patillas early hoping once again to avoid the building winds and waves.  Much to our dismay we were greeted by fairly good sized waves from the east, but the boat handles them well and we were banking on the waves decreasing in size once we rounded the point and turned more northeast. 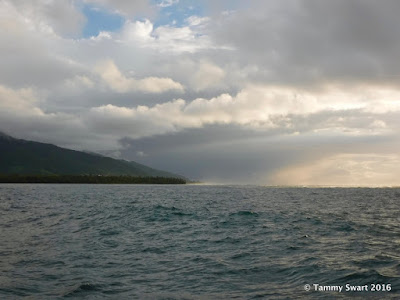 We romped out through the unseen reef that protects the anchorage and turned east.

Poor Jezabelle once again expressed her displeasure at moving from protected waters and out onto the cruel sea by being sick.  Thankfully after her initial upset, she settled in her misery for the few hours it took for us to once again find peace. 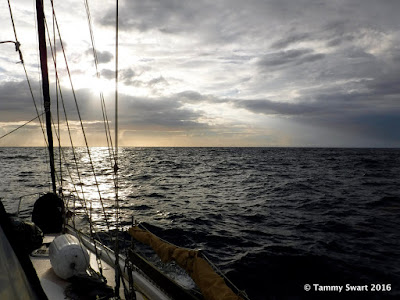 We had every intention of skirting the coastline and heading north to the little tiny island just off the coast near Fajardo called Isleta.

We looked at the forecast promising  light winds for the next couple of days then filling in more briskly from the East, with corresponding wave heights to match.  We re-decided to just head for one of our favorite anchorages on the western coast of Vieques instead.  It would make for a much shorter day and we would be once again in a deserted island oasis... just like we like it. 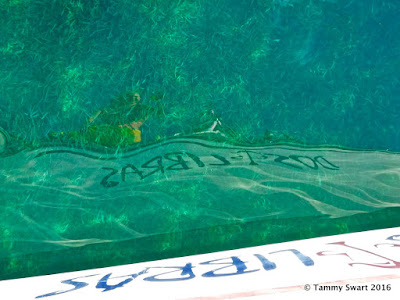 In no time we were dropping anchor in a spot marked on our chart and staring down into the crystal clear waters near Punta Arenas, Vieques... The Green Beach.  Vieques was once used by the US Navy as a site for bombing practice and even though that practice has long since ceased... this beach still bears the popular name given it by the Navy.  I get the sense that perhaps the Locals dislike the name... so Punta Arenas it is. 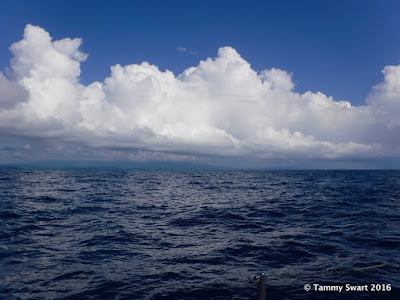 Our intention to stay one night and continue on changed again as we were lulled into mindless enjoyment of our idyllic surroundings.

We enjoyed an afternoon and evening just doing nothing but watching the sun go down... 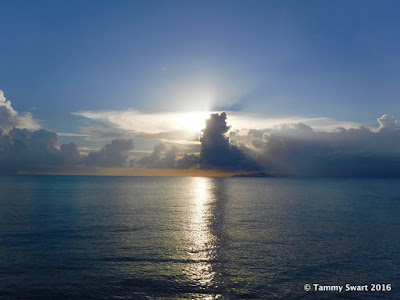 Close your eyes and imagine that you're on a boat rocking gently to the swell coming around the corner from the southeast... the coqui's begin their serenade from the shore and suddenly a lone Spotted Eagle-ray leaps high in the air... momentarily interrupting the sparkling path of the setting sun on the water's surface.

Of course there was no time to get a photo of that... I sat there holding the sharp intake of breath while I waited for second leap that never came.  That little moment was only for me. 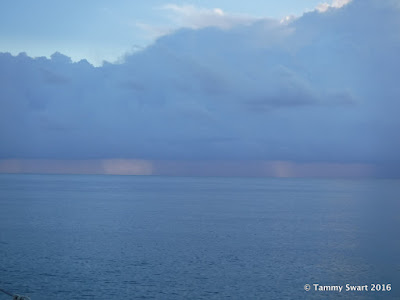 I was glad that the rain squalls we had watched march along all day to our north and south had refrained from dampening our enjoyment... although a deck shower might have been fun... 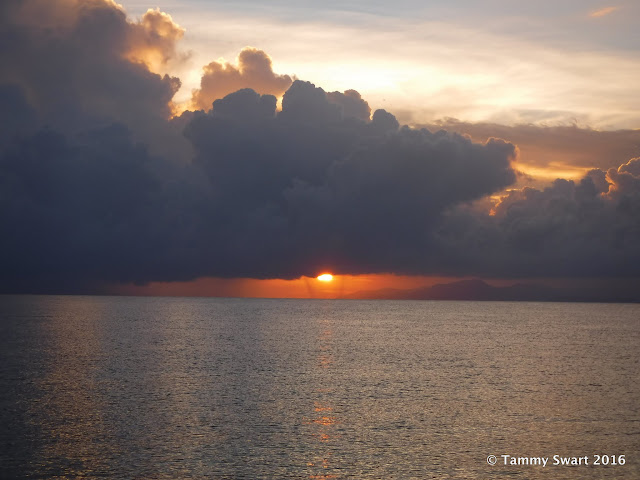 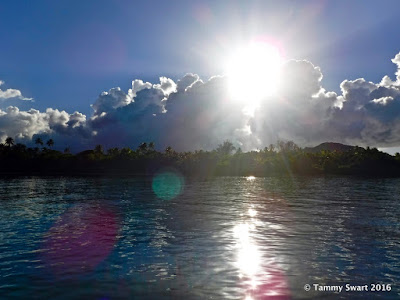 After a peaceful night's sleep marred only a little bit by the steady rocking of our boat as we sat sideways to the swell... we decided that we could do better.  We brought the snubber to the midship cleat and let out more anchor rode so that our bow would fall off with the light breeze allowing the boat to take the swell head on.  The rocking from front to back was MUCH preferable to the whole house rolling side to side. 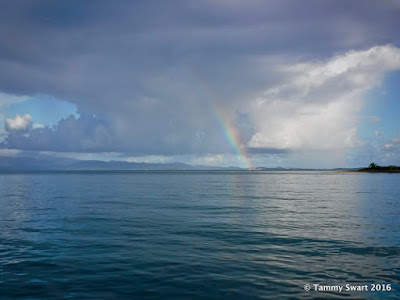 Once that was done we were able to get a few routine daily chores done, interrupted by a rainbow sighting! 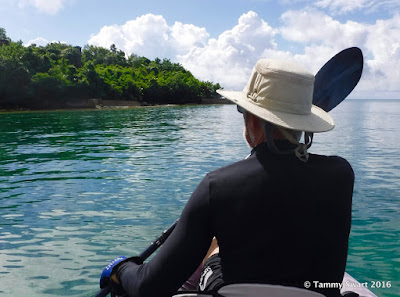 With our housekeeping duties behind us,  it was the to get out and enjoy this place.  We took our new (to us) inflatable kayak out and paddled effortlessly along the shore, happy to be getting some much needed exercise and sunshine! 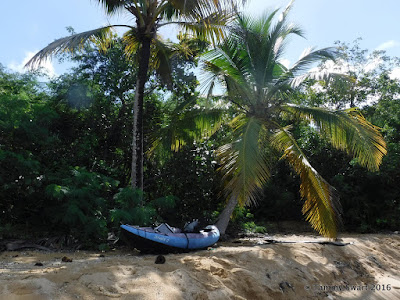 The kayak is very light so it was no trouble at all to just haul it up onto the beach in the shade of a palm tree while we did some snorkeling and beach combing. 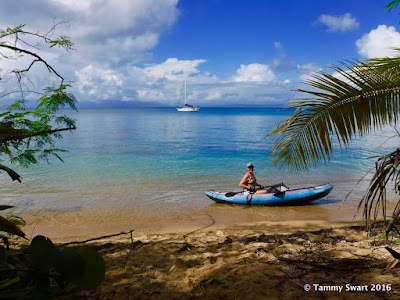 The morning was warming up with the light winds making it so nice to just sit in the water and enjoy the view. 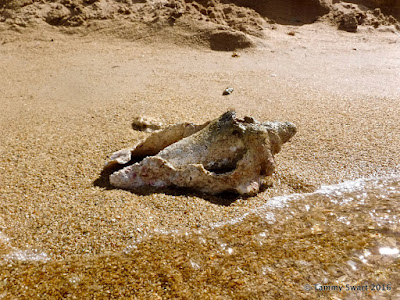 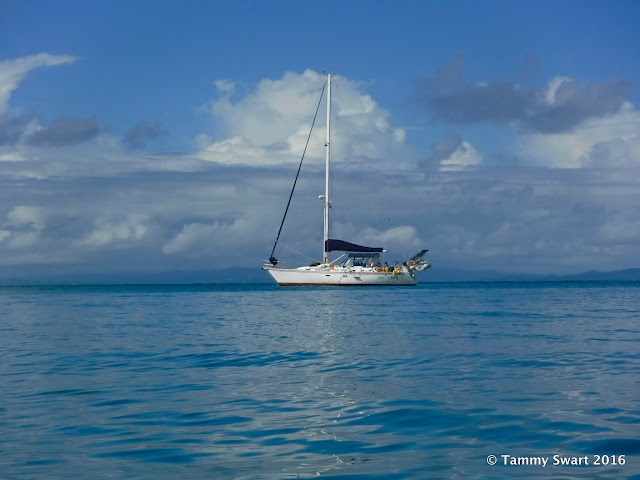 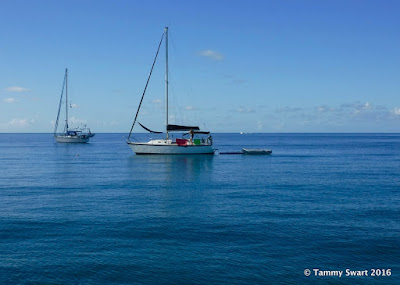 There was another reason we changed our minds about leaving for Culebra today... We stuck around so that we could meet up with Burton and Victoria, a young couple from San Juan that we met earlier in the summer.  They were sailing their 30' o'Day to Punta Arenas for the weekend and we were happy to hang around and visit with them again before moving on.  They arrived late morning and anchored Corta'ito right next to us.

We told stories into the night as this may be the last time we will see them for a long while...  They are just starting out in sailing and they dream of sailing away some day.  We made tentative plans for the following day but in typical  Libra style... we woke up in the morning and decided to take off for Culebra!  We waved goodbye to our friends as we slowly motored away...