The Things We Do For Friendship

For weeks we've been indecisive about what we're going to do for the summer.  While our Cruiser friends are arriving in the "safe zone", we continue to wander around here in the Virgin Islands.  The reason:  Our desire to reconnect with our old runnin' buddies from Texas.

We had a tough decision to make some weeks ago when they told us they would be chartering out of Fajardo, Puerto Rico.  It was literally the turning point... the deciding factor on where we would be during Hurricane Season.  We chose spending a week with our friends over running for "safety" down south.  Since then we have vacillated back and forth between feeling good about our decision... and wondering if we've made a mistake.  Only time will tell.

Our decision really wasn't even firm (and I guess it really won't be until October) when we arrived at Culebra.  All we knew at that point was that we were thoroughly enjoying our lazy time in the Virgin Islands and didn't want to rush off.  The thought of spending the (hopefully) more benign summer months exploring these easy cruising grounds was very compelling.


We fell in love with the lazy little community here on Culebra.  The anchorage in Ensenada Honda provides luxuriously flat waters and good holding with easy access to the town of Dewey.  There are several good places to eat, two grocery stores, a dinghy-up gas station and even a small library with a movie theatre!  We could really spend some time here!  Very Cruiser-Friendly!!!

Take a little stroll through the streets with me... 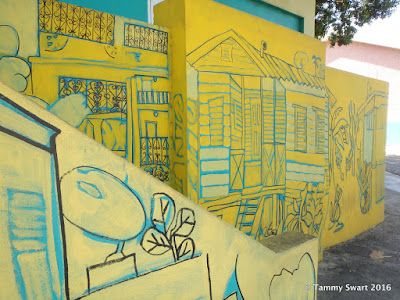 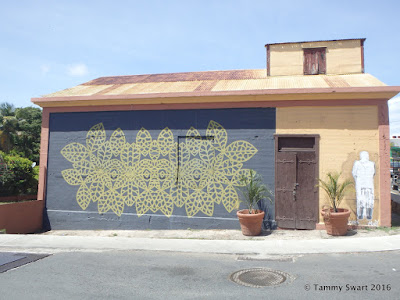 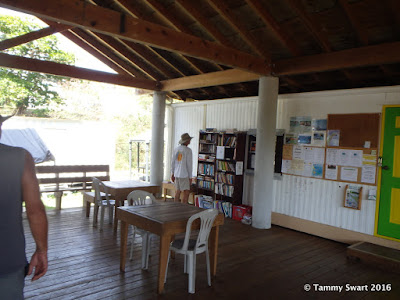 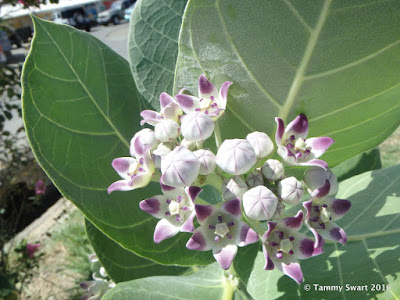 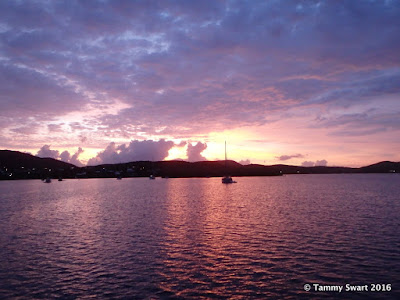 We had to press on so that we could be closer to Fajardo where we would meet up with our Charterers!  Our household could stand some attention and we found the most awesome place!  Isleta!  Our sail from Culebra to Isleta was the stuff dreams are made of.  We had expected a downwind rock and roll but the waves were not as big as the ones we had experienced getting from the USVIs to Culebra. 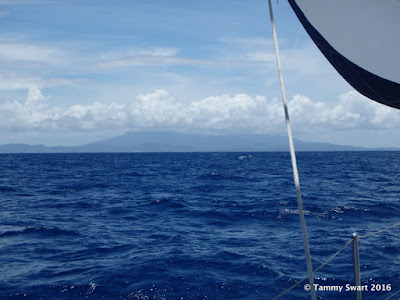 The ride was comfortable with the autopilot doing the work as we just sat back and enjoyed the scenery!  We didn't drop sails until we made the last turn to motor into the anchorage... and just at the last moment...we caught our dinner! 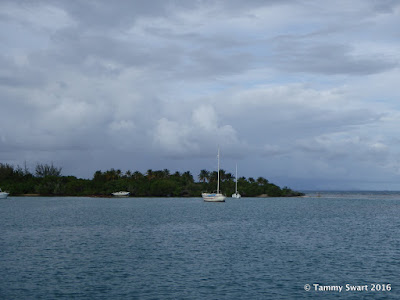 This anchorage has some unfortunate reviews on Active Captain.  We wouldn't have given it a second look had it not been for a chance meeting with Jose, owner of a small sailing school run out of the Isleta Marina.  He said that it was well protected and that the Marina is Cruiser-Friendly as well.  We found a nice spot amongst the permanently moored boats in the field with good holding and flat water.  The wind was only partially dampened by the low island and mangroves so we had a cool night with no bugs.

One day until our friends arrive...  We needed to do some laundry and get some fuel.  After doing some cleaning we loaded up our trash (stinky) and headed for the tiny island.  It was a very short distance and we wanted to see what we could take care of here before we ventured further to the town of Fajardo.  We met the very nice Security Guard for the condos and he read us the rules!

There are two separate properties on this island... one is the private condos and the other is the marina.  We were welcome to come to the Marina where they allow us to tie up the dinghy and dispose of trash for free.

The condos would let us use their laundry facilities.  We must be let in by the security guard who also has quarters... It is all very tightly controlled but access seems to be freely granted.

After checking it out and disposing of our trash, we dinghied about a half mile across to the mainland to get some diesel fuel.  There is another really welcoming marina there, Sun Bay Marina... with an easily accessible fuel dock.  The attendants there were SUPER and did all the work for us... AND would accept no tip!
Back at the boat, we offloaded our fuel jugs and loaded up the mountain of laundry... and off to the Isleta Marina again!  It is SO nice to feel welcome!  And getting our business taken care of so easily was just great.  There is also another marina (or two) back on Puerto Rico who allow Cruisers access to shore where we can find a Skipper Store and several other chandlery-type businesses...  Whoever gave this place a bad review on AC must be a very unhappy person... because this place is awesome! 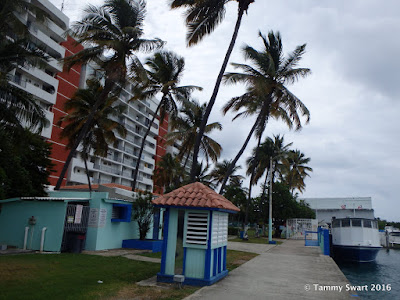 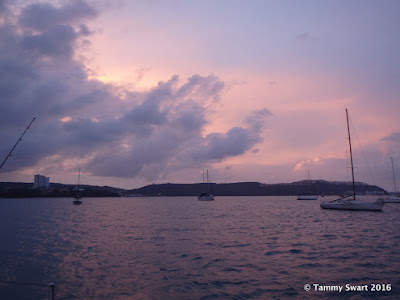 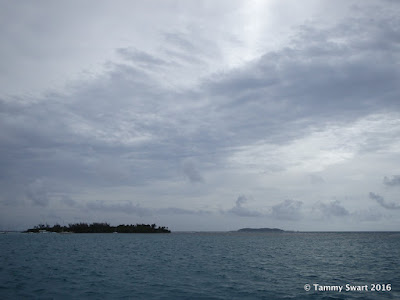 We were ready to move bright and early the next morning.  We expected the weather to deteriorate, wind and rain was forecast.  We hoped to be safely tucked into the tiny anchorage just outside the Puerto del Rey Marina before lunchtime! 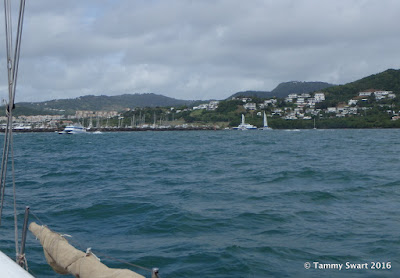 Coming into the channel there with big waves on our stern was a romp!  There were SCADS of boats of all sorts leaving the marina and the bounding waves made this tight spot all the more difficult.  We were almost run down by a departing catamaran full of tourists!  He was coming out around another smaller boat and only saw us dead ahead at the very last moment while I was forced out of the channel and would have been run aground had he not diverted when he did... 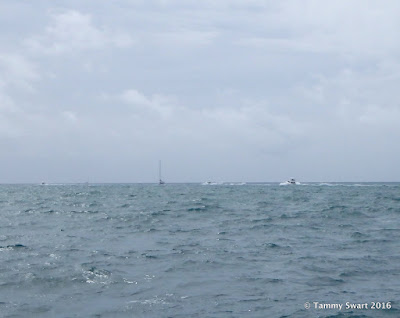 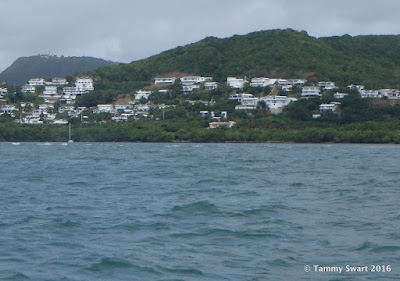 We found one boat permanently anchored in the small space and our options were limited.  There is a protective reef there but it wasn't doing a very good job of dampening the waves.  We motored around checking the depths and found them MUCH less than charted!  The oncoming waves and being on the lee shore with all the additional wake from endless boat traffic made our decision an easy one.  This anchorage would be OK but only for very calm conditions in settled weather.

No way were we staying here for the night!!!  I called the marina and quickly booked a slip.  After pulling the dinghy up onto the davits... no easy feat in the bounding waves... we readied our dock lines, pulled up the anchor and motored into the perfectly calm marina.  The dock hands were very efficient in getting us tied up securely and they left us with instructions to call the marina on VHF 72 when we needed them to come back with the golf cart to take us up to check in.


We hooked up to the power, turned on our ACs and cleaned up the mess, which was considerable after such a short hop.  Wow!  We were exhausted!  And it wasn't even noon!!! 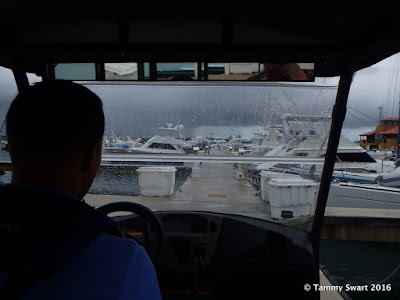 Congratulating ourselves on our wise decision to stop being cheapskates... we enjoyed the luxuries of our unexpected situation.  Another load of laundry was necessary after the rough entry and we were very thankful for the golf cart ride as this marina is HUGE!  We took our trash and laundry with us on the cart up to the very nice Marina office. 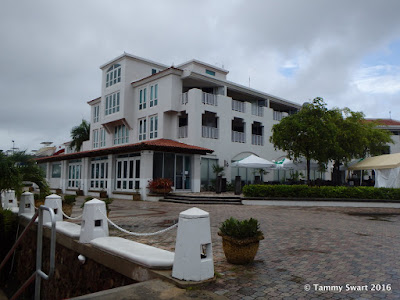 This place is more upscale than we expected.  The check-in process was a lengthy one, they entered all of our information into their system and issued us a laundry card...  The rain continued all afternoon as we did our laundry and awaited the arrival of our friends... 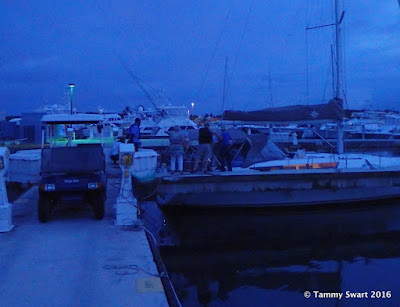 It was after dark before our friends finally arrived to their boat... which just happened to be on OUR DOCK! 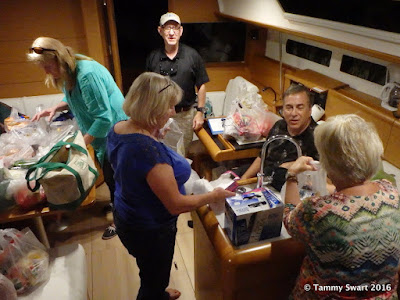 We went down with a batch of Painkillers, some meat/cheese/crackers to welcome them to the islands and found them loading all of their provisions onboard.  They were dead-tired from traveling all day but we were SO glad to see them all!

We invited them to our boat for dinner and spent a couple of hours catching up!  Their little eyes began to drop shut as their tummies were full and boat drinks were had... this crowd wasn't going to pull an all-nighter tonight!

We were so thankful for our choice as the rain fell all night long.  It would have been completely miserable out there in that crazy anchorage in the rain!  Instead we slept in cool comfort and even Jezabelle's cranky disposition was much improved by the time we departed the next morning.

It was still rainy and squally but we used our time in the slip wisely.  Our friends had picked up our previously ordered new anchor at West Marine Fajardo on their way in.  We worked between rain-showers to get it installed on the bow.  We moved the old (broken) Delta onto the secondary roller, not sure we'll leave it there as the fit isn't great... but we'll try it and see.  If we end up keeping it there, we will have it repaired sometime this summer.  We think it was broken during the Derecho back in Georgetown. 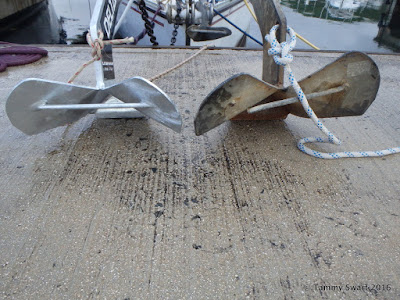 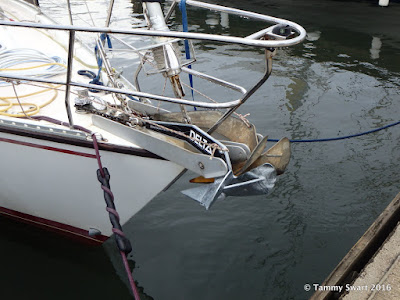 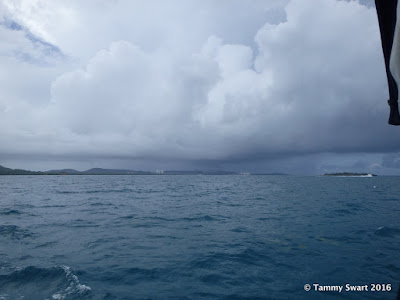 Finally after lunch, the rains began to abate and we left the slip...  Jezabelle was reluctant to leave the Air Conditioning behind but her attitude remained upbeat as we slogged our way across Vieques Sound toward Culebra.  Bruce and I were determined not to influence the choices of anchorage for our chartering friends. 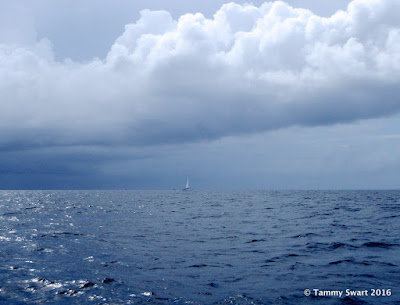 We were really feeling badly about the weather... like it was somehow our fault that the weather gods were throwing rainy squally conditions and big winds and their associated huge seas our way...  I just wanted it to be perfect for them so that they could get a taste of this life we love...

But they were on vacation and enjoying whatever they got... an ability we've lost.  I remember back when we first began cruising and we were just so happy to be here that we didn't care what the conditions were... Wind - bring it on!  Waves - we happily bounced along! Rain - Oh well, there'll be rainbows!!!

So as we listened to Chris Parker each morning hoping things would settle down and be perfect for our friends' limited time here... we resigned ourselves to just follow along and go with the flow.  We would just go wherever they wanted to go and enjoy our much-too-limited time with our friends... and hope they get a taste of why we're here.

We have no crystal ball.  We don't know what our future holds.  Perhaps come November we will regret this decision... perhaps we won't.  But when I heard Brenda tell how when she saw that we had left Puerto Rico for St. Croix, she thought "That's it... they're gone.  They aren't coming back!".  And she said how sad that made her feel... Somehow that made it all worth it, come what may.  These are the things we do for friendship.