After only four nights and three mostly rainy days in Christiansted, St. Croix we were off again!  But why???  What could cause us to forego the many sights and pleasures of beautiful St. Croix and have us once again bounding across the ocean main? 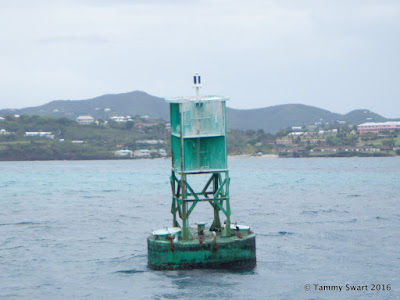 The irresistible lure of friendship, that’s what…

Even though our old BYC Buddies tried to sneak into the British Virgin Islands for a week-long charter without our knowledge… we found the Scurvy Dogs out and beat-feet to the BVIs for a meet-up!
The forecast squally weather would not deter us from making the 45 or so miles from St. Croix to enter BVI waters between Ginger Island and Virgin Gorda.

We had to clear into the country and Spanish Town was one of our options.  Our friends were on a 44 ft. catamaran which would make much faster time than us, so we figured we would head them off at the pass after their overnight stop at Cooper island…  We placed ourselves strategically overlooking the famous Baths of Virgin Gorda… 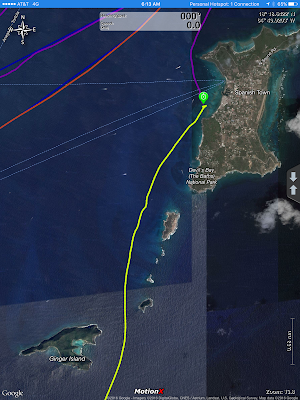 We set the anchor (after a little bit of dragging) just outside the reef that protects the Spanish Town Harbor.  There were many boats anchored or on mooring balls over in Thomas Bay but we didn’t want to be in the middle of that if the squalls got rowdy.  Now I’m not saying that we’ve become those “charter-hater-cruisers” but there is some sense in not being in the middle of a crowd when the weather gets rough…


Once we had the anchor down we watched as a wall of water slipped between us and Ginger Island…  We had a lot to digest.  Not only were we granted a seamless passage here… but we’ve been granted a Dream-Come-True.

Like countless other BVI Charter veterans, we have sailed these waters and swung from the moorings while nestled within the protected harbors of these islands.  And I wager that there isn’t one among them that has not dreamt of someday sailing here on their own boat…

I remember my first time so vividly.  It was the morning of our third day in the BVIs.  We were up early and watching the gentle light of an unseen sunrise color the clouds in hues of purple and pink after a calm night at Cooper Island.

The beauty was so overwhelming that it made me cry.  That was the first of many moments in which I cast the unrealistic vow to someday come here on a sailboat of my own.  I say unrealistic because in that moment it was.  I didn’t have a boat.  I could not say that I was a great sailor… only a novice.  But I wanted this.

Today, that tender dream came to fruition.  And it is good.  The excitement of seeing the islands in the distant moisture-laden haze was indescribable.  The smile cracked my face wide and would not leave.

And it was different this time.  Sailing these waters on a vacation charter is great… but arriving here with the many miles of experience is SO much better.  I never knew how much we didn’t know until that moment.

As we relaxed on the aft deck watching the rain all around us, we got a call on the VHF radio from Omega.  It was our friends calling!  Their plan changed and they were here instead of Cooper Island!

We directed them to our location and watched as they anchored just behind us.  We have missed our group of friends so much and couldn't wait to see them!!!  But the hugs would have to wait.  We hadn't cleared in yet and Customs & Immigration offices were closed...  One more night won't kill us!