Only three more days until my Mom flies into San Juan... and we're packing in as much of the south coast of Puerto Rico as we can.  It seems that time is always short and there are just never enough hours to do all of the things we want... we'll just have to come back!

Reviewing all of the possible stops and considering weather is a daily event.  The weather was no problem this time as we continued to enjoy uncommonly calm seas and light winds.

There are several stops still to be explored, Salinas and Puerto Patillas were high on our list... But after speaking to Sue and Rick on Orion about Boca del Infierno... a pass we had earlier considered but decided to pass because we're chicken... We were convinced that with the benign weather conditions and a little common sense, we could make it through the infamous pass on our own.  This anchorage is between Salinas and Puerto Patillas and thus cuts out one night on the south coast, giving us an extra day to be closer to Palmas del Mar, where we would stay for our visit with Mom. 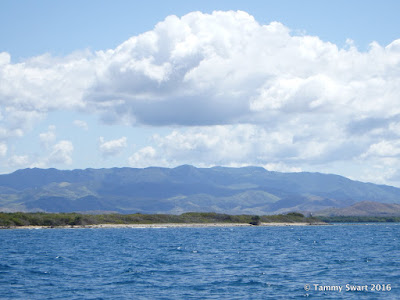 The staging anchorage was an easy 18 miles with the majority of distance being in protected water inside the reef line.

N17°55.378
W066°13.089
We had hoped for some snorkeling time but upon arrival at the mangrove anchorage, the water wasn't very inviting.  Putting the dinghy into the water and motoring over to the reef and then loading it back onto the davits for an early departure the next morning just seemed like too much work.  Yes.. I will admit that we've become so blasé about awesome snorkel spots that we can pass them up out of sheer laziness!

So we napped, read and enjoyed sundowners on the deck while we watched the daytime boat traffic carrying locals out to their weekend hideaways. 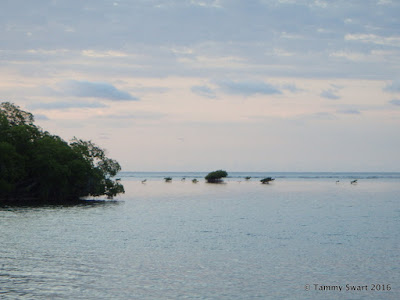 Early morning departures are our preferred choice.  Even though we've got a relatively light wind forecast for the day, the winds tend to come up in the afternoons.  The island shuts them down during the night and morning hours, so any dicey spots should be planned for the calm morning hours.  We passed through the not-so-scary-after-all Boca del Infierno pass in the best conditions possible... 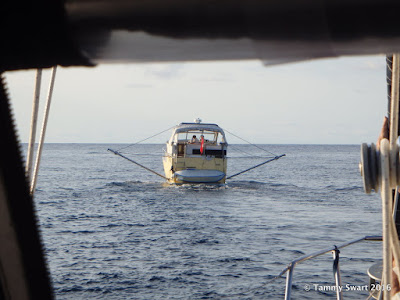 Another cruising boat had the same idea and we tag-teamed all along the coast until they departed for Vieques and we continued on to Cayo Santiago... aka Monkey Island! 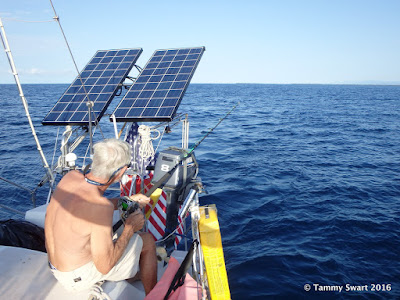 It was a beautiful day with warm sunshine, cool breeze and even a little bit of excitement!

But only a little bit... the lovely Wahoo we could have had for dinner made it all the way to the boat before disappearing with our favorite lure in his mouth! 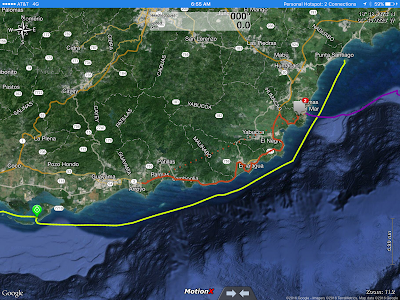 We turned NE and congratulated ourselves on making it to the east coast of Puerto Rico in time!  Having a schedule is never a good idea... especially when it involves weather and airline tickets.

With one more day to spare before our reservation at the Palmas del Mar Marina, we headed for Monkey Island! 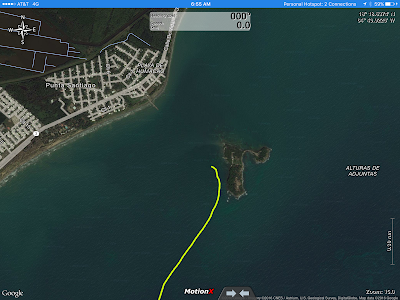 This place wasn't even on our radar until we began looking at possible places to spend that last night before Mother's arrival.  We wanted something that would provide protection from ESE winds that was close to the Marina and most of all... was FREE!  That it provided entertainment as well was a bonus!!!

We found a spot in sand to drop anchor as close to the island as we could get.  We discovered that our outboard had broken throttle cables so we couldn't use the dinghy.  We wanted to be close enough to see the monkeys from the boat, and to snorkel over to see them up close... but not TOO CLOSE!

The water shoals fast here so we dropped in about 8 ft and set easily in a sandy spot.  The bottom has grassy patches but we had no trouble. 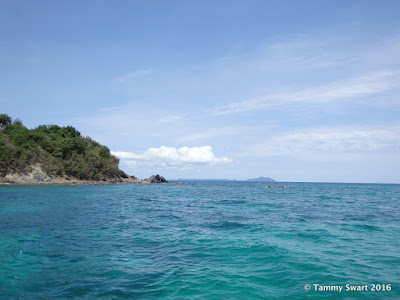 We were all alone in the anchorage but several small boats and jet-skis came over from the mainland to see the monkeys. 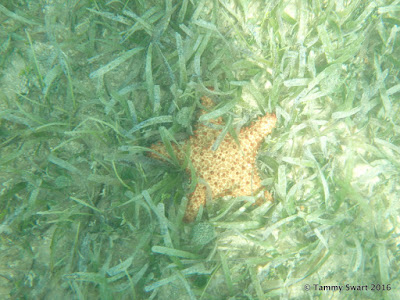 Snorkeling between the boat was relatively uneventful... We were told that there is a wreck on the other side of the Cay but we didn't have time to explore all of that. 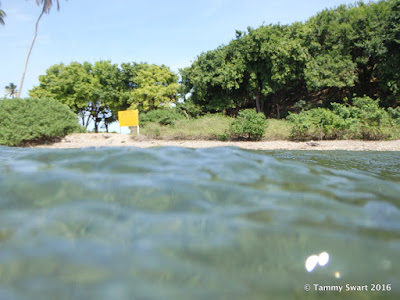 I was singleminded about the monkeys!!!  I was a little bit afraid of them... and rightly so.  Supposedly they carry Herpes B, which can be deadly to humans... so contact with them is highly discouraged... well, that and the fact that they could take your face off!!! 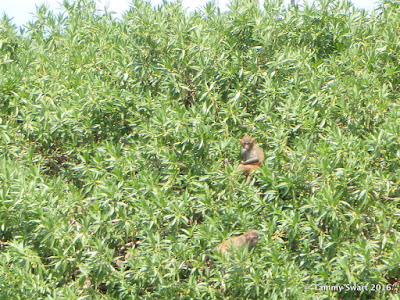 I snuck up on them in the water.  At first they were mostly in the trees away from the beach.  But they began to get curious as I grew brave and called to them... Here Monkey, Monkey, Monkey! 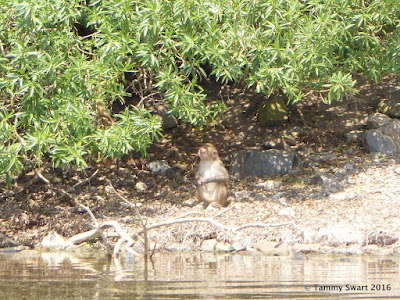 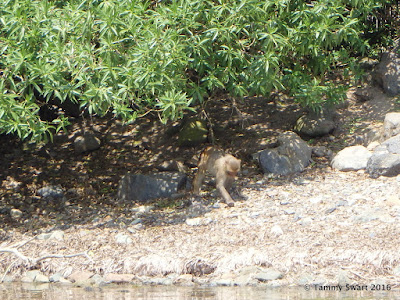 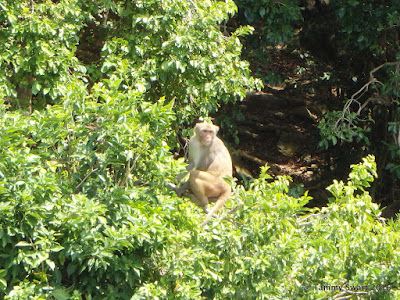 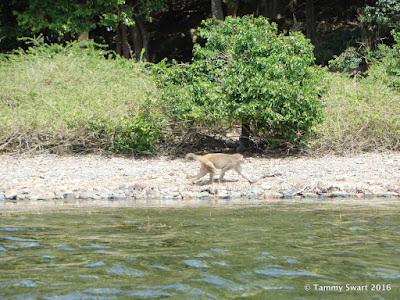 One big boy was strutting about on the beach.  He chased and scolded the smaller monkeys.

He seemed to be the Boss and I watched him for a while as he scattered the riffraff that came out to see me... 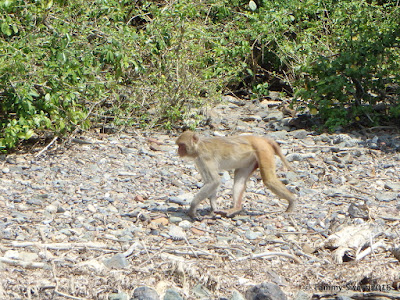 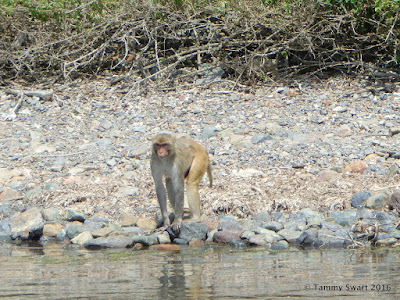 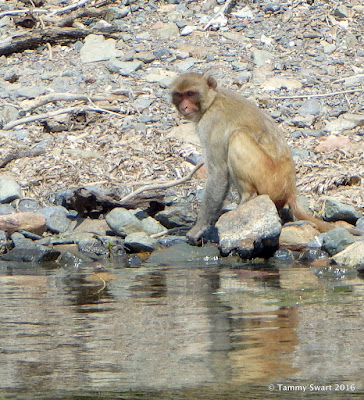 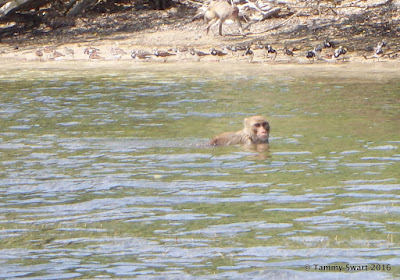 Unfortunately I was distracted by the smaller monkeys and didn't notice until almost too late... that the Big Guy was creeping up on me!!!

I wonder what would have happened had I not seen him!  But once I did, he stopped advancing and played it off...


He walked off and there was a little Monkey Ruckus... Yikes!!!  Then this Iguana came crawling down the beach.  I thought that would have been unpopular with the monkeys but evidently they live together in harmony. 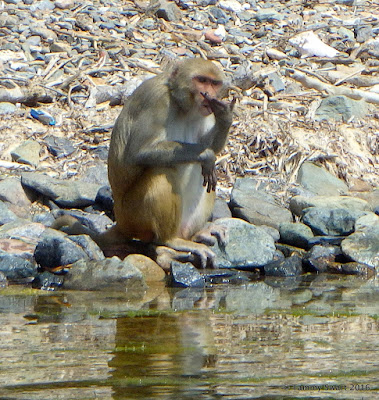 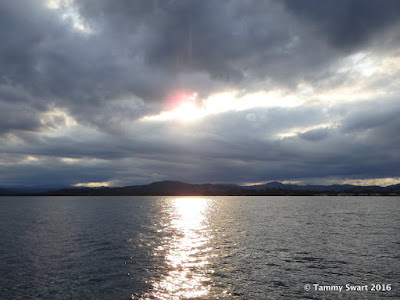 Getting to see the monkeys was a surprise side-trip!  Judging from my Facebook post comments, relatively few people know the monkeys are there on Cayo Santiago.  They are part of a long-standing research center and have been the island's only full-time inhabitants since the 1930s.  It's pretty cool. 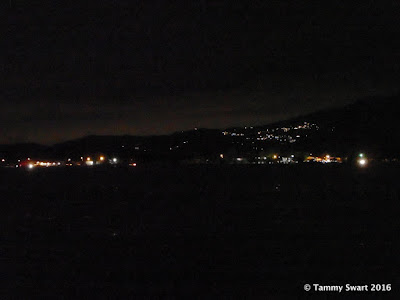 We relaxed the afternoon away and enjoyed the gorgeous view of Puerto Rico's east coast in the night.

We could hear the monkeys moaning and screeching and at one point there was such a prolonged screaming fit we worried that the island would be littered with monkey bodies when we woke up... 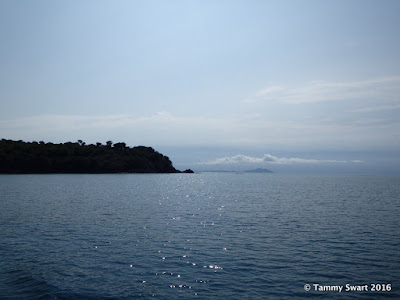 In the morning we pulled up the anchor and motored the short distance to check in at the marina that would be our home for a little over a week. 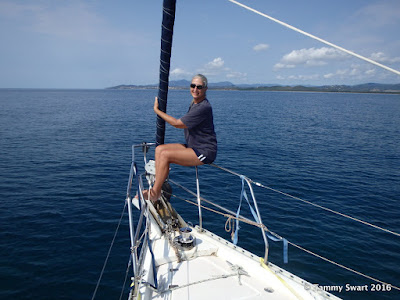 The water was absolutely still and it was getting rather warm!  Having some dockside time with the accompanying AIR CONDITIONING is going to be wonderful!

We can't say enough about the folks at The Yacht Club at Palmas del Mar.  They booked us by email and had a rental car waiting for us the next morning.

There is a car rental on the property making it very easy to do your business here.

We got settled and collected Mom later in the evening for a fun week of touristing!