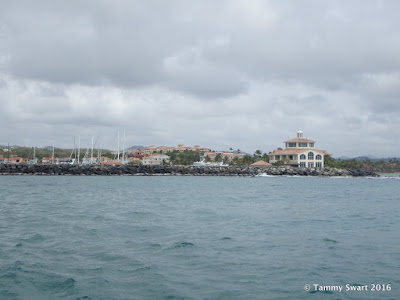 I guess it's natural to feel a little deflated after visitors depart.  The boat feels a little empty and quiet.  The weather wasn't helping our mood as the skies were cloudy and grey with rain.  Instead of heading right out on our next adventure, we took a lay day and postponed our departure until morning... 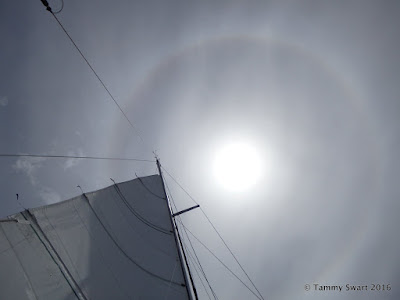 Although the weather was still a little unsettled the next day, we left The Yacht Club at Palmas del Mar as soon as we could get checked out.  We motored out through the breakwater and pointed our bow toward Vieques. 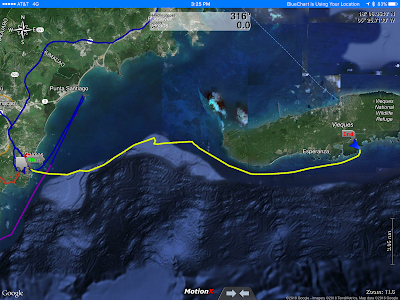 We really didn't know where we would be at the end of the day...  That's a strange feeling for me.  In my former life I was a planner.  Out here, the weather in our planner and we were not able to get Chris Parker on the SSB... We just took off with the previous day's report and figured we would see how the boat was sailing and go where the winds directed us.

We kept vacillating between finding an anchorage on Vieques... and setting out for St. Croix...  What we really needed was just to get away from the Marina and get our heads straight again, shake off land life and get back into Cruiser Mode. 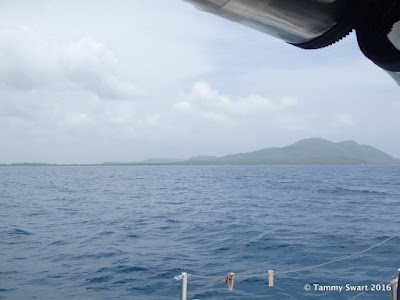 We considered the Green Beach but wanted something with a bit more protection from the forecast of possible squally weather. Seas were manageable but the winds seemed to be uncooperative.  We watched as the island of Vieques loomed larger and larger... 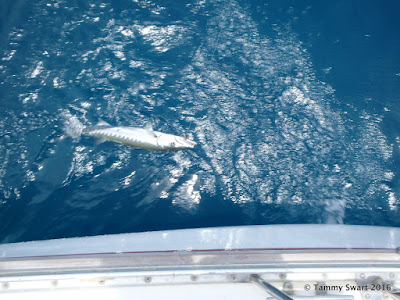 And our track fell off more and more...  The winds were just too light.  The engine came on and we fished for a while... Even almost caught something... but once again it got off at the last moment... It was OK though... just another Stupid Barracuda...

In the end although we wanted to head for St. Croix, USVI... we would settle for a cozy anchorage on Vieques.  Why make this difficult for ourselves.  Yes, we could just point our bow toward St. Croix and motor all night... or we could rest and re-evaluate the unsettled weather in the morning and then decide. 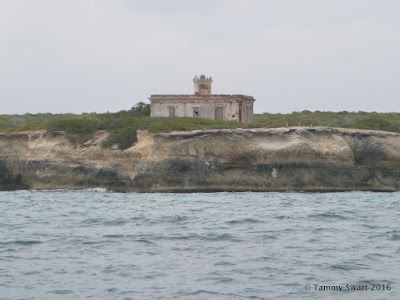 I had to quell my inner demons that push me onward and force myself to be reasonable... and patient. We had over a month to play with.  While other Cruisers were sailing fast to islands down Grenada way... or leaving the Bahamas to return north... Here we are wandering around in the middle waiting for friends from home to come for a charter around Memorial Day.


As we motorsailed along the south coast of Vieques, I consulted the charts and reviewed all of our options.  We chose Puerto Ferro as home for tonight and began searching the shoreline for the entrance.

There was a skinny spot and a few tense moments as we made our way into the anchorage but we were rewarded by a gloriously flat expanse with plenty of space for us and many more.


There were three other boats anchored to starboard so we turned to port and found a sandy patch to drop the anchor where we thought we would be most protected from waves.  There's a shoal or reef jutting out into the entrance and we tucked in just behind it where the wind could still (hopefully) blow the no-see-ums away.  We set the anchor and relaxed.

The day was warm and the clouds had given way to a bit of sunshine... The water looked inviting and it had been a while since our waterline had any attention... 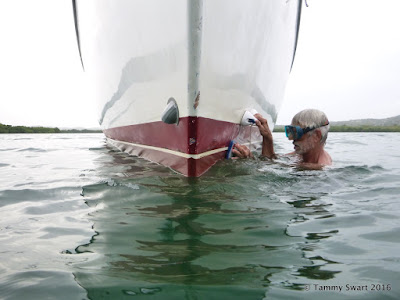 I floated around on my new float-seat for a while, watching Bruce wipe green stuff from the waterline... 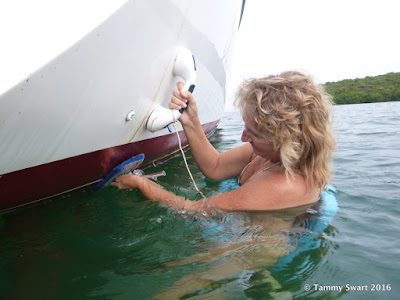 It looked like fun... and Bruce wasn't doing it to my satisfaction anyway... so I took over.  Bruce did one side and I did the other, then went over a few spots on his side...

It's a really nice setup with the suction handle and a scrubby... my floaty seat keeps me at just the right level in the water. 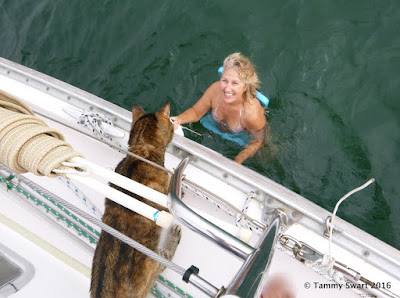 Jezabelle came out looking for us at about her dinnertime... I wonder what's going through her little cat-brain seeing us out in the water... 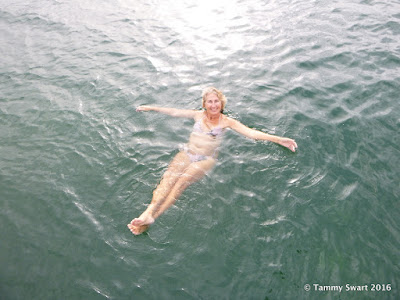 I floated a while without my float-seat... A phenomenon that irritates me greatly as fat is more buoyant than muscle... thus I can float without aid!  I'm trying to convince myself that it is just the extra salty water that is making this possible...

Maybe we'll stay a few days.  There are some squally days in the forecast and we need a place to hide out.  We could get some boat chores done... 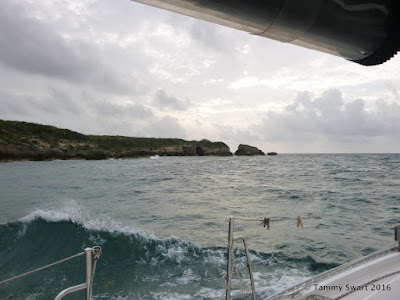 But after a good night's sleep, we tuned in to Chris Parker on the SSB and I was able to talk to him.  I asked for the best day to sail from Vieques to St. Croix and after a bit of hmmm-ing and haa-ing... he said "If it were me... I would go today!".  Suddenly we sprung into action and got things ready!

The weather should be better today than it will be for a week or more, so if we want to go... we go NOW!

Within the hour we were motoring back out of the entrance to our calm harbor and into rather bouncy seas. 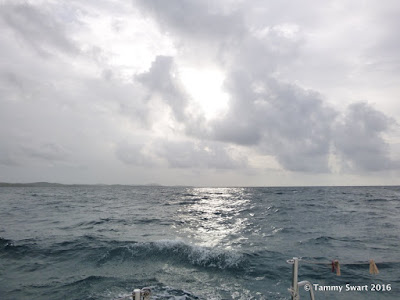 Hmmm...  It wasn't what we expected at all.  The boat climbed over boxy waves with lots of splash and a washing-machine effect...  Jezebelle was UNhappy... but we persevered.  One day of unpleasantness promised a new place to explore.

Conditions moderated a bit once we got going.  It was pretty much an upwind slog as we tacked back and forth from our lay line. 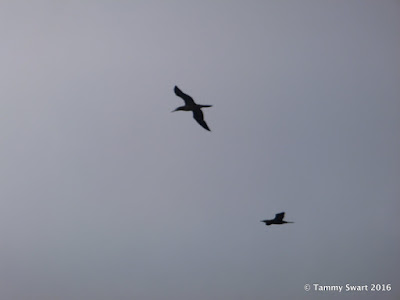 The winds clocked a bit as we neared the island and once in the lee, the waves settled considerably.

What we thought would take us 48 miles and about 9 hours, ended up taking us about 60 miles and over 11 hours!  What a long day!

We were desperate to make those last few miles as quickly as we could.  We didn't want to enter this tricky anchorage in the dark... and time was running out. 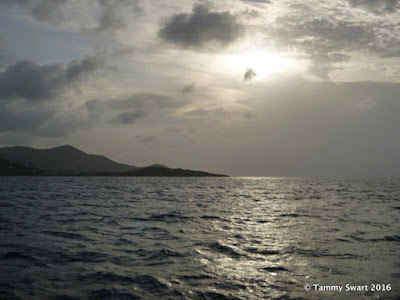 Thankfully the seas settled down and with the wind becoming more fluky, we dropped sails and motored directly toward the entrance to the Christiansted Harbor.

There is a split channel that leads around Protestant Cay... our intended anchorage was to port.  Bruce tidied up the sails while I guided the boat in and took a left. 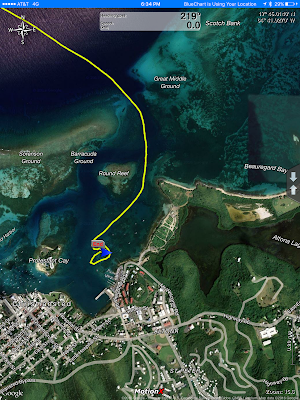 We rounded the last channel marker and took a sharp left then circled around checking depths and distances from the many other boats anchored there.

We dropped the anchor, set it, and had ourselves a well deserved beverage.  We could have wished for better sailing conditions today... But it wasn't scary or dangerous... just kind of rowdy.  We were tired, but we were very glad to be here. 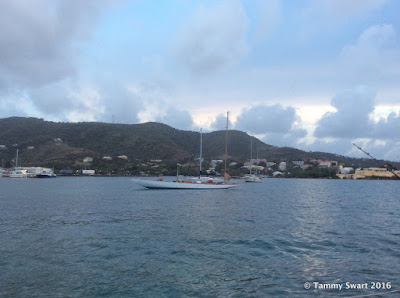 We expect a few days of very rainy weather followed by some days of exploring this seldom-visited island. We're in a beautiful place with an entire month stretching out before us in which we have nowhere to go and all month to get there!  Life is GOOD!