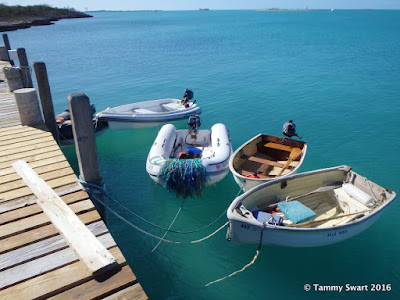 The days just continue to flow here in Thompsons Bay, Long Island.  There are plenty of boat projects to do but we take advantage of every opportunity to get off of the boat.  The winds were very light and the Bay was flat calm, perfect for snorkeling or fishing… but today, we would not be indulging in selfish pursuits…. No, another workday was on our agenda.  We suited up with sun protective clothing, grabbed our work-gloves and joined the others ashore.


Today we would split up into two groups.  While the unskilled labor unit filled bag after bag of trash from around the area… the more skilled laborers in the group would put their talents to use repairing the roof on the Farmer’s Market building. 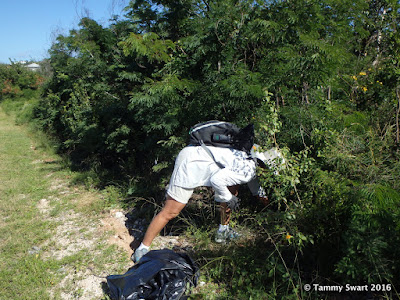 Being among the unskilled, I grabbed a bag and started picking through the bushes and stuffing bottles, pieces of buildings and roofing materials and whatever I happened to find littering the area between the dock and the market.

It was backbreaking work carrying that heavy bag and contorting to reach far into the brush to reach the trash.  This is the second trash collection party I’ve attended and this area is far cleaner than the last… even after the hurricane.  The majority of what we’re picking up here today is tar shingles that were just blown everywhere!

It was a little creepy.  There were big black spiders with their webs stretched across the brush… twice I pulled up pieces and found holes with big crabs inside.  They weren’t very happy to be found… any more than I was to have found them!

The many hands helping out made short work of trash duty and very soon we were out of trash bags and off to see how the skilled workers were doing.


Jerry (Encore) has some construction background and I found him hard at work on the roof when I arrived.  Now I KNOW for a fact that he has a lot of things to be doing on his own boat, so for him to set all of that aside and lend a hand here was big.  Watching him climb around up there made me a little nervous so I know that his wife must have been feeling it too… 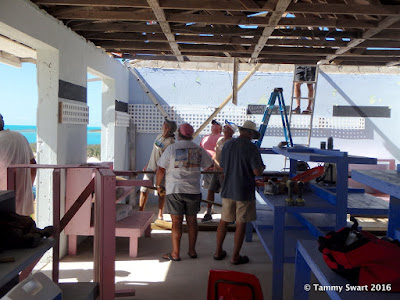 A portion of the roof was completely gone and had been covered by a tarp.  Four months after the storm and the Islanders have been using this building with no roof over one end… Today the guys were able to completely rebuild and enclose the structure with only the roofing shingles left to do. 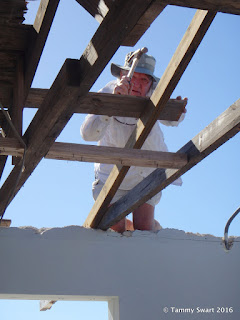 I would say they got plenty done!  One more work party and this building could be finished…  And as Cruisers go…others are arriving almost daily so I know it won’t be long until this is done. 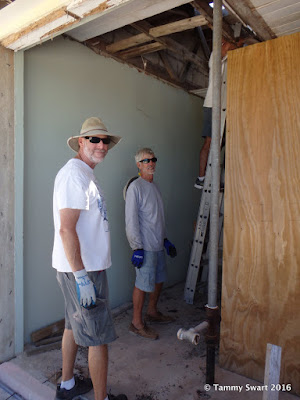 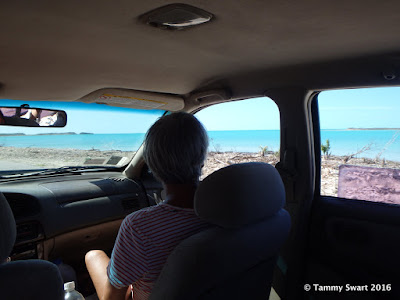 While all of this work was progressing, some of the girls snuck off to run some errands.  Bess (Alibi II), Francie (Barefootin) and Susan (Perigrin) were my partners-in-crime today with Bess being the instigator…  We took off (like a prom dress) in Bess’ car and retraced some of our tracks from an earlier excursion “up south”…

Bess was looking for some Vodka to give as a Thank You gift from someone who had done something nice for her.  There are several liquor stores within driving distance and so we were off for some comparison-shopping. 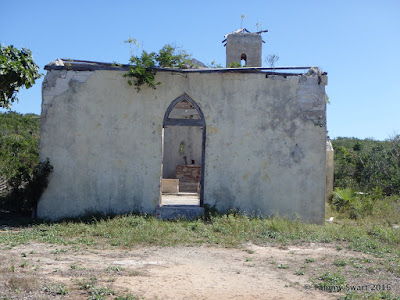 On our way to the first store we passed an old church that I had noticed before but never visited.  I asked if we could take a look at it and it ended up being the highlight of my day. 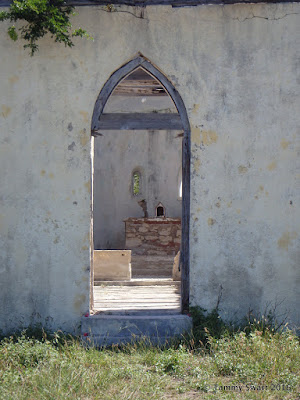 St. Mary The Virgin Anglican Church is said to be the oldest church in the Bahamas, built in the 1600s.  Walking around inside, I could just feel the history.  It is difficult to imagine that a structure built so simply with rudimentary tools can withstand the passage of so much time and still remain. 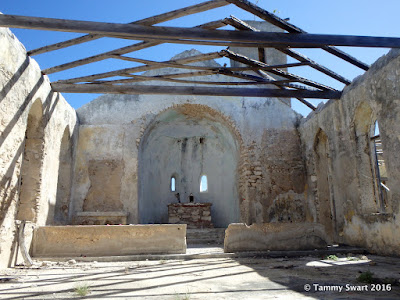 The roof is gone, probably with Juaquin, but there is evidence of recent activity in the newly burned candles all about.  They even still hold weddings here. 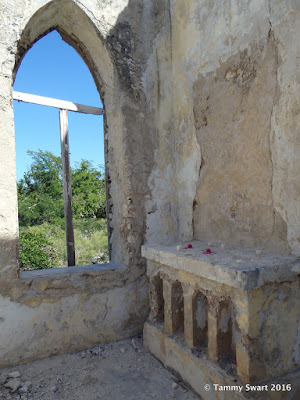 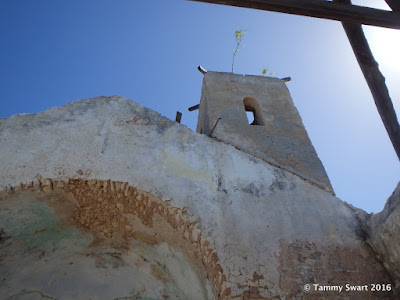 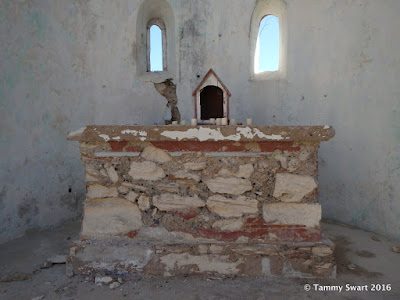 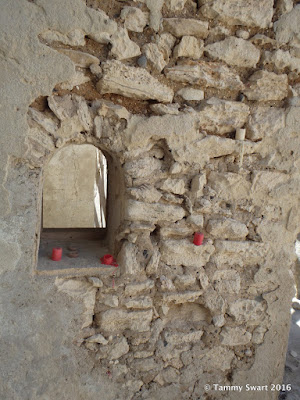 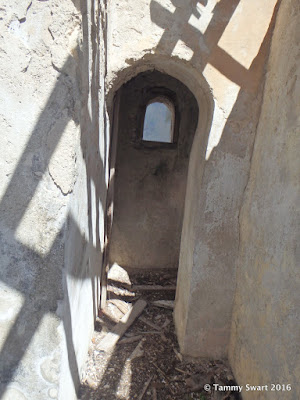 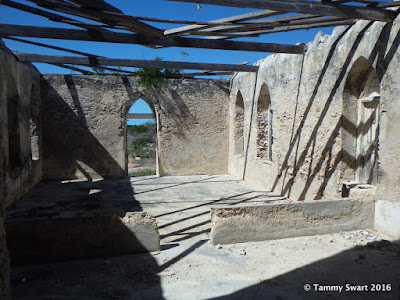 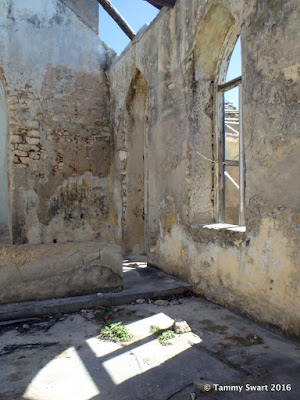 We sped along the Queen’s Highway, visiting several stores and finally stopping back at Bling Bling… Yes, that’s the name.  We made our purchases and realized that our tour of the island had taken us more than an hour and a half.  We started to worry that we would be missed and maybe in trouble with our spouses… 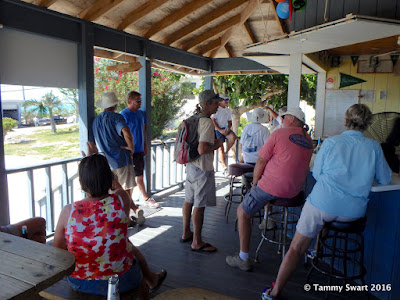 Arriving back at the Farmer’s Market building, the work party was just breaking up and people were beginning to wander off to find food.  We met up with Jerry and Sally back at Sou’ Side Bar and Grill for a delicious late lunch of Hog Snapper Fingers and fries.

Further plans were being made for a happy hour here at Sou’ Side but after today… no chance we’re coming back ashore for that.  We split up and went back to the boat for naps, showers and a lazy afternoon.

I know... lazy, but we haven't had this much to do in a long time!  Tomorrow, the Farmer's Market!