After yesterday’s workday, today we pretty much just enjoyed ourselves.  I was excited about the Farmer’s Market since last week it was cut short with locals attending a funeral.  Today it was in full swing, such as it is…   We took the dinghy ashore early so that we could be there when the market opened.

I guess we were a little too early… so we took a walk up the road to see where it led.  That was kind of fun…  The paved road wound past a couple of pretty nice homes and then ended in a sand road rolling down to the shore on the east side of the island. 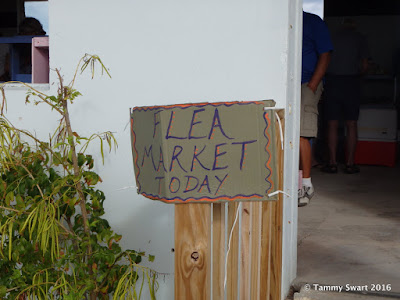 There wasn’t time to go any further so we turned back and by the time we arrived the Market was in full swing.

I had hoped for some fresh veggies but really didn’t see anything that I knew how to cook… mostly some very robust looking greens.  I had my eye on a really pretty hand woven purse with goat fur accents… but it was $65 and I couldn’t justify the purchase since I haven’t carried a purse in more than three years… 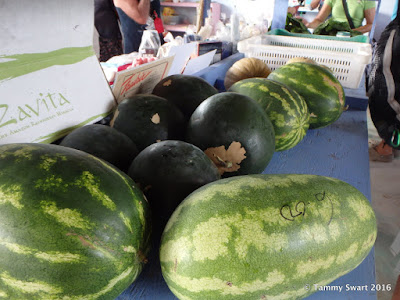 But what I really came here for was an island-grown watermelon.  We had seen them here last week and I talked myself out of buying one… then I spent the entire rest of the week asking myself why I hadn’t.  Not going to make that mistake again. 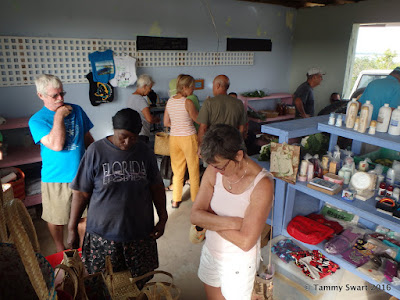 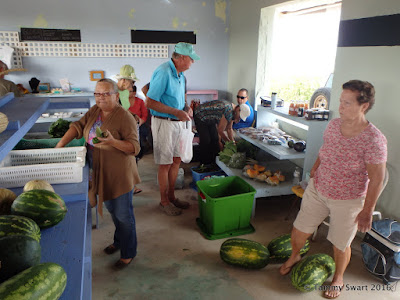 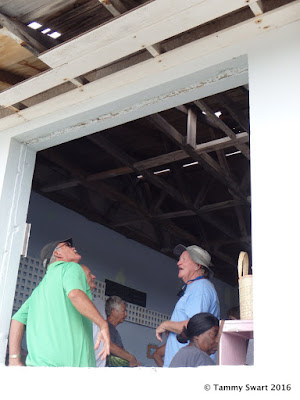 People were coming and going, the market was a “happenin’” place today.  The men hung out admiring the new roof while the women went about business.  Before we turned to leave we found some loaves of fresh baked bread and picked up one of those.  I eat so much more bread out here cruising than I’ve ever eaten before.  But I just can’t pass it up… it’s SO good!  I like to justify it by telling myself that I’m stimulating the local economy… yeah, that’s what I’m going with. 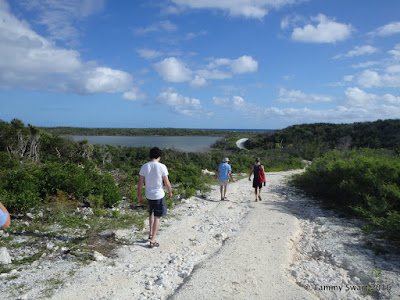 We told met up with Sally and told her that we were going back over the island for a walk and invited her to join us.  They invited another couple and their son, and the seven of us took off over the hill. 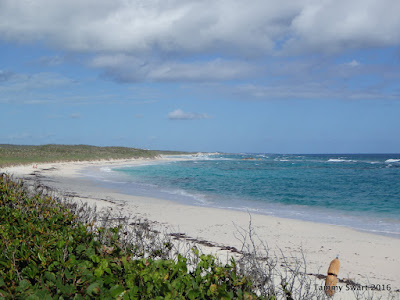 The view of the coast was – yep – you guessed it…  Stunning of course.  Nothing new here, we’re getting used to it…  We stood around chit-chatting until the guys prompted us to turn around and backtrack to the dinghies and returned to our respective boats. 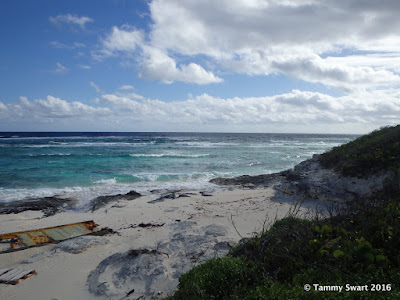 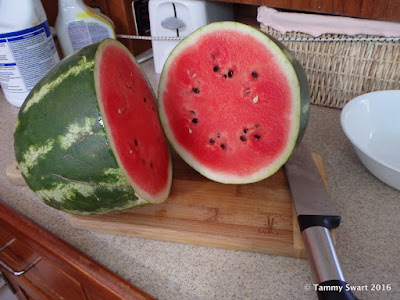 We had lunch and cut up our watermelon.  It was a deep rich color with very thin rind.  It was nothing like the pale tasteless melons we get back in the States.  We relaxed and got in a long nap.  Hey, doing manual labor has made us very tired!  We were just waking up and lying around reading when we heard Jerry holler across at us from Encore. 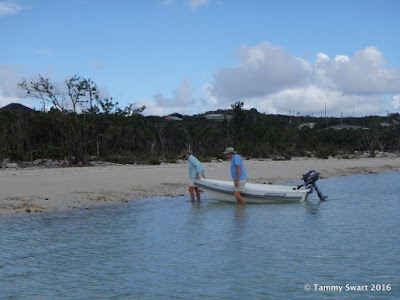 There had been a call out on the VHF for an emergency beach happy hour at the north end of the Bay.  We scrambled to get our drinks ready and headed for the shore!

Days like this make me think about my former life.  Back when I was stressed out and tired all the time.  Back when almost every moment of my day…week… month was planned out in minute detail.  Spontaneity was something I had to work to cultivate.  But if you have to cultivate it… then it isn’t spontaneous… right?

Now our days just seem to “happen”.  We never know how they will go.  It’s like we are careening through space with no ties.  It’s like every day really is a fortune cookie that we crack open to read…


The people here are just random couples with whom we’ve been thrown together in this Bay for some indeterminate length of time.  They come from all over and with many different backgrounds.  I must say that THIS group is particularly fine bunch.

We shared stories and weather forecasts and swatted no-see-ums (yes, I forgot to bring my repellant… when will I learn) and made short-term plans written in sand at high tide.  We watched the sun go down and suddenly scattered back to our floating homes bathed in glorious colors of sunset. 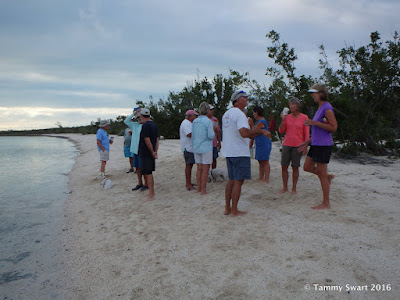 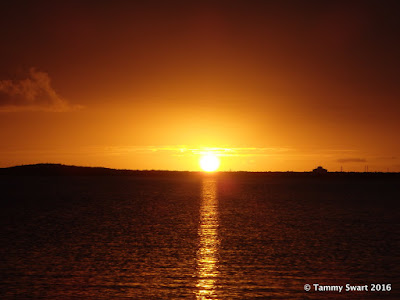 About those weather forecasts…  We were in for a doozie of a blow.  The next day would begin very calmly with a light breeze from the south.  It would continue to clock around to SW, W , NW and eventually north with steadily increasing velocity.

Thompsons Bay is protected from all but southerly winds, but since the winds from the south were forecast to be light and for only short in duration before they clocked behind the peninsula… we figured we could stand it.  I guess we didn’t have much choice… there was nowhere to run here on Long Island.

Just after Chris Parker Weather, we pulled up the anchor and moved about half a mile across the Bay. Many of the others here were going to stay put, figuring that their anchors were dug in well enough that being blown toward the lee shore wouldn’t be an issue and the short length of time that the winds would be stuffing waves up our … bows… would be tolerable.

My concert, coming from the memory of our days in West Bay a year ago, was that we were in particularly shallow water, only inches above six feet at low tide… I feared that the building waves would bounce us off of the bottom and that would be no fun.  We needed more water beneath our keel and we found it just a few hundred feet to the west. 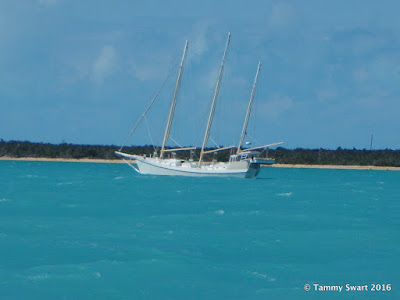 We joined quite a few other boats already anchored there but still spread widely apart with plenty of room for us…   We set the anchor and Encore came over soon afterwards to park nearby.  It would be a long day.

We piddled and read and I cooked some things.  I was just saying as we sat down to eat lunch with the boat leaping against her anchor rode… “I wonder if we should get the cat out of our room in case she gets seasick…”  when I heard the telltale sound of – yes – she was seasick. 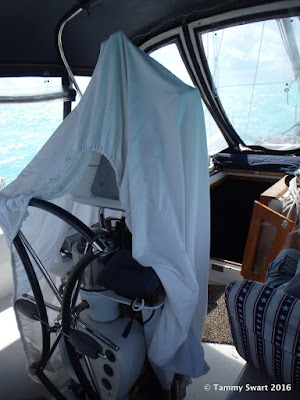 I scrambled to reach her and get her off of the bed before she tossed her breakfast all over our sheets… but I was too late.  I guess the good news is that since we had never really attended to our morning chores, the bed was unmade and she only took out the sheets and not the bedspread. 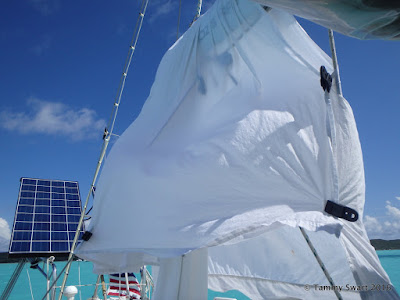 So I spent the next half hour washing our sheets in a bucket in the bathtub…  Hey, they probably were due for a wash anyway and I was just being lazy.  Now we had to figure out where to hang them to dry without the boat taking flight!  I spread them out as best I could, figuring with all the ventilation we were getting, they would be dry by naptime.  And they were!

After another lengthy nap (that’s two days in a row!!!) I got up and made a nice steaming pot of homemade chili.  It was actually quite cool with the winds now blowing from the NW, bringing lots of wintery thoughts.  Hey, I even had to dig out my sweatpants and hoodie!  Brrr… 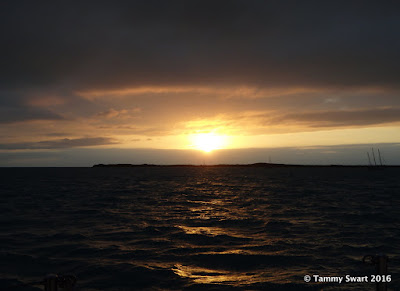 As the sun began to set, the winds began to lessen… as forecast.  It was still blowing pretty briskly but the land flattened the water and our evening was calm.  Somehow after a day spent doing very little other than reading about cruising the island of Hispaniola we were ready for bed again.

The weather forecast for the rest of the week had us confounded.  We really want to get on with our plans, especially after reading the cruising guides.  But it looked like we would be staying on here a while, and that’s OK too.  Cruising life is good.