Welcome to The Abacos

The days are flipping by fast here in the Abacos.  While crossing the Northwest Providence Channel to Abaco, we boated not one... 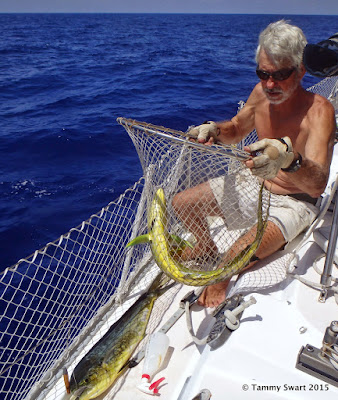 but TWO small Mahi-Mahi… our first ever!  We anchored off a beach near Little Harbour (N26°19.885, W076°59.816) after motorsailing over 50 miles and then waited while our friends on White Pepper came up from Marsh Harbour to meet us.  Bruce was so excited to see Robert he had a whole list of things he wanted to talk to him about.


We all went to Pete’s Pub for dinner where we had one of the best meals we’ve eaten since we’ve been in the Bahamas… a little pricey, but it was VERY good. 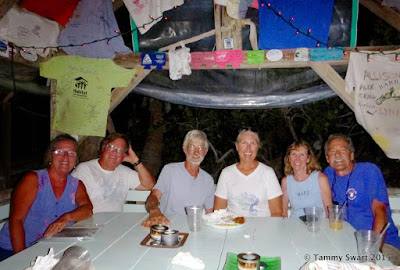 The next day we waited for high tide so that White Pepper could get out of the mooring field through the very shallow channel and headed for a more protected anchorage.  We had to skip snorkeling at Sandy Cay because the swell rolling in off the Atlantic made the reef look like ferocious teeth just waiting to slice and chop anyone foolish  enough to try it…  Will put that on our list of places to return.  With winds reaching 20 knots we choose to tuck in behind the shallow bank at Tilloo Pond. 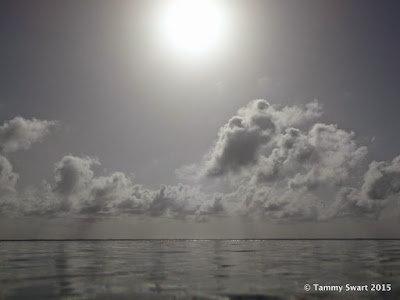 The water was nice and flat there and we enjoyed some time on the beach and a pot luck dinner aboard White Pepper.

With more wind in the forecast, we chose the protected waters of Man-O-War Cay for our next stop.  I say “chose”… in actuality, Bruce and I were pretty much just tagging along with White Pepper.  They’ve been to the Bahamas many times and knew which places they wanted to take their guests.  We had pretty much just cleared our schedule so that we were up for anything. 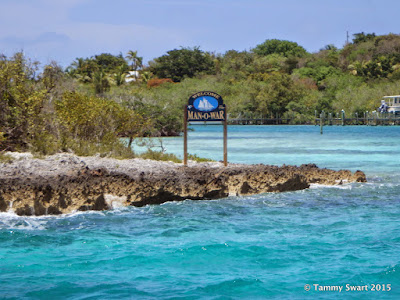 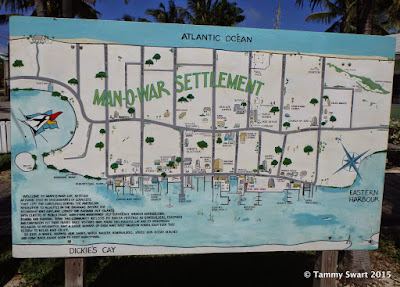 Man-O-War Cay was an interesting place.  It is very different from the other islands we’ve visited.  Different in that it was very clean and tidy, with quaint and colorful little homes lining the narrow cement streets.  The only mode of transportation on the island seems to be golf carts.  And there were a lot of them zoom-zooming around as we walked along marveling at the colorful flowers growing in the lush green yards of the residents.

The island is described as being a “God-Fearing” place.  That seems to translate to it being a “dry” place where alcohol is not sold anywhere.  No bars and no cocktails in the few restaurants.  This isn’t a big deal for us… we’ve got a lifetime supply of booze onboard after our recent trip to Jimmy’s Wine and Spirits on North Eleuthera… no, it was ICE CREAM that I crave!  Unfortunately our walk to the ice cream shop ended in defeat… they were closed!  We are getting used to the fact that “business hours” in the Bahamas… well, the concept just doesn’t exist here.

There is a small but well stocked grocery store one street up and a couple of streets over on the hill.  We stopped in to see if we needed anything.  I say that because it really doesn’t work like in the US, where you make a list of the things you need and you go buy them.  Here, you go and see what the store has to offer and then you buy the things you can use from what’s offered.  It isn’t as bad as it sounds… it saves a lot of time I would normally have spent planning meals.

It was our lucky day!  As we strolled the refrigerated aisle, I began to notice stickers on some items with big marked down prices.  A block of Monterey Jack cheese, regularly almost $6 was marked down to $1.99…  Shredded mozzarella marked $5.65 was $.99.  Cream cheese, yogurt cups… $.99!!!  I gathered a couple of each, trying not to be greedy.  The items were marked down for quick sale because they were due to expire soon.  We aren’t choosey!  We’ve been eating things we bought in the US six months ago!  We’re used to eating expired food!!!

So with our backpack full of cold stuff and others, we had to hurry back to the boat.  The folks on White Pepper returned from a trip to the beach and came over for happy hour. 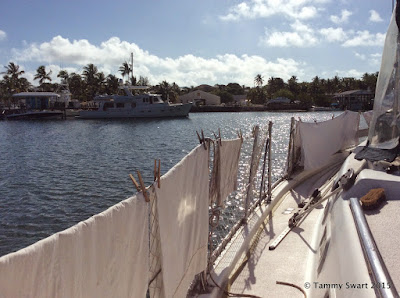 Some time in the night we had a little bit of trouble.  One of the cats had a hardball incident which, in the light of morning proved to be all over our bed.  I haven’t been to a laundromat since we left Georgetown and I carry two sets of sheets… we’re using the second set.  So, instead of taking that planned walk into town… we had to do an emergency load of bucket laundry.  While our friends zoomed off into town, we were left behind chugging the plunger into a bucket and wringing seemingly endless lengths of sheet.  We couldn’t really leave the boat until everything was off the lifelines and safely dry. 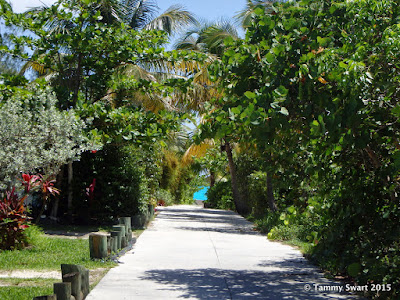 Finally at about 11 am, we were done.  We packed a lunch, parked the dinghy at the marina dinghy dock and took off on foot headed north of town.  We passed the cute little homes along the way, again marveling at how neat and CLEAN this island is.  Nowhere else have we seen such extensive landscaping and lush greenery.  There are no piles of trash.  NONE.  All of the homes are in near-perfect condition.  There are no unfinished buildings, no overgrown empty lots.  It’s very conspicuous after we’ve grown used to seeing the ramshackle hodgepodge of buildings on the other islands. 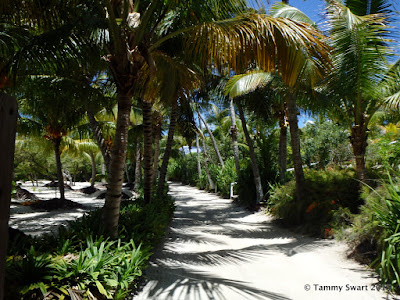 Our destination is a spot on the island where you can see the Sea of Abaco and the Atlantic on both sides.  I have no idea how far it is, I’m thinking about 2.5 miles… we walked.  The cement streets ended and were replaced by a sandy track.  The path was just wide enough for the golf carts that continued to buzz to and fro.  We would step aside to allow them to pass.  It would be tragic to be run down by a speeding golf cart at this stage in the game.

The lush landscaping continued to amaze us.  It’s as if thousands of unseen gardeners work busily night and day to keep the entire island in tip top shape.  We did see one gardener trimming the hedges along the sand street… he had a lot of work ahead of him.  Palm trees shaded our way much of the time, which was nice because we had topped the hill and were walking on the lee side of the island where it was completely still… and getting hot. 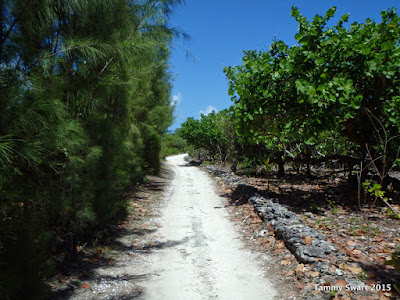 There are quirky little bungalows all along the way with cute names.  Cottages I guess.  Some must be rentals but many were homes.  Each was unique and well kept.  Of all the islands we’ve been to, this is the first where I think it would be really neat to spend a vacation… if I were into vacations, that is…  There’s beauty, there’s quiet, it would be like being lost on a deserted island for a while… only better! 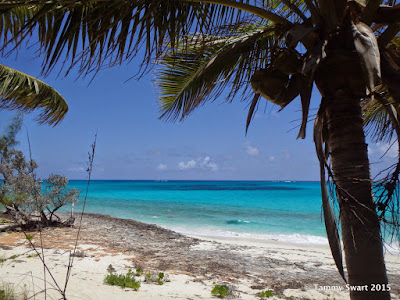 The “Queen’s Highway” turned to the right as we were just about beginning to give up on our quest.  We emerged out onto the Atlantic side with stunning views of the many shades of blue and wild white sand…  It was just breathtaking.  I told Bruce “just a little further” and luckily, I was correct.  Just around the bend was a small pavilion with seats and a picnic table.  It is sitting on a narrow strip of rock where, indeed… the Sea of Abaco, calm and placid with anchored sailboats floating lazily in the mid day sun… almost met the crashing sucking waves of the Atlantic Ocean.  It isn’t a very windy day and I can only imagine how violent this strip would be in a big blow… There is evidence of this in the piles of sea grass thrown onto the narrow road.

We sat and ate our sandwiches while the sweat dried on our shirts.  This is a place I could live….

Except maybe not.  All of this paradise… all of this beauty… seems to hide a dark secret.  Forgive me if I’m wrong, but during the short time we’ve been here…we’ve had a feeling that we are not welcome.

It started when we went to the marina to pay for our mooring ball.  We were told repeatedly that NOTHING is included in the mooring.  Boats on moorings are not allowed to use any of the marina facilities (which are meager at best).  Not the pool, not the wi-fi.  We CAN pay to leave our trash and we can buy fuel and water at the fuel dock…  The dinghy dock is the only thing we can use here.  OK so whatever…

Back to those zooming golf carts… not one person smiled or waved at us.  We have grown accustomed to the friendly faces and upraised hands offered by complete strangers… the flashing smiles and welcoming, helpful attitudes we’ve experienced everywhere in these islands… except here.  And the stunning difference?  These people are white.  All white.  The only black people here are the workers, the grocery store clerk, the men in the boat building shop… the gardeners… (all of which leave at the end of the workday on a small ferry boat) They have been friendly enough, but the white people?  Sour faces and almost no eye contact.

It’s like they really don’t want us here but can’t figure out how to stop it…  They are building a beautiful paradise.  It’s clean, there is no alcohol, no smoking… and if they could get away with it, no riffraff boaters mucking up their private world.

Now understand that I’m not trying to be judgmental or invite anyone to throw tomatoes at me when I say this… but it would seem that the general tone on this island is a bit exclusive.  It’s as if the people who live here (we saw one golf cart with the official Chic-fil-A logo painted on the side) are building themselves an insulated bubble in paradise.  They seem to want no blacks, no drinkers, no riffraff of any kind on their island.  There is no evidence of charity or welcome here. How can there be this much “frost” underneath the warm Bahamian Sun???   It was a little disconcerting!  We’re glad we came here to see this unique place, and our lunch on that narrow strip was such a lovely moment for us… but we want to go (and spend our money) where we feel welcome… and Man-O-War Cay could do a little better in the "Welcome to my island" category.  But hey... maybe if all this was MINE... I wouldn't want to share it either...!